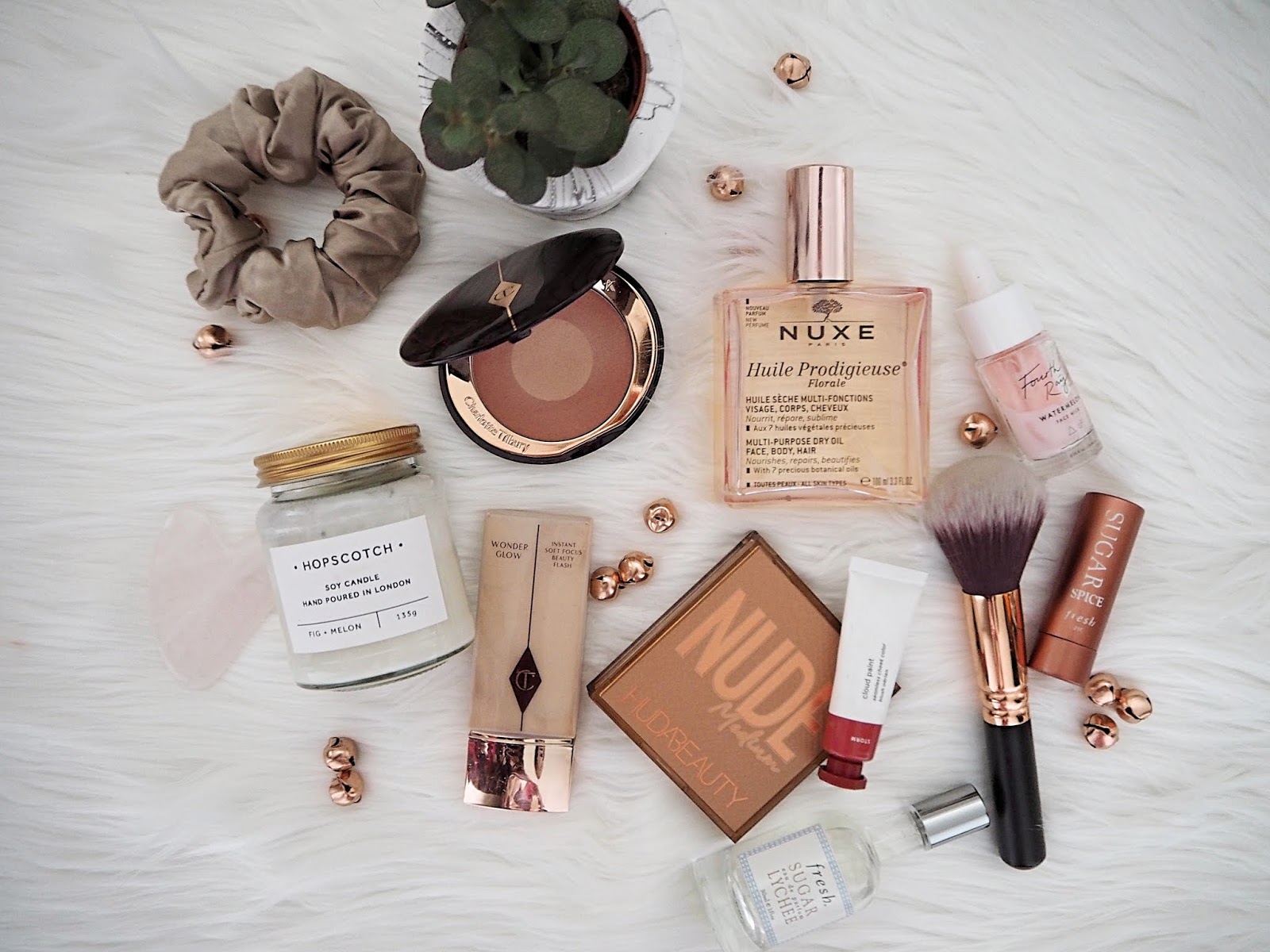 - Advertisement information: this post does not discuss gifted items or contain affiliate links. All opinions remain my own and please refer to my Disclosure Page  for further detail -
2019 is a wrap! It feels so weird to be typing that when it really doesn't seem that long since I said the same about 2018... However, looking back at this year has made me realise how much has changed! Today we're walking through 2019 for me; the goals I set myself at the start of the year, what I hope to achieve next year and what my lifestyle favourites were for 2019.

One of my 2018 focuses was very quickly resolved in 2019 and that was my job. I guess I was just a little frustrated and unsure of what my next step should be in my old role. I had gone for a position that felt like a great progression for me at my old company in December, however didn't get it and I was really at a loss as to where to go next. Seemingly out of nowhere, a really great job just sort of materialised! Whilst it was a big decision to walk away from where I'd built my network for several years and from the colleagues I'd loved working with across the country, I just felt as though I'd regret accepting a counter-offer and that all the little things I was unhappy about would persist and I'd end up wishing I'd been braver. So I took the plunge and I in all honesty my new role has been everything I was hoping for!

I'll share with you something I haven't shared with most people in my life; I did go in for my driving test this year, however I failed. It happened about 10 minutes in and I knew it had happened, though managed to keep it together and not get any other serious faults for the rest of the test. Whilst it's frustrating, I've booked it back in again and we'll have another stab at it in the new year. I will probably write a blog post on the experience of learning to drive as an adult if / when I pass, because I have so many thoughts on the topic! I'm absolutely not a natural driver and I knew I'd find it tough, so given I've always lived in cities, it's been easy to put off learning indefinitely. However I'm proud of myself for having made the effort to do this; it certainly hasn't been easy or convenient!

Probably the most significant part of 2019 for me was being in a new relationship. I met my boyfriend around September 2018 and I think it became official at Christmas, so 2019 was really the year I felt properly in a relationship. It's a different sort of relationship for me because it all feels very adult. We're both a little older, we've both been in relationships before and know what we want from it. It's exciting and I'm looking forward to the future.

Editing a book really wasn't as quick and simple as I thought it would be... Not to mention my life feels a lot fuller now in 2019. However I'm still working on it and maybe 2020 will be the year in which I can say it's in a good place and I'm ready to start shopping it around. Let's see!

I also went on some amazing trips during 2019, kicking things off with Barcelona in Spring, visiting Portugal and Lake Como, Italy in Summer and finally Budapest during Autumn. I would have loved to have gone further afield, however due to changing jobs I missed out on a lot of annual leave this year, which sucks, but for 2020 I'll have my full, more generous (compared to at my last company) holiday allocation and I'll be purchasing a few days on top of that.

#1 on my agenda for 2020 is to travel more! Myself and my boyfriend Jack are thinking Southeast Asia, as I've never been and he wants to finish his diving certification. It will only be a couple of weeks, but I'm so excited to have that experience, meet people, stay in hostels and adventure. It will definitely be a test of my packing skills and my arachnophobia. But I'm ready to go for it...

A house move is looking to be on the cards in 2020, however it's probably not going to be with purchasing a home of my own. I guess sometimes life happens and your plans change! Both myself and my boyfriend are wanting to buy soon but we also want to live together and it's a bit soon to join forces on this particular thing only a year into our relationship. So we'll just see how it goes and enjoy each other's company.

It's probably a bit ambitious to call it a 2020 aspiration, but we've actually discussed living abroad and where we might want to go. I work for a big global company, so the opportunity may arise! Whilst I'm not actively looking, I'm definitely open to any opportunities that come up. I think part of it is wanting a change and to experience something new whilst we're still young and relatively free of responsibilities. I think we're also both a bit tired of the insular, nationalist, isolationist atmosphere that's been engulfing this country over the past 3-4 years. We don't seem to be moving towards a more inclusive, equal, kinder UK and, whilst I'll never leave forever, I think I want a break and to experience a more progressive society.

Us | full review | I saw the latest horror film from Jordan Peele (who also directed Get Out) early on in the year, but it's honestly still my top pick of 2019. Great horror film aren't about gore or cheap jump scares; they're about holding up a mirror to our society and addressing inconvenient truths in a way that isn't just entertaining but gives us food for thought. This nightmare-ish story of a family's doppelgangers showing up at their home wanting to kill them does jut that!

Joker | full review | I wouldn't say this is a film I enjoyed sitting through but it's certainly a conversation starter. As probably the most debated and talked-about film of 2019; you kind of have to see it! It's pretty much relentlessly bleak and hopeless, but it's also a really interesting character study that's superbly acted and grippingly executed.

The Great Hack | full review | This is one of those documentaries that kind of blew my head off when I first watched it but it;s since slowly dawned on me that what it exposed makes perfect sense; I just never realised how widespread the conspiracy was. It's essentially a chronicling of the Cambridge Analytica scandal. Personal data mined from Facebook was used to pick out unwitting 'suggestible' people who were undecided in the 2016 US election and the Brexit Referendum. They then proceeded to spam these people with propaganda 'fake news' to turn them pro-Trump and pro-Brexit. And it worked...

The Boys | full review | This show brings something fresh and original, not only to the medium of TV, but to the superhero genre. It has great action, some gross-out moments and a wickedly dark sense of humour. In this version of the superhero universe; supers are effectively marketable 'figurehead' commodities, like your favourite sports star, but they're up to all sorts behind the scenes and a group of vigilantes set out to take them down.

Russian Doll | full review | This is another original TV show that seriously impressed me in 2019. It's a little slow to start but once it gets going it's smart, funny and meaningful. The main character is killed in a car accident on her birthday and has to relive the day over and over again, unsure of how to break the cycle, until she meets someone else in the same predicament...

The Umbrella Academy | full review | This kooky Netflix series is effectively a comic book adaptation, but it's so stylistically different to what's on the big screen (The MCU, DCEU and others) it almost sounds odd to put them in the same genre. It's a complex story that goes off on various tangents but ties up quite nicely in the end. Not only is it addictive and watchable, but it's very funny and the cinematography is offbeat and unique. The story follows a group of estranged superhero siblings, brought back together after the death of their father.

I'll Be Gone in the Dark by Michelle McNamara | full review | This is a must-read for any true crime fan. Writer Michelle McNamara (who sadly passed away back in 2016) spent years of her life obsessing over the unsolved case of the Golden State killer and this book follows her research into the case and her work in trying to figure out who wreaked havoc in California for over a decade (with a string of burglaries which escalated to rape and then murder). I just love Michelle's writing style and I think any true crime obsessive will relate to her deep need to know who did these things. Sadly she wasn't alive to see the suspect apprehended in 2018 but the story of how they tracked him down is also pretty fascinating.

The End of the World with Josh Clark | full review | This is a really interesting podcast exploring both the scientific and theoretic possibilities of how our planet could meet its demise. It's a little terrifying but also incredibly fascinating to dip your toe into it. It discusses everything from environmental apocalypse to biotechnology. It's a must-listen to any science fiction fan.

The Dropout | full review | This is such a gripping story, I couldn't stop listening to the podcast! By now, you've probably heard the name Elizabeth Holmes, but in case you've been living under a rock; she became the youngest female billionaire ever off the back of a huge fraud. She managed to silence critics and get vast investment for her 'miracle' blood test system that never worked... It's compelling listening!

What have been your highs, lows and favourites from 2019?