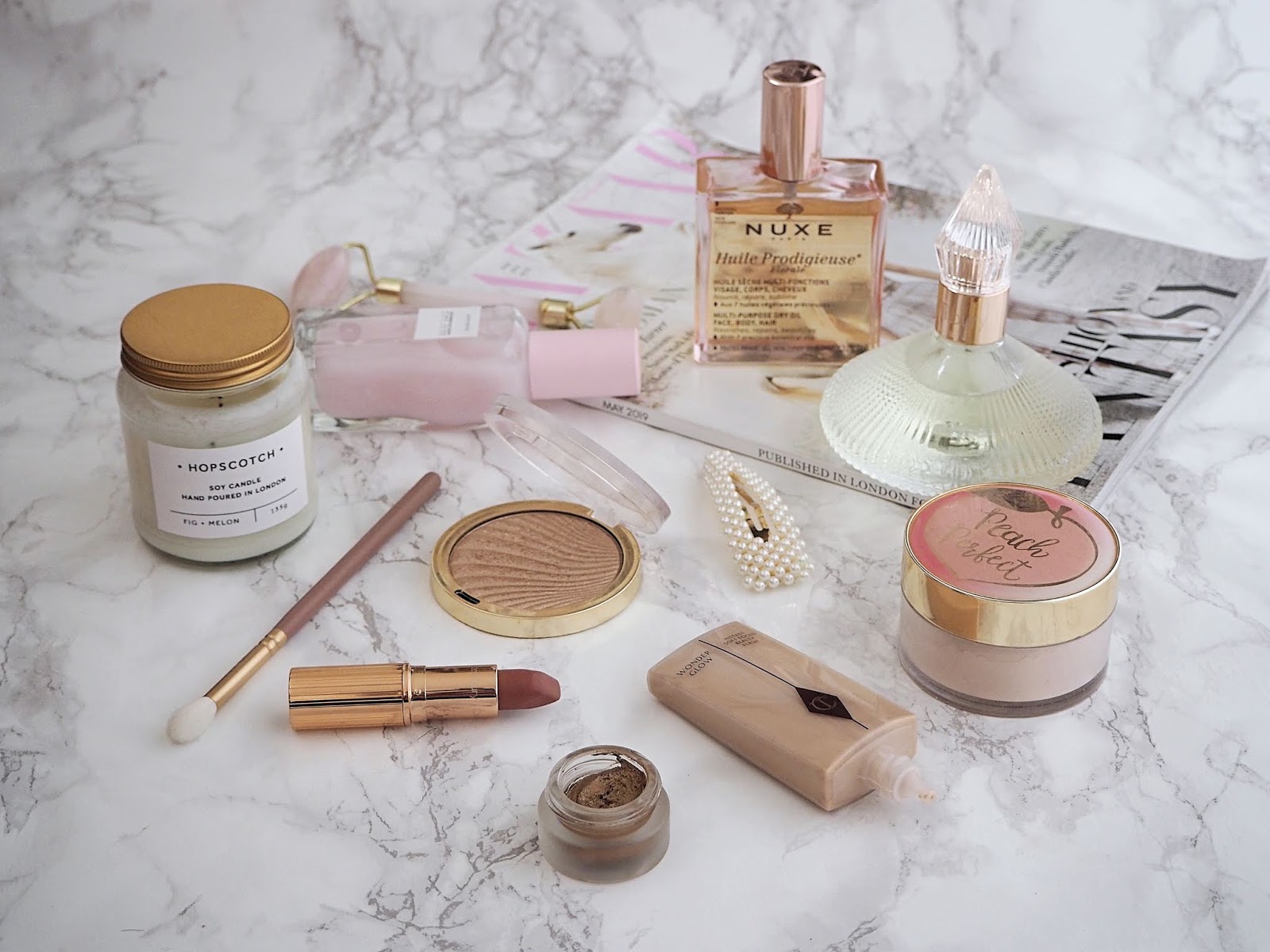 - Advertisement information: this post does not discuss gifted items. My blog has Skimlinks and RewardStyle installed to automatically monetise purchases of products I link on my blog, therefore my content may contain affiliate links. All opinions remain my own and please refer to my Disclosure Page  for further detail -
I can't believe we're almost at the end of another summer! As always - I've been up to lots and have plenty more coming up. Today I'm sharing the highlights, as well as my lifestyle favourites of the moment.

Back in June it was my birthday and we benefited from some gorgeous weather! The weekend before; my friends came to Birmingham for a meal at my favourite local restaurant Zindiya followed by a few drinks. It's such a good restaurant for Indian street food - you can just order loads and share it. It's affordable, so tasty and has a great vegetarian selection. It's always good to catch up with the girls and do what we do best; eat and drink our way around whatever city we're in... It was a bit of a birthday marathon, in all honesty! As I mentioned in my present haul post; on my actual birthday my boyfriend surprised me with a trip to the beautiful village of Painswick in the Cotswolds - it was so lovely and the sunshine made it extra special. Then the weekend after we went back to see my mum in Manchester and just hang out in the city. My boyfriend isn't from there and doesn't know it well, so I gave him a little tour of my favourite sights and hangouts. We finished off the weekend with a delicious veggie Sunday roast at one of my favourite places in Ancoats - Elnecot.


I also spent a lovely day in Bristol with friends a couple of weeks back. It was a friend's birthday and the legendary harbour festival was on, so we soaked up the sun, drank beer and cider and had a BBQ. Although I don't have as many ties to the city as I used to - it was great to see some old faces and meet some new ones. I honestly had such a nice time and I think - at the ripe old age of 26! - sometimes I assume it won't be easy to meet new people but that day definitely proved me wrong. If you've ever felt like that my advice is: say 'yes' to everything! Don't worry about being outside your comfort zone or not knowing many people at a party - just put yourself out there and you'll be pleasantly surprised.

I also recently visited Tavira in Portugal with my mum, which is a bit of a hidden gem of the Algarve. Whilst most British tourists head west from Faro - Tavira is further east (so much so that you can go on a day trip to Seville from there). It's such a pretty town - it isn't one of those places that's full of hotel complexes and less than a square mile of the old town - it's lovely throughout! It was such a relaxing break and I found it so nice to switch off and spend some time with my mum. You can have a little look at my travels with some personal shots and sharing my beauty essentials by checking out my Instagram updates.

This summer I've also tried a good few new places that have opened up in my city. The first new thing I gave a go was Rudy's Neapolitan Pizza, which you may recognise if you're from Manchester. Myself and my boyfriend are really on it when it comes to finding deals and free things online and I spotted on Instagram that you could sign up during their launch for free pizza! I thought the pizza was really tasty (that fluffy base and crust...), affordable and there were also vegan options. Afterwards we went to meet friends at Flight Club - a fun, modern take on darts. I've never played darts in my life (full disclosure) but it was so much fun! You can choose from an array of games and just have a drink and a laugh. I think I maybe even improved by the end... Lastly, I wanted to give a shoutout to a great new place near me in Moseley that has just opened. Peacer and Katsu are two new affordable restaurants in the same building. We went to Peacer - a pizza place with amazing, creative veggie pizzas available by the giant slice for just £3.50! I really liked it and will definitely be visiting again...

Another great experience last month was my first ever Bongo's Bingo. How do I describe this event...? Well, it's bingo with a twist. A boozy, musical, potty-mouthed twist. There are constant musical cues (think calling the number 56 = '5678 my bootscootin' baby...') where everyone gets up and dances on the benches. If you shout bingo and you don't have the right number of lines: the word 'shame' will flash up on the screen and everyone will chant at you or the MC will start singing 'why you always lying...?' It was such a laugh and I just enjoyed a night out with a crowd where the average age isn't 19! Despite being soaked in beer and needing to shower as soon as I got in from the sheer sweat and grime from everyone and everything around me - I would definitely go again. It runs in a bunch of cities across the UK so if that sounds like your bag - definitely go and check it out!

Finally - I've been lucky enough to go to two weddings in the past fortnight. The first was my boyfriend's sister's ceremony and reception at a lovely barn in Shrewsbury. It was great to just meet everyone, have a laugh and dance until the early hours... The entire day was so much fun and it all came together beautifully. On Friday we headed over to Northampton for the wedding reception of two friends from university. It was honestly surreal seeing two people who met during Freshers week at one of my flat's infamous pre-drinks tie the knot! And so kind of them to invite us along. It was absolutely lovely - the venue was incredible and they're so good together that it made me feel seriously soppy... I have a few photos from both weddings on my stories and feed over on Instagram if you want to take a look. For those liking the dresses - the first was the Chi Chi Bryony Dress and the second was the ASOS Design Embroidered Midi Dress with Lace Trims (which is on sale and selling out!)

Airpods | I've never really seen myself as the person who needs to have the latest gadgets. I actively resisted Apple trying to force me to by AirPods by changing to the single Lightning slot on the iPhone. However - for whatever reason - this summer I gave in. And yes: I love them, though it pains me to say it! I honestly can't tell you how liberating is is to feel unrestrained by wires. You can definitely find cheaper wireless headphones, but if you haven't already noticed: I'm a huge Apple sucker.

Knock Down the House | In these times of political bleakness - this Netflix documentary shows a pinprick of light at the end of the tunnel. It charts the stories of a number of outsider, crowd-funded US governor candidates - focusing primarily on Alexandria Ocasio-Cortez. If you don't know who she is: Alexandria was a 28 year-old bartender / waitress from the Bronx, New York when she was nominated by a relative to run for Congress. The rest - as they say - is history... It really is such an empowering watch and it inspired me so much to see 'normal people' challenging the elite for their positions. I can only hope that a similar movement can come about here in the UK.

The Dropout | This is one of those podcasts that has a sort of 'morbid fascination' quality to it; like slowing down to look at a car accident. Elizabeth Holmes was the self-proclaimed 'female Steve Jobs' and the world's youngest self-made billionaire with her Silicon Valley healthcare startup Theranos. Her revolutionary device claimed to run hundreds of health checks from a single drop of blood and was due to be rolled out across hundreds of US drugstores. Except... it didn't work! This podcast tracks how this fraud came to be; from the cult of silence at Theranos to Elizabeth's carefully-created public persona. It's both fascinating and repulsive...

Chernobyl | There's something bizarrely gripping and fascinating about a historical drama - whilst we obviously know how this one goes (removing some of the narrative tension), the brilliant production and the sense of impending dread more than make up for that. Chernobyl was an infamous nuclear power disaster in the USSR during the 80s and this series tells the story from a number of perspectives but primarily we follow the ill-fated scientist sent in to try and control the damage whilst the government attempt to keep a lid of the extent of the devastation. It's smart, brilliantly acted and will leave your stomach churning...

21 Lessons for the 21st Century by Yuval Noah Harari | My boyfriend recommended this book to me a little while ago and I finally got round to checking it out whilst I was in Portugal. Harari is the author of the book Sapiens - which I've talked about before on this blog and really enjoyed. Whilst Sapiens was a quick, concise overview of human history, this book looks more towards the future and the present. It's definitely more of a 'food for thought' book - if you're looking for concrete answers or to agree with everything covered, you might be disappointed, but it's a great jumping-off point. I was already familiar with a lot of the topics mentioned - having studied Philosophy in my previous life - but I think it's great to introduce them in a digestible way to the layman. It talks about everything from AI to Nationalism to Universal Basic Income to war in the 21st century. It's a pretty quick read and well worth checking out.

What have you been watching, reading, doing and listening to this summer?