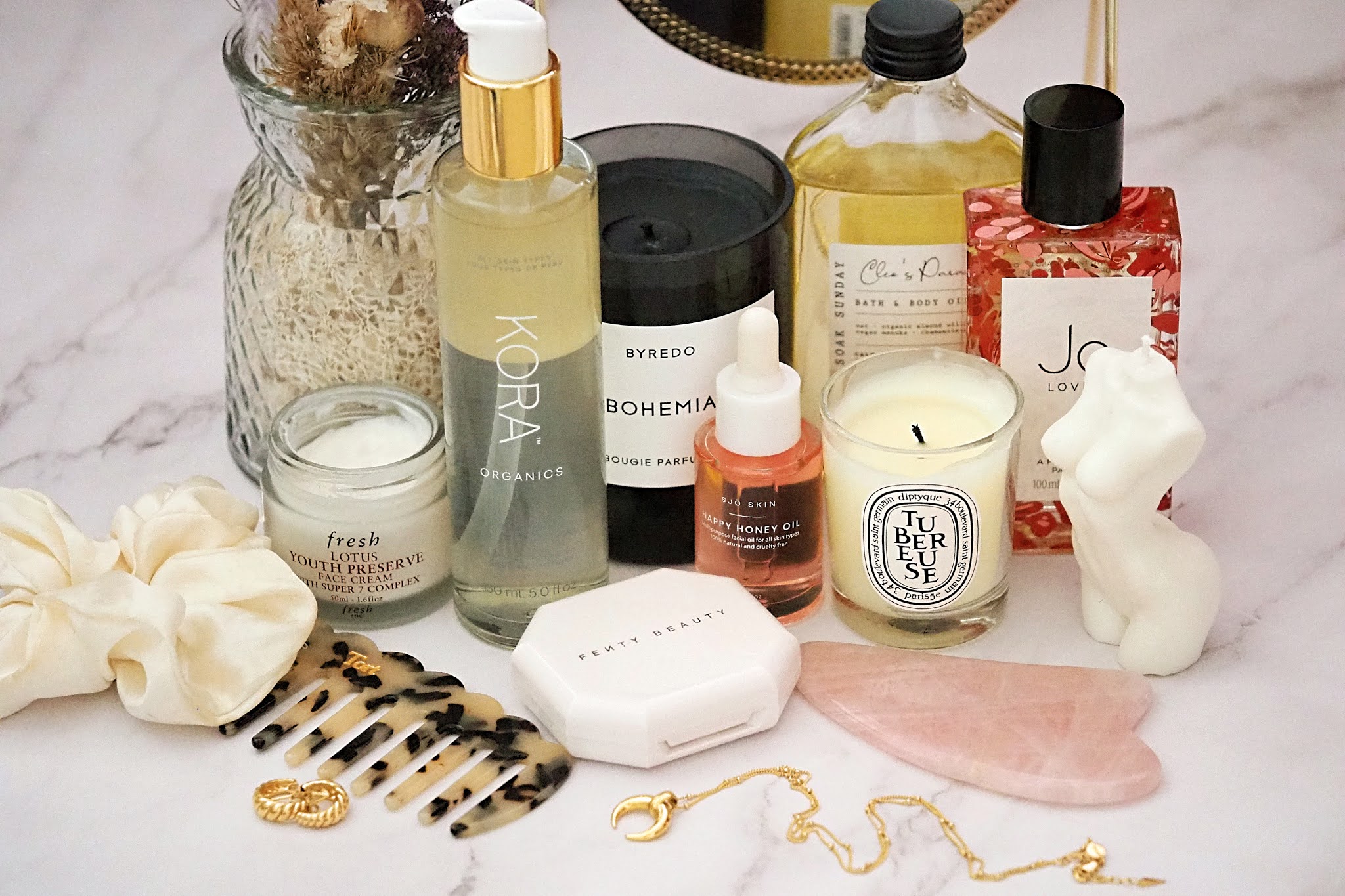 - Advertisement information: this post does not discuss gifted items or contain affiliate links however gifted products may be included in the image. This is for illustrative purposes only and is not an endorsement of any specific product. The experience marked * was gifted to me with no obligation. All opinions remain my own and please refer to my Disclosure Page  for further detail -

It's been a while since I've done one of these posts, mostly because I've not been up to much! But, we're back today with what's going on in my life and some of my favourite (non-beauty) things...

Things are getting back to normal here in the UK - obviously there are a few things that need an eye kept on them - but the signs seem to be good because although we are seeing increased cases, hospitalisations and deaths have stayed very low. Do I think clubs will be opening on the 21st? Honestly, I don't think so; delaying whilst young people get their vaccines (I had my first dose yesterday!) seems to make the most sense. We aren't out of this but it's honestly been so good to have some semblance of normality. I've missed my life so much!

My first little venture out was visiting a friend in Oxford for a wander down the canals on a lovely day, and we had a really great meal before I headed back for the train. If you're ever in the area, I really recommend the Old Bookbinders Ale House. It's a pub-come-French-restaurant; strange combination but trust me, the food was delicious! You don't understand how amazing 'mushroom ravioli' can be... And not long after, it was my birthday. It was a pretty action-packed Bank Holiday weekend: I caught up with my mum for brunch, I had cocktails with friends at Couch, a film-themed cocktail bar we're a bit obsessed with at the moment, we got lunch at Lasan the following day (in the Jewellery Quarter), and had some amazing cocktails and shared lots of Indian small plates, there was more eating and drinking on the Sunday, a visit to the Winterbourne Botanical Gardens on the most beautiful day of the year and a little jaunt to a cottage outside Shrewsbury in the sun, where apparently a man who lived to 150 lived... So, yeah, that was basically the most money I've spent on having fun in about 18 months! I honestly had such an amazing time and I'm so grateful to have spent that time with my loved ones.

The day after my actual birthday, I had my driving test. Not great timing, but given it had been delayed from January due to COVID, so I decided just to stick with that date because it was at a decent time of the day. The sun was shining, I got the right reverse manoeuvre and the rest is history. I passed! At last! If you want, I can write a blog post on my experience, as it was a long, often really testing journey for me, so if I can help anyone else by sharing my story then I really would love to do that.

Then last weekend I headed home to Manchester for the first time in a good while. The weather was gorgeous so we went for a walk locally in the Daisy Nook country park for a few miles then for afternoon tea. There's so much going on in the city at the moment; despite COVID, it feels like every time I go home there's a new crop of restaurants and bars. Before I headed back home, I got lunch with my mum at a new place on Deansgate called Motley (I believe it's downstairs from a hotel); the food was really tasty, there were lots of plant-based options and the cocktails are *chef's kiss*.

The Witch | This was a surprisingly-good find: it's a horror film, I suppose, but one of pervasive psychological dread more than jump scares. It's set in 17th Century New England when a family is banished from their Puritan colony. Anya Taylor-Joy plays the eldest daughter, whose burgeoning womanhood is treated with suspicion by her family, as they fall on bad times and begin to believe she's a witch. It's a sort of feminist parable with a stonker of an ending...

Call Me By Your Name | I've finally seen this film after years of hype, and I honestly loved it! It's a very simple story of a summer romance between a teenage boy and his father's research assistant (I get that some people find the age gap a bit... hmmm... I get that, though I also feel that the appearance and actual ages of the actors offsets what we know it's 'supposed' to be from the book it's based on) in Northern Italy. You get all these beautiful sensual shots of the lush scenery and the sense of excitement and longing of first love [SPOILER] and ultimately loss. It's a snapshot in time of perfection that changes both characters but has to remain a memory. It really makes you feel something.

Derry Girls | I honestly have no idea why I didn't watch this sooner! It's such a quick series to get through, with just 2 currently out with out at 6 episodes out apiece, so I really do recommend checking it out. It's obviously set in Derry, Northern Ireland, during the tail-end of the Troubles in the 90s. It's also side-splittingly hilarious and a great slice of 90s nostalgia. It's teen girls doing teen girl stuff, worrying about teen girl things, but with the backdrop of sectarian violence. It's equal parts fun, joyous, heartwarming and nostalgic.

Chewing Gum | Again, I've been slacking, and again, I polished this off pretty quickly! This is a surreal comedy by the now-legendary Michaela Coel, and I won't lie: it'll take you about 15 minutes to get onto its semi-psychedelic level, but once you are, it's a lot of fun. Tracey is in her early 20s, living at home with her very Christian West African family and working in a corner shop, and Chewing Gum charts her mishaps in trying to dive into the world of boys...

Feel Good | I actually only discovered this show in 2021 because a new series came out and Netflix bumped it up to the top of my suggestions, and what a great find it was! It's a semi-autobiographical comedy-drama based on Mae Martin's life experience of coming to the UK from Canada, trying to make it as a comedian, struggling with past addiction issues and a romance with ostensibly-previously-straight George. I loved this show; it made me cackle, I loved the characters, it handles its more serious themes and moments with sensitivity and I really felt so much investment in the story (plus Lisa Kudrow was such a welcome surprise as Mae's mum).

Dr Foster | At times, this is a ridiculous melodrama, but it's so darn gripping that I can honestly forgive the fact it stretches the limits of believability on several occasions! One night I think I stayed up until about 2am because it just kept hooking me into the next episode and I couldn't stop... The premise is that Dr Foster is a seemingly happily-married GP with a son, in a small town full of gossip. She slowly begins to suspect her husband of having an affair. Let the mind games begin!

Made on Demand* | This is an online platform by the wellness centre at a spa I've visited many times (on my own dime!): Moddershall Oaks. It was launched during lockdowns and has a whole host of different fitness classes including yoga, HIT classes, barre and also meditations and lifestyle tips. It's all there for you to enjoy as and when you get a minute! I absolutely love their bite-sized 10-20 minute yoga sessions; I often do them in the morning before work or at lunchtime, as it's easier to fit in around my job. Occasionally I'll go for something higher-intensity and the meditations are great for winding down before bed.

Natives by Akala | I actually started this last year but then re-started it on Audible this year. The first 1/4 is a tad slow, but stick with it: it's an incredible read once it gets going, and listening to the audiobook narrated by Akala adds an extra dimension to the experience. This is essentially a polemic on race in Britain by the rapper and poet. It's a mixture of historical context and personal experiences with anecdotes on identity and an exploration of Britain's stubborn denial of its colonial past. Not only is it a fantastic read in and of itself, but I think this could be an amazing jumping-off point for people to read and learn more about their own history, about British history, about Black history and our own unique relationship to the issues covered. I really do appreciate the current wave of writers and thinkers focusing on this topic; for so many years we've had such an American understanding of what Black history is, and - in many ways - our context is entirely different and I've been enjoying filling in the gaps that the education system unfortunately left me with.

What have you been up to since restrictions have been eased?