The Problem with Drugstore Foundation 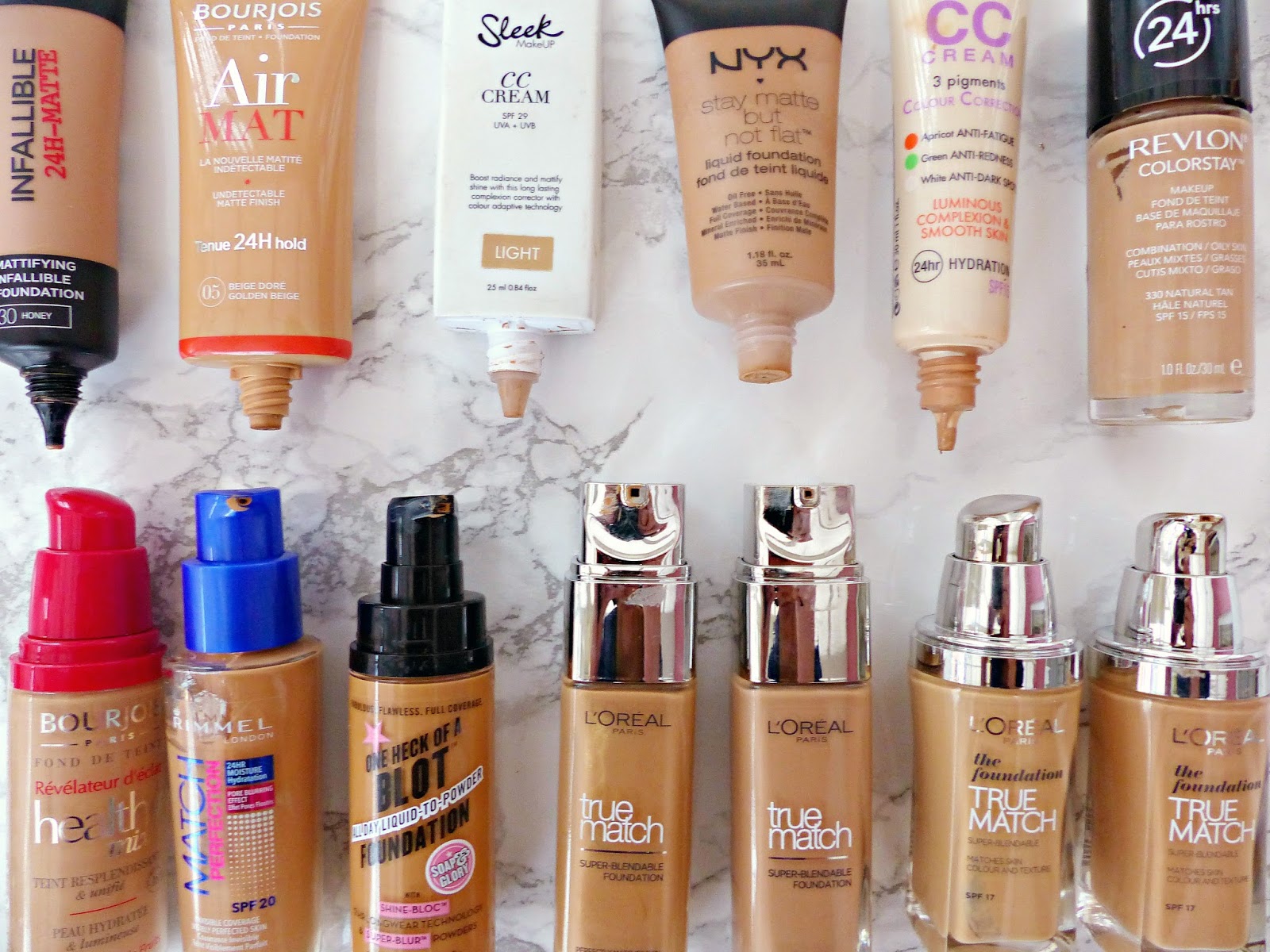 I'm picking up my fourth bottle of L'Oreal True Match, hoping that this will finally be The One. I tell myself I can just mix it. Surely some combination of the shades I have will give me the True Match I'm after?

The mission was simple: find a drugstore foundation that I was happy to wear. It didn't have to be Holy Grail status, it didn't even need to be one I'd reach for over my high-end products; it just had to decent enough that I wouldn't feel self-conscious or uncomfortable wearing it. However it became something much bigger than that.

I've not really struggled much to find a match in high-end foundation and my only mishaps have really been with ordering online. I'm not saying my favourite brands will definitely cater for every single skin tone but they try. It's unfair as not everyone can afford to spend £30 on foundation every couple of months. I have a medium-warm skin tone but in the 50% of cases where drugstore foundations have a shade dark enough (I'm usually the deepest one they offer), they simply don't seem to understand the importance of undertones. Or they do with most shades but when it comes to darker shades it all goes out of the window. And don't forget: pale people have pink undertones. Always. They often tack on a shade miles darker than the next lightest that's invariably neutral or pinkish in tone as if that's adequate.

The drugstore has come on a lot in recent years but they still don't seem to want to cater for me, as someone who is pretty much slap bang in the middle of the colour spectrum. Instead of developing yet another neutral eyeshadow palette, why not invest in researching how to create wearable foundation shades for more skin tones? The only way I can walk into Boots and buy a good foundation in the right colour is to head to the Estee Lauder counter and that sort of defeats the point! At best brands like Bourjois and Rimmel treat women of colour like an afterthought and at worst they treat us like we don't exist.

The most annoying part is that in many cases the brands do have a wider selection in the US but it doesn't translate over here. Personally, the argument that they're 'the most popular shades' doesn't wash with me, as they've never even trialled anything else. The shades for caucasian skin (that's not too pale and doesn't have especially strong undertones, either warm or cool, obviously!) are inevitably going to sell because it's a self-fulfilling prophecy. Many women have long given up on the drugstore because it simply doesn't want to sell to them. Obviously if I could get a great foundation for less than £20, I would, but these brands have sent out the message that they don't want my custom. As you can see from my stash (bearing in mind these are the ones that looked ok-ish in the shop and didn't get passed on right away), it's not through lack of trying!

I've decided once and for all to put my money where my mouth is. Buying products I know aren't right is rewarding these brands for only catering to a very narrow range of skin tones so from now on, I won't be doing that. The best way to vote is with your wallet and if brands start noticing their sales declining, they won't have much of a choice but to listen to people. As a bit of depressing fun, I've come up with this highly scientific chart to display the problem! 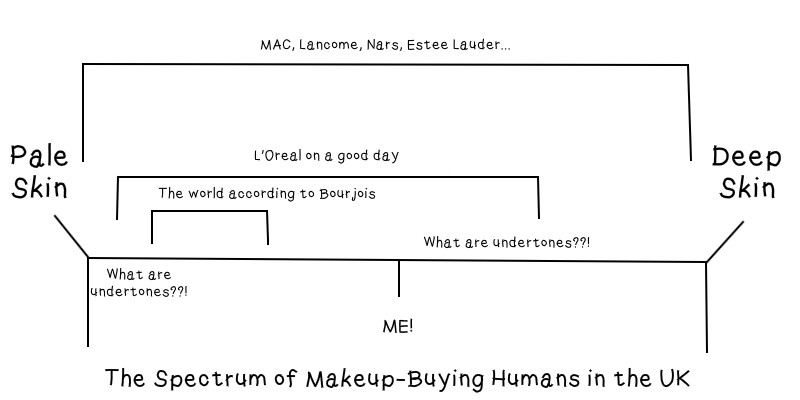 I don't want to bash L'Oreal too much as they do seem to try a bit in their True Match range. However even within that range, the allegedly warm-toned 'w' shades stop being warm at all after around shade 4 and are pinkish or neutral colours from there onwards, which makes no sense whatsoever! I have W4 and N7 in the old range, N6 and W6.5 (as W6 doesn't seem to exist...) in the new range but none of them or any combination of them is quite right. The  The Lumi Magique foundation comes in just a handful of shades, all of which are quite yellow in tone. The darkest or second-to-darkest shades seemed the closest match to me. The Infallible Matte has to be the worst offender, however. I wear the darkest (30 Honey) of the tiny number of shades and it's so pink-toned and so much darker than the next one down that it looks extremely 'off' on my skin and mixing the shades isn't an option.

This is a brand that does sort-of ok(ish) when it comes to light and dark shades but doesn't seem to 'get' undertones at all. All of their foundations are neutral and pinkish in tone. I have the Colourstay for Combination/Oily Skin in 330 Natural Tan and the formula is superb, perhaps the best in the drugstore but it's let down by the shades (bizarrely the colours in the Normal/Dry Skin version don't even match up to this range). Worryingly, I've also noticed my local Superdrug seems to now only carry the lightest 4 shades on the Revlon stand.

One of the rare US import brands whose shade selection has come across the Atlantic with it! It's not really a drugstore brand unless you live in Manchester (I believe this is currently the only place to have a NYX department in Boots) but I'm struggling here... All their products seem to come in an ok-ish number of shades and I was just a tad darker than the middle shade in the Stay Matte But Not Flat foundation (despite the name sounding very appealing, the formula was disappointing).

Rimmel's shade selection varies wildly depending on which product you pick up. Many of them I never even gave a chance as I swatched the darkest shade only to see it was still too light. I only have the confidently-named Match Perfection, in 402 Bronze. Needless to say it is not 'perfection' for me as it's a too dark and the next shade down is miles lighter.

Bourjois seems to churn out new foundation formulas that come in about 5 shades every other month. Their efforts would be better spent expanding the colours in the foundations they already have. A lot of people complain that Bourjois foundations are too warm. All the shades I have from them are either the darkest shade or second-to-darkest shade they do and they're always very neutral in tone and much darker than the next lightest colour. Air Mat is probably the worst offender (I wear 5 Golden Beige) as 3 of the 5 shades all look pretty much the same! They're also all quite orange in tone. Even the cult favourite Healthy Mix (I wear 56 Light Bronze) is pretty poor. It seems to come in a lot of shades but they're all clustered in a very narrow segment of the spectrum. Finally there's the CC cream, which I wouldn't expect to come in as many shades but again I'm the darkest out of a colour selection I could count on the fingers of one hand. Sorry to be repetitive but again 34 Bronze is too neutral and considerably darker than the next shade down.

I've never been able to buy any of their bases as they're all miles and miles too light. I did get the Lasting Perfection Concealer though (the darkest shade, of course...) and it's way too pinkish in tone for me.

Although I've included options from Soap & Glory and Sleek in the image, they don't really do many base products so I felt like I couldn't make a reasonable judgement on them. Soap & Glory does one foundation that comes in a disappointing 5 shades, however it only came out a couple of months ago so I sincerely hope this is going to change. I have the shade Caramel, which is ok on me. Sleek no longer do a proper foundation, just a CC cream, which has an ok colour match for me (Light). It doesn't come in that many shades but seems to cover a decent amount of the spectrum within that. Maybelline and Max Factor seem to have ok selections in terms of light to dark in most of their products. However, the undertones of their bases are erratic. You can pick up one shade that's a bit too light but has the right undertones, go up a shade and it will have completely different tones to it. For that reason I've never found a decent foundation from either of them that even looked ok enough in the shop to give a try.

I feel as though the situation hardly ever gets talked about, it just seems to be something we accept. This was a topic close to my heart but it still took a lot for me to post my thoughts. At the end of the day though, being true to myself and sharing these experiences is far more important that 'brand relationships'.

So now it's over to you. I'd love to hear your thoughts in the comments but I'd also love you to tweet me your experiences of trying to find an affordable foundation that matches (whether you're pale with yellow undertones, brown-skinned with reddish tones or anything in-between!) Make sure you use the hashtag #DrugstoreProblems so I can go back and read through it all in one place.

I wouldn't normally say this but given the pretty damning findings in this post, if Boots, Superdrug or any of the UK arms of specific brands highlighted in this post would like to respond then please do. My email address is jasminestewart1193@gmail.com and I'm more than happy to share your responses with my readers.

What's been your experience finding a decent drugstore foundation?