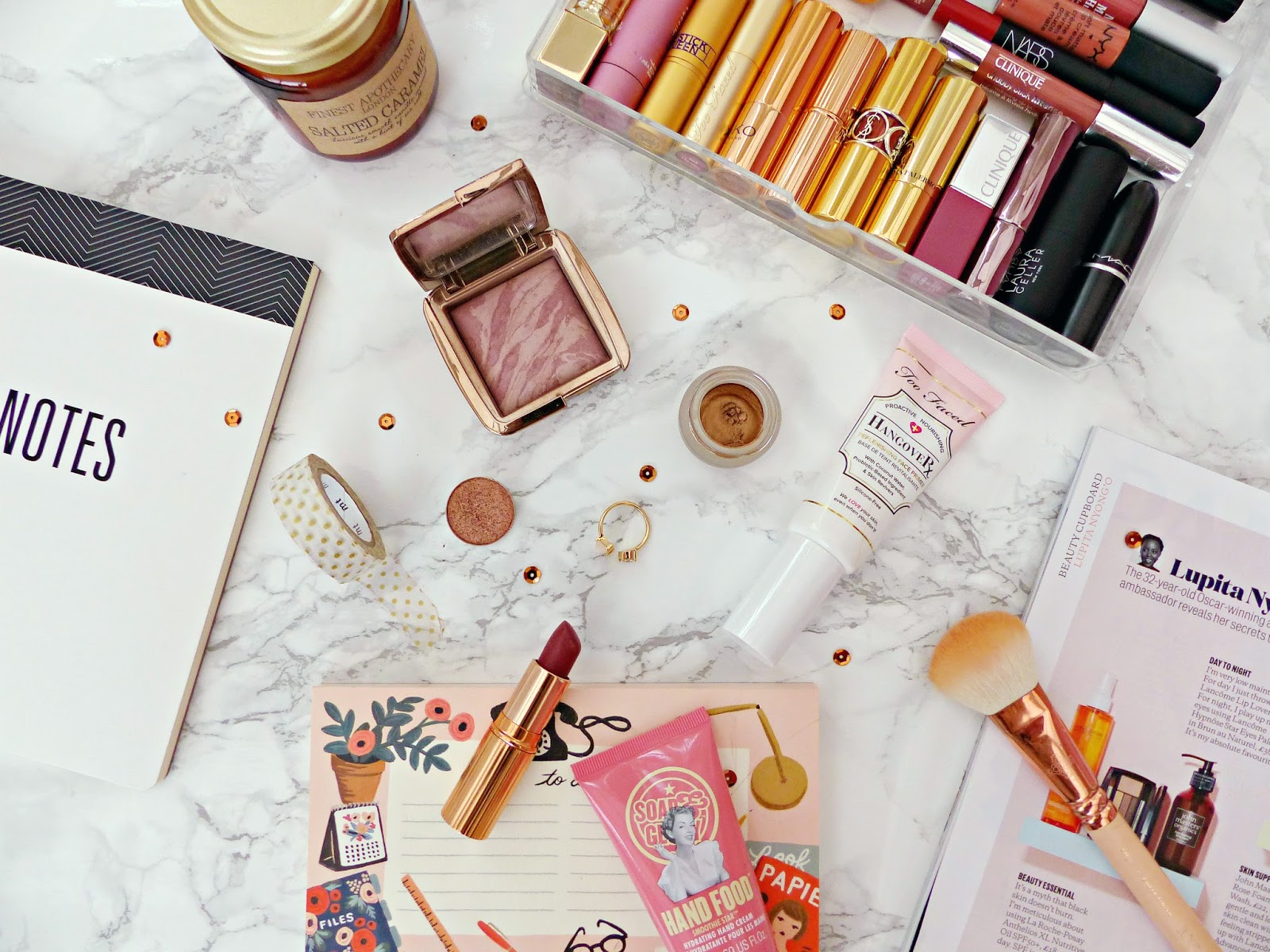 It hasn't been that long since we last talked but I feel like so much has happened over the past month, I really wanted to share it with you!

As I mentioned in my recent post, the past month has been madness in blog terms. I'm still half-expecting to log on one day and have the same number of followers I did before! As I mentioned last month, after being in a couple of Bloglovin Beauty emails in November, a post was then featured in the Bloglovin Edit. It's kind of just snowballed from there... I'm honestly so overwhelmed and although I know the growth will slow down, I'm enjoying it whilst it lasts.

I've been working hard on my blog over the past year and whilst I appreciated every single person who visited and liked it enough to click 'follow', the recognition I've got recently has been incredible. I've genuinely gone from a little over 2000 followers (with there definitely being days, even weeks where I gained little or no new ones) to over 12,000. I was expecting some exposure from the feature but not that much...not even 1/10 of that much... Thank you so much to everyone reading this and for everyone's kind, supportive words about this!

What I Got Up to Over Christmas and New Year

Firstly, it was lovely to see so much of my family on Christmas Day itself, as it feels like ages since we last did that. It was also great to spend some quality time with my boyfriend and his family. We usually see each other on the weekend and it goes so quickly. This time round we could have lazy days, we could have days when we did loads, we could have days where we went off and did our own thing.

I also loved getting together with my girls around the New Year. Whilst I'd seen pretty much all of them individually quite recently, we've not all been together in one place for about a year. One of my friends also just got back from travelling around Brazil so it was so good to catch up with her. We managed to eat, drink and shop our way around London in a couple of days! Me and my boyfriend went to a party with my friends in London for New Year's Eve and as it was a bit of a last minute, ordered my dress on ASOS premiere a couple of days before kind of thing, I didn't have many expectations. However it turned out to be such a great night! I got chatting to so many random, interesting people and there were a few blasts from the (uni) past that made me feel quite nostalgic. It definitely beat paying £50 to go to a packed club and having a let-down of a night!

What I Ate and Did

I finally tried the breakfast at Bill's whilst I was in St. Albans (the veggie version, of course!) and it really is worth the hype. My stomach is rumbling just thinking about it... I also went to Balthazar's with the girls, a French restaurant in Covent Garden, which was lovely (we had brunch). Whilst I was on time and everyone else was late (as usual) I had a look round the amazing Charlotte Tilbury boutique store and did a little Kikki K haul... When we went to Westfield in Stratford (which obviously meant lunch at Giraffe, one of my favourite chain restaurants) I also visited Inglot and put together my own palette.

At the end of 2016 I watched the whole of Narcos and I absolutely loved it! It's the story of Pablo Escobar's journey to becoming one of the most dangerous drug lords in the world, told partially from an American DEA agent stationed in Columbia. It's pretty brutal at times but it's incredibly well-acted. I don't know a huge amount about the ins and outs of what happened in Columbia at that time so for me it was full of twists and action, keeping me on the edge of my seat.

And Then There Were None

This was a fantastic 3-part adaptation of the Agatha Christie novel where a group of very different people are all lured onto a remote island, where it transpires they've all in some way had a hand in killing someone. Then, one by one, they start to get bumped off in ironic ways. It's pretty much everything you'd want in a murder mystery; there are some big surprises and it's just overall very entertaining (so catch it on iPlayer if you get the chance!)

This is already one of the highest-grossing films of all time! I have to admit I've never seen a Star Wars film before in my life so I was going into this blind but with an open mind. I wasn't wowed by this film, it was decently entertaining but not one I'd see again. It was quite a fun film with some great moments but overall it just fell a little flat for me after all the hype. I think this is probably more one for the fans than the casual viewer.

I was not expecting to love this film like I did, but it honestly had me in tears at times! Amy is a bit of a party girl who writes for a lads mag and after being sent to interview a sports doctor, she and this 'nice guy' start dating. Amy Schumer is absolutely hilarious and her character is so relatable. It's definitely something different to the usual romcom with a female main character and I love it - I will definitely be checking out Amy's standup and TV work.

I don't know how but Pixar always seems to come up with the most exciting, imaginative concepts for their animated films. This one is set inside the mind of a young girl from childhood through to her pre-teen years, when she is thrown into crisis by moving to a new city. Her memories, emotions and thoughts are brought to life in such a smart, creative way. It was so funny and I appreciated the grown up jokes thrown in there too. It also may have made me shed a tear at one or two moments. This is one of the best and most intelligent children's films I've seen and I thoroughly recommend it.

I actually never saw this at the cinema as I thought it would be beyond awful. But on Christmas Eve we had this on DVD or it was on Sky Movies so we decided to watch it. I actually ended up really enjoying this in all its dinosaur-y action silliness. It's actually hugely entertaining and a great instalment in the franchise.

This was a bit of a 'Sunday afternoon, fancy having something on TV' thing for me. It's a sort of Dickens prequel/crossover that has characters from all of his major works interacting in London at the same time before the main events of their respective books. It's nothing groundbreaking but it's well worth watching (it's also in easy-to-view 30 minute episodes) and it's especially entertaining for people who have read his books to see how things unfold and lead up to the story lines in his books.

Pretty much overnight, everyone seemed to be talking about this Netflix documentary series. I didn't know much about it before marathoning it in a weekend, which is the best way to do it! Over 10 hours it tells the story of a very complicated murder trial through archive footage, police reports, recorded phone calls and courtroom footage. I won't tell you any more, as you really need to see this for yourself. I was so engrossed in the detailed, thorough story and its background. It isn't an easy story to witness but if you're interested in true crime, courtroom cases and police procedurals then definitely watch this.

Realising Just How Much Work I Have to Do

In terms of my CII studies, I took a bit of a break over Christmas and New Year but since starting back at work for the new year it's really hit me just how much I have to get through between now and the end of April especially! I have exams, coursework, internal exams and obviously the 9-5 aspect of my job so I'm trying to be super-organised to stay on top of everything.

I've decided that in February (of course I chose the shortest month in the year...) I'm going on a real, proper Spending Ban, just to prove to myself I can do it! Then I'll be documenting my efforts in a diary for a blog post. Although writing this I kind of realised I'm gonna have to cheat on Day 1 as I've been planning for a while to get the new Nars Skin Tint. But maybe we can start it the day after... Make sure you keep up with me on social media to see how my #FrugalFebruary goes and I'd love it if you wanted to join in.

What have you been watching lately and what did you get up to over Christmas and New Year?