My Week in Lipsticks 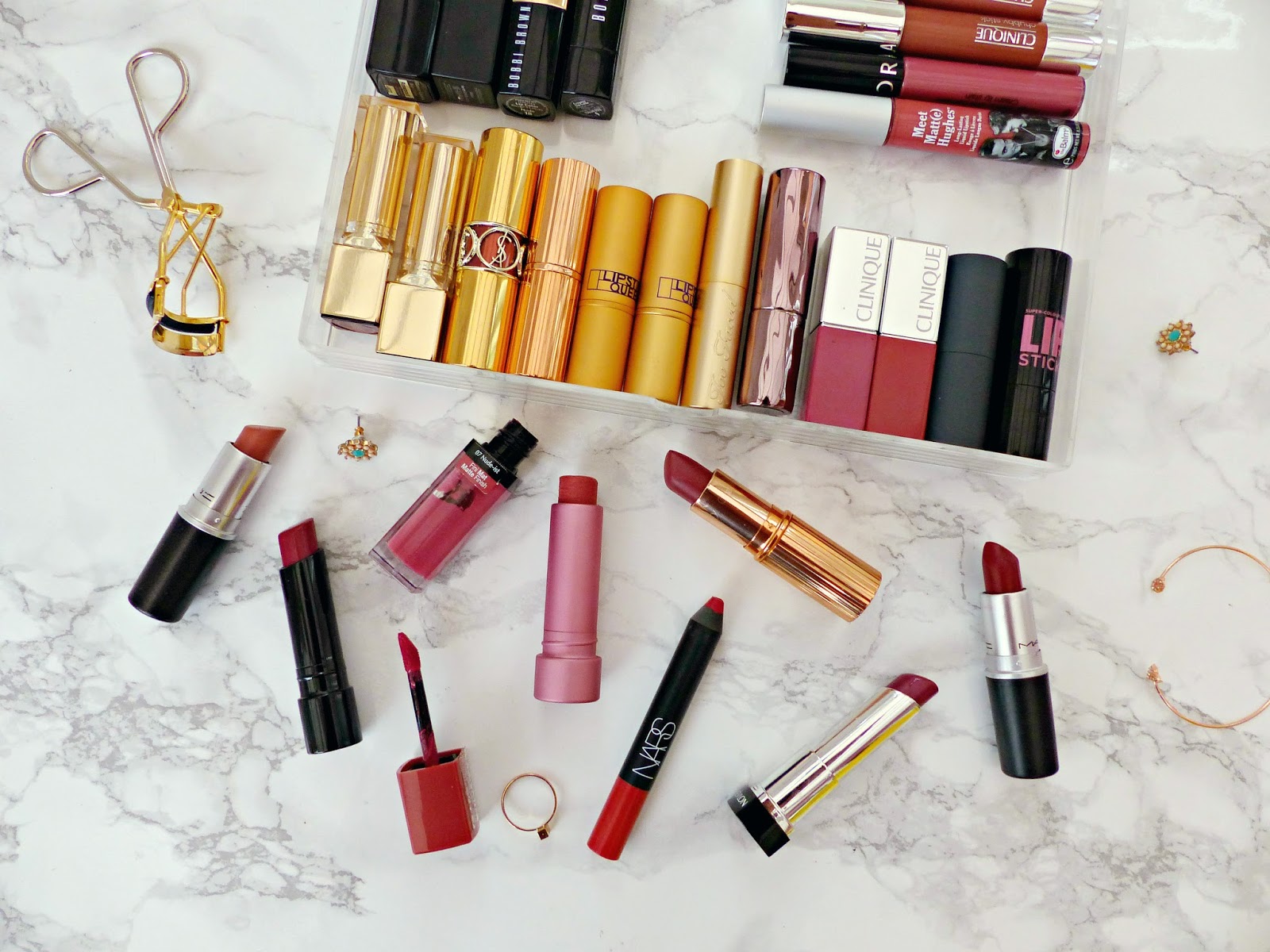 This was kind of a random idea but I thought it would be fun to share with you guys what I've been up to over the festive period through the universal medium of lipsticks! Bear with me...

I actually worked on Christmas Eve; it doesn't bother me as everyone leaves around midday anyway and we got a buffet and a few drinks before we finished. Afterwards my mum drove us down to Warwickshire to my grandparents' house. I chose my classic MAC Jubilee; a fuss-free, natural 'my lips but better' sheer nude lipstick.

As I mentioned in my Christmas Day Makeup post, I wore this rosy/berry sheer lip colour on Christmas Day. It's a really pretty shade and a wearable way to do berry lips without it being too high maintenance. It was really easy to touch up in between all the eating and drinking, though in all honesty, I was wearing a gingerbread man jumper and matching leggings, so clearly I wasn't too concerned with how I looked...

I haven’t braved the sales since my retail days when I was forced to. Instead, I stayed in at my grandparents and ordered what I wanted online whilst I waited for my boyfriend to come and pick me up for us to stay at his for a few days. His family were round after Christmas so we had lots to eat and watched the football once we arrived. I decided to pop on something natural and low-maintenance for the day that would keep my lips moisturised and went with Fresh Honey, a warm nude tinted lip balm.

On Sunday I popped into St Albans and managed to pick up a few bits in the Lush sale as well stopping by Jo Malone to get my grandma a birthday present. Then in the afternoon we went into London to have a bit of a second Christmas with my boyfriend's dad, which was pretty much all afternoon and evening eating and drinking so I wore Bourjois’s Nude-ist. It’s so creamy and comfortable on the lips and has some serious staying power. The colour is a pretty, natural deep pink nude.

I must admit, Monday was a super-lazy duvet day marathoning Narcos on Netflix. I didn't have a shower until about 4pm so by the time I put my makeup on it was dark! We were going to go out for dinner so I put on this amazing (but comfortable and non-drying) matte lipstick. The shade Bond Girl is a gorgeous rosy-mauve and the formula is just fantastic. Unfortunately it was a little bit wasted as we ended up just getting a takeaway! A very lazy day indeed...

On Tuesday we went for breakfast at Bill's, which was my first time and the veggie breakfast was ah-mazing! We had to run a few errands in St Albans before we headed to go and see Star Wars. I'm not that fussed about it but my boyfriend is a big fan and wanted to see it again but in 3D (I kid you not). It was alright; I'll do a proper little review in my next Sunday Post. I decided to pop on a bit of one of my go-to lip colours: Nars Dolce Vita. I wish there were more shades in the Velvet Matte line that did it for me as the formula is just amazing (not dissimilar to the Charlotte Tilbury actually). I love the pretty rose shade.

I headed into London on Wednesday to meet up with my friends for shopping, food and drinks! We went to Westfield Stratford and I got an Inglot palette after seeing Estee and Amelia's in their Dubai vlogs. We had a few drinks somewhere near Kingley Court not too far from Oxford Circus before I got the train back to St Albans. For lips I decided to keep it simple, natural and hydrating for rushing around the shops with Revlon's Sugar Plum. The lip butter formula is somewhere between a tinted lip balm and a sheerer lipstick and Sugar Plum is a lovely plum shade (as the name suggests) that's perfect for this time of year.

I will be popping on Fresh Honey again for the daytime, as I'm out for lunch to have a little reunion with my girls in London. Given it was an expensive Christmas and we just booked New York for next year, me, my boyfriend and my friends will be doing a bit of house party-hopping tonight. But I will still be using New Year’s Eve as an excuse to wear a special lipstick. This year I’ve chosen the glossy red; MAC’s Dubonnet. It’s a gorgeous deep (almost berry) red that’s so pigmented, though the sheen does mean it can transfer. 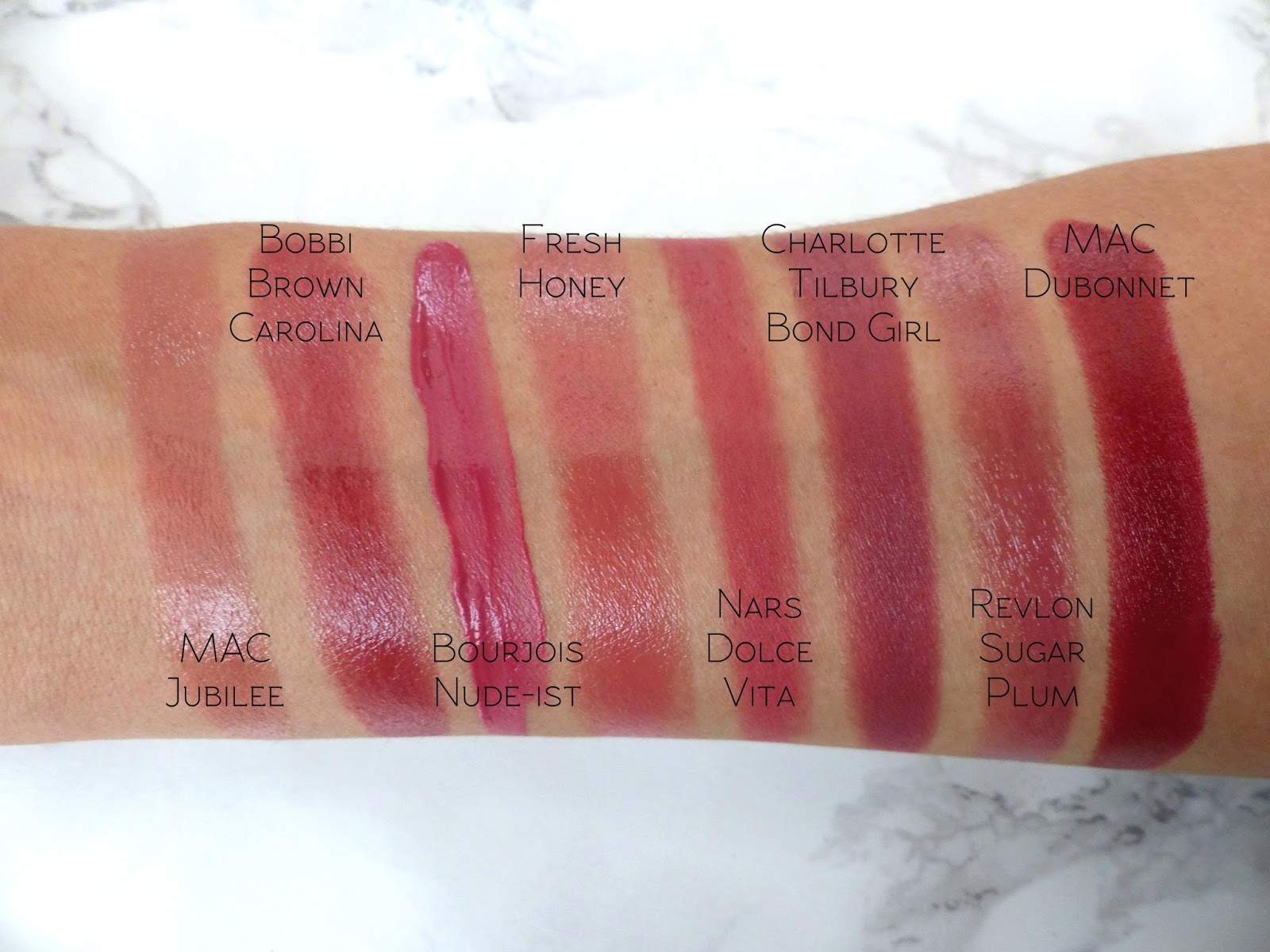 I hope you enjoyed this slightly random post and have a lovely New Year!

What have been your got-to lip shades over the festive period?