So, I'm back in the UK (and extremely poor!), and before I left I went of a bit of a splurge with some of my favourite affordable brands, as well as trying out a new one - the much-talked-about Makeup Revolution. 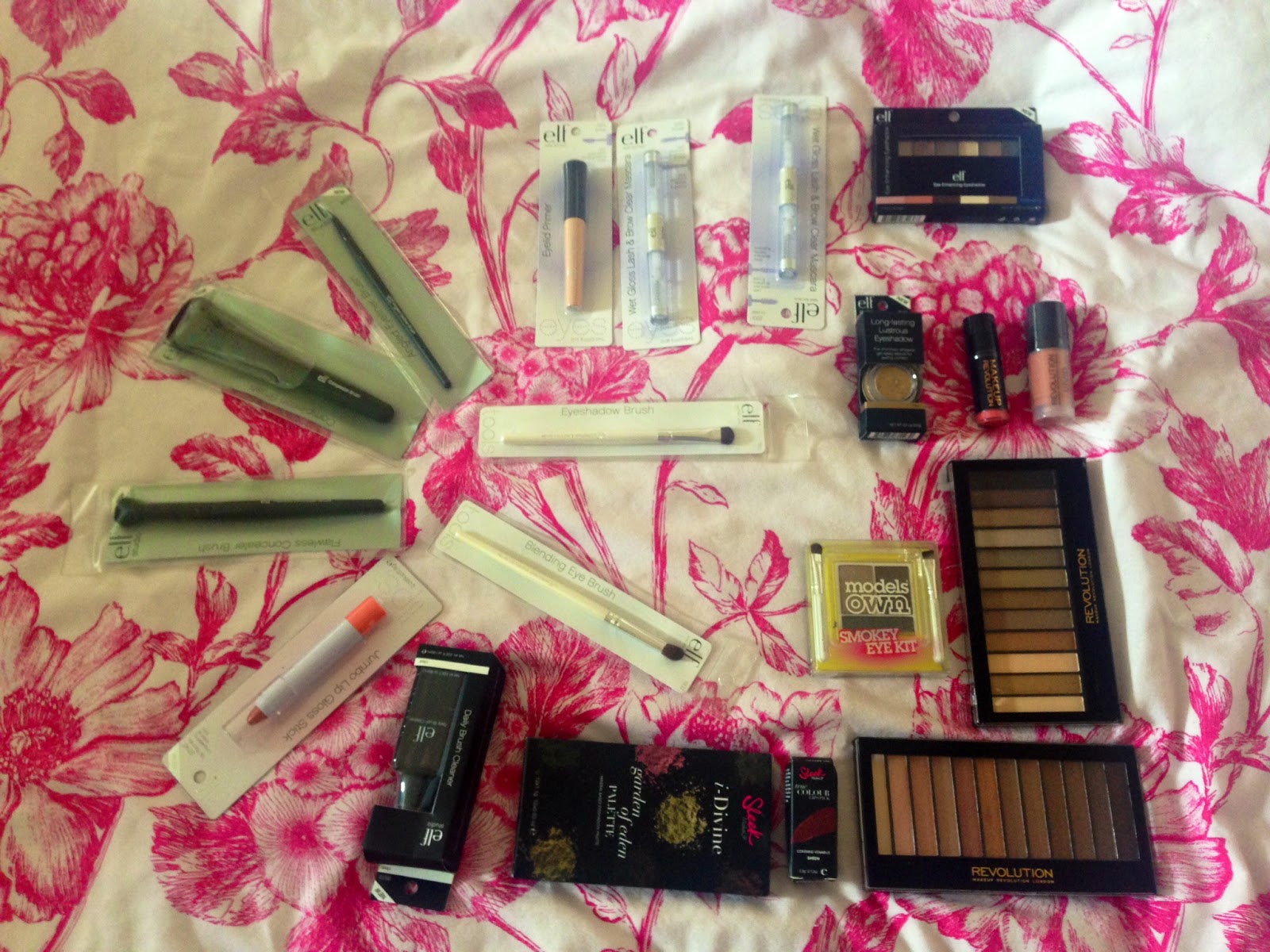 So here's exactly what I got... 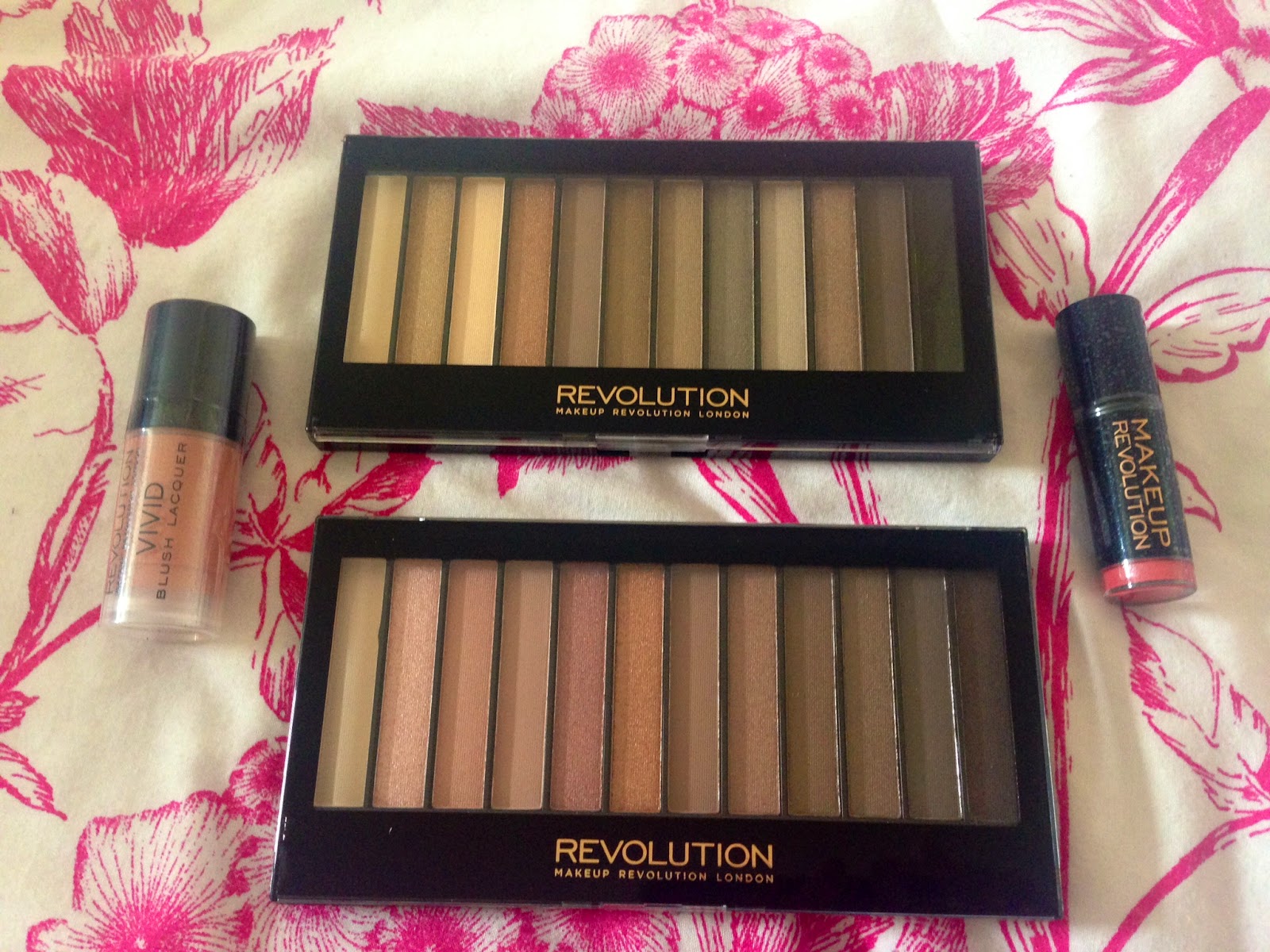 I was really excited to finally get on the Makeup Revolution hype. From what I gather it's pretty similar to MUA (the price points are identical), but some people seem to think it has a slight edge quality-wise. It was really hard not to go crazy, because the prices are so amazing but I restrained myself. Although a lot of their stock is (rather shameless! - not that I'm complaining!) dupes of high-end brands, they've released a ton of original new stuff in the past week I'll be checking out if I enjoy these.

Clockwise from the left we have:

Makeup Revolution Vivid Blush Lacquer, £3
This is pretty similar to the e.l.f. HD Blush (£4.50) which in turn gets its inspiration from Makeup Forever's version (not available in the UK to my knowledge). I haven't tried the e.l.f. version so can't compare the two, but I can't wait to try this out! I got it in what appears to be a terracotta colour (it's hard to tell through the wrapping and even harder on the website) called 'Bloom'. (*UPDATE: review here)

Makeup Revolution Redemption Palettes in Iconic 2 & Iconic 3, £4 each
The Iconic palettes are the infamous dupes of the Urban Decay Naked collection. I partly bought these to see if I liked the colours of Naked 2 and 3 (which is why I gave Iconic 1 a miss), but also out of curiosity, as if the quality is comparable I won't need to get the UD ones! 2 is a cool silvery/taupe collection whereas 3 is centred around rose tones. Both contain a mix of shimmers and mattes and both contain 12 shades. (*UPDATE* review of 3 here)

Makeup Revolution Amazing Lipstick, £1
Nope, it's not a typo, these really are £1! I hate buying lipsticks online when I haven't seen them in real life but for £1 I couldn't say no. I bought Mystify, which looks to be a shimmery coral colour. 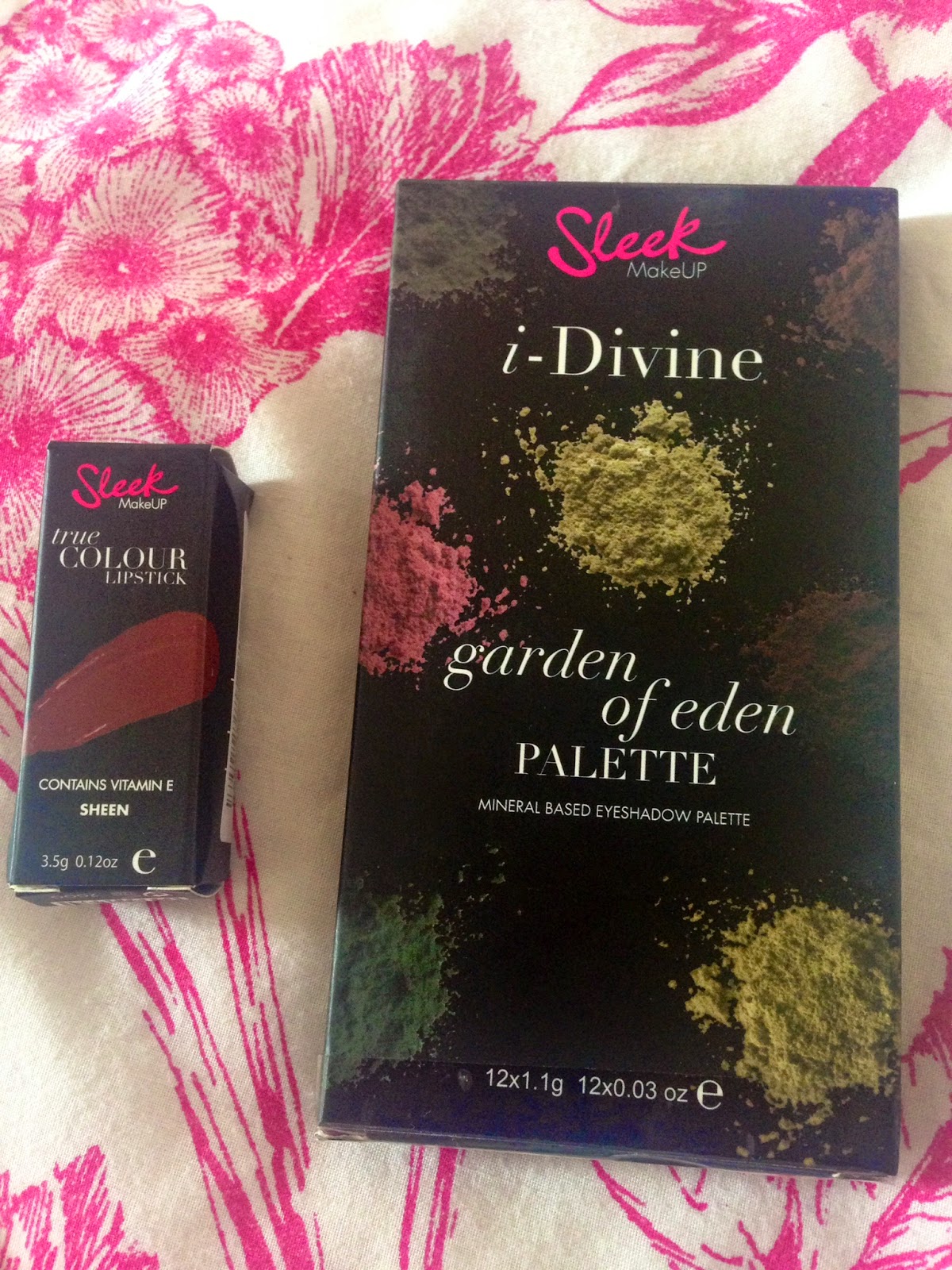 Sleek is an old favourite of mine, so I bought the lipstick (a shade I hadn't seen before) via Amazon, and after they messed up delivering the eyeshadow palette I went into Superdrug and they actually had the one I wanted in stock and undamaged (they've started taping up the boxes to prevent people ruining them): a miracle!

Left to Right I got:

Sleek True Colour Lipstick in Succumb (Sheen), £4.99
I needed to spend an extra couple of pounds to get Amazon delivery so I decided to get this lipstick. I hadn't seen it in store but I like the sheen formula and the colour looks a terracotta-nude, which will be new for me.

Sleek i-Divine Palette in Garden of Eden, £7.99
This palette was released at the start of the year, and I've been umming and ahhing over whether it's for me for a while. I really gravitate towards neutral eyeshadows and this has a mix of greens, purples and browns, so I'm excited to try out something a bit different! 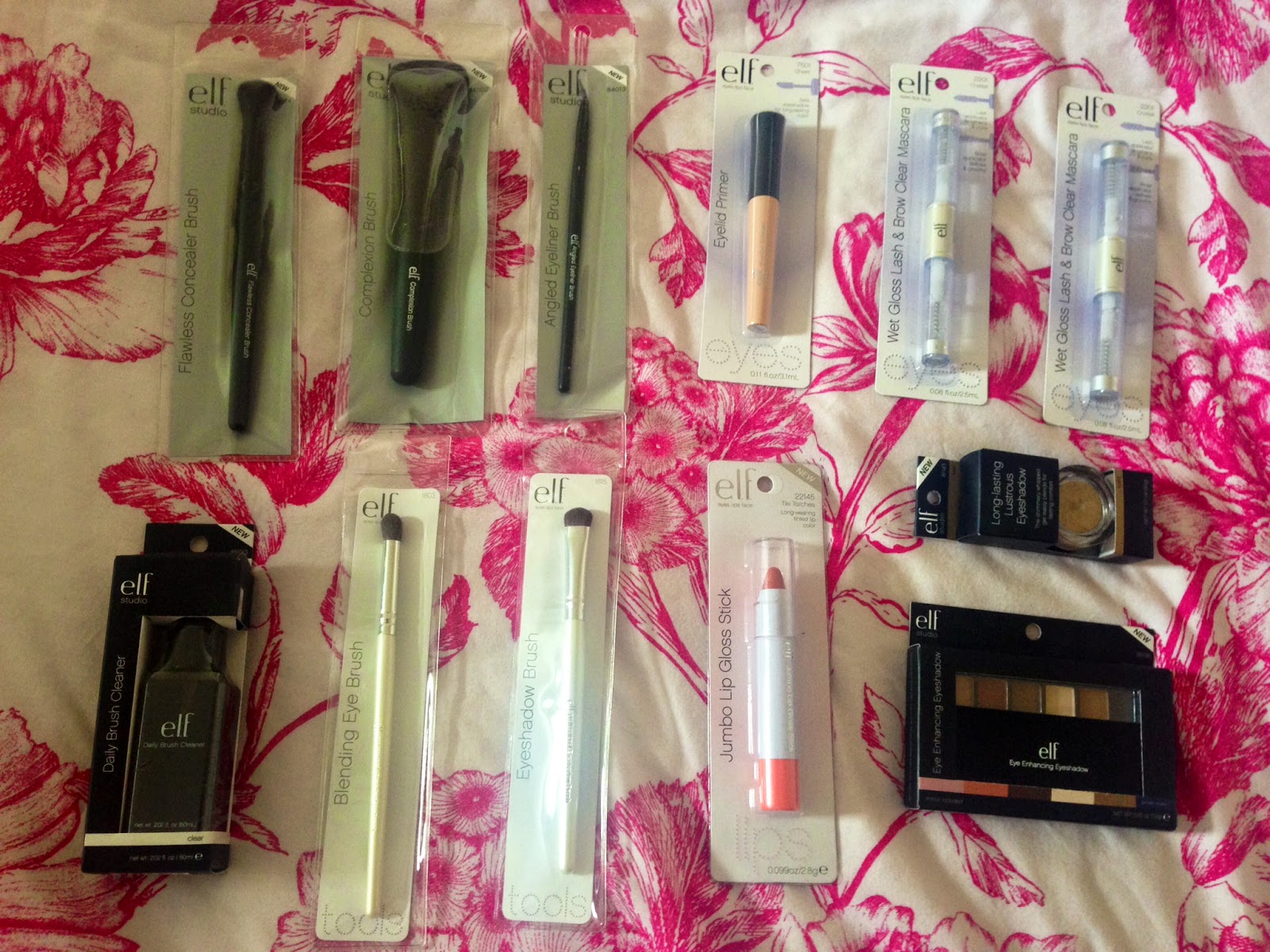 I really love e.l.f., so when they ran a 51% off site-wide promotion to celebrate their 10th birthday I couldn't resist stocking up. I'd run out of a few things and wanted to try some more brushes so placed a big order (N.B. prices below are full price). (*UPDATE* review of all brushes here)

Left to right on the top row and then on the bottom row I got:

e.l.f. Studio Flawless Concealer Brush, £3.95
I really needed a decent concealer brush and the good reviews swayed me towards this one. It's way bigger than I expected, to be honest! But we'll see how I get on with it.

e.l.f. Studio Complexion Brush, £3.95
This is also a brush with great reviews. I was wasting so much time cleaning the brush I use to highlight in order to put matte powder on my t-zone, so I just decided to get a special brush for highlighting and blending.

e.l.f. Studio Angled Eyeliner Brush, £3.95
This is out of stock yet again, but I managed to snap it up after a month of waiting for it to come back. I've never tried an angled brush like this before for eyeliner but thought I'd try it, as I almost always go for gel.

e.l.f. Essential Eyelid Primer in Sheer, £1.95
I still haven't reviewed this product, but I absolutely love it. I honestly think the formula is really similar to Urban Decay's, and I'll be putting this comparison to the test with a 'Save or Spend?' post soon. It runs out pretty quickly, but at £1.95 I can't really complain!

e.l.f. Essential Wet Gloss Lash & Brow Clear Mascara, £1.95
Again, this runs out quickly, so I bought two. I love the mascara for a 'no makeup' beach look and I use the brow gel daily to keep mine in place.

e.l.f. Studio Daily Brush Cleaner, £3.95
I do a big proper wash of my brushes once a week and generally just wipe them down with baby wipes in between, however I think it will be more hygienic to use this afterwards as well. I wanted to buy their brush shampoo too, but it's consistently out of stock.

e.l.f. Blending Eye Brush, £1.95
I decided to get a second blending brush because it gets a bit messy, trying too blend different parts of my eyeshadow which are different colours with the same brush. And usually I don't have time to wash them properly to use again straight after.

e.l.f. Eyeshadow Brush, £1.95
I thought this brush would be ideal for packing eyeshadow onto the lid.

e.l.f. Jumbo Lipgloss Stick in Tiki Torches, £2.95
I liked the idea of a lipgloss stick so bought this one and chose this orange colour pretty randomly. My mum also got this and had a chance to try it but wasn't a fan! I'll make my own mind up once I've tried it though.

e.l.f. Long-Lasting Lustrous Eyeshadow in Toast, £3.95
I used to have a mousse eyeshadow from Topshop but lost it and never got round to replacing it. I also wanted a nice gold eyeshadow, so this fitted the bill. Apparently it can also be used as an eyeliner, so I'll try it with my new brush!

e.l.f. Studio Eye Enhancing Eyeshadow in Brown Eyes 1, £8
And finally, after being disappointed with my last e.l.f. eyeshadow palette, I decided to give it another go with a more expensive (so hopefully good quality) one from their Studio Line. These eyeshadows are meant to enhance the colour of your eyes, so I chose Brown Eyes 1. 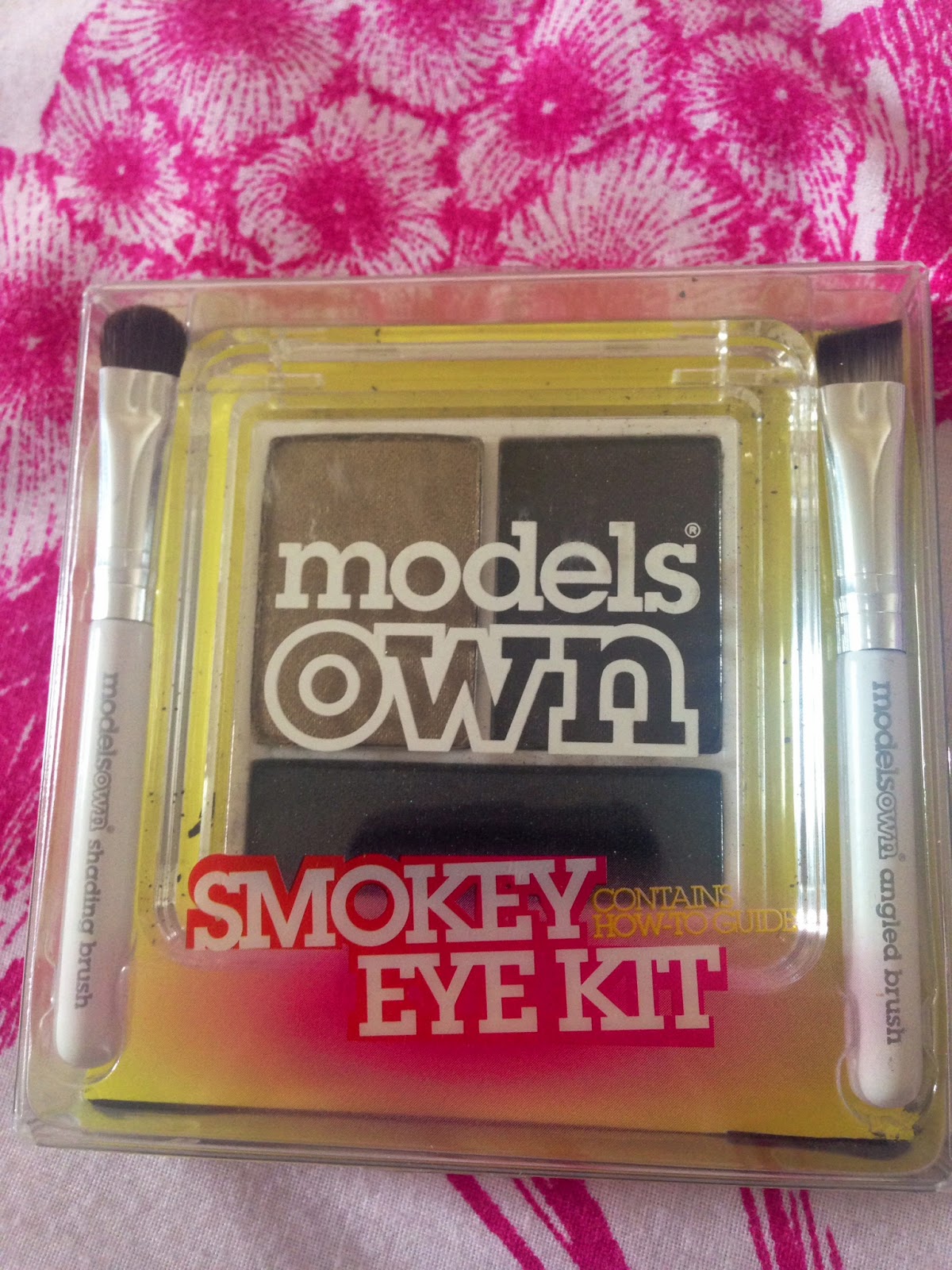 Models Own generally gets talked about for its fantastic nail polishes, but I really rate a lot of their makeup too.

Models Own Smokey Eye Kit in Seduce, £8
I ended up getting this because I'd had it before and it created the perfect nighttime smokey look for me, with a blend of gold, purple and navy. I noticed it wasn't in Boots, Superdrug or on the Models Own website any more in this shade so emailed them about it. The Smokey Eye Kits are being discontinued, it turns out! It's such a bummer as I love one of the gold-toned kits as well (Sensual). They managed to source a couple of these Seduce ones and released them online, but I think these are the last ones, so get them whilst you can!

So that's my hefty budget haul. If you've tried any of these products, leave me a comment with your thoughts on them :)
Share:
Labels: affordable, haul, makeup, makeup revolution, models own, sleek