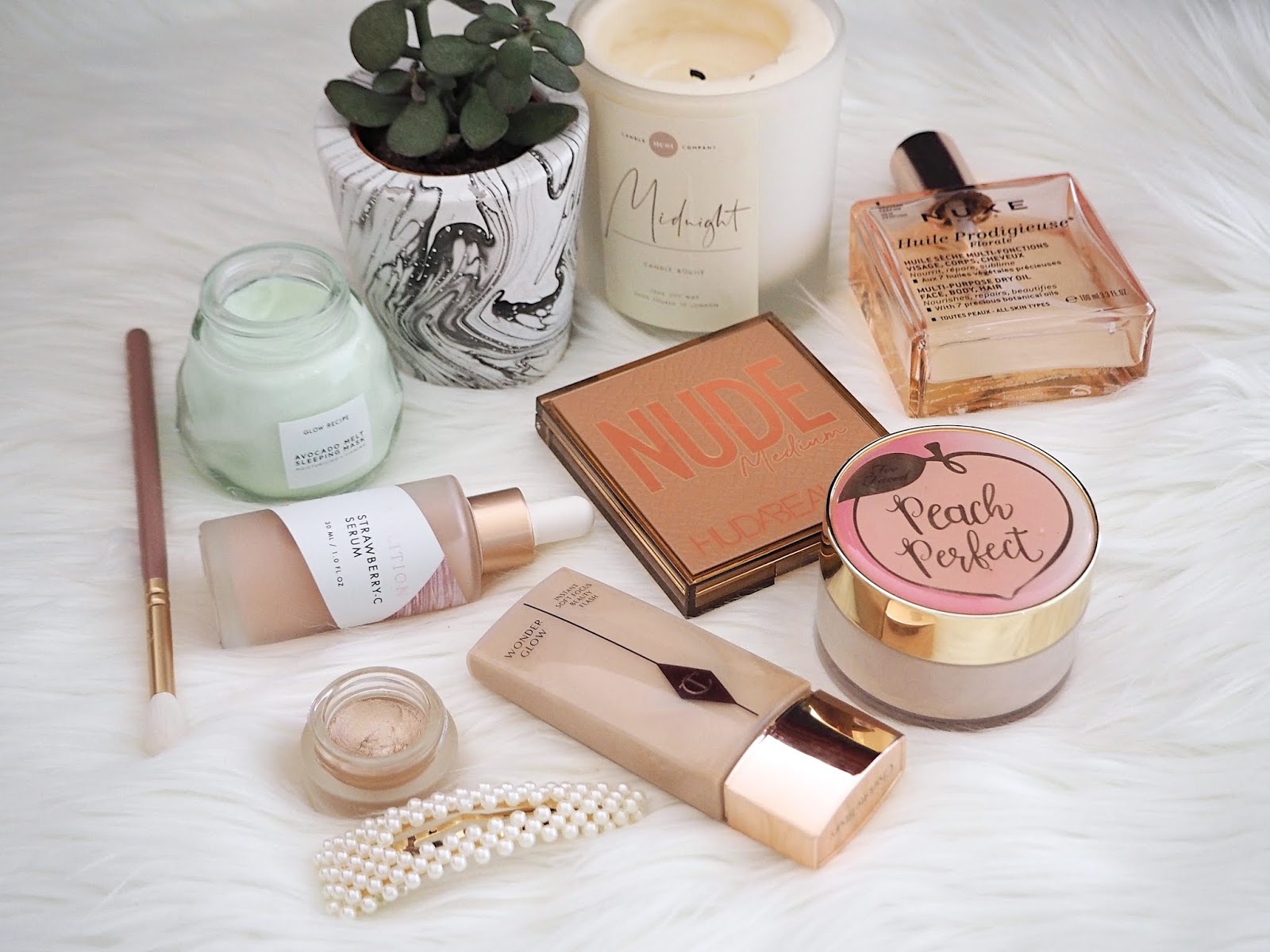 I honestly don't even know how to open this post; when I popped another catch-up post into my schedule, I really didn't think I'd be writing it having not seen friends or family for weeks and not knowing when I will again and having barely left my one-bedroom flat other than for walks through the not-exactly-leafy city centre. We're living in a strange world where the high street is empty on a Saturday afternoon, PCSOs patrol the city to break up small groups of people and there are signs up in the window of every shop and restaurant saying they're closed until further notice. People are uncertain about if they'll have a job tomorrow and doctors are repeatedly being forced to decide who lives and who dies. It all certainly makes you appreciative of what you had before and grateful if you're not amongst the worst-hit in society during this crisis. It's so easy to get trapped in the 24 hour news cycle at times like these when there's nothing else to focus on and it's totally ok to have days when you just feel ****! But, hopefully this post will give you some recommendations of TV shows, films and books to distract you, and we can connect as we all go through this together.

It feels like a lifetime ago, but before the world changed beyond recognition, I was in London a few times; seeing friends, brunching, going to bars, catching up, laughing, celebrating and doing all those things we totally took for granted. Also not knowing it would be the last time we'd hang out for who-knows-how-long. I went for dinner with my grandparents in mid-February, not knowing it would be the last time I'd see them for some indefinite amount of time and that the idea of them getting seriously ill would be a very real threat soon. I also went to Dublin with my boyfriend for Valentine's Day. Despite the weather, our two nights staying in Smithfield were a good laugh with a lot of Guinness and whiskey. We had a great three-course meal at a restaurant called Sova Vegan Butcher, went to listen to live music at The Temple Bar (because it would kind of be rude not to!) and also did a tour around the Jameson Whiskey Distillery to learn about their process and obviously sample a bit of their produce... I'm super grateful to have had the chance to go away and explore a different city before everything locked down.

In terms of how I'm feeling about everything, a few more weeks into this than my last post, I guess I'm trying to take each day as it comes and not think too far ahead or read news reports speculating how long this could go on for. I really miss my friends and the support we give one another, though it has been fun to do everything from a yoga class to getting drunk via video calls! I'm finding that applying routine to my days helps with motivation and allows me to be more productive with work and personal pursuits (luckily I can easily work from home). On the flipside; some days I feel rubbish and I'm learning to allow myself to feel that and not force this 'productivity' thing. I'm also just trying to be there for the people in my life; asking if they want a call or need anything from me.

To end on a positive note: in case you don't follow me on Instagram, I'm in this month's Cosmo UK! You can still grab a copy, but be quick because the next issue is on sale from the 30th.

After Life | I honestly wasn't expecting something of this depth from a Ricky Gervais sitcom, but this series went from being incredibly darkly humorous to heartwarming and life-affirming. I even shed a little tear at the last episode! It tells the story of a local newspaper editor who recently lost his wife to cancer and is pretty angry at the world as a result, as well as depressed and suicidal. However, slowly but surely he begins to connect with those around him and find reasons to get up in the morning, realising that maybe there could be a life for him to live after his grief.

Ted Bundy: Falling for a Killer | I'll be the first to admit that the Ted Bundy story has been done to death and I honestly didn't think there was much more to be said about this vile, misogynistic murderer. However this documentary is really the story of Elizabeth Kendall and her daughter Molly; Liz met him as a young woman, brought him into her daughter's life and they were in a relationship for many years, during which time he was brutally murdering young women. It almost feels like a catharsis for the two women (who I also see as victims of him, though they've hopefully found some semblance of peace through sharing their story). It also forces you to be less dismissive and realise that a true sociopath can dupe perfectly intelligent, reasonable people. It's a very insightful take on these awful crimes that also tells the story against the social backdrop of the time, discussing it in the context of the burgeoning feminist movement.

Noughts and Crosses | This is such a nostalgia trip for me! I feel like there's a generation of 20 and 30-something British women to whom this book meant a lot to in their teenage years and now (in this post-Black Panther world) we're finally seeing it get an adaptation. There are a few adjustments, but up until the ending, this BBC mini-series is pretty faithful to the books. It's a familiar story of star-crossed lovers, this time set in a world where the ruling class of African descent - the Crosses - subjugate the Noughts, who are of European descent. Whilst some could see it as a gimmick, I see the 'race switch' as a simple but very effective way of exposing the racism within our own society; when the main white character cuts himself, he has to put on a plaster that's too dark for his skin tone, the Noughts wear African-inspired hairstyles due to this being the standard of beauty and the Noughts let into the military are accused of being beneficiaries of tokenism. Whilst I can't sanction what they did to the ending, I did really enjoy the ride and seeing a story that meant so much to me as a teenager being brought to colourful life.

JCS Criminal Psychology | It almost feels wrong to call this a YouTube channel, because it's more like a collection of documentaries, with infrequent uploads and bumper run-times. It effectively breaks down interrogation footage, commentating on tactics used by the police, providing legal information and examining the body language and verbal cues that betray a suspect's guilt. It's fascinating watching for armchair detectives like myself.

Freakonomics by Steven D. Levitt & Stephen J. Dubner | This book has been on my 'to read' list for a really long time and I'm finally deep into it. It reads almost like a collection of essays, each focused on a different interesting statistical trend that reveals something about how our world works. It's a little bit nuts at times but also very entertaining for an economics book! Ever wondered what sumo wrestlers and teachers have in common? Or why drug dealers always live with their mothers? These questions and more are answered in this quick, fun and interesting read.

Queenie by Candice Carty-Williams | You've probably seen this cover and I can confirm that Queenie - a novel charting the personal journey of a 20-something black woman in London - is worth all of the hype it's received. It's so relatable and feels such an authentic reflection of mine and many of my friends' experiences of relationships, family, friendship, mental health and forging a career. In many ways, it's kind of like a BAME-centric alternative to Fleabag. It was a real emotional rollercoaster and I quite literally laughed and cried my way through it in around 10 days. It's my lockdown fiction must-read.

Black Pumas | It's been a while since I just found myself popping on an album whilst washing up, to have a bit of a dance to when I'm home alone and to go on my runs listening to, but Black Pumas has given me that! I didn't really think people were still making music like this, but apparently they are and it's great. This is an album that really makes sense as an album, as opposed to feeling like lots of individual singles; each song melts into the next whilst giving a different catchy hook. If you're even remotely into funky soul with a modern twist: check this out.

Couch to 5k | I'm the first person to admit that most traditional forms of exercise like going to the gym or running or swimming just don't do it for me, but we're so limited in what we can do at the moment that I've started jogging with the help of this app. It gives you a weekly plan over nine weeks that gradually steps up the intensity to get you comfortably running 5k three times a week. It starts off small so can help just about anyone increase their fitness level.

How have you been coping with lockdown life? Do you have any recommendations of books, TV shows or any other entertainment for me?