What I've Learnt from Writing my First Novel 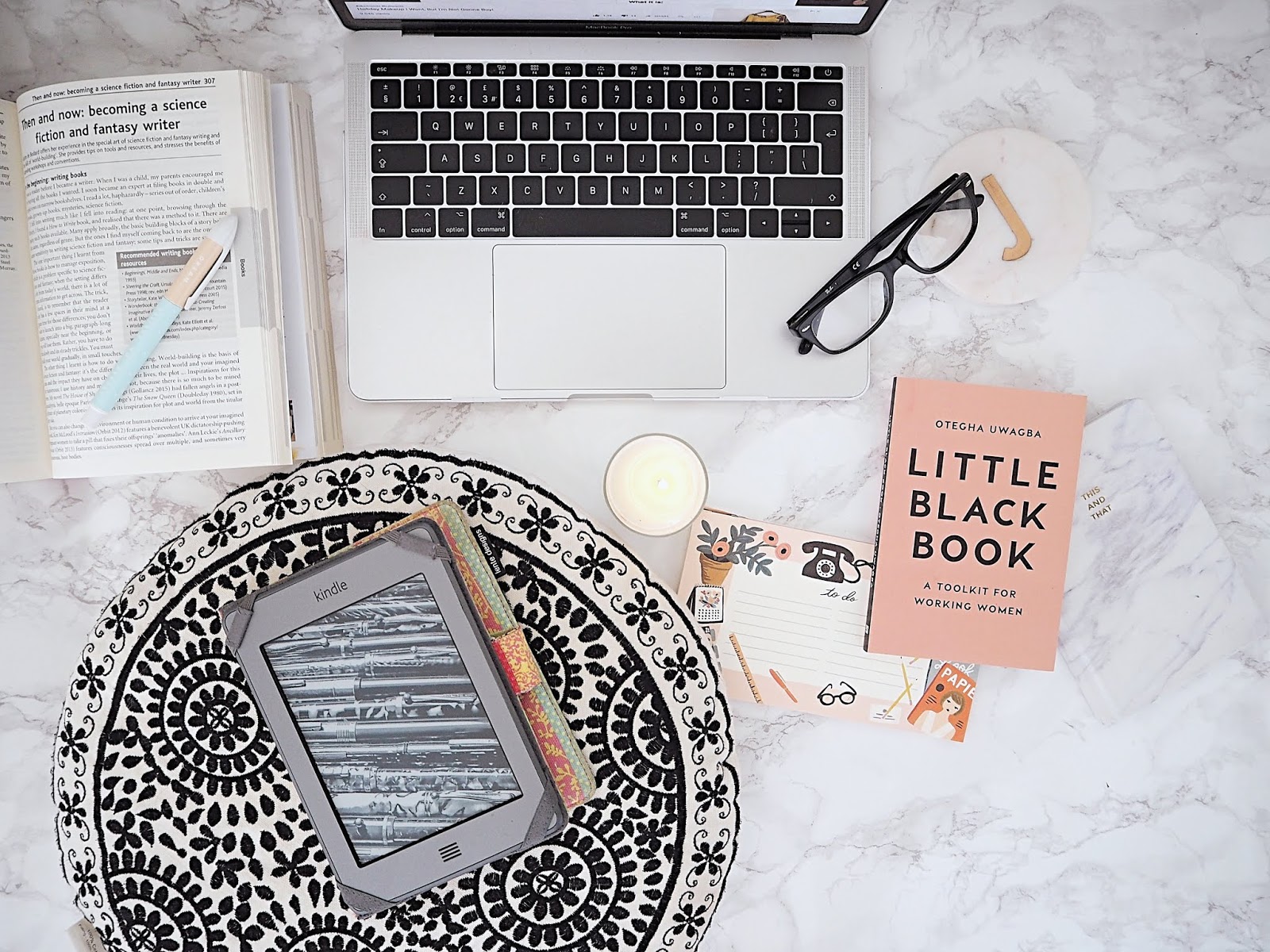 I didn't ever think I'd be typing these words but: I've written a book! I've always been super private about my writing, so I wasn't sure I wanted to share a post about it on my blog, however so many people said they'd find it useful and interesting to hear about my journey and to find out what advice I have to share about it, that I decided to go for it. I really hope this post is helpful to any aspiring writers out there!


You have to write the book you want to read

As I said; I'm not quite ready to shout about my book from the rooftops, so I hope you can understand my not sharing the precise details of what it's about. (Though, I'll have to get used to talking about it if I want to try and get the thing published...)

Although the tides are definitely starting to turn; when I was a teenager and eating through endless fantasy and science fiction books, there wasn't that much representation of me out there. For me, it was really important to add to that genre what I felt was missing and write characters who aren't all white, explore cultures and mythologies from outside of Europe, have LGBTQ+ characters and include strong female leads. I know certain people will roll their eyes about how this is 'pandering' but I honestly don't feel as though it is - my real life is populated with straight people, gay people, trans people, disabled people, women, ethnic minorities and so on, therefore, why would my fictional world be any different?

By 'strong female leads', I don't just mean the cliche 'I can dress like a boy and wave a sword around' character. It was important to me to show different kinds of strength in different contexts. I think 'strength' is interpreted as physical strength in a lot of novels from this genre and, whilst that's a type of strength, I'm more interested in it in the abstract. I really wanted to create characters who are flawed, have shades of grey, have fears and insecurities and weaknesses. To me, a strong character is a multidimensional one that drives the plot forwards and although my female main characters have totally different backstories and personalities, they all do this.


Think about what ideas are important to you and you want to explore, what lessons you hope people will take away from your writing and consider the time we live in. Strangely, even if you're writing about fantasy or future worlds, current affairs can be a huge inspiration. You can find something that resonates with you and use that as your inspiration, whether that's xenophobia in a post-Brexit, post-Trump world, the creeping ubiquity of automation replacing humans in our everyday life, the impact of social media on relationships or whatever else you think captures the human condition right here, right now.

Instead of thinking about what's trending in literature and might get popular, I approached this by thinking about what we need more of and what the teenage me would've loved to have and wrote that, weaving in ideas that are important to me.

You have to make time for it

This is the big one for me! I've been writing for as long as I can remember and I think this specific story has been buzzing around in my head for years. At the start of last year I kind of just woke up one morning and wondered what I was doing and why I wasn't making time for the things that are important to me. From that day onwards, every evening that I'm home (with occasional exceptions if I'm super busy for some reason or another) between 9pm and 10pm; I work on my book. You have to create time in your daily routine that's sacred and dedicated to your book. It doesn't always have to be writing; you can't force creativity, but there are other things you could be doing like looking up potential agents, researching the time period your book is set in (if it's a historical novel) and so on.

If you don't make time for it, you'll end up how I almost did - with years gone by and little to show for your ideas! Using this method, I've written a 120k word book in just under two years whilst working full time, keeping up with this blog, having a life and doing professional qualifications. Obviously everyone's lifestyle is different, so do something that works for you - whether that's taking out an entire day once a week or even typing on a long commute.

People underestimate how much information you have to keep track of as a writer - especially if your book is part of a series and especially if you write science fiction or fantasy. I have a document that I've titled my Bible, which contains information on every single character that appears in the book. Obviously, if it's a minor character you don't need tons of detail but for major players I have everything in there from the names of their parents to where they were born to their ethnic background to their political beliefs to their eye colour to their Myers Briggs type to any habit they have or phrases they use a lot! Some of it may never make it into your books but for yourself, you need to know as much about the world and the characters you've created as possible. If you mention in passing that Katie is an only child in book 1 then in book 4 she has an older brother who's suddenly really important to the plot, it looks sloppy and inconsistent.

If you're writing science fiction or fantasy, your Bible should also go into what the rules are of your world. A story like Harry Potter isn't physically set in another world, but it still exists in a reality that the reader needs to understand, so you have to think about questions like: who can use magic? Where does it come from? What are the rules surrounding it? Is it a secret or is it out in the open? If your story is literally on another planet or in a different universe, like Lord of the Rings, then you have even more questions to answer such as: what language(s) might your characters speak? How many planets are in their solar system? What flora and fauna might you come across in their world? What religion(s) would your characters follow? The list is endless! But to create a fully-realised world, you need to consider them instead of making it up as you go along. It's easy to suspend your disbelief, as long as there are rules and stakes within the imagined world. Maybe in your fantasy world, magic is real but you can never raise the dead; this means that even if your characters have amazing powers, there's something truly at stake. It also means that your readers might be a bit annoyed if you decide to resurrect the main character in book 5...!

I also plan out timelines of events so I don't slip up on what day of the week or time of the year it should be at certain points in the story. If your story takes place in a school or university, it's a good idea to create a timetable for your main character and make a note of which other important characters are in each of their classes, so you don't have Jack's first period on a Monday morning being a physics module in one chapter and then a seminar on romantic literature in the next, and so (if a big plot point comes up before, during or after class) you know who should be present in a scene.

I also have a detailed and a basic plot outline. The basic version is what I started with - what are the key points in the story? (Check out my useful resources down below to see some typical plot structures.) The second one outlines each chapter and contains a brief mention of the significant moments within them (which is also handy just for reference, if you want to go back and change something) which helps to ensure that each chapter has its own mini arc and makes structural sense.

I personally found it easiest to keep track of information as I went along, but if you've already started; don't worry. You can go back through your work and make the relevant notes as you edit and proofread, which will help you root out any inconsistencies.

If you're struggling to move the story forwards, move on and come back to it later

This is one of the big things that's helped me make so much progress! If you're not sure how to move from one scene to the next, just put some sort of a marker in the place where you need to expand a little and move on to the next plot point. It's a lot better than never progressing because you're not entirely sure how to move the story on from a specific scene. I find that going back to it at a later date with a fresh mind helps me come up with a way to transition into the next part of the story.

Don't worry about not being 'original' enough

This is another thing that's always niggled away in the back of my mind, but repeat after me: 'nothing is truly original'! You're the sum of all of the experiences you've ever had and your writing will naturally emerge from all of the stories you've ever heard. However you're telling it in your own way, bringing together the important ideas scattered throughout your mind. Obviously don't rip off other people's work, but don't be deterred if people try to oversimplify your work by comparing it to something else. 'A school with students that have special powers? So, just like Harry Potter?' 'A story where an unassuming character goes on an epic adventure? Sounds like Lord of the Rings!' 'A dystopian YA novel with a female lead? It could be the new Hunger Games.' 'Star-crossed lovers? A space version of Romeo and Juliet!' You get the picture...

Until something has a name in its own right, people will always try to compare it to something else, and marketing departments often do this to capitalise on the success of an existing book. If you know your book is your own work, in your own voice then don't worry about not being original enough.

If I'm passionate about something, I'm the world's worst perfectionist! I've deleted and started my story over again so many times but with this latest attempt, I decided I had to let myself finish and fine-tune the details later. This is the part I'm grappling right now as I edit and revise my first draft. At some point you have to stop tweaking and faffing around with minor details and just put your work out into the world! I don't know yet when that point is, but there's always something you can improve on, however if you keep changing things you'll never complete it.

Kim Chance YouTube Channel
I particularly liked:
How to Choose the Point of View (POV) of Your Book
How to Outline Your Novel
Writing Subplots | Understanding and Using Subplots in your Novel


This post was obviously a bit different for me! However I really hope you enjoyed it. Are you writing or considering writing a novel? I'd love to hear about your journey, no matter what stage you're at.