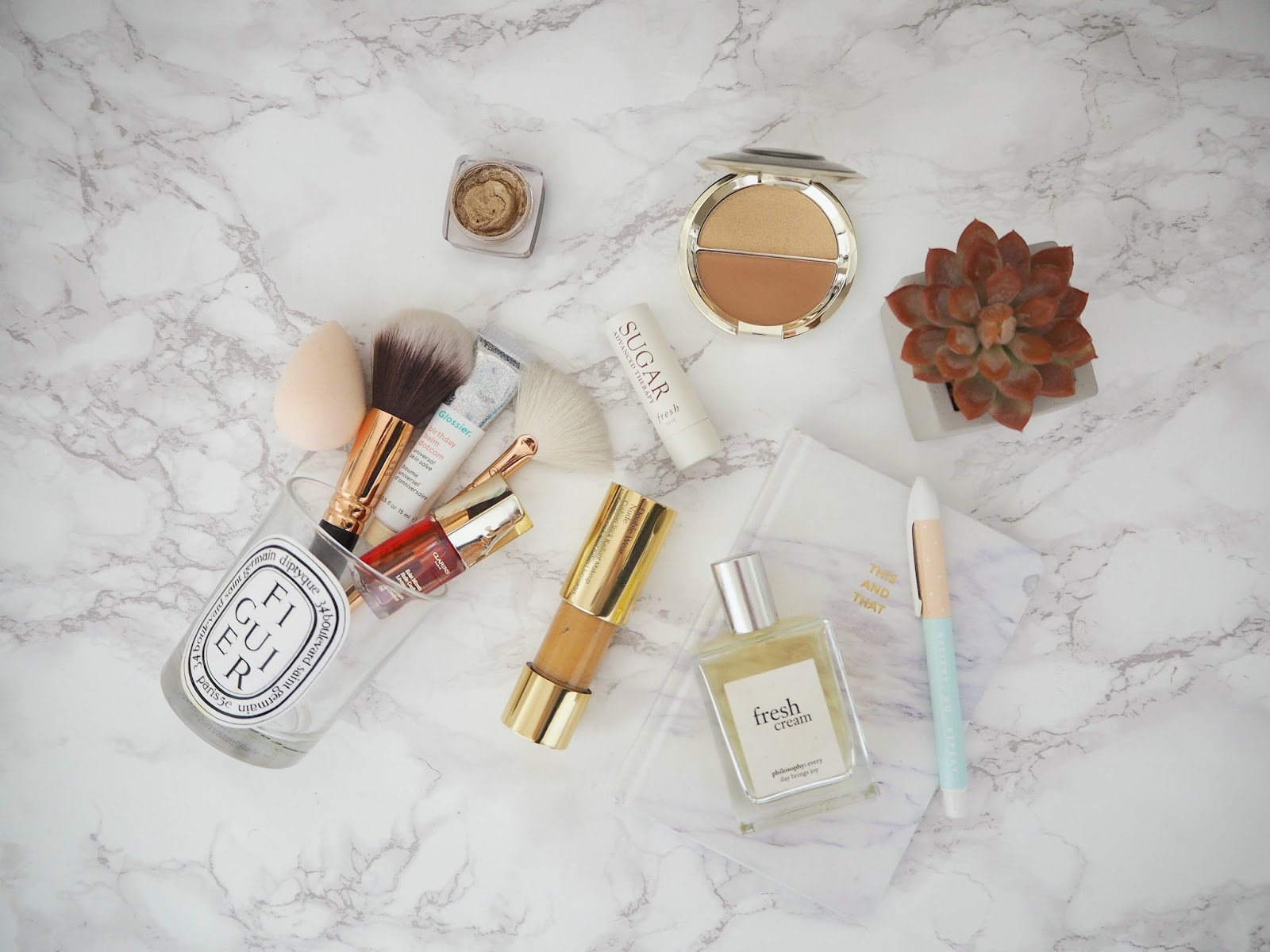 I'm so excited that we're finally getting towards summer! I'm the kind of person who lives for the warmer months as there always seems to be plenty of fun stuff going on. However I've still been up to lots over the past few weeks to fill you in on, as well as having discovered a few new favourites in terms of books, films and TV shows.

I've realised recently that I need to spend more time relaxing on weekends! I tend to make lots of plans, which is all well and good, but it doesn't give me much of an opportunity to hit the reset button and get ready for another week. My friends from university came to see me last month and we were kind of all in agreement that we were shattered and wanted a pretty chilled one. We still did a few things, as it was a friend's birthday, but it was nice not to have a huge night out and one night we just stayed in and got a nice takeaway. I definitely need to keep at least one weekend a month to relax going forwards!

For Easter weekend, I headed back home to Manchester. On Good Friday I met up with one of my oldest friends to meet the other girls who will be bridesmaids at her wedding this summer. I only knew one of them before, so I was a bit nervous, however it's such a good group! I can't wait for the hen party - it's going to be really great to all spend some time together. We went to one of my favourite place for tapas - Evuna - before getting a few cocktails. On Saturday I went with my mum to see Miss Saigon, the musical adaptation of Madame Butterfly (a famous opera) updated to a Vietnam War setting. The staging was absolutely incredible and I was really intrigued by the story as I'd purposefully done almost no research. It's so rare that I see anything on stage where I don't know the background to it inside out, so I really enjoyed the experience of going into it blind. It's essentially a love story between an American GI and a Vietnamese sex worker. There were some really fantastic performances (especially from the cute little boy playing the main character's son!) but I can understand how people could find it problematic (the main female character is sooooo weak and passive). After a lazy Sunday morning we went out for Easter lunch at a new place in Ancoats called Elnecot. I had an amazing cocktail and probably the best vegetarian Sunday lunch ever!

Last month it was one of my good friend's birthday so I went down to London for the day. I was up nice and early to make the most of the day and it was during that glorious heatwave, so perfect timing! We got a really good brunch (I opted for pancakes) accompanied with bellinis at Grainger & Co. Then we headed to Netil 360 to meet everyone else and spent the afternoon having drinks with amazing views in the sun at this rooftop bar. When we started to get hungry again we headed over to Sagar and Wilde, a restaurant we'd been to before (I'd say it has a bit of an Italian vibe) but this time we arrived for the set menu. It was a plate of pasta and a glass of wine for £10 - unheard of in London! Granted, it was a relatively small portion (a few of us - me included - went in for second round because it was SO good!) but still amazing value. After dinner I headed back home and managed to get to bed at a reasonable time so I could finish of an assignment on Sunday.

A couple of weeks back we had a little ex-graduate weekend in Birmingham with a few of us who were all on the scheme at my company together. As not everyone is still with the company it was really great to have a catch-up. We started by getting some brunch at Yorks, near the station, which does really great food and baked goods at a very reasonable price. By the time we were done there it was time for our Gin Masterclass at the Jekyll & Hyde. I've done this before but it was fun to go back with a group; essentially they walk you through the history of gin, there's a bit of a quiz, they make you a few cocktails as you go along and then you get the chance to concoct your own and there's a bit of a competition between the groups. We continued the sesh at the Liquor Store, a speakeasy under a clothing shop near where I work that I've been for cocktails at a few times, before getting pizza at the Stable, which was great as usual! The next day we were definitely feeling the pain so had a casual Sunday dinner at House in Leamington. My food really was excellent (lobster bisque followed by a veggie option) but the service was very slow!

At the start of May, after months of looking forward to it and planning everything, it was time to attend an Oxford Ball. One of my friends is currently studying there so a big group of us bought tickets for her college ball and got ourselves an Airbnb to make a weekend of it! Once everyone arrived, we went for dinner and drinks at an amazing, affordable Sri Lankan restaurant called The Coconut Tree. It's small plates, so kind of like tapas but not Spanish, and you can just keep ordering more - I had a cocktail and plenty to eat for £16! I definitely recommend it if you're ever in Oxford - the food was such good quality with amazing flavours and plenty of seafood and vegetarian options for me. The next day was the ball - during the day we had a wander around the shops and a few of the girls got their makeup done. We also got drinks at the bike-themed Handle Bar, which were really great, and made plans to return for brunch after the ball. The ball itself was so much fun! We were incredibly lucky to have beautiful weather and, given the cost of tickets all of the food (served from stands and including paella, pizza, churros, wine and cheese and more) and drinks were included. Along with this there was a silent disco, improv comedy, a casino area, shisha, live music and DJs. You can check out what we wore here. Needless to say we weren't exactly feeling fresh when we had to vacate the Airbnb the following morning, so yummy pancakes and a green smoothie at the Handle Bar before heading home was exactly what I needed.

Creating Freedom by Raoul Martinez | I'd been meaning to read this book for ages and finally got round to it last month. It's hard to describe it but I'd say it's a study of social, political and economic freedom, examining how free we actually are and the systems in place that limit our freedoms (to give you a flavour, it begins with a chapter called 'the lottery of birth'). The second half then dives into how we can look to create freedom and break down inequality.

The Good Place | This is a cute little sitcom with philosophical themes, making it perfect hangover marathon viewing in my books! The main character (played by Kristen Bell) isn't an awful person but she definitely...could've done better in life. She dies in a freak accident and is mistakenly sent to the Good Place, instead of the Bad Place, so ends up where all of the selfless, giving people go after death. Obviously she doesn't quite fit in and sets out to prove she deserves to be in the Good Place. It's definitely a more interesting and intelligent breed of sitcom, but obviously delivers the laughs along with its moral philosophy references.

A Quiet Place | A couple of weeks back, I went with my mum to visit my grandparents and we decided to catch a film. I didn't know a lot about A Quiet Place but the trailer had looked intriguing so we went for it. The concept and background of how the world came to be this way isn't explained in any real detail, instead it's an intimate story and the central family are the only characters in the film. It takes place in a world where strange creatures inhabit the earth who are blind but have super-sensitive hearing, so if you want to survive; you have to live in silence. It's very, very good if you want a seriously tense, edge-of-your-seat watch.

This is America | Obviously the entire world is talking about this music video but I've linked it just in case you've been living under a rock! I absolutely love Donald Glover and I feel like this song is exactly what rap music is really about; making a statement or observation about the world we live in. This video is so layered with symbolism that you really do spot something new each time, so even if you've seen it, I encourage you to watch it another 20 times! (I also kind of feel as though this is what Kanye thinks he is doing right now...)

Have you discovered any new lifestyle favourites recently?