Which Do You Need? | Anastasia Soft Glam vs. Modern Renaissance 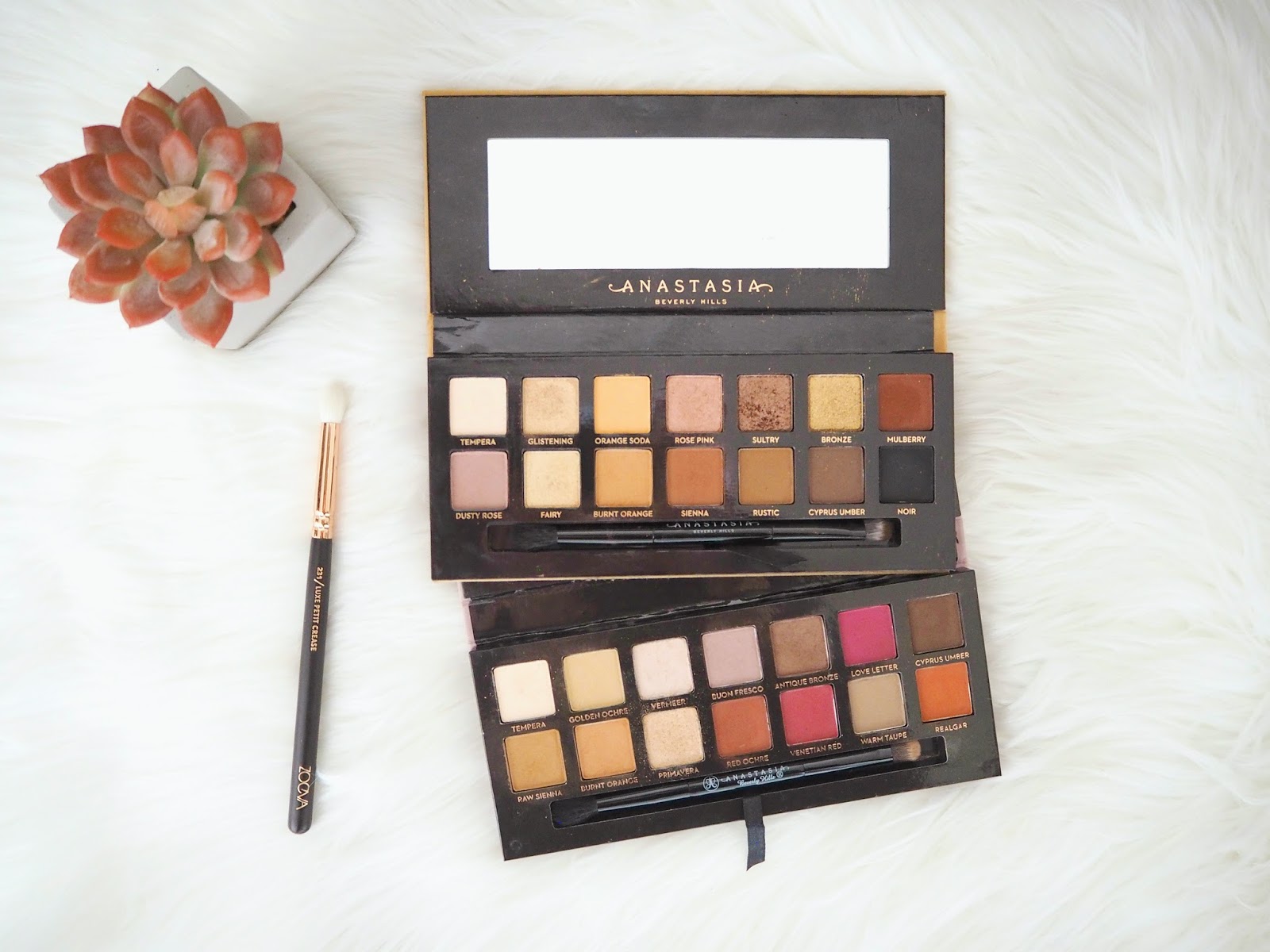 Ok, so you've decided to pick up an Anastasia eyeshadow palette: great life choice! As we'll get onto; I think the quality of their formula is right up there. However, their palettes aren't exactly cheap and both Soft Glam and Modern Renaissance offer wearable day-to-night shades. Today I'm going to be comparing the palettes to help you decide which one might be for you.

Both the Soft Glam* and the Modern Renaissance retail for £43 and come with 14 shades. It's not a huge deal, but it's worth noting that the Soft Glam contains 0.74g per pan whereas the earlier Modern Renaissance is only 0.7g. It is nice though that, in a world where we're generally paying more for less product, Anastasia is increasing their pan size (perhaps in response to the feedback that these do have some fallout so you might hit pan sooner?)

They come in the same packaging - the exterior is felt and you get a dual-ended brush (I usually don't use these but will acknowledge this one is pretty good quality). I do find the felt gets grubby very easily on both of these light-colours palettes, which is annoying. Outside of that it's function and travel-friendly so does the job for me.

I love the Anastasia eyeshadow formula, and along with these two palettes, I own many of their singles. It's pigmented and blends beautifully, having really good longevity. Across both of the palettes, I don't think there's a single shade that I find hard work! What I would say is that they kick up quite a bit of fallout - I don't own Subculture but from the YouTube videos I've seen, these aren't as bad as that one! I tend to gently tap my brush into the product - you definitely don't need to swirl it around or dig in - like I said, they're very pigmented and you don't need a lot on the brush to get that payoff.

We'll start with the Soft Glam. Three of the shades (Tempera, Burnt Orange and Cyprus Umber) are repeated from the Modern Renaissance, which I know disappointed some people. However I find those shades to be the standard crease colours, so it doesn't really bother me because they aren't what make my makeup looks different to one another. There are some shades from their permanent range in here too - I do actually have Sienna already.

Personally I love the shade and finish selection. I like that there are several lid colours in here and using the foiled yellow gold Bronze creates a completely different look to the warm pinky-purple shimmer Rose Pink. Glistening is a really pretty light peachy shimmer which can be used across the lid on fairer skin tones or as a highlighter if your colouring is deeper. In terms of crease colours, as well as warmer mattes like Burnt Orange and Sienna, there's also a cool taupe shade in Dusty Rose and something deeper in the reddish-purple brown Mulberry (I LOVE this shade as I don't have anything else quite like it in my collection).

I travel a lot with this palette because it's versatile and I can use it for natural daytime looks or when I'm going full glam for the evening. I pick it up ahead of a day at the office just as much as I reach for it when getting ready for a evening out, which is what keeps me opting for it time and time again. 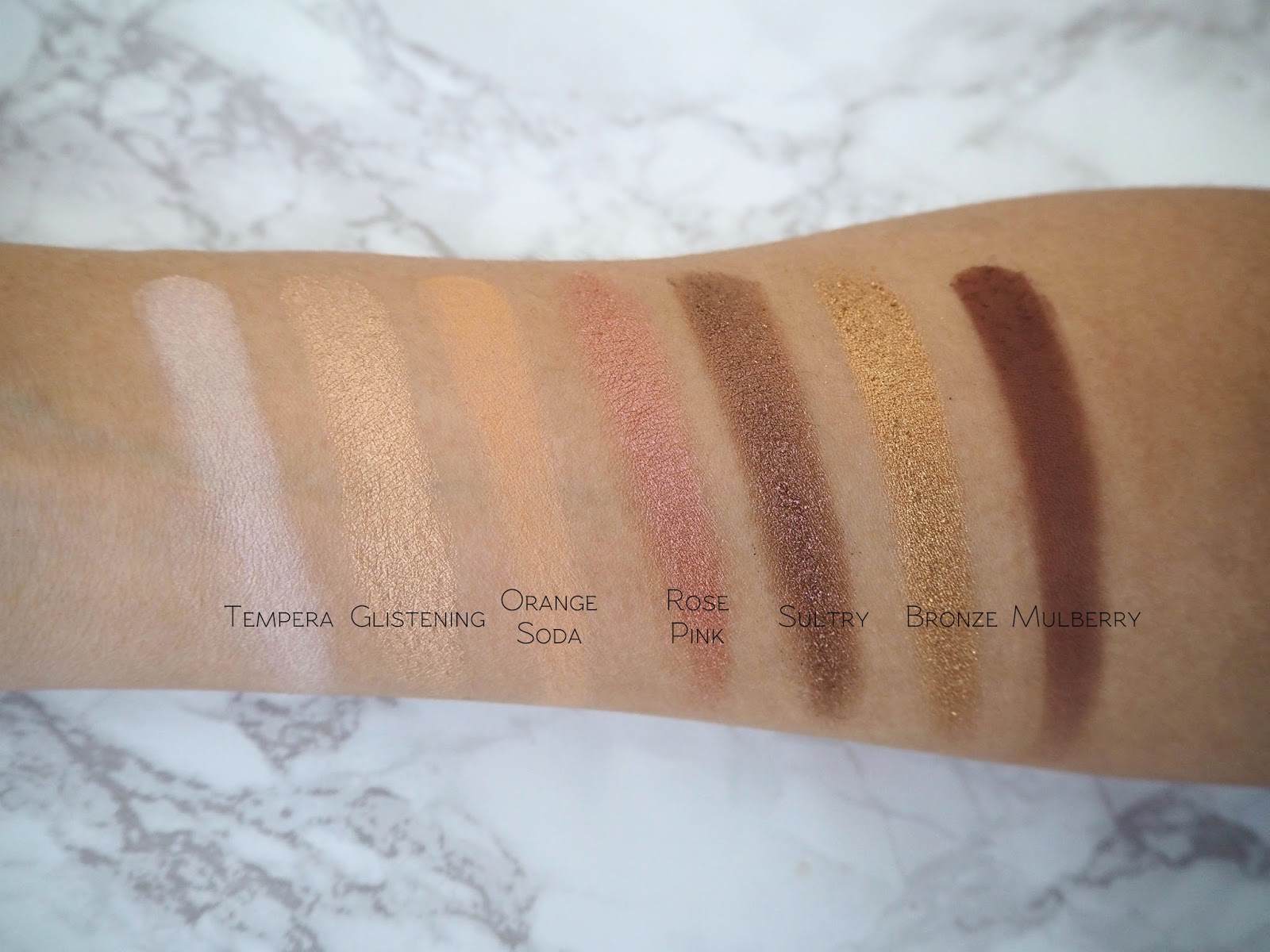 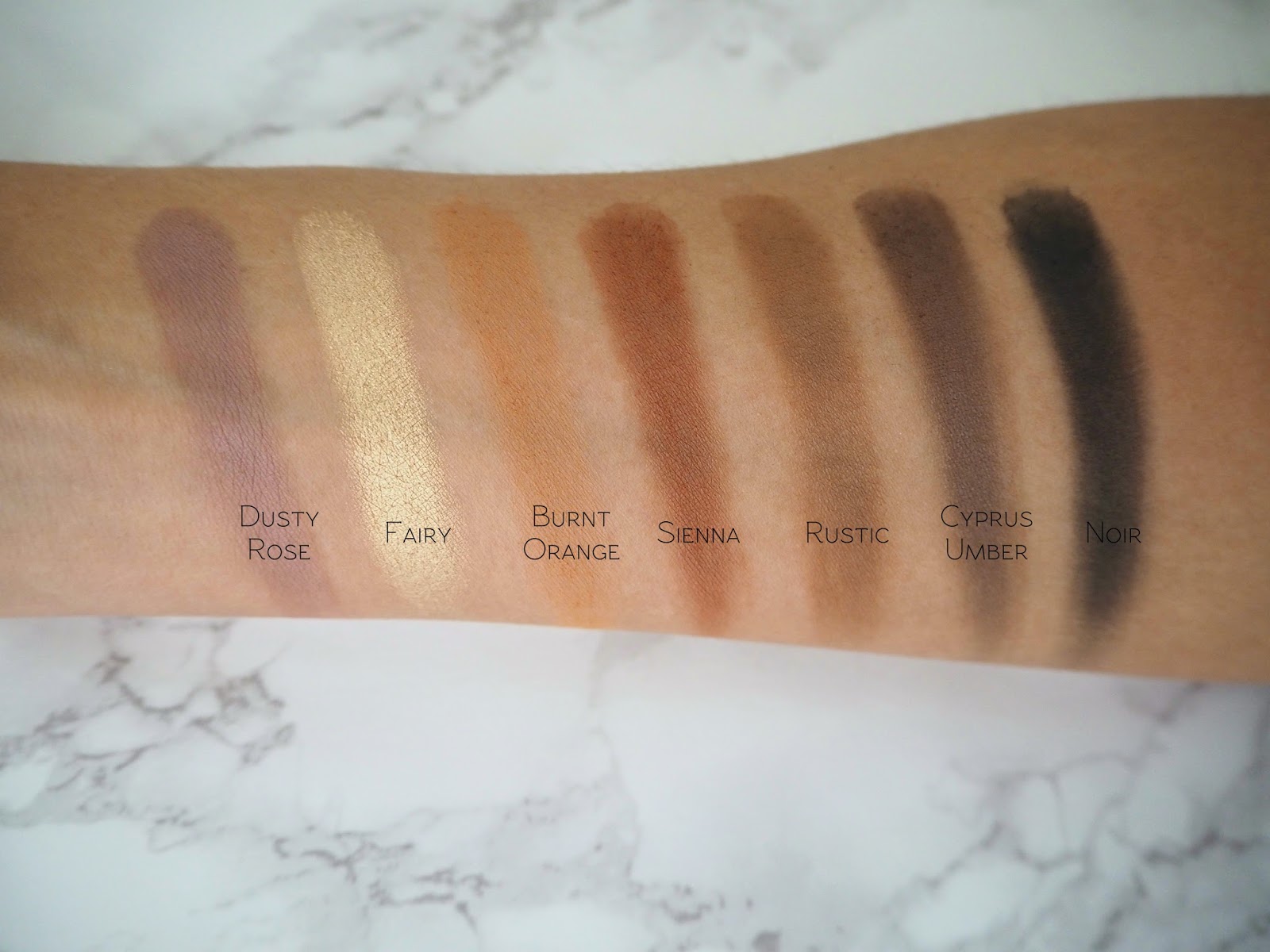 Onto the Modern Renaissance! Do you remember the hysteria when this launched? It's still one of the internet's favourite beauty products a couple of years later. Although there are one or two cool shades thrown in, this is very much a warm-toned palette, though I do think it suits a lot of skin tones based on looks I've seen using it on YouTube and Instagram. It is primarily a matte palette with three true shimmers and two that have a slight sheen (so are debatable). I regularly reach for this when I just want one shade from it because there are so many crease colours that for a lot of my looks one of these will work.

At the same time, I don't get the use out of this that I'd hoped - however hard I try, my makeup looks tend to look similar to each other with the Modern Renaissance. I've said many times that I'm not a makeup artist, and as I mentioned, you can see lots of tutorials online featuring this palette but I just want something I can grab in the morning and use intuitively. On the average day, the shade that calls out to me as a lid colour is the light gold Primavera (as I rarely go for all-matte looks), so I can either go for a warm crease colour like Raw Sienna or Golden Ochre or a cool one like Warm Taupe or Buon Fresco. If I want to switch things up a pink or red like Love Letter or Red Ochre is pretty. However I do find myself getting a bit bored with the looks I create when I use this palette on its own for an extended period of time and I know most people don't want to spend £43 on a palette and then feel as though they have to use it with something else! 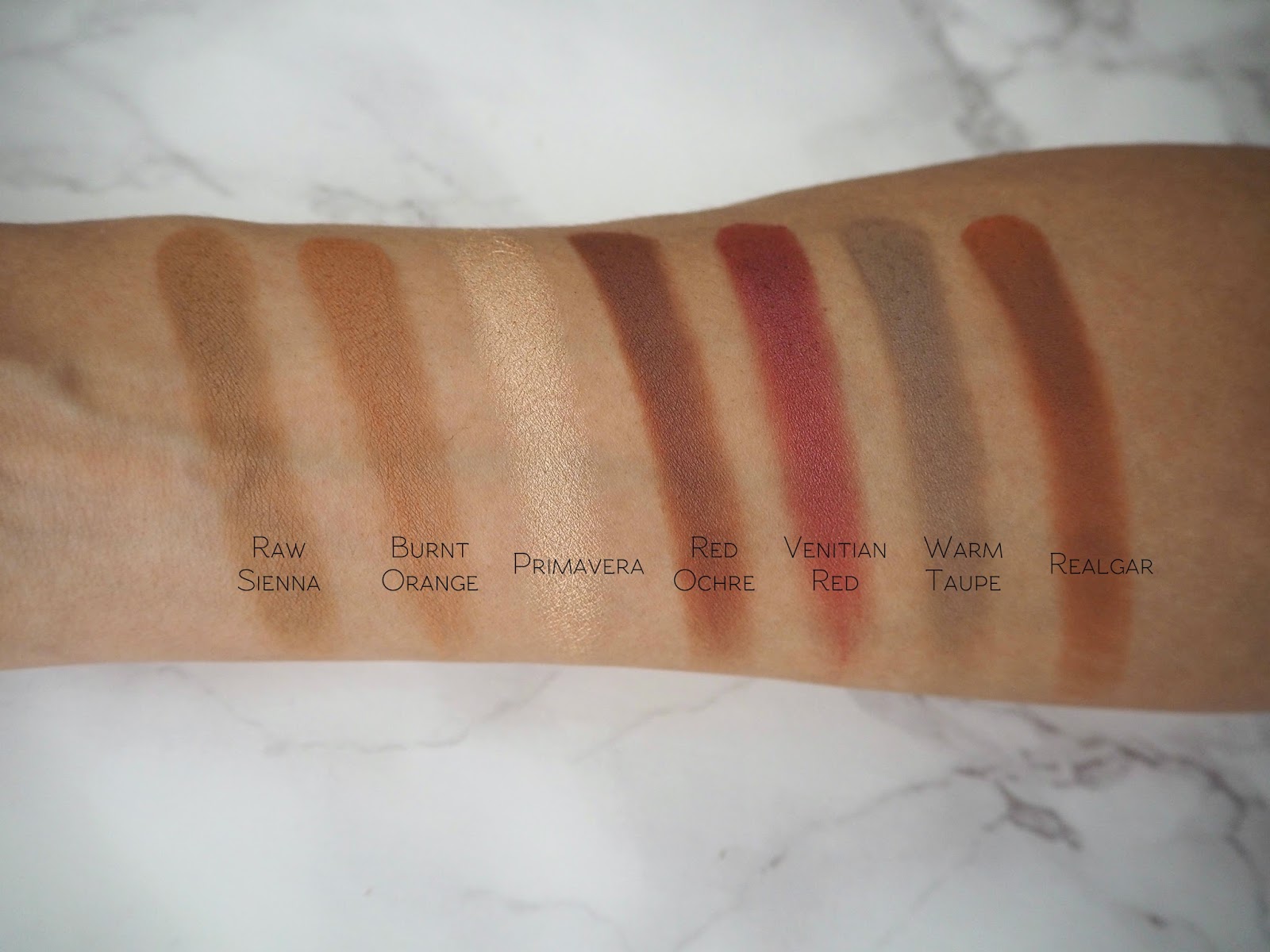 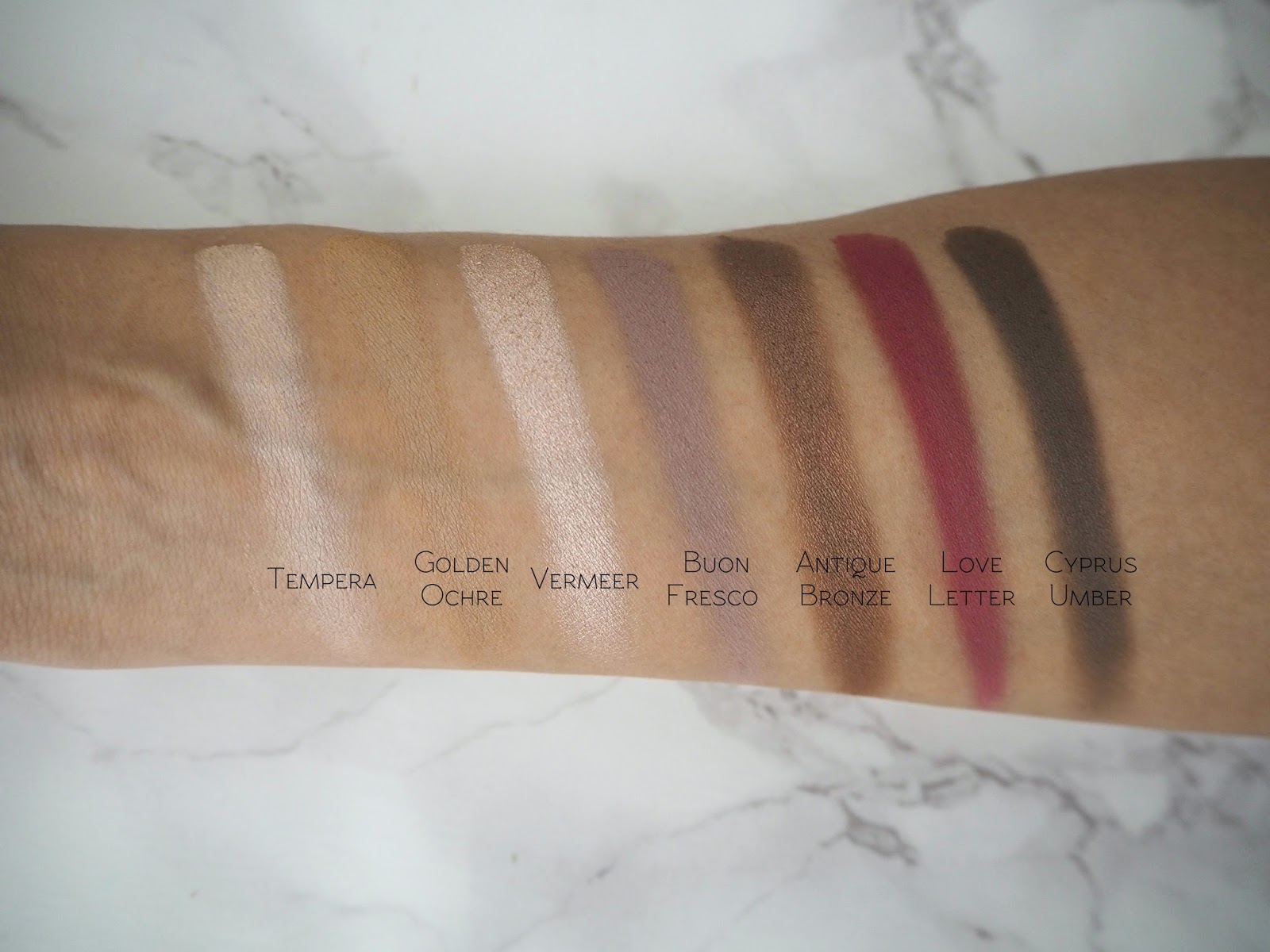 If you're all about warm-toned mattes then I think Modern Renaissance is for you. It has pretty much all of the matte colours you need, making it a great option. If you're someone who doesn't really need shimmers but will get use of the one or two in here for highlighting, then this could also work for you.

If you don't spend a lot of money on makeup and just want one palette that can do it all for you, then I think it just has to be Soft Glam. I personally can't get enough of it and I guess it says it all that I've used more of it in the two months since getting Soft Glam than in the two years I've had Modern Renaissance!

If it wasn't totally obvious already: my vote goes to Soft Glam. I know some people have complained it's 'boring' or whatever, but most people investing in a high-end palette want something wearable and this can take you from day to night and it's easy to create versatile looks using Soft Glam. It's pretty ironic that I rushed out and bought Modern Renaissance the second it dropped and haven't reached for it that much, but with Soft Glam I'd talked myself out of buying it before Cult Beauty sent it over to me out of the blue, yet use it to death now!

Do you have an Anastasia eyeshadow palette?