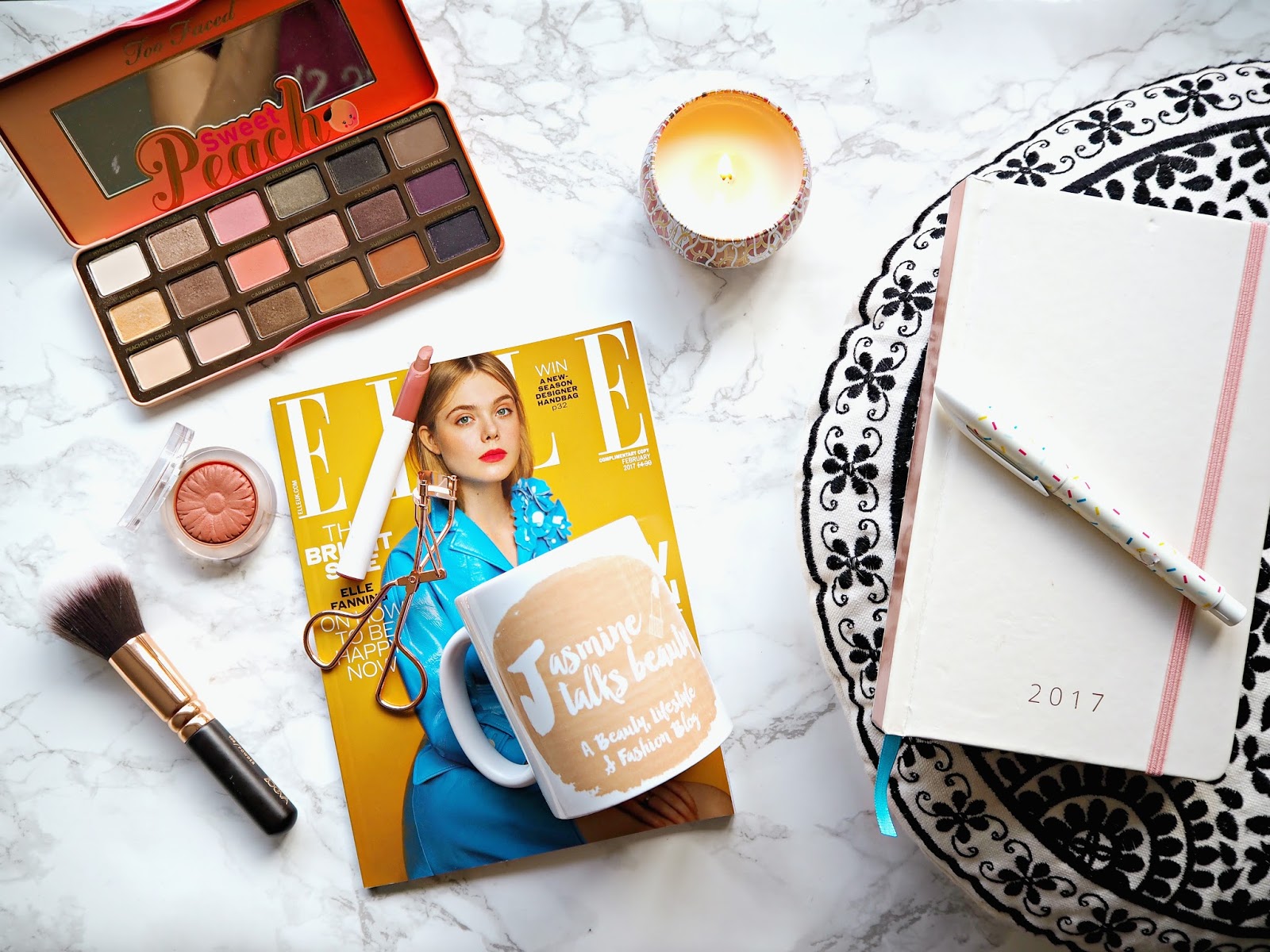 It's been a little while since we caught up and I've been here, there and everywhere in the meantime (check out my post on Prague here and there'll be one up on Amsterdam soon) as well as having exams, coursework and my job all on the go!

A few weeks back, my friends descended on Birmingham and we had a really fun weekend! On the Friday night we went to a cool event in Digbeth called Magic Door, which obviously meant a late start on Saturday! We went to one of my favourite places in Birmingham to do lunch - Damascena (Instagram) which is a middle eastern restaurant. Everything is really affordable and they do amazing mezze platters (with loads of vegetarian options) and a wide array of coffees and teas. You can just order a ton of stuff and swap and share with your friends. I actually had some bad news which put me in a sad, weird mood for the rest of the day, though everyone tried their best to cheer me up. We went to the cinema, got tapas and had a few drinks at an amazing cocktail bar called the Edgbaston.

I've also discovered a few great places in Birmingham recently that I thought I'd share with you in case you're ever in the city. I just had a catch-up with one of my university friends at Zindiya in Moseley, a relatively new Indian Street Food place. The food was so great - you can order loads and just share, plus it's great value. I then caught up with another friend for lunch at a place local to me called Cafephilia (Instagram). It's quite a simple place so doesn't have a wide menu but they do tasty sandwiches and great coffee, smoothies, milkshakes and tea. Finally, I  made the first of what I think will be many trips to Indian Brewery. This place does what it says on the tin - it's like a craft beer pub with great Indian food. It's also really affordable - I got half a pint and a meal for £6, which I could easily have spent at Pret or Philpotts.

Myself and the girls also met up at the start of last month in Bristol. It was such a gorgeously sunny weekend! When I arrived we brunched at Spicer and Cole (Instagram) which was soooo good before taking a wander round Clifton, seeing as I'd never seen the suspension bridge, and had a few drinks. Afterwards we had a bit of a shopping trip (again, I've somehow never hit the shops in Bristol) before heading back to get ready for the evening. We really wanted to go the the tapas restaurant Bravas but had been unable to book when my friend tried the weekend before (it's actually a really small place inside). After a couple of failed attempts to find somewhere else, we decided just to wait in Bravas for a table. However it was well worth it! The food was amazing and there was so much choice, we also had some really great wine and they have a load of options if you like gin. Afterwards we did a bit of a crawl around the secret prohibition-style bars in Bristol, which was really fun. The next day the weather was still pretty good so we hung out by the river and had pizza with ale at an amazing place we've been to before called The Stable (Instagram).

I also joined the gym! No, really... I'm not sure why I chose a time when it was really busy at work and I had exams on the horizon but it's happening! I'm honestly just not the sporty type and never have been but I think I need to start doing the bare minimum of working out a couple of times a week. The office block I work in actually has a free gym in the basement, which was the nudge I needed because there's obviously no commitment or money spent. I'm generally warming up with cardio and then focussing on weights - I honestly find cardio repetitive and boring so doing weights works for me, as it's also more measurable and you can see yourself improving over time.

I also had the chance to meet two of the ladies from the Dowal Walker PR agency. They represent some amazing brands including Marc Jacobs Beauty, Stila and By Terry. It was great to get to meet some of the people I've been emailing (if you have a full time job and/or don't live in London then blogger meetings and events are a rarity!) and see the exciting new launches their brands have in the pipeline. I also got an amazing goodie bag so keep an eye out for reviews!

Personalised Mug* | £5.95 | I recently had the chance to try a product from the personalised gift website Mr Nutcase, so of course I went for something blog-related! I'm really pleased with the quality of the design - my logo doesn't look blurred or stretched at all and you can actually drag your image around on the mug to position it before ordering. I love how this looks on my dressing table, as I actually use it for storing stuff like tweezers, lip balm, makeup brushes and my lash curlers.

More Life (Drake) | I was in two mind on whether or not this was a favourite but overall I do like this album (well, 'project'). It's essentially a collection of studio sessions so there are bits that don't quite work and it isn't really cohesive, however it does have some great moments. My favourite tracks are Passionfruit, Blem and Skepta Interlude. If you're a Drake fan then it's definitely worth a listen.

The Psychopath Test (Jon Ronson) | This is a really quick read (I'm quite slow at getting through books and I did this in about a week) so is definitely one to pick up if you have a passing interest in psychology and enjoy awkward humour. This charts the author's mission across the world to understand what makes a psychopath, from scientology to naked therapy to prisons!

13 Reasons Why | I honestly don't think a TV show has been as talked-about this year so far as this Netflix original. It begins with a teenage girl committing suicide, however before she kills herself, she records a series of tapes divulging her reasons why, which then spread throughout the school. The narrative intersects between one of her only friends listening to the tapes, flashbacks of what happened and the inquest into her death. I personally found this compulsive viewing and incredibly telling about what it's like to be a teenager in the modern day, however I completely see how some people think it could glamourise suicide to impressionable young teenagers. I think the way the story is told almost makes it seem like you can kill yourself and still 'live on' afterwards (playing into that awful 'killing yourself to get back at people' idea) when in reality, the girl is dead and she'll never be with her former love interest in the show. One of the best parts of the show was seeing the investigation and how the school attempts to cover up their many failings.

Happy Valley | I don't know how I'd never seen this before! It's a detective drama set in a small town in Yorkshire - it's a pretty quick one to watch and I marathoned the first series in about one day (don't judge me too hard, it's only 6 episodes...) However it's addictive, edge-of-your-seat stuff! I'd definitely say the first series is stronger than the second but definitely check this out - it's now on Netflix. I rate it a lot more highly than Broadchurch too, just saying...

The Night Manager | Another much-hyped show that I'd not seen before (you can now find this on Amazon Prime). It stars Tom Hiddleston (plus a few other big names) as an undercover spy working as a night manager in an upmarket hotel. He has to infiltrate the inner circle of an arms dealer in order to bring down the entire network. It's seriously good!

Line of Duty | I have mixed feelings about this series 1 & 2 were amazing and are so worth watching (both are on Netflix), but last year's and the one that's just finished seem to have lost their way a bit. I think believability has been stretched a bit too much, but hey, it's still pretty entertaining! It's a drama about police corruption - each series is standalone in terms of story, though the same anti-corruption officer investigates each case, so there's that common theme.

Moonlight | Do you ever leave a film knowing it's moved you in some fundamental way; you know it's captured something but you can't quite put it into words? That's exactly how I feel about Moonlight. It's essentially the story of a boy becoming a man and discovering who he is in the worst possible circumstances. The acting is absolutely first class - I still can't get over Naomie Harris having filmed all of her scenes in 3 days! The way the film is put together is beautiful; a jarring juxtaposition against its subject-matter. The score is amazing, it's filmed with so much movement and the camera really focuses on the characters'  facial expressions.

Beauty & the Beast | It's kind of a given that I'd enjoy this because I'm a huge fan of the Disney original, and this is a faithful adaptation that brings all of that magic to life with lush sets and costumes and the help of CGI. They stayed true to the original and kept in all those moments we know and love but also added a bit of backstory for the characters we didn't get in the animation and a few extra jokes. One of my criticisms, though, is that the couple of new songs they created for this version didn't really add anything for me. I'm not usually a fan of Emma Watson's acting style but it kind of works in the context of a musical and everyone did ok in terms of singing - it wasn't amazing by any stretch but it wasn't Russell Crowe ruining Les Mis for everyone (which I'm still mad about.) Acting-wise, the standout had to be Luke Evans as Gaston. I do admit that the story still has problematic elements and even attempts to make it more palatable doesn't change the core of the narrative, but as an adult I can kind of set that to one side and enjoy it for what it is.

Logan | I really like the X-Men universe so when Wolverine's last-ever film got absolutely amazing reviews, I knew I had to catch it at the cinema. This is a real departure from the other films and I think it's the only big superhero film I can think of that's a 15. It's both emotionally brutal, dark and very violent, so not one for kids! Without giving away too much, it shows an older Wolverine and a world where mutants are virtually extinct and all sorts of strange experiments are being carried out to exploit them.

Arrival | It's a bold statement but I think this is going straight into my top 10 films of all time! I love anything science-fiction related and I think this pulled together all of those big ideas and put it into a beautifully simple narrative. The story follows Amy Adams's character, who is a linguist recruited to communicate with aliens that have suddenly and mysteriously appeared on earth. It's a clever, but still very 'human' story built around the idea that language fundamentally changes the way in which we perceive the world.

What are your lifestyle favourites at the moment?