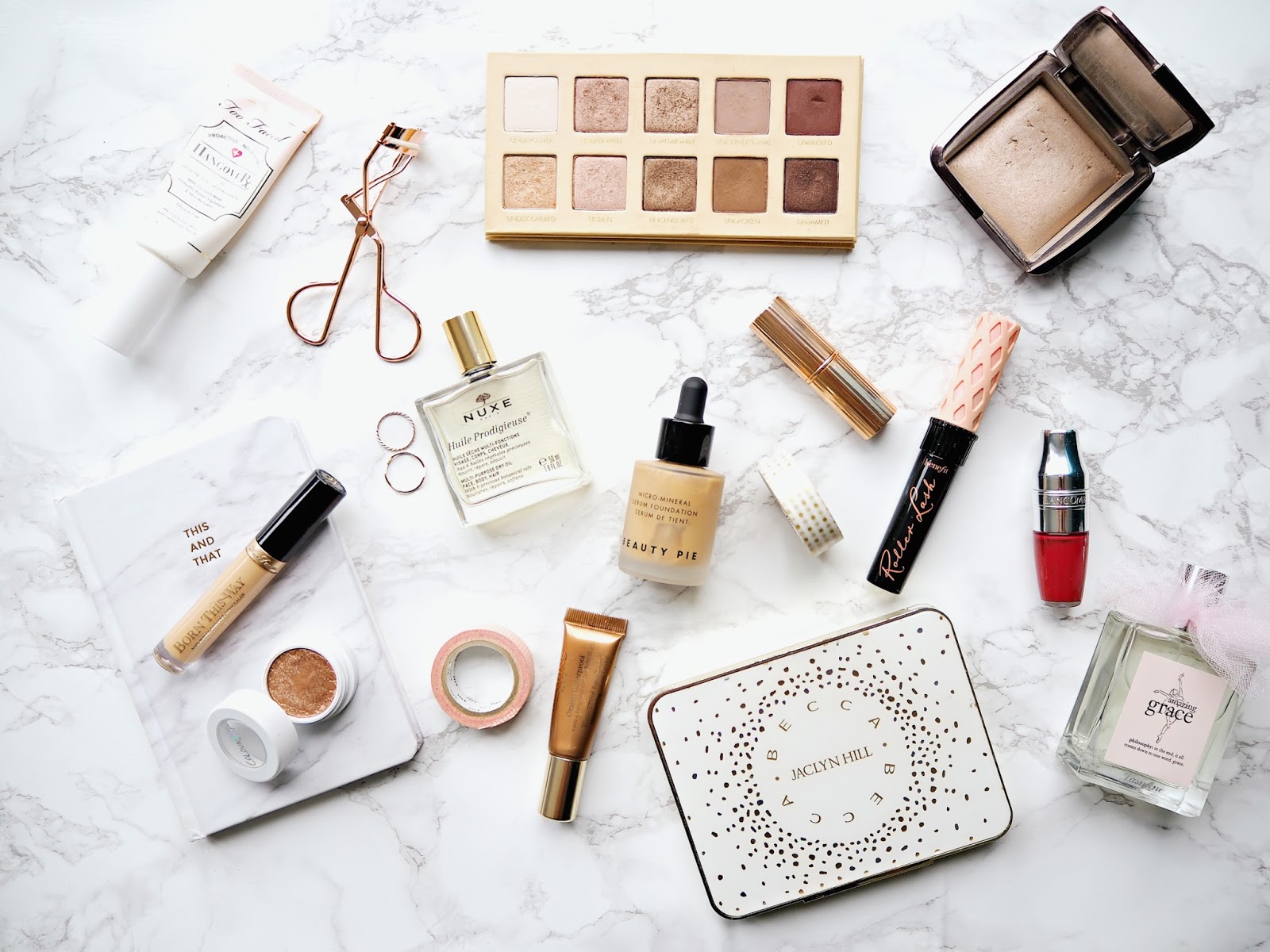 Before sitting down to write this post, I had a look back at my last little catch-up and a lot seems to have happened that I want to tell you about! And of course I have my recent lifestyle favourites in here for you.

Back in November, me and two of my close friends went to Basel. One of my friends is from France and her family live on the French-Swiss border so we went for the weekend to stay in the Alsace countryside. It's such a pretty place and we had a nice, relaxing time. There was a walk through castle ruins, fireside cocktails and Christmas markets! You can see what I got up to on my Instagram tag.

At the start of December it was one of my other friend's birthdays and she lives back in Manchester, so I went home for the first time since moving to Woking (I was just so busy with exams and stuff that I hadn't had the chance!) I worked from home in the morning then took the afternoon off to go down on the train and do a bit of Christmas shopping. Then in the evening, I met with my friends and the rest of the party for dinner at Thaikhun in Spinningfields (a Thai street food-style restaurant) then we went on for cocktails at the Alchemist (they have so many crazy concoctions like ones that blow steam, change flavour and so on) then on to Neighbourhood (another bar in the area which often has live music on). After a bit of a lazy morning following a bit of a late night, I went to the Christmas markets and out for dinner with my mum before meeting back up with my two friends to have a few drinks at Alberts Schloss, which also had some live music. Finally, before heading back on the train on Sunday, I met another one of my best friends for brunch at Bill's and a good catch-up. All in all; an action-packed weekend that was a lot of fun and a great way to see off the latest lot of exams.

My New Job & On the Move Again

Now for the exciting news: I got a job! I have been on a graduate scheme since September 2015 and just before Christmas I was made an offer for a permanent role. I'm going to stay on the graduate scheme technically until September, which is better for me as I still get a lot of development, and then when I come off it I'll be an underwriter in a team that does the sort of stuff I really want more experience of.

It's also in a much better location for me. I currently live in Woking which is very expensive and as I have to live very close to the station (due to having such a long commute once I'm actually on the train), it's really not a nice part of town (though I know there are some really lovely parts of Woking further out, I just didn't want to add another leg to my journey) so I'll look forward to moving away, in all honesty. I'm off to Birmingham, which I know and love having gone to university there. It's a really central location geographically and just has all the shops and amenities I want within a few minutes walk of the office. I'll be paying half the amount in rent (for a more spacious place in a nicer area) and my commute will be less than half what I've been paying down here. I also will be living much closer to work and overall I think everything will be much more convenient! It will be a shame to be further from my boyfriend again but it's not as far as Manchester (I moved home for two years after graduating) and hopefully he'll be able to join me soon.

There's just the immediate stress of having to find somewhere to live at pretty short notice. I think I'll be up in Birmingham looking for a room to rent when this post goes up, so wish me luck!

I was lucky enough to get the 3 non-Bank Holidays between Christmas and New Year off work, meaning from the 24th of December to the 2nd of January, I wasn't in work at all! We went to my grandparents' in Warwickshire for Christmas (side note: if you want a nosey at my presents, check that out here) and spent a few relaxing days there with board games, family, eating and drinking! I then got a quick train down to my boyfriend's place, where we spent time with his family. We went into London one day, which was rammed, so I didn't do much shopping! However we went to the Burger and Lobster, which is always a great shout! We also went to see the film Passengers, which I was actually really disappointed with. I love a space epic (Interstellar especially is one of my favourite films of all-time) and this had such an interesting premise. However it was ruined when a promising start went down a bit of a predictable route following a quite frankly creepy twist! (See it and you'll know what I mean...)

For New Year's it was a brief trip back up to Manchester. Me and my boyfriend went with some of my best friends to a show at the Comedy Store, which was really great! Every act was spot-on but annoyingly the event page seems to have vanished now so I can't look up who they all were to check out the rest of their material... The first 3 were conventional comedians telling funny stories and anecdotes and the finale was the Noise Next Door; an improv band who had me in stitches. If you've never been to this venue then I'd recommend it; every last Sunday of the month they have a new comedy night for about £4 that's also really good. Afterwards we went to the Liquor Store, which to be honest was my kind of vibe. I'll occasionally be in the mood for a club but definitely not on New Year's Eve! It was nicely busy but it was still relatively easy to get served and we met another cool group of people. We also luckily managed to get a taxi home without any faffing. After we headed back south I had a day free to run a few errands, but now it's back to reality...

Westworld | This show was my absolute addiction before Christmas! It takes a while to get into (the first episode is quite confusing but by the second, I was hooked). Essentially it takes place in the future where rich people's idea of fun is to go to the robot-populated theme park Westworld where they can pretend to be cowboys for the day. The robots are extremely lifelike and guests can kill, hurt and harm them (and the robots' memories are wiped regularly) but the robots can't harm the guests. Are you with me? Because it gets a lot more complicated and twisty and turn-y! I thought the show was brilliant in terms of keeping me guessing but also posing some very interesting questions.

Black Mirror Season 3 | Black Mirror is back and it's now on Netflix instead of Channel 4. I must say that Episode 1 got me off on the wrong foot with the new series because it was one of the weakest episodes from the entire running of the show but also it made it seem like the series had been totally Americanised when it actually has a mix of British and American settings and actors. I didn't feel the overall quality was compromised by having more episodes either; each instalment still brought a new, thought-provoking concept to the table. If you aren't familiar with this series; each episode is a self-contained story taking place in some sort of technologically-dystopian reality. I enjoyed the episode San Junipero the most, however the darkest and most hard-hitting for me was probably Shut Up and Dance.

Reign | This show has been my ultimate guilty pleasure recently! It's one of those things I can just stick on without having to concentrate too much and it's highly addictive. It's essentially the story of the early years of Mary Queen of Scots, but with fantasy elements, a lot of teen romance and historical-inaccuracies! I pretty much marathoned this on Netflix over a few weeks and now I'm done with it, I'm eagerly awaiting the next (and final, *sobs*) series.

The Man in the High Castle Season 2 | I absolutely raved about this series in my year-end lifestyle favourites last year and there's a new series out that I powered through last month with my boyfriend. It's just as amazing as the last one and raises as many new questions as it answers! If you don't know about this series; it's set in an alternative reality where the Nazis won WW2 and the USA is partitioned, with some of it being under Japanese control and some of it German-occupied. There's a big twist though...

The Girl on the Train | I'd actually never read this book but so many people loved it that I quite wanted to see the film. I went into it without knowing anything about the story and I kind of preferred it that way! However the basic gist is that a girl called Rachel passes a house and watches its inhabitants every day as she goes to work. A murder is then committed and she becomes a bit too involved in its investigation after she realises its connection to her past. As someone who hadn't read the book, I found it gripping, well-acted and full of twists. I will say, though, that the final act is a bit weak in comparison to the tension that builds during the rest of the film.

Aladdin | Back at the end of November I went to see the musical of Aladdin on the West End stage. If you were a fan of the Disney film, I think you'd love this! It's a lot of fun, the staging is visually stunning (I honestly don't know how they created some of the scenery like the magic carpet ride, but it looked incredible) and there are all of the songs from the film in there. I also think the Genie absolutely *made* the show! The actor didn't just copy what Robin Williams did but put a new spin on the character and brought the anachronistic pop culture references into 2016, which I loved.

What did you get up to over the festive period? What have been your lifestyle favourites recently?