Which Do You Need? | Nars Velvet Matte Skin Tint vs Urban Decay Naked Skin One & Done 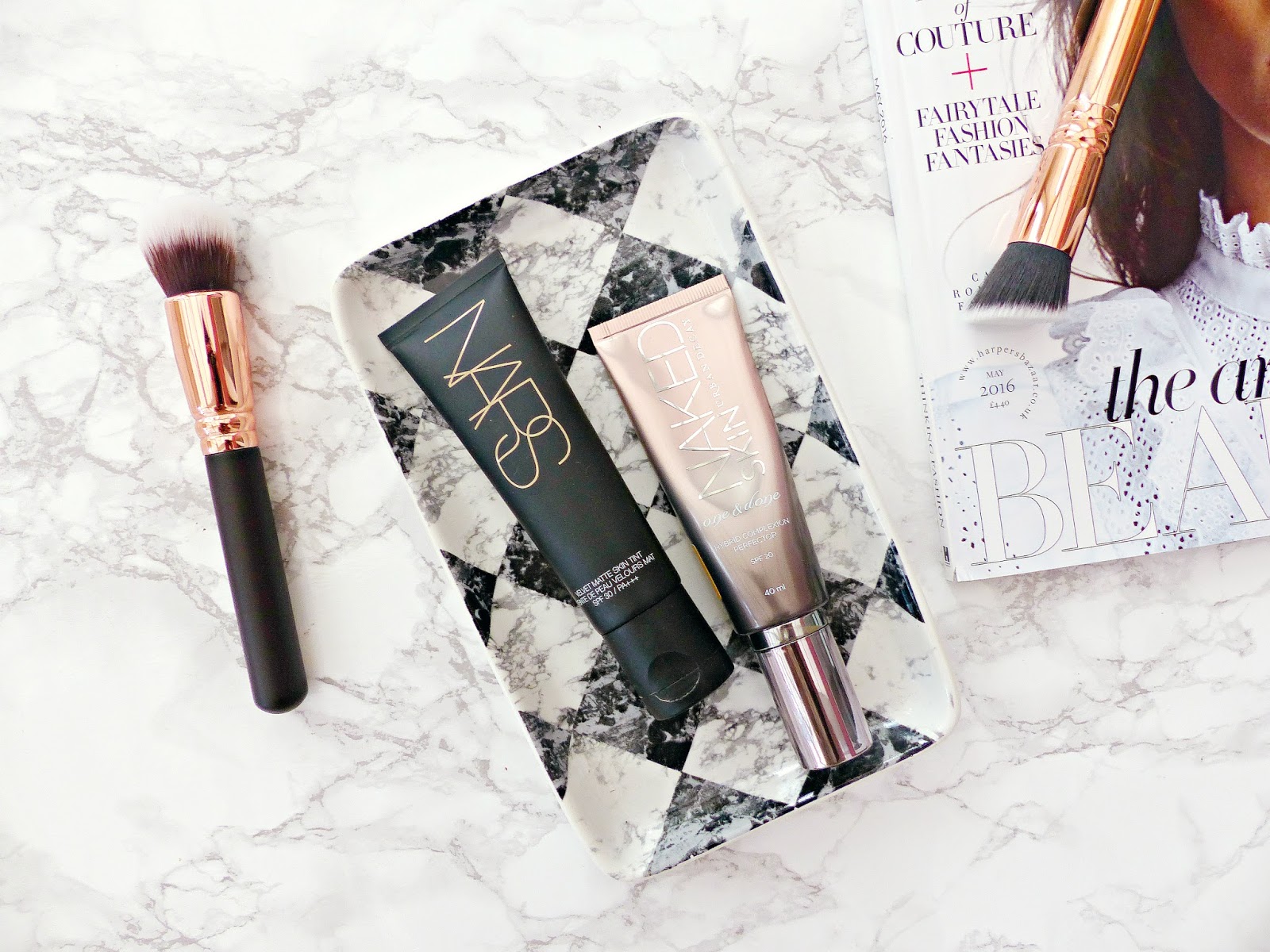 When it comes to makeup, the one thing I always appreciate is a good base. Two of my favourite brands released lightweight bases this year and I just had to snap up both! However if you're not quite decided which one is for you then I hope this post helps you make up your mind.

The Nars Velvet Matte Skin Tint costs £30, whereas Urban Decay's Naked Skin One & Done Hydrid Complexion Cream costs £25. It isn't a huge difference but also bear in mind that Urban Decay is also stocked through sites that offer regular discount codes for their products (like Feel Unique and Debenhams), whereas Nars has fewer stockists and is usually excluded from promotions. All in all though, if you're willing to spend £25 on a foundation then it isn't going to be a huge leap for you to stretch to £30. It is also worth noting that the Nars gives you 50ml in the tube whereas Urban Decay gives you 40ml so if you think about it the price really isn't a deciding factor.

The packaging is pretty similar; they both come in travel-friendly tubes. The Nars comes in their usual sleek and simple black matte packaging (that does tend to get a little dirty!) whereas the Urban Decay comes in something a little fancier; a kind of ombre-chrome tube with silver lettering. The Nars has a simple flip open top and you squeeze the product right out, though it does tend to get a little messy in the lid.

The Urban Decay instead has a pump and the lid feels a little more secure. The pump helps me better control how much product it dispenses, however it can be a bit annoying to have to pump a couple of times before anything comes out (I can imagine it being really hard to get the last little bit out when it's nearly finished).

Nars is the clear winner in this category with 12 shades against Urban Decay's 6. I think 12 shades is pretty impressive for this kind of light base and Nars seems to cover a lot of the spectrum even just within that. I wear St Mortiz in the Nars, which is the same as my shade in their Tinted Moisturiser. The medium, yellow-based shade is spot on for me right now however I do think it may be a bit pale during the Summer.

Urban Decay do cover quite a lot of the spectrum in their 6 shades however I can see a lot of people (like me!) falling in between colours and not quite being able to find a perfect match. I also think they could do with more variations in the undertones. I wear Medium-Dark in this, which is a bit too dark at the moment and leans more towards an orange base than yellow, however it matches my slightly darker neck fairly well and once my concealer and powder is done, it looks fine. I do think this is going to be perfect once I've been on holiday though so I'm kind of saving it for that. 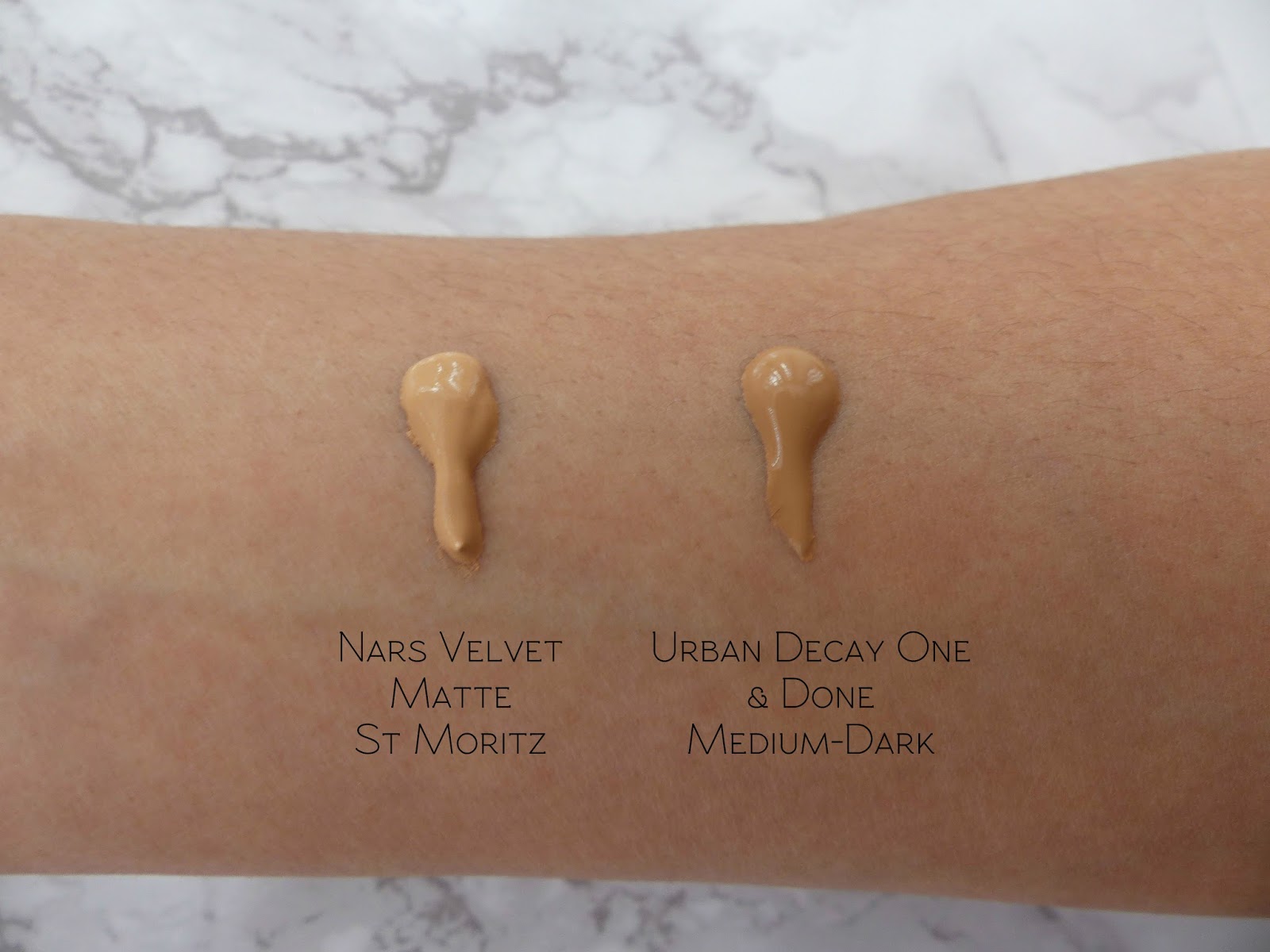 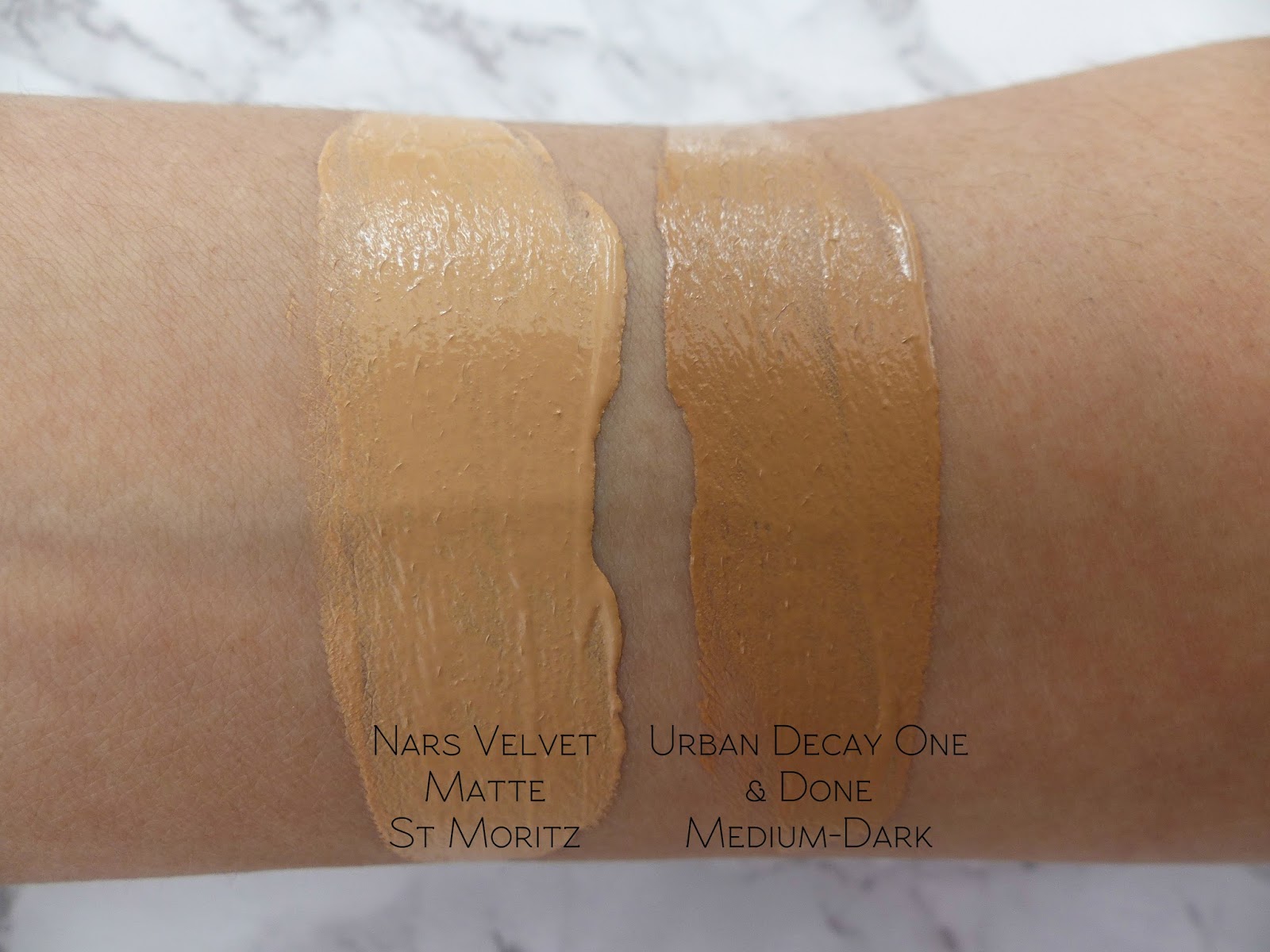 I actually find them both very similar in texture. They're much thicker than you're usual quite light and more watery tinted moisturiser. They apply pretty similarly, though I think the Nars feels a tad heavier and more matte on my skin. I prefer to apply my bases with brushes and with these I tend to go for my Sephora Pro Airbrush #55 or Zoeva Silk Finish. They both blend out really nicely, though I'd say the Urban Decay sits on my skin slightly more naturally. You can use more of a buffing motion to build the coverage where you need as I find both of these apply quite lightly in the first instance but are so easy to build on. On this point I do think they're pretty evenly matched.

I was actually expecting both of these to be pretty lightweight based on the names and barely more than a tinted moisturiser. However they're both considerably fuller than I'd initially thought. The Nars gives really good coverage and a semi-matte finish that's not too drying - the name is actually spot on in my opinion. I'd say that when you first apply it it's like a light foundation, however once I've built it up in my problem areas it's definitely more of a light-medium look.

The Urban Decay is a tad less matte and more hydrating on my skin, however it's still what I'd describe as 'satin'. It keeps my shine at bay, it isn't dewy and doesn't go greasy on me, however it still feels a little more hydrating than the Nars. I personally find this has even more coverage. Again it's relatively light when you go in with one pump for your entire face but it's definitely more like medium coverage when I add a little more to the parts of my face where makeup tends to fade fastest. I didn't find that either of these settled into any pores or imperfections and enhanced them, which is good. They're both comfortably 'everyday' bases for me though - they can be applied lightly on a hot day at the beach or are easy to build on if you're going out for a meal.

I personally think the Nars lasts 'well' but probably isn't the best I've ever tried. I generally do need to powder my t-zone around lunch time as the non-drying formula does allow a little bit of shine through as they day goes on. If I don't touch up with concealer, I'd say this looks as it did when I applied it in the morning for around 6 hours before it starts to break down a little bit around my nose and under the eyes and lets a bit of dewiness through. However it isn't something that a 2-minute concealer and powder touch-up can't fix.

The thing that really impressed me about the Urban Decay was how long-wearing it was. Although it's a little more hydrating on my skin, I actually don't feel like it lets through shine during the day  or starts to wear off my oiler patches and I find I don't really need to touch up (unless I've been blowing my nose a lot!) As we move towards hotter weather, I think the Urban Decay is going to be the winner for me based on this alone.

The Nars contains SPF 30 and PA+++, which I think is pretty impressive. It also contains antioxidants Vitamin C and E and claims the Rose Fruit Extract helps minimise pores and blur imperfections. I think the sun protection is great and makes it perfect for the current overcast weather in the UK right now when you still want some level of resistance to sun damage. I can't say I've noticed my skin looking dramatically more healthy from using this but at the same time, as I mentioned, it doesn't emphasise my pore or fine lines so maybe there's something in the claims! It does profess to last all day, which I feel like it kind-of does but not without a bit of a touch-up on my combination skin.

The Urban Decay claims to do just about everything short of curing cancer on the website! I can certainly agree with the all-day wear aspect. It contains SPF 20 but isn't broad-spectrum like the Nars and the UVA protection isn't as good either. Apparently the 'light-diffusing spheres makes flaws seem to disappear' and it also claims to minimise the look of pores and make the skin look firmer and more radiant with vitamins and peptides. Whilst I think that's over-egging it a little bit, I find it does give a very 'perfected' look to the skin (more so than the Nars) and whilst I doubt it's making my skin look more flawless over time, I do feel it stops imperfections being emphasised by not 'settling' in to them.

Which do I prefer?

I feel like such a traitor, as a Nars girl through and through, but I have to say Urban Decay wins for me! I do still really like the Nars Velvet Matte but Urban Decay's One & Done just seems to sit on my skin in a nicer way, it gives a more flawless appearance, it feels a little more hydrating yet it also lasts longer. I've really enjoyed Velvet Matte for Spring but I think Summer belongs to One & Done...

Have you tried either (or both!) of these bases? What did you think of it (or which is your favourite)?