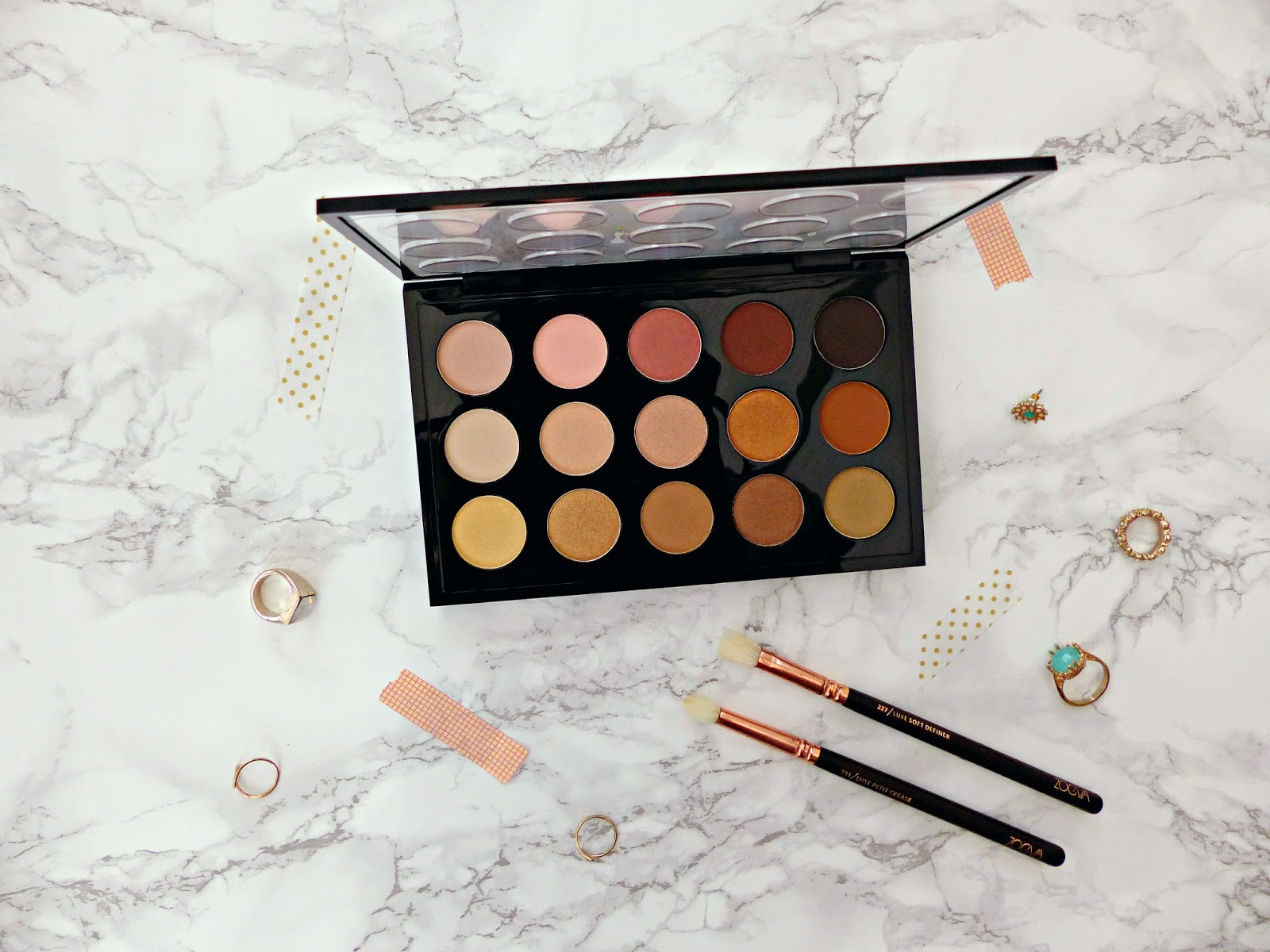 I first wanted the MAC Warm Neutral Palette (£65) about a year ago, but I inadvertently ended up building a custom pro palette after being bought a couple of singles as a gift so the idea was shelved. I entered Beautylymin’s giveaway on a whim and by some miracle won (thank you so much again for such a fantastic prize!) So I’ve now tried both this palette and the individuals! You can read about my pro palette here but this post is all about the pre-made alternative.

The pre-made 15-shade MAC palettes cost £65 each, which is pretty steep! However when you consider that building your own costs: £10 for the palette + £2.50 for the insert + 15 x £10 for the eyeshadows (£162.50 in total), it doesn’t seem so bad. Obviously you would build that up over time and if you’re lucky like me, get a huge chunk of them for free through loyalty points, but the pre-made palettes are clearly the more affordable option. The individual pans aren’t removable like in a customisable palette and some say the quality is not the same, but we will get into that later!

MAC Warm Neutrals is not your average warm neutral palette despite what the name would suggest! There’s a surprising variety of shades and MAC have definitely avoided just giving us 50 shades of brown in this palette. Having said that, it definitely could've done with one or two more matte brown crease shades. 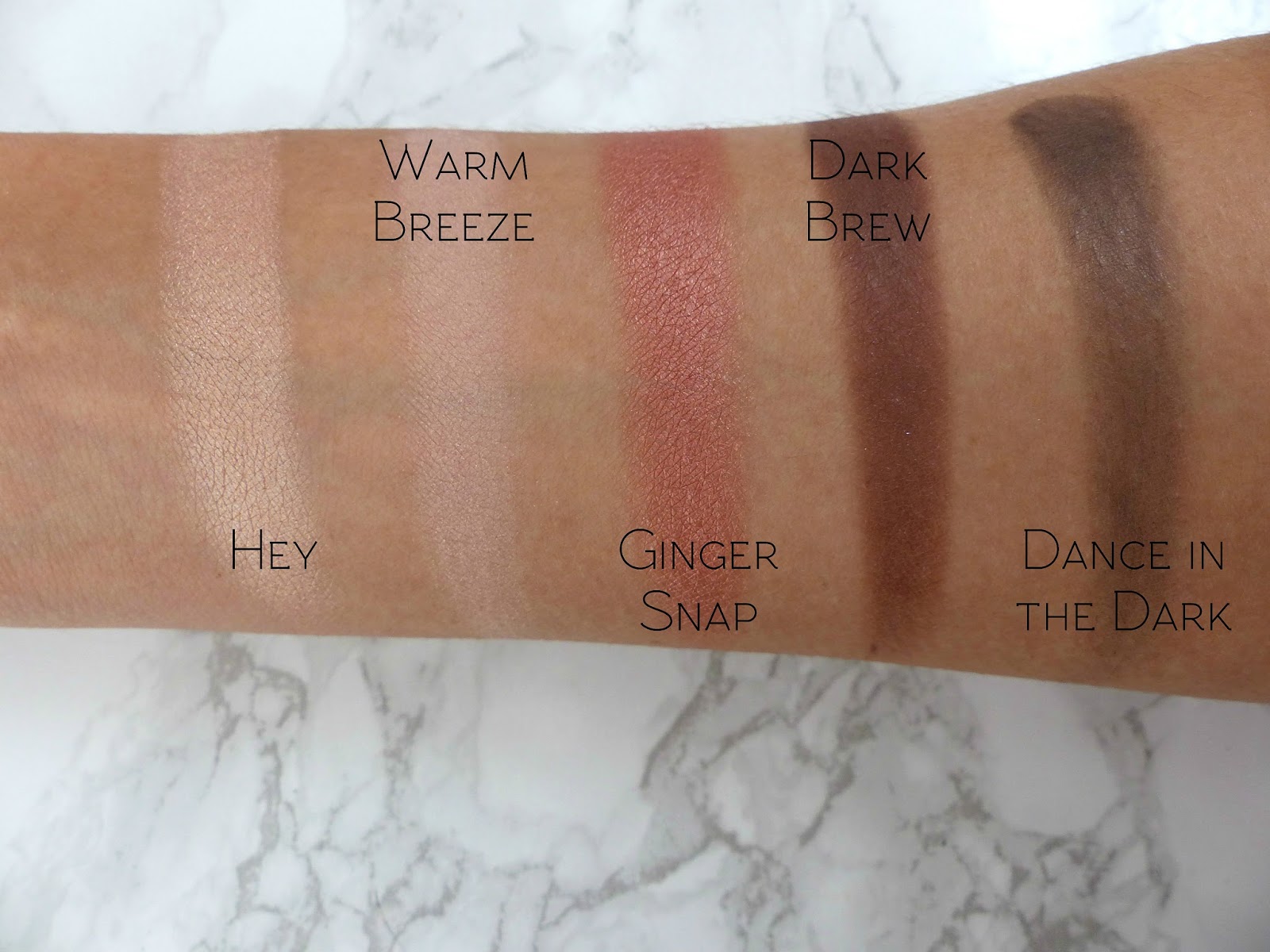 This is a peachy off-white colour in my favourite Veluxe Pearl finish. I use this as an inner corner highlight and it has a lovely metallic sheen to it.

I have to say this isn't one I reach for that often. It's again a slightly peachy colour but has a matte-look finish. On paler skin this would probably make a nice lid shade as it isn't too chalky and has decent colour payoff, however for me there's another shade I prefer for that in this palette.

This is a finish I really love; a metallic shimmer. Ginger Snap is hard to describe, though I suppose it's a pink and has been said by others to have rosy hints as well which I can agree with. It has a really nice texture and pigmentation and I like using a little bit in the crease to add a bit of colour to a brown eyeshadow look.

This is a deep, rich chocolatey brown with flecks of glitter in it (though these aren't too obvious, they just make it more wearable than a matte). I wasn't sure I'd like this but actually it's nice and creamy in texture and blends so easily to add a bit of smokiness to the look.

Dance in the Dark (Matte)

This is hard to describe as it looks black without quite being. I've mentioned before that MAC's Matte finish isn't my favourite and this isn't my favourite from the palette for similar reasons; it's a bit hard to get the colour payoff and it isn't creamy enough to be easy to work with. 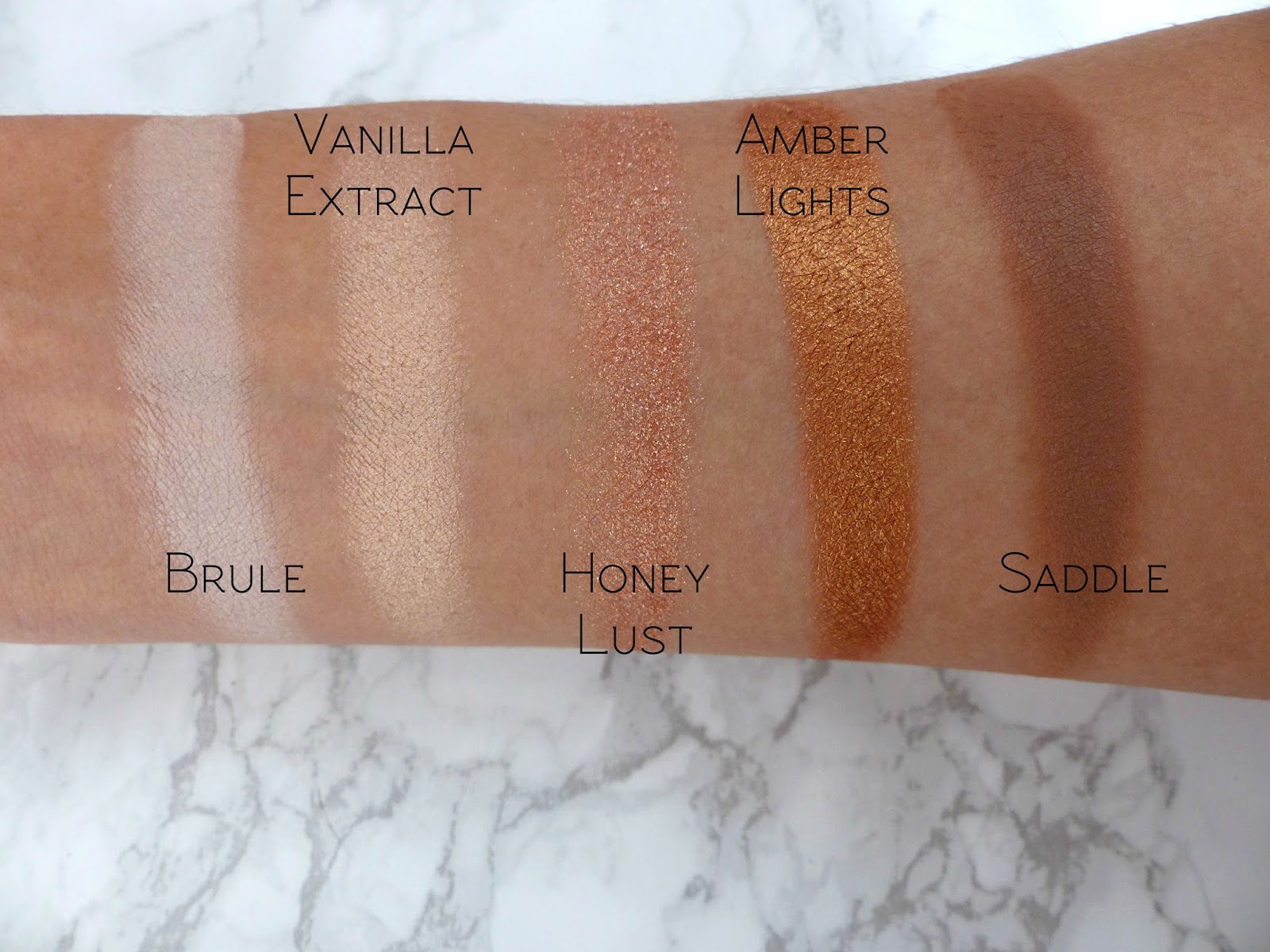 This is a light beige matte-look shade that again would work well for paler skin but I actually don't reach for very often. However the formula is really nice and it's definitely the most pigmented of the very light shades in this palette.

This is a really light gold shimmer that makes a pretty inner-corner highlight when I want something a little warmer and more natural on me than Hey. However I don't think it's quite as pigmented enough to use as a lid colour without building it up quite a lot, which is a shame.

This is the finish most MAC-lovers aren't a fan of. Honey Lust is a really stunning colour but it's just a bit sheer and has a lot of glitter in there. I usually take it on my finger and pat in in the centre of the lid to add a bit of dimension. It's a gorgeous peachy-bronze so I do try to work with it.

This is one I actually already have, so I was interest to compare it to my single version. It's a bright orange-gold and I think it's exactly the same in quality, pigmentation and texture as the individual version I have of this. It's so creamy and has insane colour payoff. I love it worn alone all across the lid with a berry lip for winter.

Some people actually buy the entire palette just for this shade as it isn't available on its own in the UK. This is actually really soft and creamy in texture compared to every other MAC Matte I've tried and that pigmentation is amazing! It's a warm medium-dark brown that's my go-to crease shade. Definitely a stand-out for me. 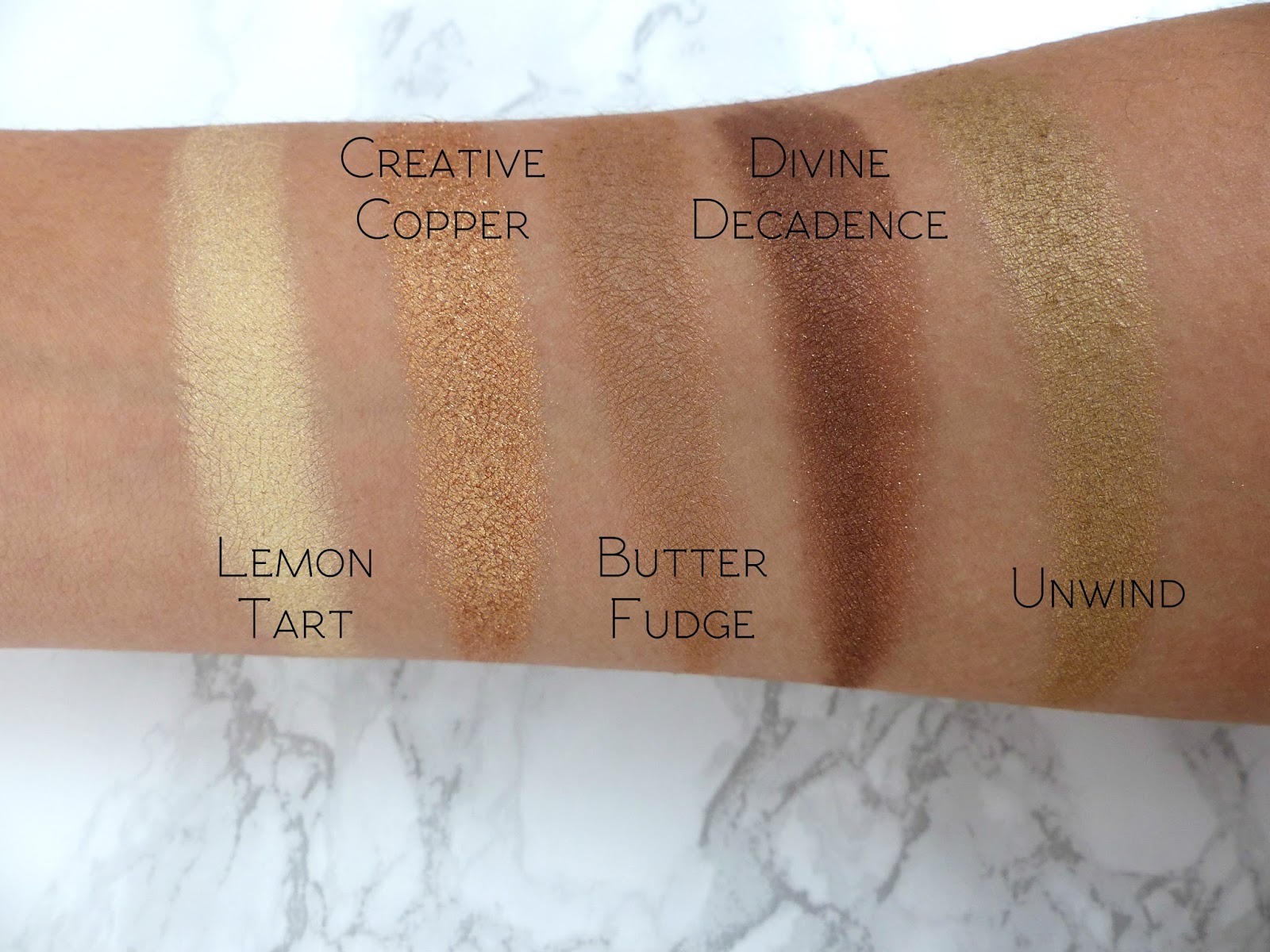 This is the only shade that isn't really my bag but I gave it a go anyway! It's a bright (almost neon) yellow-gold in the lovely Veluxe Pearl finish.

I was surprised when I looked up that this was a Lustre finish as it's not 'glitter and not much else' at all; it's quite glittery but still has a buttery texture. It's a very true gold and is perfect when I don't want something quite as bold as Amber Lights.

This is a fudge-coloured light-medium brown shade with a very slight pearly sheen to it. The texture is so lovely and effortless to apply and the pigmentation is impressive despite it being relative matte-look once applied. I love this as a lid colour as it's the perfect base for any look you can create with this palette.

This is a bronzy-brown colour I use for the outer v to create a nude smoky eye. It isn't the creamiest formula in the world but I don't mind especially as I tend to pat this on with a flat brush.

Another lovely sheeny shimmer Veluxe Pearl formula. The colour is a sort of olive and definitely isn't as scary as it looks in the pan. This all over the lid with a bit of Saddle through the crease is lovely.

I definitely don't agree that these eyeshadows are of lesser quality that MAC's singles, I think it's simply a case of you not being able to avoid shades or finishes you may have otherwise been able to. If I picked up one or two of these in store and swatched them, I wouldn't have bought them for my customisable palette. MAC's single eyeshadow range definitely has a few duds in it. Having said that, for a neutral eyeshadow lover liked me, 99% of these shades are spot on and there are still a few unusual shades in there to differentiate it from anything else in my stash. If you don't want to splurge on building your own then definitely pick this up instead.

What are your favourite MAC eyeshadows? Are you team pro palette or team pre-made palette?