New in at the Drugstore | Haul, First Impressions & Swatches 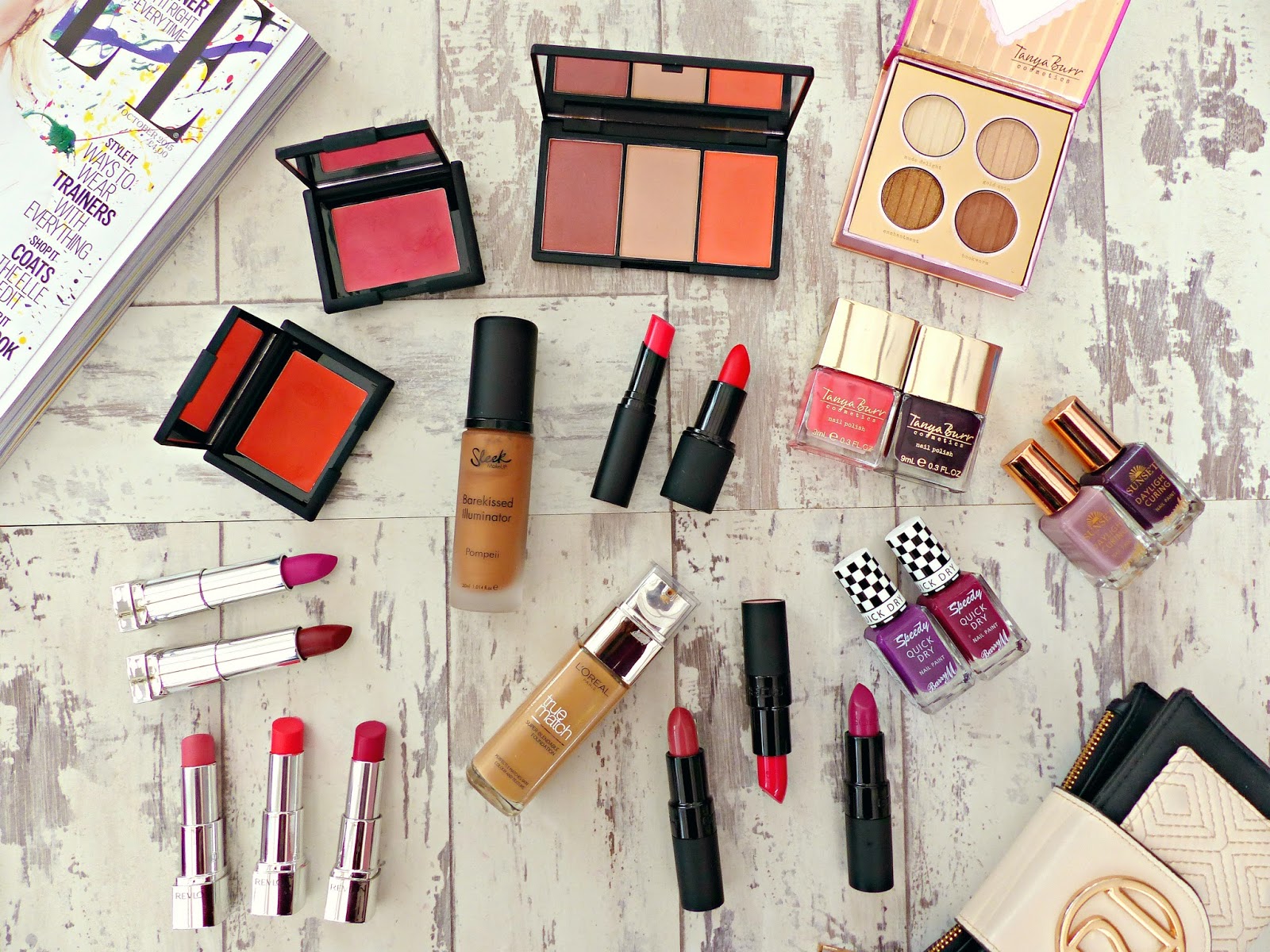 Damn, that is a lot of lipstick...This was almost a 'new drugstore lip products' post but I thought I'd do a round-up of all the new products I liked the look of at the drugstore for the start of Autumn. It goes without saying that I didn't buy this all in one go! This has been a good two months in the making. I've done some swatches as well as shared my first impressions. There's a lot to get through so let's get started... 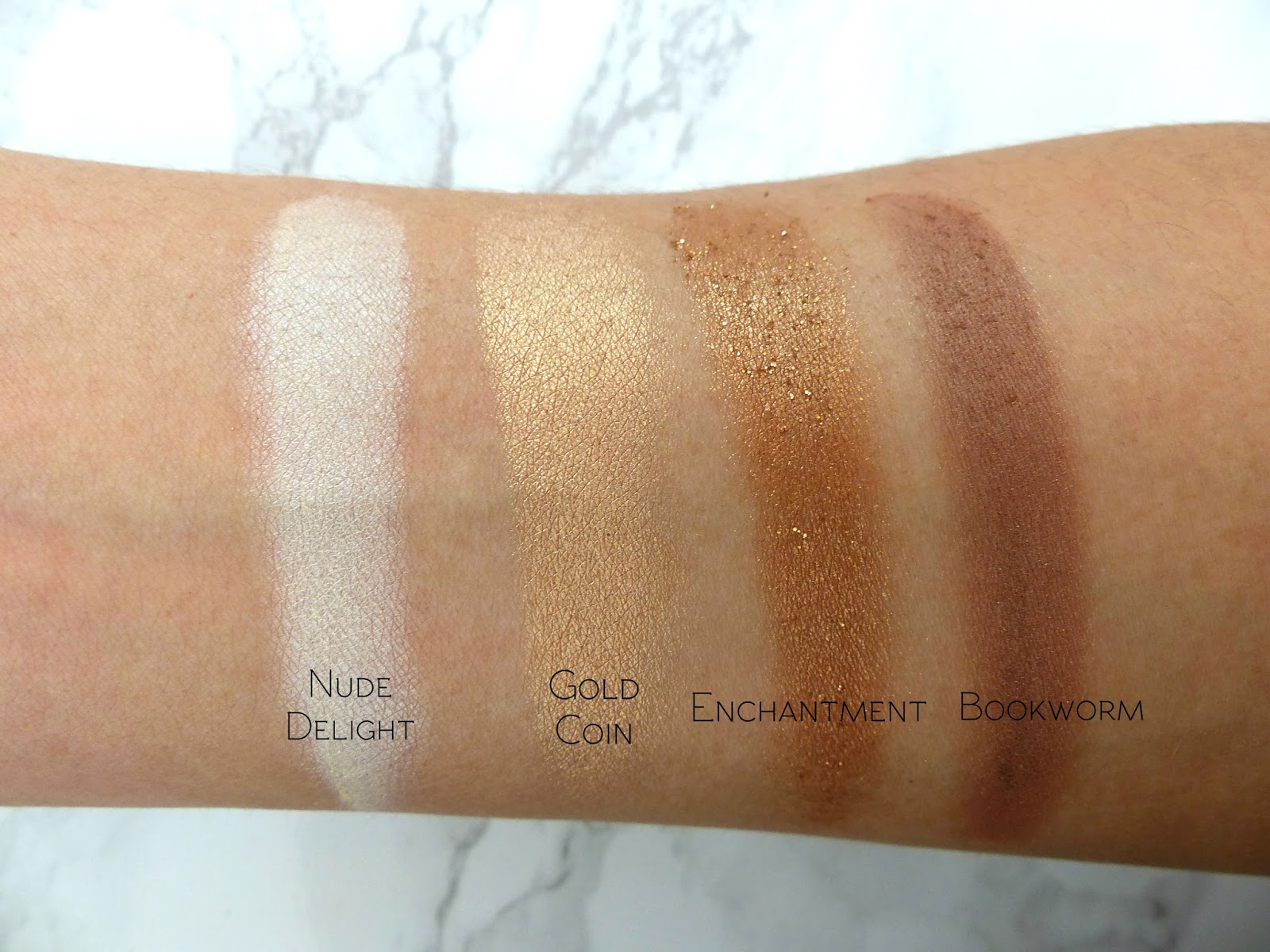 When I saw Tanya Burr had added more makeup to her cosmetics line I was really intrigued to give it a go, and with this palette coming in at just £6 there was no reason not to! The Hollywood palette had my name written all over it, although I used to wear gold eyeshadow all the time my collection was lacking a little quad like this. The quality, texture and pigmentation of these shades is really nice. I've only tried it twice but so far so good! You get 4 shades: an off-white matte (Nude Delight), a sheeny light gold (Gold Coin), a deep glittery gold (Enchantment) and a semi-matte with a little shimmer in a warm mid-brown (Bookworm). 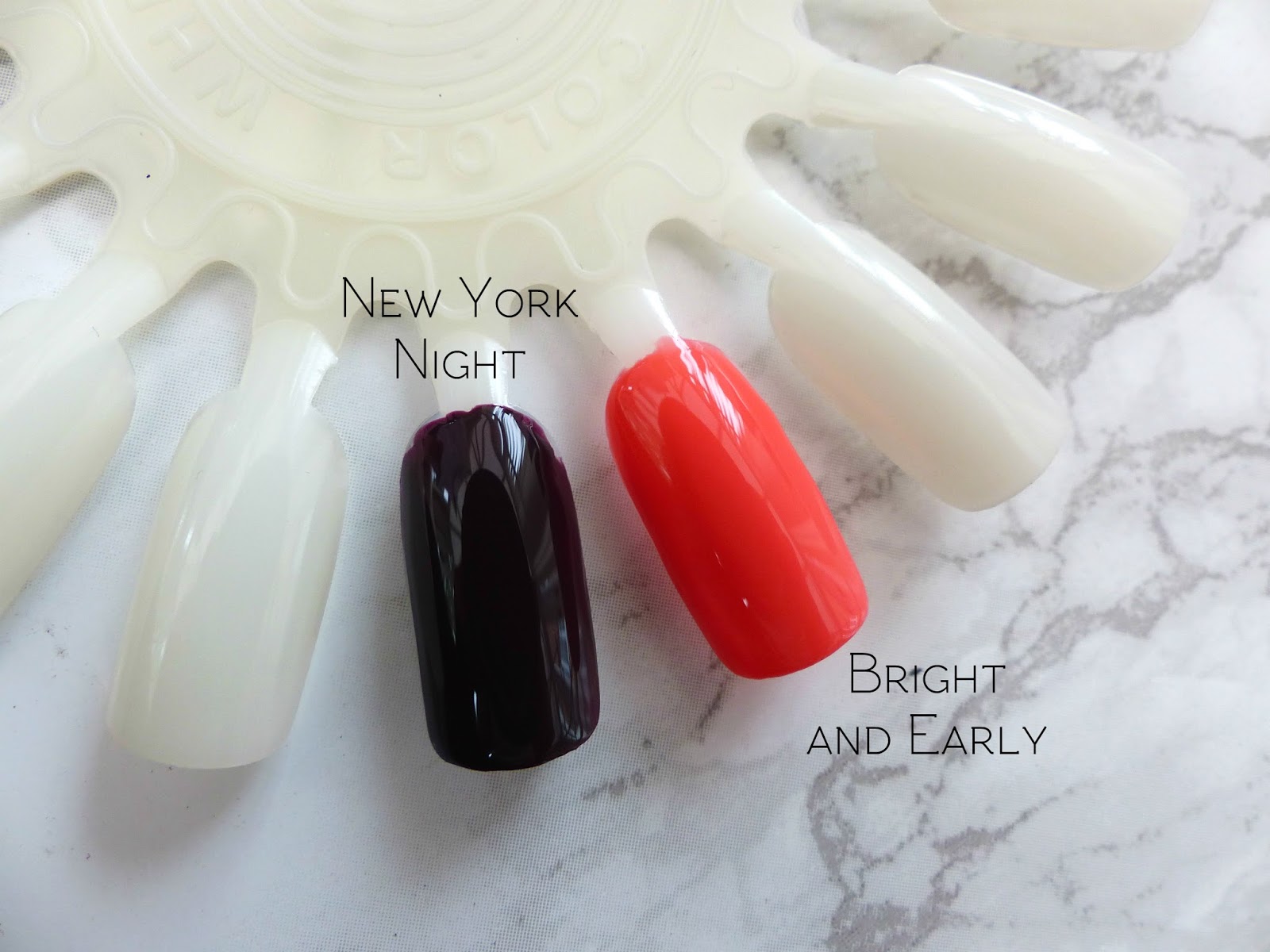 I don't think these are new shades, I believe they're just in new packaging however I never tried the original nail line so I thought I'd give these a go. The packaging is really nice and quite premium (in the same vein as Nails Inc's). The shade selection is beautiful and I chose New York Night (an almost black deep plum) and Bright and Early (a vivid neon peach). New York Night was fairly opaque after one coat but I went for two to be on the safe side. Bright and Early seemed to apply a little unevenly so I went for three. The consistency of the formula as well as the shape of the brush are really nice however there's on thing that lets these down for me and that is the staying power! With both shades they barely seemed to last 24 hours before they began to chip. 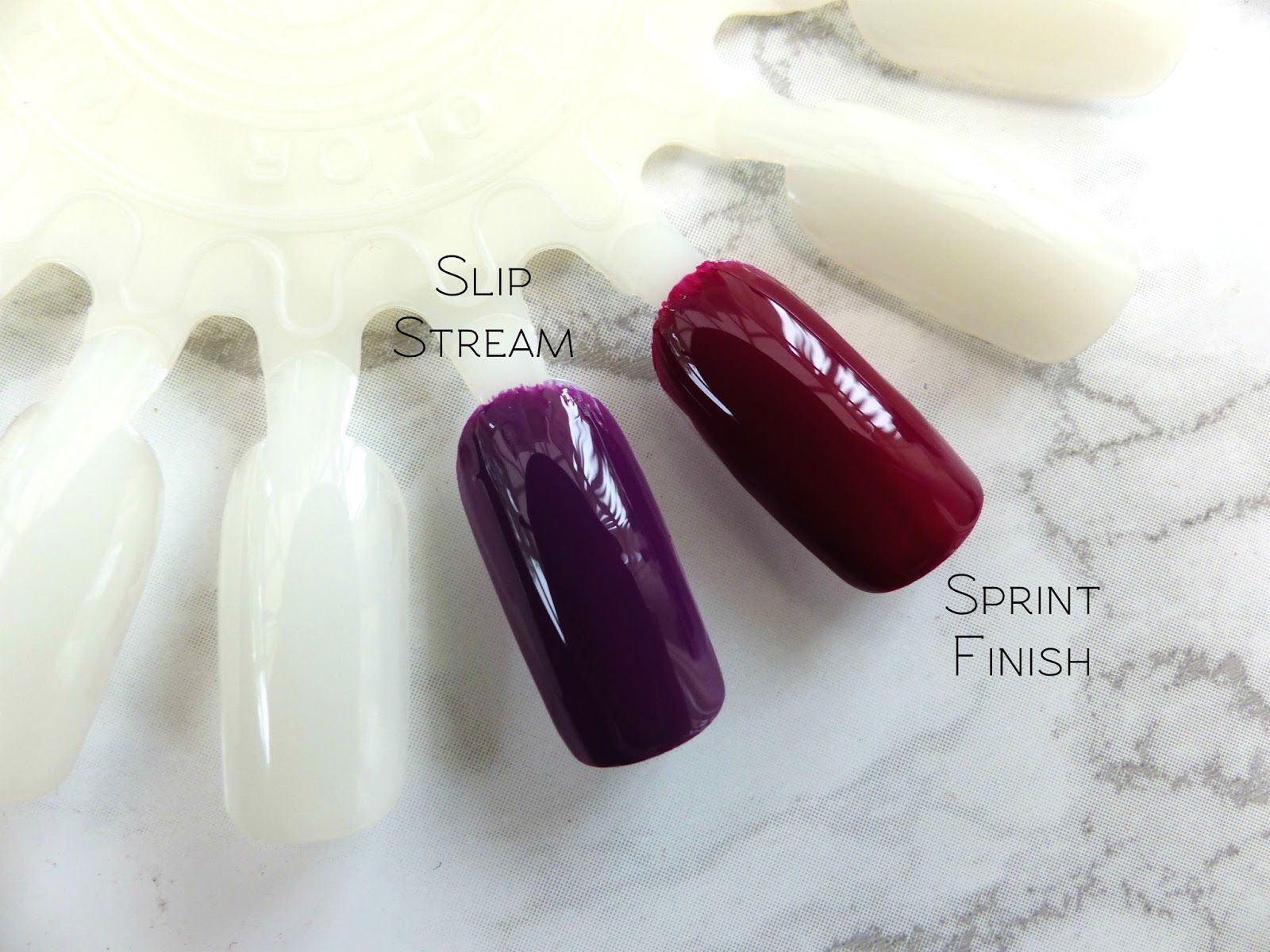 I love the Barry M Speedy Quick Dry formula so when I saw there were some new shades for Autumn/Winter I had to snap a couple up. Slip Stream is a true dark purple shade whereas Slip Stream is a cranberry/pomegranate tone. I haven't given these a go yet but if they're anything like my others from this range I'm sure I'll love them. 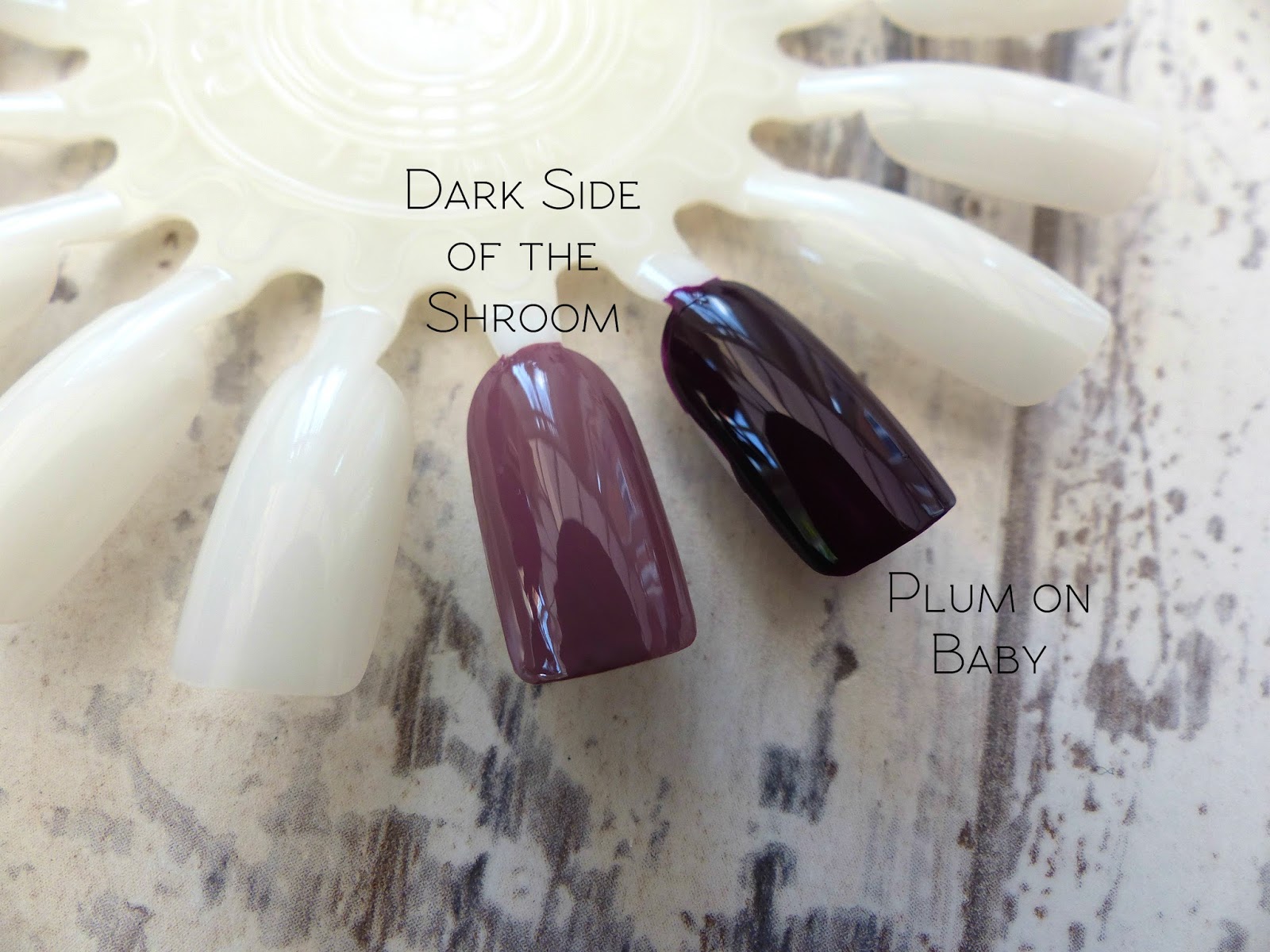 I actually spotted the new Autumn/Winter Sunset Daylight Curing shades after the Speedy Quick Dry ones, however I think I actually prefer these! Again, I only just bought these so haven't tried them out fully. I will definitely update you on these as I found the quality varied between shades in the original Sunset line and personally I didn't find the topcoat made much difference. I chose Dark Side of the Shroom, a taupe-lilac-mushroom colour and Plum on Baby (that's going off the bottom of the bottle but I believe the full name is Plum on Baby Light my Fire), a deep plum shade. As always, great names! I'm wearing Dark Side of the Shroom at the moment and it amazingly only needed one coat! I love it so far so I'm hoping it has good wear time.

I'm not sure if this is a UK-only thing but L'Oreal have re-released their classic True Match Foundation with a new formula and some additional shades. I chose 6.5W Golden Toffee as 6W still seems conspicuously absent from the UK line-up. I have to say it's still too dark so I'm not sure why, when they did a whole re-release, they couldn't simply bring out Shade 6W. I still gave it a go a couple of times and for me the finish is similar to the original formulation, although I think it's a little more long-lasting. Bizarrely they seem to have added a small amount of golden shimmer in as well. I'm not sure why (surely the overriding feedback on True Match from customers wasn't 'it's not shimmery enough'?) but it's not hugely noticeable on the skin. Still, I'd prefer to decide if I want to wear an illuminator or not, not have one already in my foundation. Overall I'm really unsure on this but on the bright side the packaging is far sleeker, less awkward and generally more visually-pleasing. 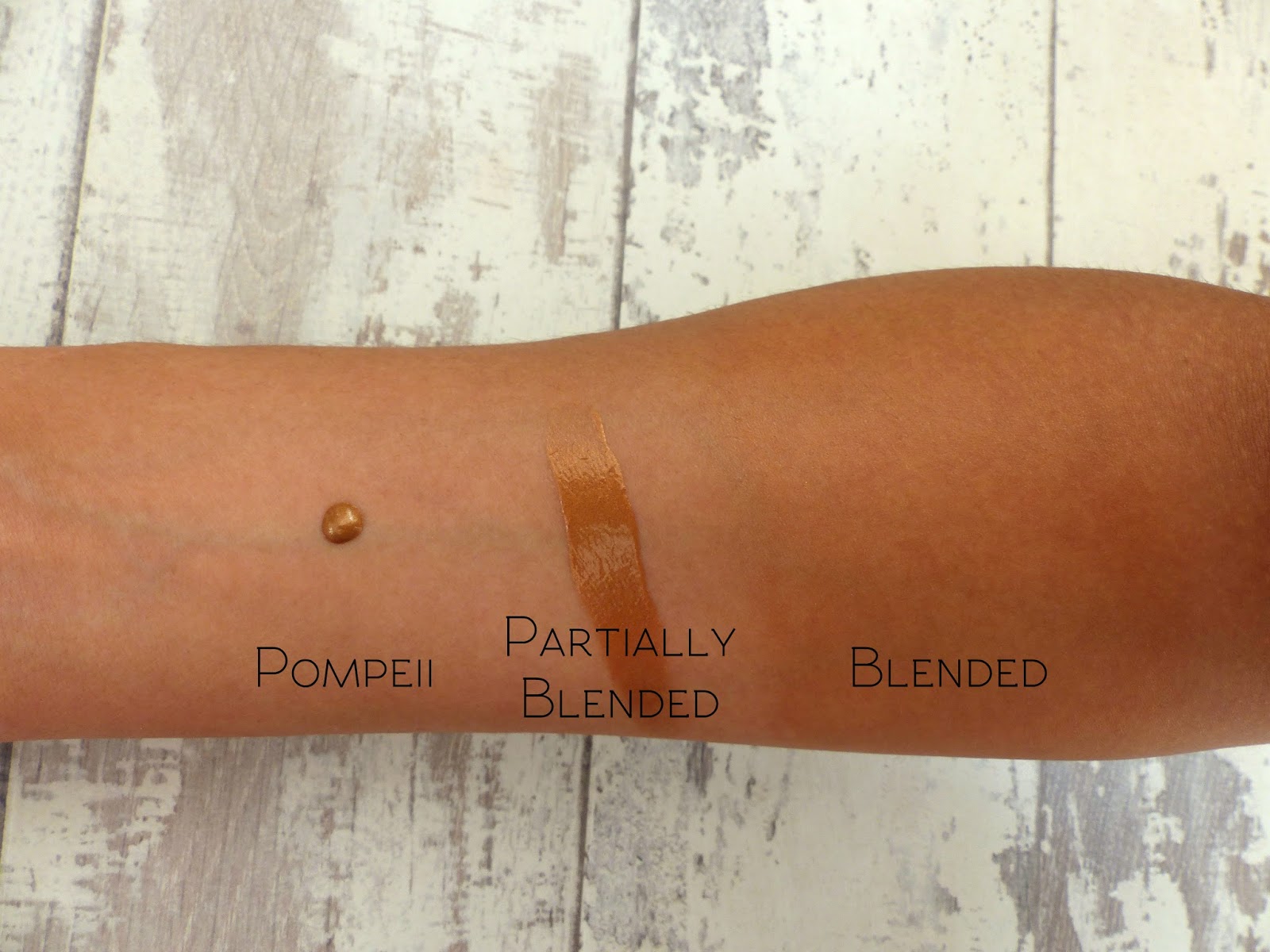 Sleek is the latest brand to jump onboard the strobing train with their new Barekissed Illuminators. There are 4 shades and I went for Pompeii, a deep golden-bronze colour, as I don't really like to wear an illuminator that's too white or too coloured. Pompeii works well for me as mixed into foundation it adds a really natural bronze sheen. The one thing I would say is that it's hard to control how much comes out in a pump, though I find 1 to be the ideal amount. I still need to try this on top of foundation and as a primer, but so far so good. 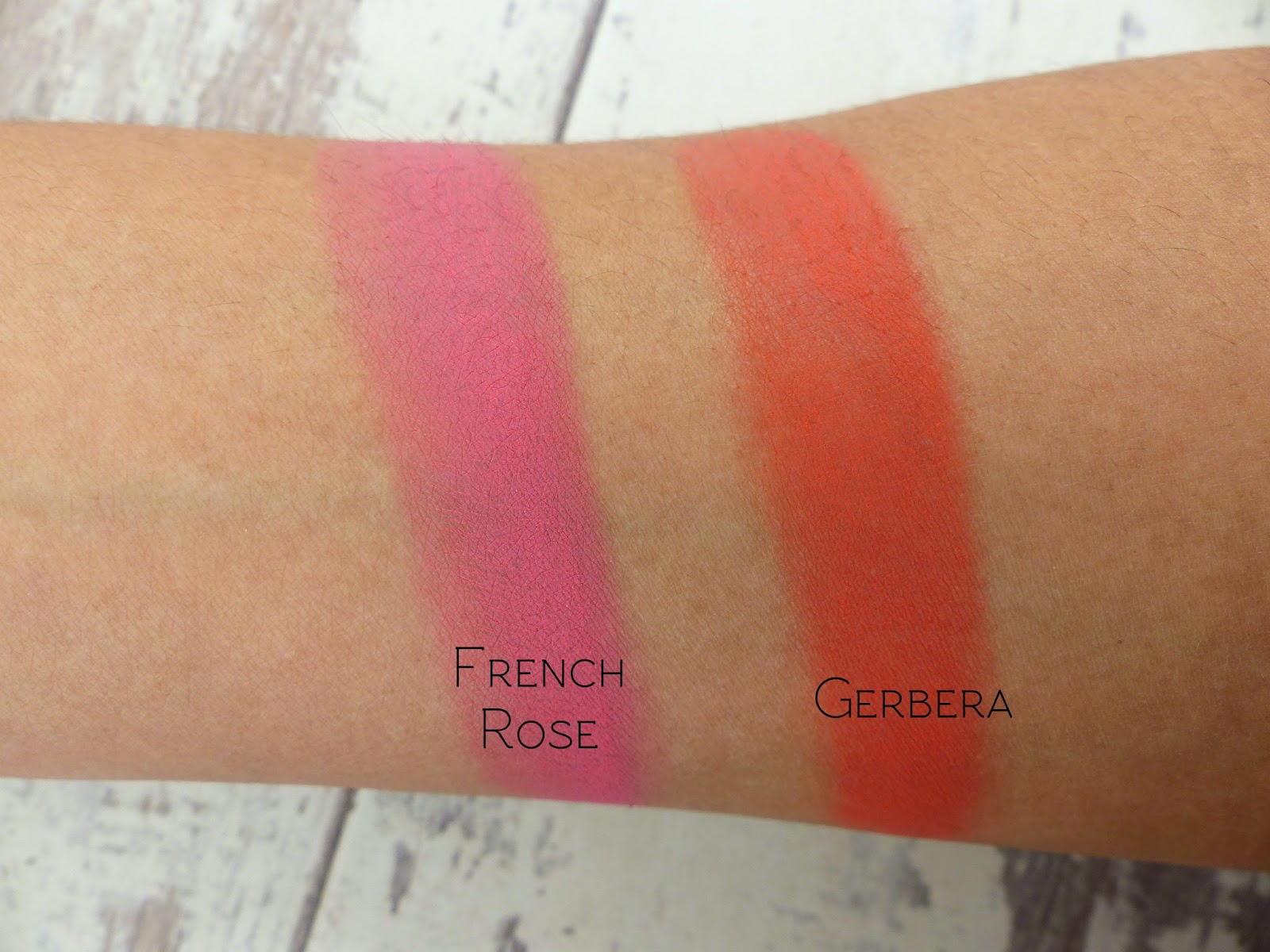 I picked these up a couple of months back when they were first release so I've given them a good go. Having said that I'm still not 100% decided on these. I think I like them... They're a true cream-to-powder formula and are very pigmented and dry fairly matte. They aren't the easiest to work with as there's not a huge amount of 'slip' and also the pigmentation is intense so you have to start by patting on a tiny amount before gradually building it up so you don't look like a clown. However once they are applied I think they look really nice and they last longer without going patchy than your typical cream blusher. I chose the shades French Rose (a pink-rose) and Gerbera (a bright orange), and the quality is consistent with both of them. All the shades are bright with a completely matte finish and French Rose is the most natural in colour. 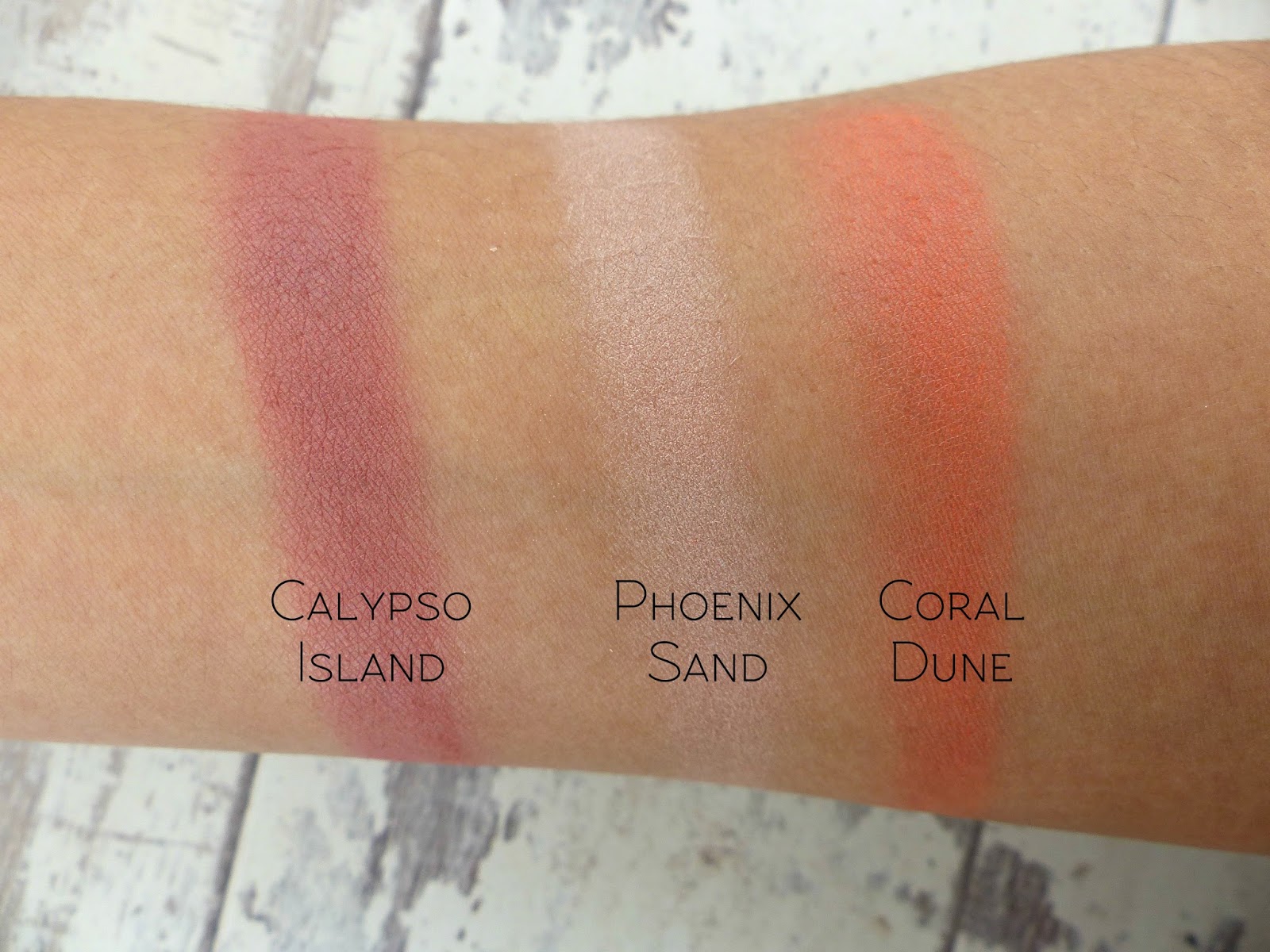 This is part of the Limited Edition Set Sail Collection, so get it while you can. I'm a big fan of the Blush By 3 palettes so I decided to get my hands on Santa Marina. Calypso Island is a lovely medium-berry matte colour and probably my favourite of the bunch. Whilst they are all billed as blushes, the centre shade (Phoenix Sand) is a highlighter as far as I'm concerned as even for the fairest skin there isn't enough of a colour in it to be a blusher. It works nicely enough as a natural, glitter-free highlight with the tiniest sheen to it. Finally Coral Dune is a neon orange matte shade. Overall the quality of this palette is really nice. They're pigmented but not as intense as some of Sleek's other offerings so they're a little easier to work with if you want a natural look. They apply nice and evenly as well as lasting fairly well during the day. If the colours are up your street then definitely get this before it's discontinued.

This is another Limited Edition Set Sail offering. As nice as Sleek lipsticks are overall, the matte shades often suffer from being very drying, so bringing out semi-matte shades was a good call. This is much creamier, easy to work with and flattering on the lips. The shade is a bright pinky-red that can be applied lightly with your finger for a natural stain or straight from the bullet for full intensity. 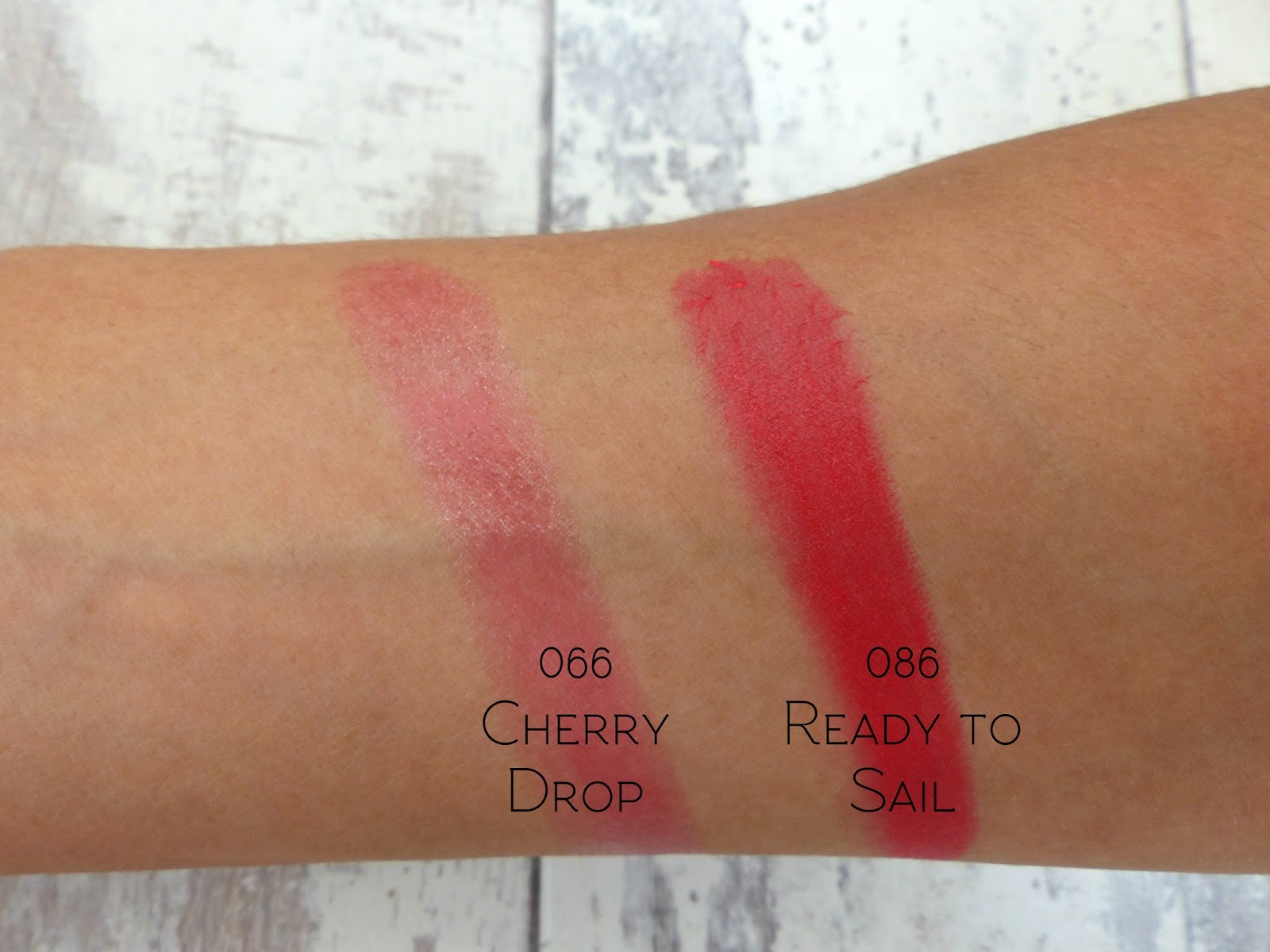 Another new release from Sleek (they're really on a role at the moment!) I picked up the shade Cherry Drop which is a pinky-red colour. The level of pigmentation is nice; it gives an even, natural wash of colour. However I don't think this is particularly special enough to be £1.50 more expensive than their lipsticks and it does feel a tad greasy on the lips. 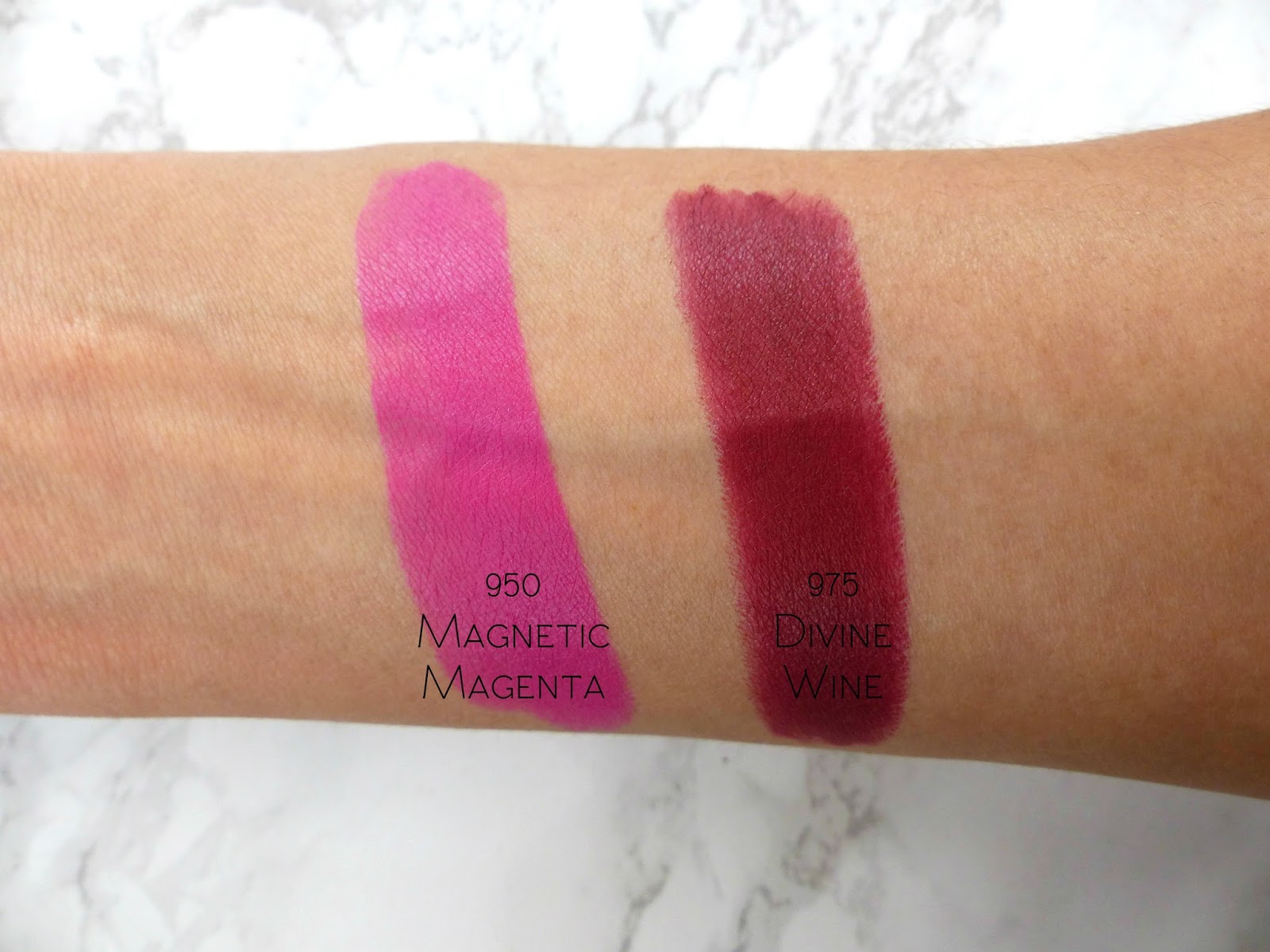 These are not yet available online but they are in stores. This was the biggest disappointment to me as I got all excited after seeing all the US beauty girls rave about these, only to discover that just 6 shades will be available nationwide here. The much-hyped shades I knew I'd love (Touch of Spice and Lust for Blush) were unfortunately not amongst them. I reluctantly decided I still wanted to try the formula so picked up Magnetic Magenta and Divine Wine. Don't get me wrong; the formula is beautiful and ticks all the boxes for me. They may even be the best matte formula on the high street as they glide on but are still long-lasting. However it's really annoying how so many of Maybelline's products come in a poor shade selection for the UK market. Here's to hoping this is a trial and the full range is on the way! Magnetic Magenta, I picked up just as my free item as it's not something I'd normally go for. It's a bright pink-purple (sort of orchid-magenta). Divine Wine is actually a really nice shade, it's just similar to products I already own; it's one of those deep wine 'MAC Diva'-type colours. 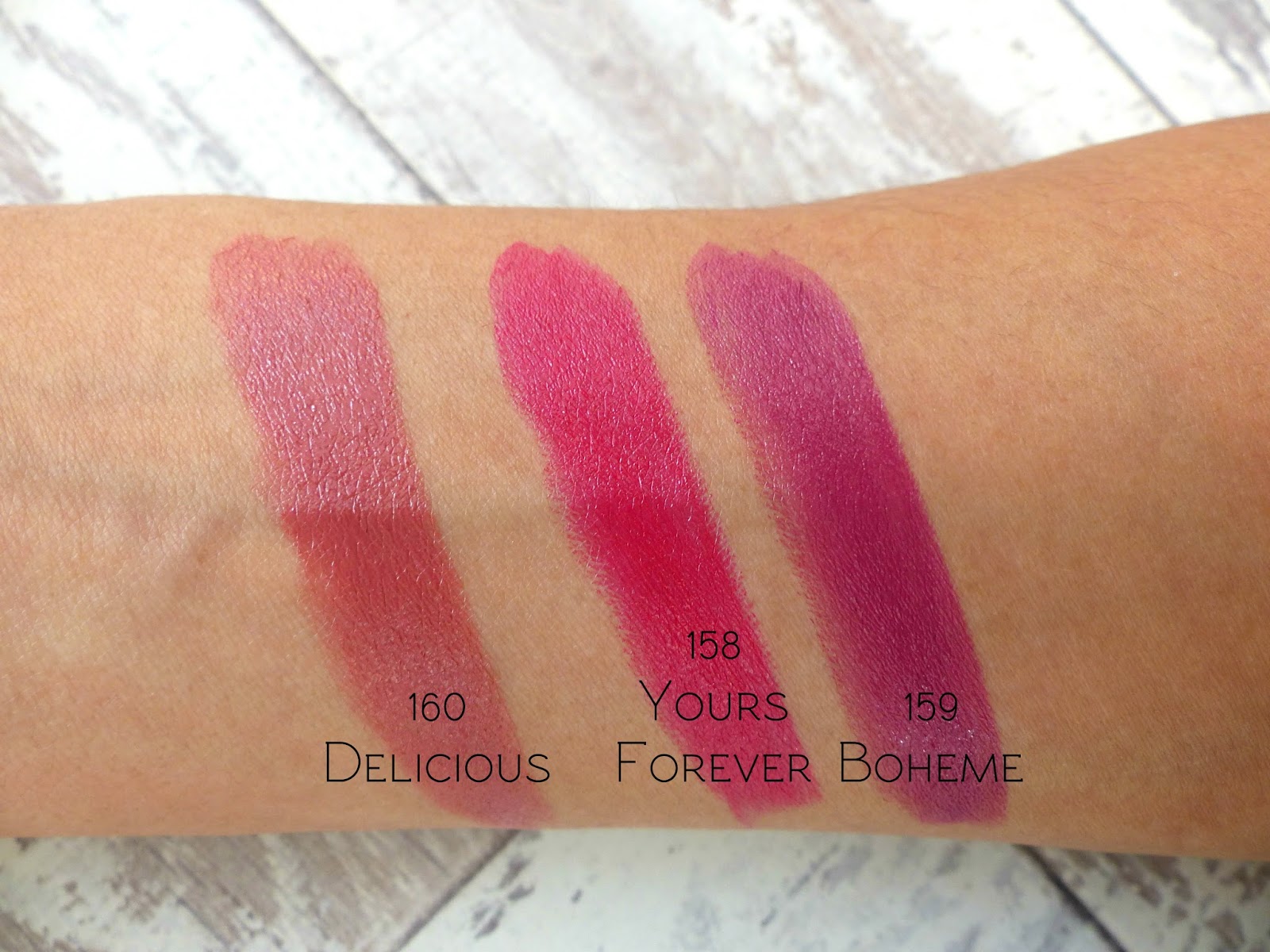 On the other end of the shade selection scale are these lipsticks from Gosh, which come in a dizzying amount of colours. As my first ever Gosh purchases I picked 160 Delicious, 158 Yours Forever and 159 Boheme. I really like the formula of these; they're quite sheeny but also have good colour payoff. Delicious is naturally my favourite as a pink-nude everyday shade, Forever Yours is a vivid hot pink colour and Boheme is a purple colour. I haven't given the two deeper colours a proper go yet (I'm building up to it!) but I really like Delicious so I'm sure they'll be of similar quality. 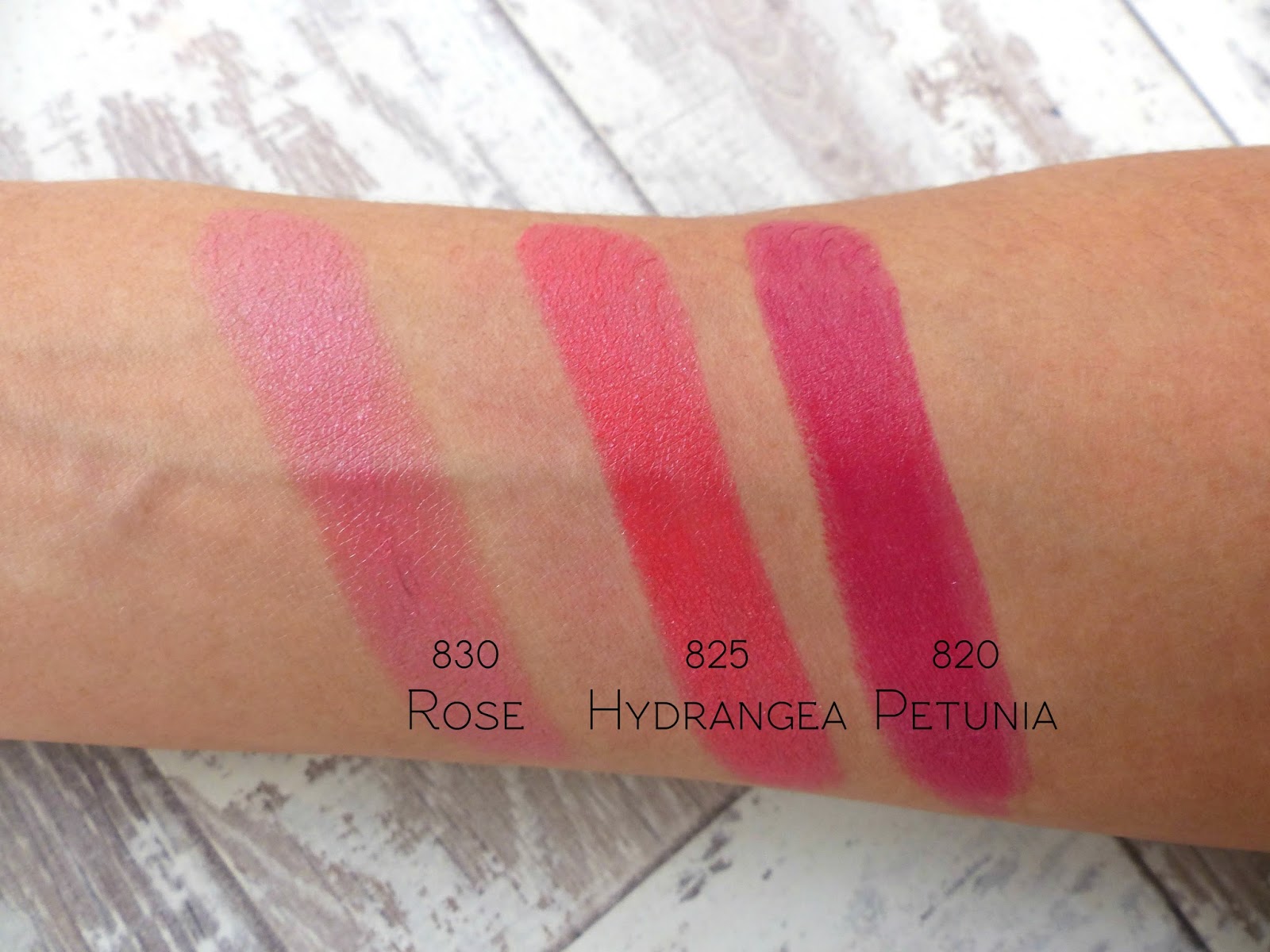 Ok, so I did pick these up ages ago but I hadn't blogged about them so thought I'd talk about them here. These lipsticks have a sweet fragrance and a unique formula that's super-moisturising and somehow pigmented but sheeny at the same time. I appreciate their trying to do something different as I've never really tried anything like this before, however I don't think it fully works. What I didn't realise at the time of purchase was that a lot of the shades contain shimmer, which is a big fat 'no' for me in lipsticks (sometimes it works in very sheer colours, but not huge bits of glitter like in these). Rose is the only shade I like from the bunch and I do like it a lot; it's a nice pink-nude and looks great with a tan. Hydrangea is a vivid coral and Petunia is a bright pink-purple. I find the combination of a glossy finish and a bright colour a bit too much and quite impractical in all honesty so I would only recommend Rose from the three I tried.

Which new products from the drugstore have you picked up lately? What did you think of them?

P.S. Enter here to win a high-end palette of your choice!

And if you enjoy reading my blog, please take a moment to nominate me for Best in Beauty at the Cosmo Blog Awards here
Share:
Labels: affordable, barry m, nails, new in beauty, sleek