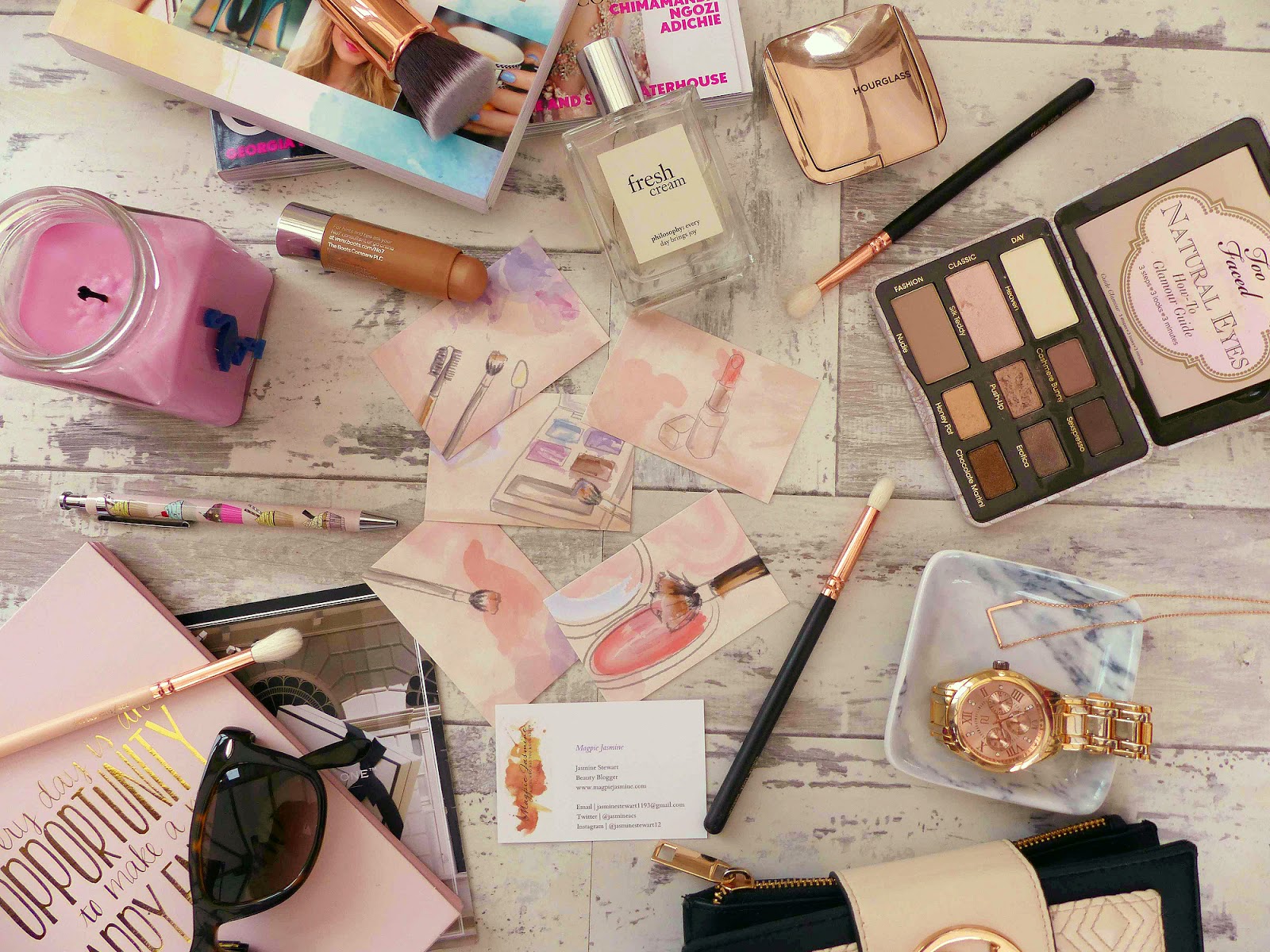 I've decided to make my little catchup post a regular thing, so now expect to see this Sunday post once a month where I'll chat to you about what's going on in my life, where I've been, what I've been watching...anything more lifestyle-based!

I'm going to start by telling you a little about my recent blog changes, which I'm sure regular readers have already noticed! Firstly I had a little bit of a layout upgrade, as well as updating my header, both of which I got on Etsy. I also purchased and managed to install a vanity URL, which I'm really pleased about. On top of this I got myself some business cards from Moo.com (closer look here), which I'm very happy with. They cost me around £13 for 50 which I think isn't bad at all for such quality. The images were pre-made, then I used the graphic panel on the other side for my logo. I know some people find these pretentious or whatever, but personally I think they're so useful at events, to easily swap details with other bloggers you meet as well as to give to brands or PR companies at the end so they can stay in touch and remember you.

I've been down to St. Albans to see my boyfriend a couple of times over the past month, which had to mean a few trips to London! I dragged him all around Liberty, Topshop, Diptyque, Pixi, KIKO and a whole host of other shops I can only really visit in the capital. Then when we got back I had to sit through the football in return...Whilst I was down there we went to one of the best spots to eat around the Oxford Street, Regent Street, Carnaby Street area: Charlotte Street. The first time round was a return to Wahaca, which is a really reasonably-priced Mexican Street Food restaurant, which has a really great, light lunch selection. The second time we went to a Japanese restaurant called Nizuni, where we both had really yummy Bento. My Salmon Bento so good and really inexpensive. I would definitely recommend both those places if you're out shopping in central London as it's so much nicer than just heading to Pret or wherever.

We also went to a really good Cypriot restaurant in St. Albans called Bar Mezze. The atmosphere was really friendly and the food very authentic (I think!), they don't have set starters and mains so you just order loads of different bits from their huge menu and share. A bit of a step down but I finally tried Five Guys at the Trafford Centre. I'm a pescetarian so had some misgivings, but it was 2pm on Good Friday and everywhere was packed out. They don't have proper veggie burgers, you just get as many of their fillings as you want and whilst it was nice enough, it wasn't very good value. The fries on the other hand, did all of the things for me! A bit of a surprise hit for me was Cote's Sunday menu; the chain of French brasseries does a super-cheap special menu. I really wasn't expecting much from it but the food was fantastic and there was so much choice for me (which I'm really not used to!) Finally, if you happen to be in the Tameside/East Manchester area, make sure you check out the Blue Sapphire Thai restaurant in Denton. If you love Thai food like me, you'll be in your element and you also bring your own drink, which always leads to fun...

I alway have something I'm watching on Netflix or Amazon with my boyfriend and this month was no exception. At the start of the month we finished House of Cards, which was really great. All the things that were bubbling under the surface throughout the season explode at the end and there's a pretty big cliffhanger we'll need to wait a year to see the outcome of... After finishing House of Cards, we started Outlander on a bit of a whim, which is about a World War 2 nurse who is transported back in time to 18th Century Scotland (bare with me...) I've ended up enjoying this show so much! The pace is quite slow but in an agreeable way, it effortlessly moves between so many different genres, it's well-acted and the beautiful production values as well as the story keep you hooked. I have been watching Poldark too, whist not quite as captivating it does hit the period drama spot! I've also been watching The Mafia with Trevor McDonald, which is well worth catching on ITV Player even if it makes for jaw-dropping viewing. I also love myself a bit of Louis Theroux, so I'm really pleased he's back with some new documentaries. Whilst they're not quite as 'fun' as some of his older stuff (which I believe is all on Netflix, if you're interested), it's really riveting viewing and shines a light on areas society hasn't really dared to discuss before. As you can probably tell, this month has been all about TV (is it just me or is there nothing good on at the cinema?) but me and my boyfriend caught the Imitation Game on Blinkbox. Based on the life of Alan Turing (who cracked the German Enigma Code in WW2), it's a brilliant film but absolutely heartbreaking (I won't spoil it for people who don't know his story).

Do you have business cards for your blog? What have you been enjoying on TV lately?