I thought I'd do a round-up of the products that have disappointed me as of late. That's not to say you won't like them, but I'll tell you why they didn't work for me. It's also not to say I completely regret buying them; they just didn't turn out as I'd hoped. So, let's get started... 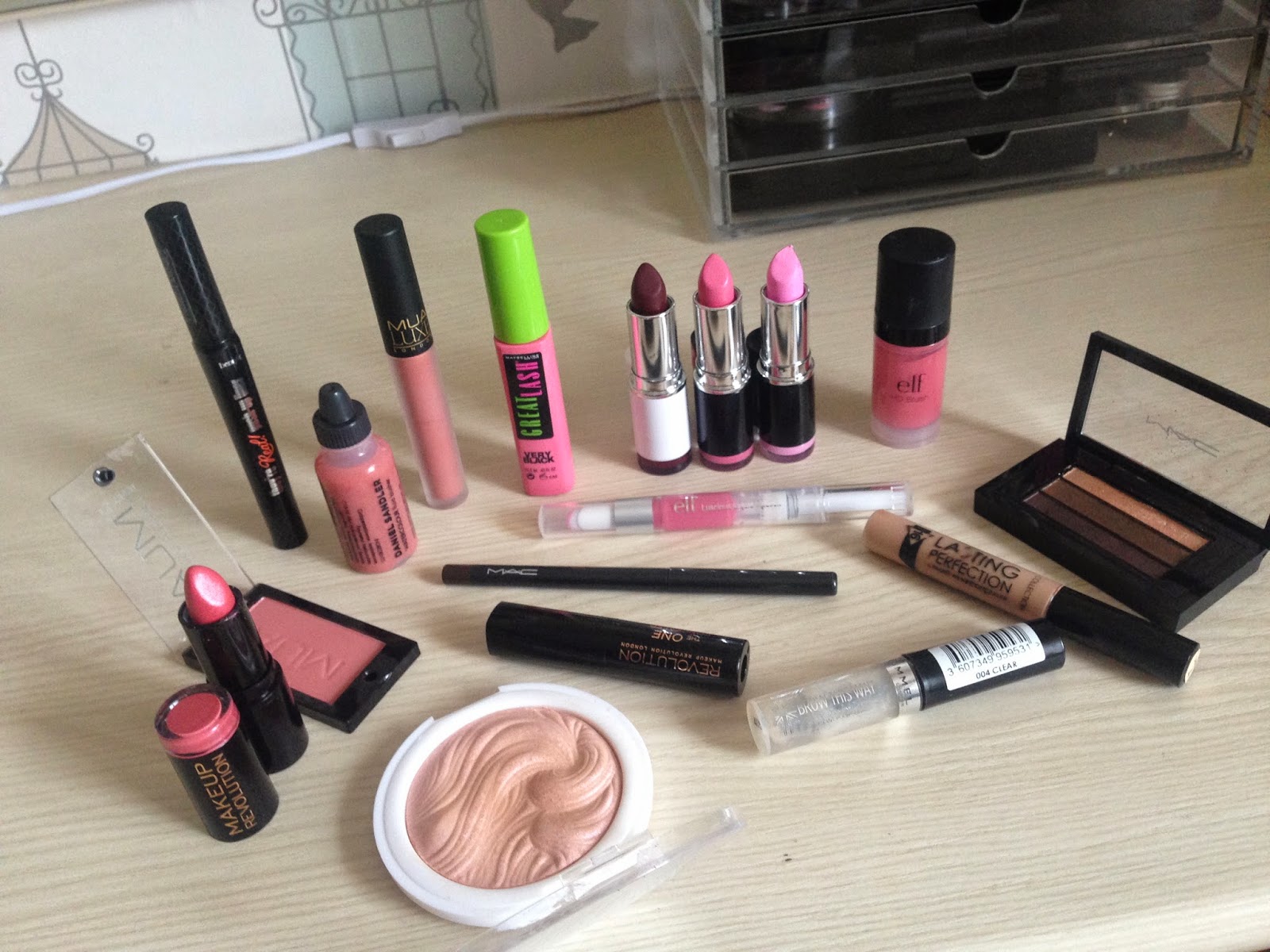 First off is the MUA Undress Your Skin Highlighter (£3). It looks so pretty in the pan but even with the lightest hand it left me looking like a disco ball!

I've only had one £1 lipstick from Makeup Revolution, and it was this one: Mystify. I just didn't like it at all; it was a bright pink with large iridescent pieces of glitter in it. The formula isn't bad, but I've learned my lesson about choosing lip colours online! Obviously it didn't exactly break the bank, it's just clutter I don't really need.

Next up is the MUA Blusher in Bon Bon (£1). I think this was a disappointment because the colour is so pretty! I just could not get it to apply evenly.

I'm still pretty ambivalent about the Benefit They're Real Push-Up Liner (£18.50). I like the look you can get out of it but I find it hard to use and get the finish I want. I'm really not sure if I'll re-purchase it...

I'm really surprised at the hype surrounding this product. I've only used the Daniel Sandler Watercolour Blush in Spicy (£14.50) once, so I'll give it more of a chance, but I'm just not impressed at all. The bottle is tiny for the price, it didn't last all day and it just made my face look really greasy!

I really like this in Tranquility (review here), but before I got my hands on that, I first tried the MUA Luxe Lip Lacquer in Halcyon (£3). I cannot express how unflattering this orange-brick red shade was on me.

I'm at a loss as to how the Maybelline Great Lash Mascara (£4.99) has been around so long! I didn't like it and no one I've spoken to about it did. It just made my lashes look cake-y and stubby.

Next we have 3 of MUAs £1 lipsticks. First is Wild Berry, from the matte range, which was disappointing because it comes out nowhere near the shade it looks in the bullet. If you're looking for a sheer stain-effect then this is good for that, if you want a deep matte berry then look elsewhere.
Again with Tulip and Flamingo, it's not that they're bad quality, the colours just weren't for me. I wasn't expecting quite such Barbie pinks!

The e.l.f. Studio HD Blush in Superstar (£4.50) was a real disappointment, as I'd heard good things about this line. There are no toned-down colours in the line, they're all very bright, but more importantly this really separates out even after a good shake. If you're looking for bargain liquid blusher, try the Makeup Revolution Vivid Blush Lacquers instead.

The MAC Pearlescent Eyeshadow Trio in Collective Chic (only available in £35 bundle, review here) was such a disappointment as the colours were so lovely but they didn't look good as soon as an hour after application.

I thought Collection Lasting Perfection Concealer (£4.19) would finally stop me having to pay £15+ for a concealer, but it wasn't to be. This did not hold at all under my eyes (plus it looked cake-y) and the shade selection is really poor, so the closest one to my skin tone still was quite pale and neutral-based.

I wasn't impressed with the Rimmel Brow This Way Styling Gel in Clear (£3.99) because it just didn't give me the same natural hold as my e.l.f. one (which also costs less than half the price!)

I really didn't like the e.l.f. Luscious Liquid Lipstick in Perfect Pink (£1.95). It was basically a lipgloss with barely a hint of colour.

Another item from the MAC Look in a Box: All About Coral (£35) was the Technakohl Eyeliner in Brownborder. It just wasn't very pigmented. I'd never buy this individually.

Finally, another failed foray into drugstore concealers; the Makeup Revolution the One Concealer (£3). The colour selection isn't good but I actually did find a match. My main gripe was that it just didn't conceal! Plus it made under my eyes very oily. If you want light coverage and have dehydrated eyes, you may like this though.

Whether you agree or disagree with my picks, don't forget to comment! :)