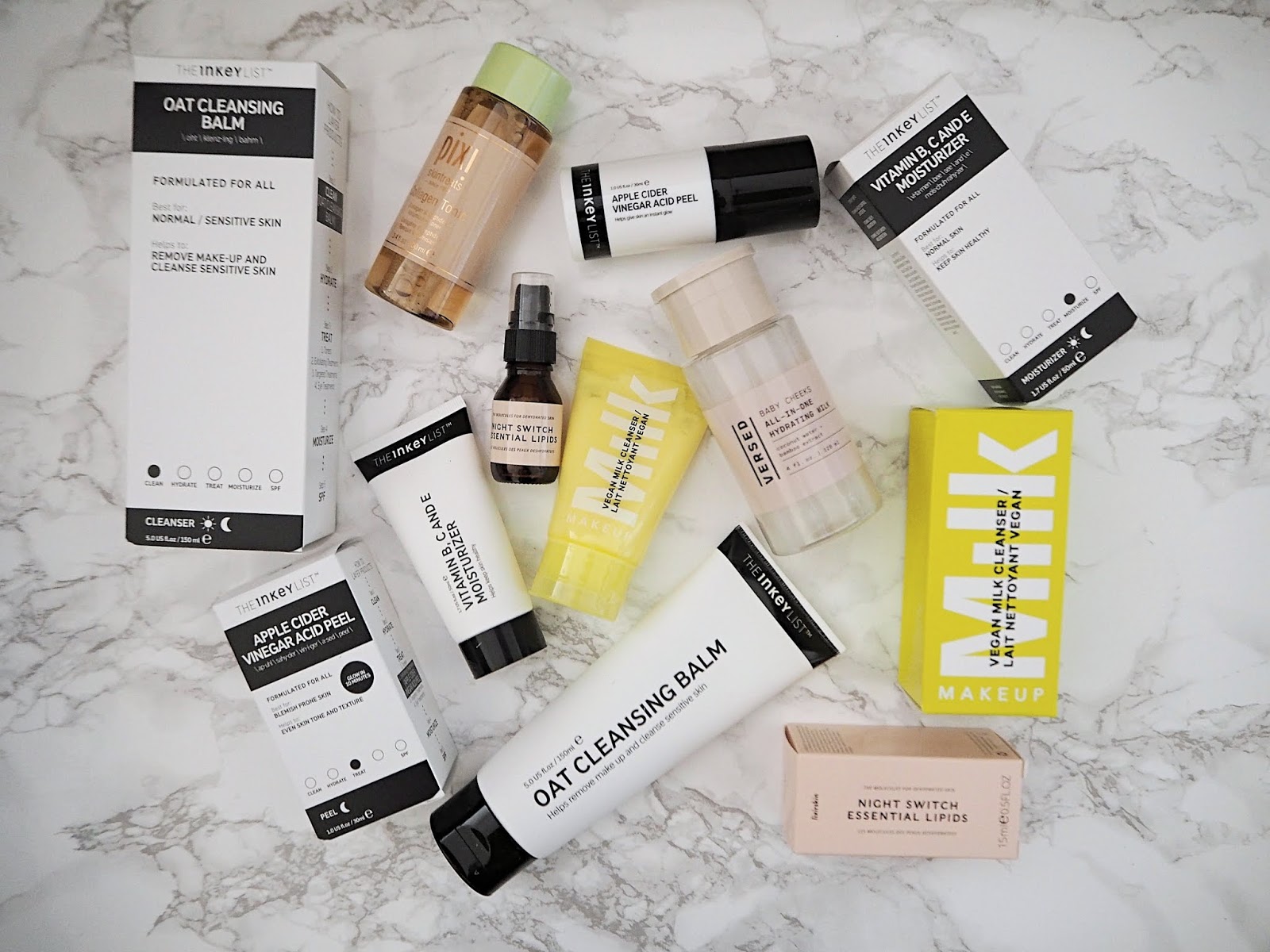 - Advertisement information: this post discusses items gifted to me with no obligation to share them (marked *). In addition I have / have had a brand relationship with The Inkey List, Cult Beauty, Mik Makeup and Pixi Beauty (gifting). My blog has Skimlinks and RewardStyle installed to automatically monetise purchases of products I link on my blog, therefore this post may contain affiliate links. All opinions remain my own and please refer to my Disclosure Page  for further detail -

A few of my favourite brands dropped skincare launches over the past few weeks that caught my eye, so I'm reviewing them for you today!


Cleanser seems a logical place to start? I love love love the Milk Makeup Vegan Milk Moisturiser | £35 (review) so I was really excited to see the launch of a Milk Makeup Vegan Milk Moisturising Cleanser | £27. My excitement was slightly dampened when I saw it was billed as a 'foaming' cleanser, so I erred on the side of caution and got the travel size for £14, so I wouldn't be stuck using it for months if it wasn't a formula I could get on with. This is actually such a generous 'mini'! And I'm happy to say, I do actually like the formula - it lathers up, for sure, but you'd have to use a lot of product to get any bubbles. The ingredient list is very similar to the moisturiser; fairly long but largely inoffensive! There's sodium hyaluronate and glycerin to deliver water to the skin, nourishing shea butter, jojoba oil and sunflower oil and antioxidants such as watermelon extract, aloe and oat. The only potentially problematic thing for me personally is the rosemary extract, as this is fragrant oil and can cause some people problems. Overall, though, it's a pretty clean formula, it doesn't strip my skin and leaves things nice and soft. I tend to use this in the morning because for me personally, I quite like a lathering cleanser first thing to get rid of any sweat or dirt or anything else lingering in my skin, so it feels nice and clean and ready for the day. I liked this a lot more than I expected!

I also got the Inkey List Oat Cleanser | £9.99. Ok, up top I'm going to just say I find it incredible that this product made it to market in this packaging - did no one, like, test it, or...? It's absolutely ridiculous how hard I have to squeeze to get some product out of this tube. It does get a little better as you get further into the product, but I'm still not a fan! Additionally, the packaging is slightly porous, so I expect it to get pretty mucky. That aside; there is good stuff in that entirely inappropriate packaging. It's a true balm cleanser that melts onto the skin (though I would note it has a slightly grainy texture) and warms down into an oil. I wouldn't say it totally emulsifies on contact with water but it can be fully removed without any filmy excess left behind. For that reason, however, I'd say it's more suitable for dry skin because the oils are more likely to be absorbed into the skin in a non-emulsifying formula. The ingredients list is refreshingly simple; it contains sunflower oil two different oat derivatives and sweet almond oil as its main components. These are all nice, emollient moisturisers that I don't foresee causing issues for sensitive skin. If you're more on the dry side; this is a nice morning cleanser, though I do think it can still work for other skin types as a makeup remover. All those lovely oils means its great at effectively and easily removing makeup, including black liner and mascara. I would pick it up again if they changed this to pot packaging.

Next, let's talk about the Versed Baby Cheeks All-in-One Hydrating Milk | £16.50. It reminds me a lot of the Pixi Milky Tonic, however it's fragrance-free, which feels like a rarity for a more hydrating toner, with the main components being coconut water, bamboo, glycerin and algae extract. Algae is a great antioxidant to protect the skin against environmental damage and can be a source of peptides and amino acids for anti-ageing. Bamboo has skin-soothing properties and glycerin attracts water. Coconut water is rich in fatty acids to moisturise and replenish the skin. This makes it a great cocktail for dry and / or dehydrated skin types. This can be used as a cleanser or a toner, but I personally exclusively use it as a toner, though it does pick up any lingering makeup around my hairline or on my neck. I like the packaging, which makes it quick and easy to use. This provides moisture without leaving my skin sticky or tacky. My skin also feels seriously soft after use!

Whilst I've been using the Versed product in the morning, I've been going for the Pixi Collagen Tonic | £18 | in the evening. Again, I have a few toners so thought I'd try a smaller size to begin with (which is £10). This toner is primarily made up of acacia collagen, coconut water and peptides, but I do have to warn you that there are some fragrant essential oils in the mix. Acacia collagen is plant-based alternative to animal collagen, which many brands are now trying to phase out, however it's a trademarked ingredient so it's hard to find independent studies on its efficacy. I'm just going to talk about it based on my personal experience! There isn't much evidence that applying collagen topically encourages collagen production in the skin, however it is a good moisturising agent, as is the coconut water in this formula. Peptides aren't ingredients with lots of research backing their anti-ageing claims, however I've found they give me amazing results and my skin looks renewed after use. Overall, I'm enjoying using this toner, but currently all it's given me is moisture and softer skin, which is nice but I guess I was expecting more from collagen and peptides. However with the more affordable price-point, perhaps the concentration just isn't that high.

I wasn't really sure which way the Inkey List's Vitamin B, C and E Moisturiser | £4.99 | would go, but I thought I'd try it given the price-point and potential promise. I have mixed feelings on this moisturiser, to tell you the truth. It has a light texture that's probably going to be most suitable for normal to oily skin types but not nourishing enough if you're dry. I find it has a bit of a hard time absorbing into my skin and can also pill up a little by the time I've applied sunscreen and my makeup primer. That being said, it does leave my skin feeling softer and healthier. It's formulated with a number of vitamins: B (panthenol - a skin-healer, and niacinamide - to help calm and protect the skin), C (sodium ascorbyl phosphate - for brightening) and E (tocopheryl acetate - to moisturise, protect and repair the skin). It also contains sodium hyaluronate, to attract water, and sunflower seed oil, as a moisturiser. It does contain coconut oil too, which I'm not wild about because it's a known comedogenic, so although I'm not personally sensitive to it, it does break a lot of people out. It's nice as a moisturiser but in the past few weeks of using it, I really haven't noticed any amazing results from the active ingredients included in the formulation. All-in-all it's probably one I'll use up but I won't repurchase.

I've been trying out the Lixir Skin Night Switch Essential Lipids | £24 | for the past few weeks and I have to say I'm impressed. In fact, my only negative is that it doesn't come in a bigger bottle... This oil is mixture of replenishing lipids to restore and deeply moisturise the skin. Ceramides help protect the skin but naturally deplete over time in our skin. Glycerides, phytosterols and phospholipids will help keep the skin smooth and supple too. Overall, this booster product (I use it overnight after moisturising) is a must-have for dry skin, even as we head out of winter. It just brings dull, tired skin back to life so it's softer, fuller and healthier. I will probably stop using it over the summer months but as soon as the colder weather circles back around; this is going to once again form an essential part of my routine.

Finally, there's a treatment I've been using a couple of times a week: the Inkey List Apple Cider Vinegar Peel | £14.99. I actually thought this was an overnight treatment before realising it was a wash-off mask - my bad! Apple cider vinegar is one of those ingredients that's gained a bit of a bad rap due to those DIY Instagram videos in which someone will point to a spot, shake their finger at the camera and proceed to douse their face in the stuff. Ouch. I personally don't recommend getting apple cider vinegar out of your cupboard and trying to DIY a skin treatment from it because it could be really harsh on the skin, even when watered down. Something like this peel is formulated for the skin and you can still get the antiseptic benefits to help with breakouts. This formula contains 2% apple cider vinegar alongside 10% glycolic acid (an AHA chemical exfoliant with proven science behind it). There are also some funkier ingredients in the mix and I'm not sure what to make of them! There's orange and lemon fruit extract in there, which I don't think have any proven skin benefits and can actually be a little sensitising, even when formulated for the skin. There's also sugar maple extract, which I've never even seen in a skincare product, so I headed over to Paula's Choice who classify it as an 'average' chemical exfoliator. I have mixed feelings on the ingredients, but I have personally been enjoying the results I've seen with this product. You can definitely 'feel' it working with that 10% glycolic acid, so it's absolutely not one for beginners (and don't forget to use sunscreen afterwards) or something I can use more than once or twice a week, but it has really helped with some hormonal breakouts I've had recently and gives me that super-smooth, clear, 'brand new skin' look. I don't think it's one for sensitive skin but if you're ok with the ingredient list and have skin that's quite hardy and used to acids; it did give me good results.

Have you tried any of these products or brands?