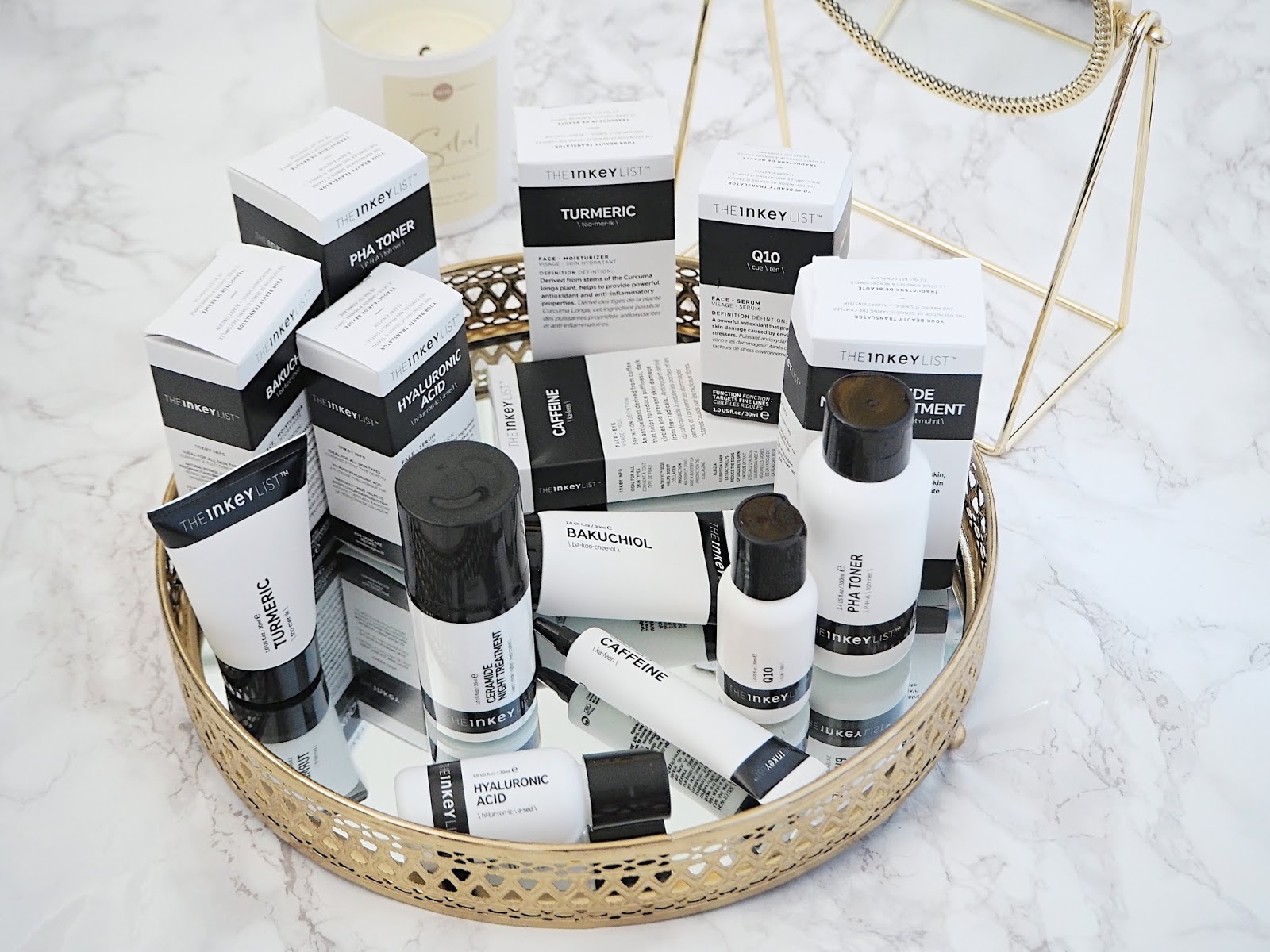 - Advertisement information: this post does not discuss gifted items however I have / have had a brand relationship with  the Inkey List and Cult Beauty (gifting). My blog has Skimlinks and RewardStyle installed to automatically monetise purchases of products I link on my blog, therefore my content may contain affiliate links. All opinions remain my own and please refer to my Disclosure Page  for further detail -

The Inkey List launched last year with a focus on active ingredients at a low price-point, which obviously drew comparisons to a certain Deciem brand... I was actually gifted some of their prototypes to try and really liked both products - they did say they'd send the final versions when they launched but that never materialised and I didn't get a load of people asking for my thoughts, so I decided to put my brand review on hold. When they first launched, a lot of their product line was very similar to the Ordinary's and a touch more expensive, so maybe that's why there wasn't as much buzz as I'd initially expected there to be around this brand. However, they've since expanded a lot and moved into ingredients that I really haven't seen other brands at this price-point, incorporating many formulations that really intrigued me. So it seemed time to finally do that review! I decided to pick up a mix of ingredients I've tried before and some that are new to me. Over the past few months I've been testing out their products and today it's time to return my verdict...


Let's kick things off with the PHA Toner | £9.99. PHAs (Polyhydroxy Acids) are a very underrated form of acid exfoliation. Like their more famous cousins (namely AHAs and BHAs), they'll chemically remove dead skin cells, however they're much gentler. They have a large molecule size so provide surface-level exfoliation and are suitable for sensitive skin. This is a great ingredient to provide everyday exfoliation, though it obviously isn't oil-soluble, so if you have blemish-prone skin it might not be the best option for you. It's also a great introductory ingredient if you haven't used acid exfoliants before. I found this really helped to smooth my skin and made it softer and more radiant, with zero irritation (though my skin is very used to chemical exfoliation at this point). It doesn't leave a tacky excess either. My only negative is that the bottle is relatively small. Having said that, I've used this most days for the past two months and it's still going, so we'll see...

I tried two serums from this brand, the first of which was the Hyaluronic Acid Serum | £5.99. This is probably one of the best products of the bunch in my humble opinion! I know people love the Ordinary's HA serum (I did a comparison of them here) but for me, although it technically worked, I hated the sticky excess it left behind on my skin. The Inkey List give me all the benefits of this amazing ingredient with a formula that melts into the skin beautifully without leaving behind any excess or stickiness. It has a great texture that's definitely more in keeping with more expensive products. Hyaluronic acid is amazing at retaining moisture - I use it on damp skin so it draws water into my skin. The packaging of these serums isn't great (you have to flip the cap and squeeze out the product) but this HA gives me healthier, plumper skin for the price of a Pret salad, so I really can't complain!

I also decided to try their Q10 Serum | £4.99 | given I haven't really used this ingredient in my routine before. I actually really liked this one too! This antioxidant naturally occurs in the skin but depletes as we get older. Topical use of Q10 can protect the skin from environmental damage and it has soothing properties. There is some evidence it has anti-aging properties too, though adverts for other brands' Q10 formulas tend to overegg this claim a bit (that aggressive 'reverse aging' marketing is actually the reason I hadn't really considered Q10 for myself before now). This serum has a slightly yellow colour (which is what you're looking for when it comes to Q10) and again; the texture feels far more luxurious than I expected for the price. It absorbs really nicely and has a lovely smoothing, hydrating, plumping effect. I really like this product and it looks like I'm sold on Q10 as an ingredient! It's just a great antioxidant; don't get bogged down in the marketing of it suggesting it's only for mature skin.

Next, let's talk about the Caffeine Serum | £8.99. This is intended for use around the eye area; it has a light gel-like texture, so won't be enough on its own for dry or mature skin, especially as we head into winter. However it's marketed as a serum, not an eye cream in its own right, so I can't really hold that against it. I do find it refreshing and de-puffing, it's just not a product I'm super excited by. Caffeine will act as an antioxidant but the idea that it 'wakes up' the eye area is a bit of a placebo, based on the research.

The moisturiser I decided to try from the range was the Turmeric Cream Moisturiser | £7.99. The star ingredient of this formula is obviously turmeric, which you're probably familiar with from cooking up a curry, however this root is also a really potent antioxidant; reducing inflammation and giving your complexion a healthy glow. This product is also formulated with squalane - a plant-derived oil that's very similar to the natural oils our skin produces. This acts as an emollient to soften the skin. Vitamin E is also in there, which has amazing moisturising properties and is also an antioxidant. However this also does contain coconut oil as its third ingredient. Whilst some people swear by using coconut oil for their every beauty need, it can be highly comedogenic for a lot of people in leave-on products. I haven't personally been broken out by this product and I used it virtually every morning for around 3 weeks, however some people are very sensitive to coconut oil and if you're one of them, please steer clear of this moisturiser! That being said; do I enjoy its effects on my skin personally? Yes, I do. Whilst it's not going to replace any of my all-time-favourite moisturisers, it's affordable and it does the job. I don't find it too greasy or heavy for my normal / combination skin and I find it smooths and moisturises my skin nicely. It does the job for me and the little tube makes it really great for travel. But I can live without it when it runs out (which will probably be soon, as you only get 30ml in this tube, which is standard for a serum but less-than-average for a moisturiser).

The next product I'll talk you through was the biggest disappointment for me! It's the Ceramide Night Treatment | £14.99 | (which is also one of the most expensive products in the line). I have to start this review by saying that I generally love ceramides; these lipid molecules are found in the top layers of the skin and (of course!) deplete with age. They form a protective layer over your skin to prevent water loss and fortify the skin against environmental damage. This treatment also contains a boost of hyaluronic acid to work with the ceramides. What I didn't really 'get' about this product is that it's a sort of gel formula, whereas I'm used to getting my ceramides in really nourishing moisturisers. I was somewhat confused by the instructions too; it looks and applies more like a serum to me, however the brand advises you should cleanse and tone, apply a serum and then just use this. That's nowhere near moisturising enough for my skin at this time of year so I decided it might be worth topping it off with an oil or something, however the water-based formula just pilled up when I tried this. It just doesn't really seem to have a place in my routine and I'm sure I'd find a way to make it work if it was delivering the amazing benefits I usually associate with ceramides, however it's honestly just ok.

Finally, let's talk about the Bakuchiol | £9.99. This was actually my first foray into the ingredient touted as the natural alternative to retinol (Vitamin A, which has proven anti-aging, skin smoothing and anti-acne properties), which has been a staple in my routine for a while now. Some of the drawbacks of retinol are that you can't use it whilst pregnant or on accutane, and whilst I couldn't find much information on the latter, this ingredient is pregnancy-safe for those of you looking to get a retinol-like effect whilst you're expecting or breast-feeding. So far, the research seems to suggest bakuchiol (which is plant-based and therefore vegan, whereas some retinols are animal-derived) has very similar effects to retinol and can promote anti-aging, as well as smoothing the skin's texture and tone. It's also gentler on the skin, though I personally didn't find this product as transformative as retinol. It comes is a nice, moisturising cream and I don't get peeling or irritation with this, in contrast to retinol. It does have a nicely nourishing quality and it does somewhat smooth the skin and give it a healthier look. Overall; I like it, but it isn't as amazingly game-changing as retinol.

Overall, I like the Inkey List a lot. Far more than I expected, in all honesty! Their product range is definitely smaller than that of obvious competitor the Ordinary, however it's a tad easier to navigate and I actually have a higher hit rate of successes vs. failures with the Inkey List. The packaging isn't always the best, but the products are very reasonably-priced, though admittedly a little more than the likes of Good Molecules and the Ordinary. The quality overall has been great; the textures feel a lot more expensive than they are and I haven't really had to deal with sticky, messy or pilling formulas.

I also think they've introduced some really interesting ingredients to the market that still aren't that common at this price-point. Whilst there are the obvious products in there like a hyaluronic acid serum, they also have harder-to-find-cheap options like the bakuchiol and Q10 (along with others that I didn't personally pick up). I definitely think the Inkey List shouldn't be overlooked! I've really enjoyed the products I've tried from them and several have made their way into my everyday routine. They aren't 'good for the price', they're just good!