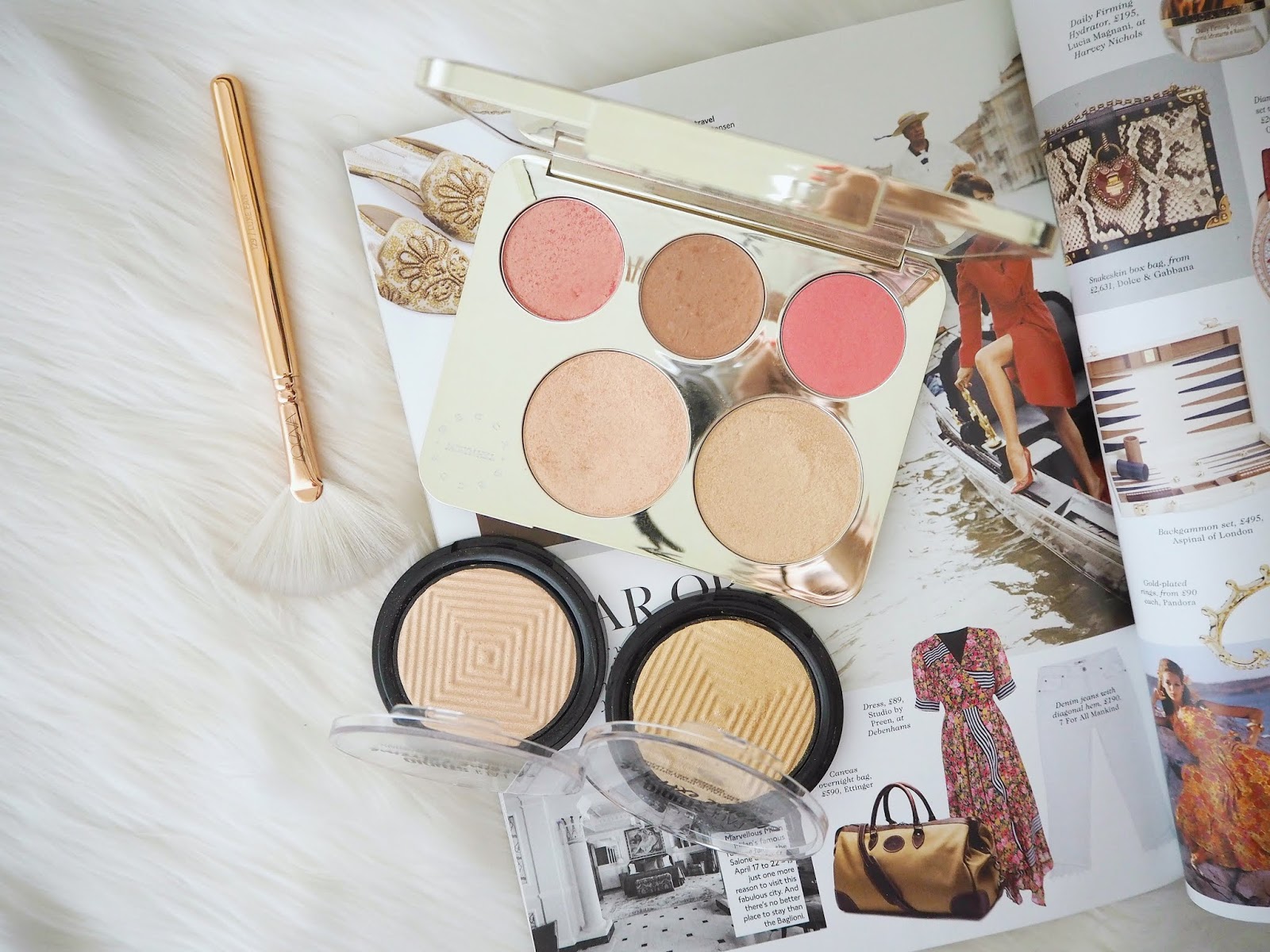 I love finding a good dupe and today I have a winner for you! Maybelline originally released their Master Chrome highlighters in the UK earlier this year - they were nice enough but definitely on the subtle side and they didn't look to have the same formula as in the US. However I was in Boots (to buy hayfever tablets, not makeup...) and spotted the brand new Maybelline Face Studio Chrome Extreme Highlighters | £8.99 each | so decided to pick up the two shades on the display, as there was a 2 for £12 offer. I got them home and thought they reminded me of a certain high-end highlighter, so today I wanted to compare the colours and formulas for you, to give an affordable alternative to the Becca Shimmering Skin Perfectors Pressed | £32 each.

Ok, so there's not much comparison when it comes to packaging - the Becca is sleeker and weightier, plus comes with a mirror (though I won't lie; it's always annoyed me that the mirror is so heavy. You have to angle it a certain way so your highlighter doesn't topple over!) However, although the plastic Maybelline packaging looks cheap (because it is), it closes firmly and seems decently sturdy and travel-proof, which the Becca highlighters often aren't. At the end of the day; you're paying a premium for packaging when it comes to high-end products, so it isn't a surprise that a drugstore brand has scrimped a bit on this to give you a cheap product!

I will caveat this section by saying that the Becca formula is impossible to replicate, in my personal opinion, however I want to investigate just how close an affordable product can come to it. The Becca formula is water-based and so it has this insane smoothness that almost makes you question if it's a powder at all. The colour payoff is incredible and there's not a single fleck of glitter in the formula; it just gives an intense, dewy glow.

The Maybelline formula doesn't quite have that texture or intensity, however it's the most blinding highlighter I've ever come across for this price and it's probably more than enough for most people! It's still very smooth and the colour definitely comes off beautifully.

I'm not sure if it's by design or coincidence but Maybelline's Molten Gold looks an awful lot like Becca's Champagne Pop and Sparkling Citrine is a dead ringer for Prosecco Pop. Despite the formula differences meaning that they swatch slightly differently, I really can't see much of a difference between the colour of Champagne Pop and Molten Gold! The only variance between Prosecco Pop and Sparkling Citrine is that the latter has a slightly more olive / antique gold undertone, which is so on-trend right now. 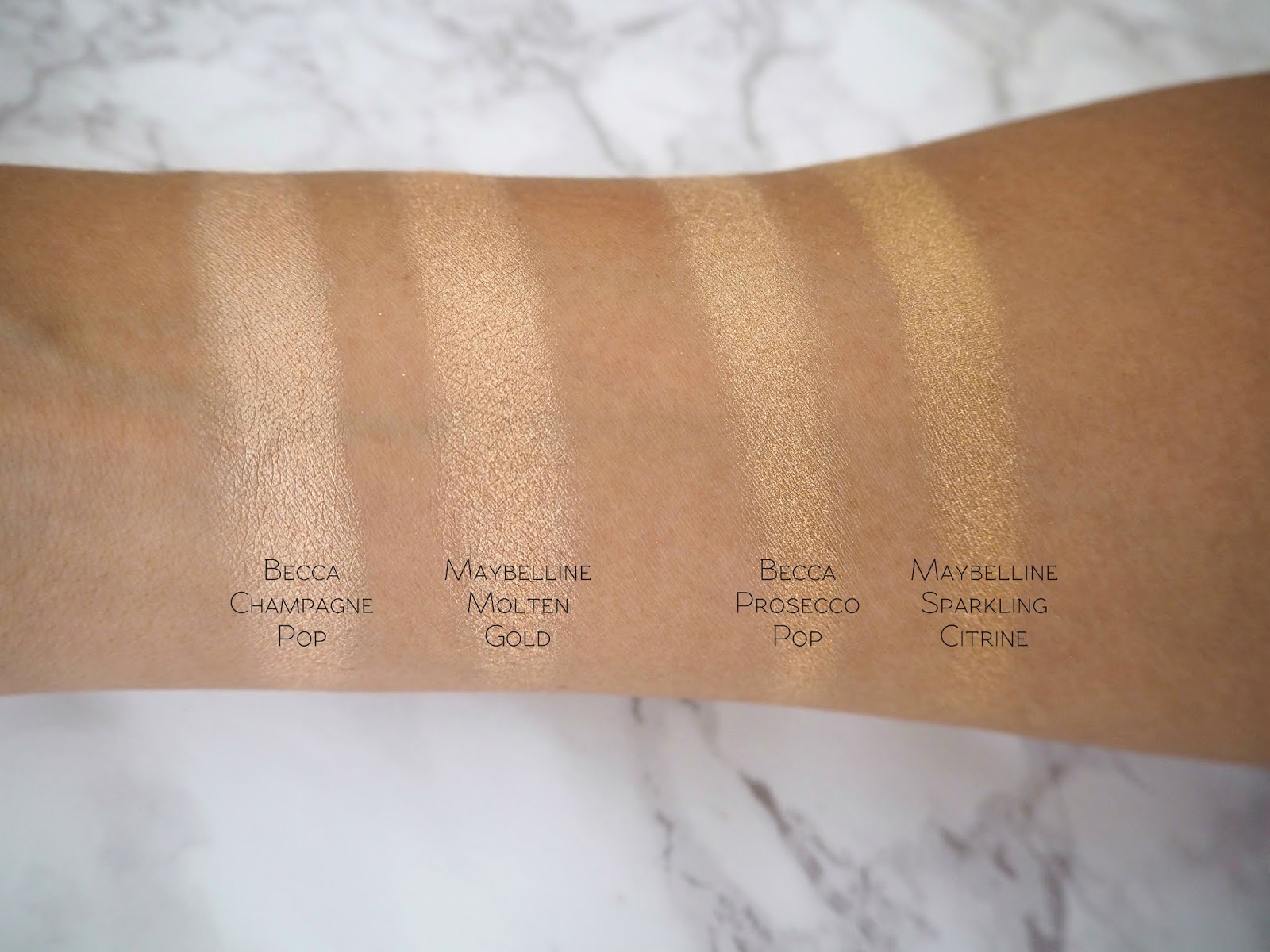 I think the Maybelline products are fantastic for the price-point - if you can splurge on the Becca then I recommend that, but if you can't (or don't think a highlighter can be worth that much money) then I think this is very similar and you're not going to be able to see much of a difference once the product is applied to the skin.

Do you invest in your highlighters or do you prefer to go drugstore?