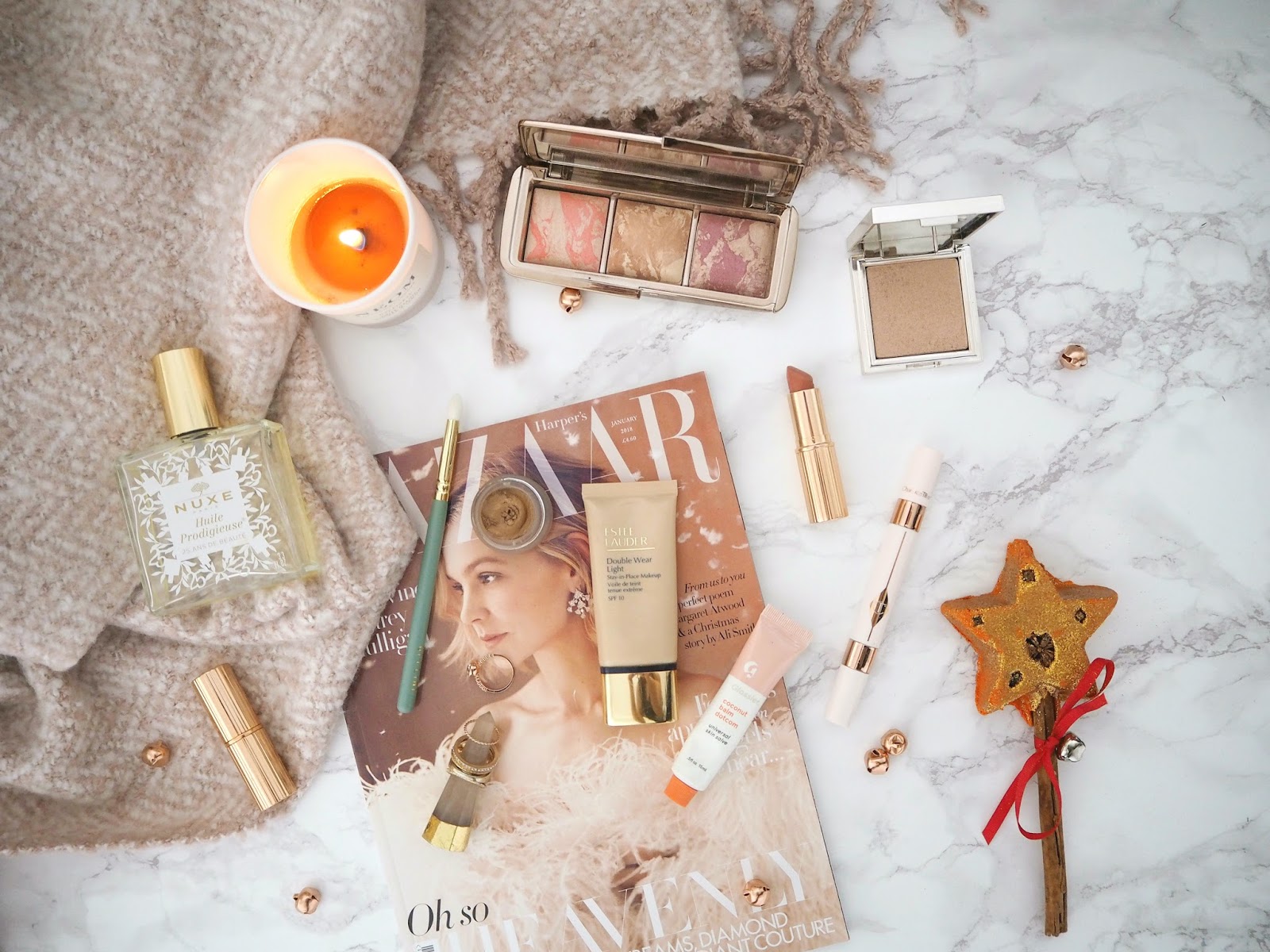 I can't believe we're at the end of another year, as cliche as that sounds. I guess now I'm in my 20's, life does go by that bit faster! Today I'm taking a moment to reflect on 2017, look forward to the year ahead of of me and talk through some of my lifestyle favourites from this year. I hope you enjoy this post and have an amazing New Year's Eve, however you're celebrating!

I know this is vague (there are some things I don't want to share online!) but this year has not ended up being what I thought it would be. I kind of had a vision at the start of 2017 as to where I'd be at the end of it and stuff happened in the meantime that kind of changed everything. It's been pretty difficult at times but I've realised I just need to trust myself and my choices. At the same time it's also brought me some incredible experiences. I honestly had THE BEST SUMMER EVERRRR! And I made at least one new amazing friend and reconnected with a lot of people from the past.

Over summer I went to Love Saves the Day, Bristol Pride, Manchester Pride, Bristol Harbour Festival and had a whole load of other weekends away where I made some great memories. I was kind of scared all that would stop once September arrived but actually, I've seen so much of my friends and think I'm pretty much booked up until the end of February with activities...

This year also saw me start a new job in a new office and move my life back to Birmingham. I knew at the time it would either be the best decision I could've made or the worst. It was a completely new role to adjust to during a pretty turbulent time in my life, so for the first few months I thought I'd possibly made a terrible mistake. However now, from the other side, I know I 100% did the right thing so I get to breathe a nice sigh of relief! I love the office, I love living back in the city, I love the people I'm working with and I think the role is really helping me grow in all the areas I aspire to excel in.

I've never been in a rush to grow up but I'm doing a bit of adulting... I've been making a conscious effort to get rid of any credit card / overdraft debts I ran up during my time living near London and I'm getting there. I also have some savings to use on a deposit so I can hopefully get my own flat in late 2018 or early 2019 (let's say late 2019, given the number of holidays I seem to have already committed myself to next year...) I'm ok with that, though! I'm fortunate enough to live in a part of the country (well, now...) and have a job where I can have a balance of spending my money having amazing experiences and also save a little bit on the side. I don't want to sacrifice the memories I know I'll make with my friends but obviously I need to have some sense of responsibility and plan for the future a bit.

I'm not really big on resolutions or goal-setting but I thought I'd look back on what I said I wanted to do last year and see what I'd like to achieve in 2018. I'm not *quite* ACII with my professional qualifications, however I'm just a handful of essays away so will be looking to achieve that by February at the latest. I did manage to scoop myself three awards for my results along the way, though, so maybe that counterbalances my current lack of effort?

Of course getting the flat is up on my list of priorities. Realistically, I do think that'll be 2019, however I'd like to have started looking by next year and get myself a mortgage in principle.

At work I'd obviously just really like to progress in my role. A lot of change tends to go on within companies though, so you can never say what you think 'the next level' will look like. At the moment I'm interested to see where my team goes!

I don't have any specific blog goals, though of course I just want to keep delivering content people are interested in and will engage with. I've kind of already achieved more than I'd ever have thought I would, so really I'm just happy to keep going as I am.

During 2017 I got back into writing in a big way. It's always been a huge part of my life and of who I am, really, however I'd kind of fallen out of the habit of writing for a few years. Different versions of the same story have been swirling around in my mind pretty much since I was a kid! I'm an excessive perfectionist so there are at least 10 abandoned versions of the story on my laptop, however this year I decided to make a promise to myself: to finish it before trying to change everything, and it worked! I've written over 85,000 words, so in 2018 I'd love to finish the novel. I guess being a writer is a pipe dream I've always harboured, so once I've edited and perfected it, who knows; I might try and submit it to some agents! I'm not sure how many people reading this blog are aspiring writers but if you'd be in any way interested in hearing about my journey to the first draft then I'd be more than happy to write a blog post sharing this experience.

Book: Americanah by Chimamanda Ngozi Adichie | review
I'm going to link my full review on each of my lifestyle favourites so I'm not repeating myself, however in brief: this is a beautifully written book that takes us on the main character's journey from being a child to being a woman. It tackles themes of immigration from Africa to the West, gender, sex, race, relationships (and I'm sure a whole lot more) with such grace. I'd been meaning to read this for aaaaages and I'm so glad I decided to tackle it in 2017.

Book: The Power by Naomi Alderman | review
The Power imagines a reality where women across the world suddenly find themselves developing electrical powers, which begins to upset the established hierarchies in society. It's told from several angles and cleverly employs social media, journalism and religion to explore the event and its repercussions from all angles.

Book: Children of Time by Adrian Tchaikovsky | review
I really have to applaud this book for its sheer ambition and scope, which it pulls off pretty effortlessly. The story is told over thousands of years and revolves around the last humans surviving a nuclear war on earth and their quest to find a new home (which puts them in direct competition with a life form they didn't expect to evolve). It explores some fascinating moral, philosophical and scientific themes, so if that sounds like your kind of thing then I totally recommend checking this out.

TV: Westworld
I watched Westworld right at the start of this year and have to declare it as one of the best things I've seen on TV in a long while! It takes place in the future, where the rich and wealthy's idea of having fun is to visit a theme park mocked up as the wild west and populated with incredibly realistic androids (hosts), with whom they can do what they like. The story begins as some of the hosts begin to exhibit some strange behaviours. The underlying question it poses is: 'what makes us human?'

Film: Moonlight
This is such a beautifully done film - it's a simple story on the surface about a boy becoming a man, but it's so much more than that too. It explores themes of masculinity, poverty, addiction and sexuality and every part of the cinematography, from the music to the camera angles, is designed to evoke a reaction.

Film: War for the Planet of the Apes
This Planet of the Apes prequel series has been amazing on so many levels! It just delivers in every way you want it to: it has the action, the amazing motion-capture acting, a great plot and continues to raise very interesting questions as the last of the human race launch an attack on the apes.

Film: Arrival
This film is actually from 2016, but I only caught it on TalkTalk TV this year. It effortlessly tells a story containing big ideas in an incredibly simple, intimate-feeling narrative. Amy Adams plays a linguistics professor who is brought in to communicate with an alien life form, which has mysteriously appeared without explanation on our planet.

Podcast: The Cracked Podcast
This isn't a podcast I listen to every single episode from, however there are some really great ones! It's in the same humorous, interesting and informative style of the Cracked website. I recommend checking out How Germs Control Your Politics (I took it with a pinch of salt but it's still a very interesting perspective on the way in which we form a discourse around immigration), Jafar is Disney Moses: Secretly Heroic Villains (which talks film and TV tropes and tries to realign some of pop culture's most notorious villains), Movies That  Teach Men Horrible Lessons About Sex, The Enormous Lie About Modern Life (You Likely Believe) (this explores the idea of people always talking about society as though things are getting worse), Why Modern People Might Have the Worst Sex Lives Ever (a conversation on how relationships have evolved since prehistoric times), How Depressing Entertainment Became the Norm and Shockingly Sexist Messages in the Modern World. I even actually spent money to listen to the archive...

What were your 2017 lifestyle favourites?