My Week in Lipsticks #5 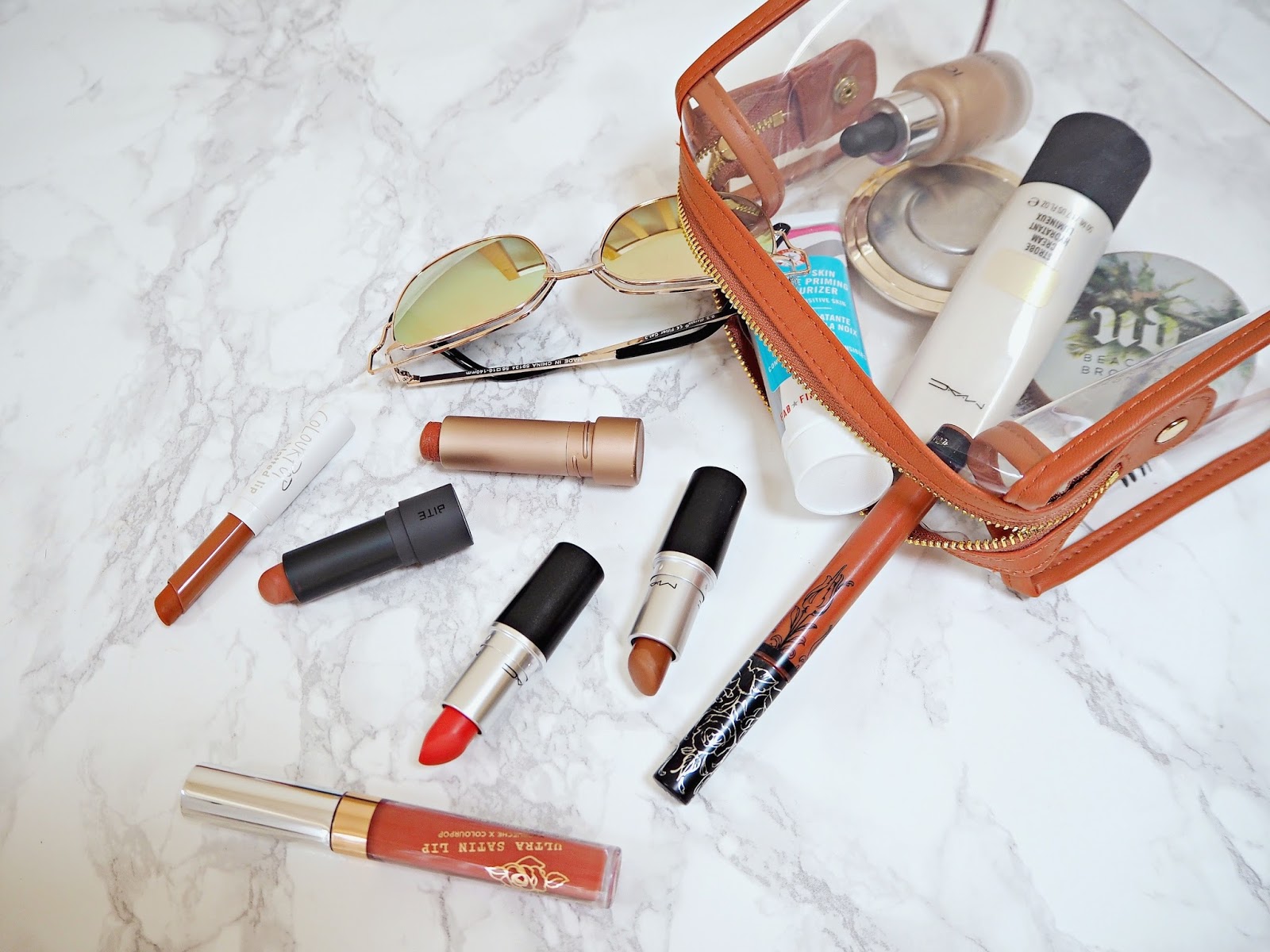 I had a really busy, lots-of-fun week around the late August Bank Holiday, so I thought it would be fun to do another of these My Week in Lipsticks posts. I started doing these a while back to let you know what I've been up to as well as which lip products joined me for the experience, so I hope you enjoy another beauty and lifestyle post rolled into one.

This was a bit of a surreal day; you know one of those ones where you can't quite compute that everything you did was in the same 24 hours? I started off at work getting some admin out of the way (whilst enjoying some of the office samosas after having had a work event the night before) and tying up any loose ends before my holiday. It was a half day though, so with the sun shining and the knowledge I was off until the 4th of September, I hopped on the train up home to Manchester. I needed a few treatments doing before my holiday so got a haircut and my eyebrows tinted and threaded (both were much-needed) and then checked in with my friends at the Airbnb we'd got for the weekend. Everyone arrived from their various places in dribs and drabs throughout the evening but it was great; we got tapas, went out near Spinningfields (to my usual haunts of Mojo's and the Liar's Club) before collecting our wristbands for Pride and heading out to G-A-Y until the very early hours!

One of my favourite day-to-night lip shades has to be Strip Me Down, which is from Taraji P. Henson's collaboration with MAC. It has a creamy, opaque, smooth consistency but lasts for hours and has a true matte finish. What I really like about this brown-beige nude shade is that it looks sophisticated enough to wear around the office, however if you pair it with a brown smoky eye, it's also perfect for the evening. Unfortunately I don't think it's available any more but Velvet Teddy (slightly lighter and cooler) and Taupe (a touch deeper and richer) are both decent alternatives.

It was admittedly a slightly lazier start than we'd envisioned the next day, however after avocado toast with scrambled egg and a bit of glitter, the group soon felt livelier. The weather held out for us and there was such a great vibe at the event. There's essentially a huge parade through the city centre and the entire Gay Village is cordoned off so everyone is just partying and having an amazing time in the streets! I can't say we caught many of the acts, however we had a laugh and ran into so many people we all knew from various parts of our lives. We also saw the best drag queen, like, ever outside New York New York... We did pop back to our rental for a couple hours in the evening to rejuvenate a little bit and it was a good shout because everyone felt a lot better after that (I honestly thought I was going to call it a night up until that point!) We went out to Club Bloom, which was good fun, though definitely ended up having an earlier night than on Friday!

I went for a warm-toned makeup that I knew would last and take me from day to night. The Kat Von D liquid lipstick formula was perfect for this. The consistency is very fluid but sets down to be completely matte, but doesn't have an overly drying finish. It lasted well throughout the eating and drinking, though of course over the 12 hours I wore it for, I did re-apply a couple of times! It's a warm rusty nude colour that's a little bit more than a nude but is still fairly muted so didn't detract from my bronze smoky eye look.

It's safe to say that we'd all been dreading having to be up and ready with the flat looking spotless by the next morning at 11am, however it could've been worse and it actually got us up and doing stuff a lot earlier than we would have been otherwise! We went to a really great place I know in the Gay Village called the Richmond Tearooms, which is Alice in Wonderland themed and had some much-needed brunch. We then headed back to outside New York New York, which was pretty dead on arrival, however over the hours we were there it quickly became another street party with a drag act and the weather was again beautiful. After grabbing some sushi before the last of the group got their trains back home, I headed back to my mum's for the evening and watched Netflix in bed whilst Whitney Houston played on loop in my head!

It was one of those days where I was absolutely rubbish at re-applying my lipstick (I guess I was having too much fun?) I'd opted for a ColourPop Ultra Blotted Lip, as they have a low-maintenance but long-wearing formula. It's hard to describe as it's almost like a very pigmented lip stain that comes in stick form. It doesn't feel drying but is definitely matte in finish, yet sheer at the same time. Candyfloss is a warm, quite vibrant orange-coral tone.

After a nice, early night, I got up early to finish some last bits of packing and then headed to the airport with my mum for a few days in Palma, Mallorca (check out my Instagram tag for the photos). The flight was pretty painless (despite a few screaming kids...) and I just shut my eyes and listened to The Power by Naomi Alderman on Audible. Once we landed, the weather was definitely disappointing, so we headed out to explore instead of lying by the pool as planned, and it soon brightened up. We had a walk around the town to see what was there and it's actually such pretty place! I wasn't sure what I was expecting but it definitely exceeded whatever that was. After our wander, we went for dinner at Cafe C'an Toni which was really great and had so many seafood options for me!

For the day, I opted for the failsafe option of Fresh Honey. It's a tinted lip balm containing SPF15, however don't let that make you think it isn't pigmented, because it actually gives a really nice wash of colour. It's a warm, orange-toned brown nude shade that's perfect for a 'my lips but better look', though admittedly does need re-applying a few times throughout the day.

During the day we spent pretty much all of our time just relaxing in the sun by the pool at the hotel, having a couple of drinks and reading. I definitely drifted off more than once! Then in the evening we got a quick bus to the main area of Palma for dinner at a restaurant called L'Ospite. Although I generally wouldn't go for an Italian whilst in Spain, this was conveniently-located and had excellent reviews. It didn't disappoint at all; the food was amazing and actually really good value. We had a drink before getting a taxi back to the hotel.

During the day it really was a minimal makeup affair, however in the evening we popped back the the room for an hour or two to freshen up before dinner. I went for a slightly brighter, more coral-toned makeup look than I usually go for, finishing with ColourPop's Mrs on the lips. I love their Ultra Satin Lip formula - it has all of the benefits of a liquid lipstick in terms of longevity and pigmentation, however feels much softer and more comfortable. It doesn't quite give a fully matte finish so transfers slightly, however for how easy it is to wear, I really don't mind. Mrs is a deeper coral tone from the Fem Rosa collaboration with the singer Karreuche.

We just had another bit of a poolside chill and a casual lunch until the later afternoon so I was just wearing my Glossier Coconut Balm Dotcom, however after freshening up, we headed into the main part of Palma around 4ish. We had a bit of a wander and of course visited Sephora and a few of our other favourite European shops before going for dinner. We got really great (and very affordable) Tapas at Bar Espana before having a drink back at the hotel and a comparatively early night!

For the second half of the day, I opted for one of my favourite summery lipstick shades: MAC's Tropic Tonic. This actually has a really nice formula; it's quite creamy and goes on very smoothly. It's matte but doesn't feel drying and the longevity is pretty good too. The shade is a vibrant pink-orange coral tone that really lifts the complexion.

Our last day in Palma came around far too quickly! The morning was forecast to be cloudy, so we took the opportunity to make the climb up to Bellver Castle, where there were some incredible views. It hotted up again around lunchtime so we relaxed at the hotel for a little while before going back into Palma to see the cathedral, which was absolutely stunning and breathtaking! Sometimes cathedrals are more of an external architectural feat, however this one is so worth going inside. We did a bit more shopping, then got tapas near where we were staying and headed back for an early night.

I opted for the second Bite Beauty lipstick I made last year at their Lip Lab in New York (so unfortunately it isn't available to buy!) It's a warm coral tone that's a little more vibrant than a nude but is still very easy to wear. The formula is lovely, gliding onto the lips and being very easy to reapply, whilst still giving you that matte finish and amazing wear-time. 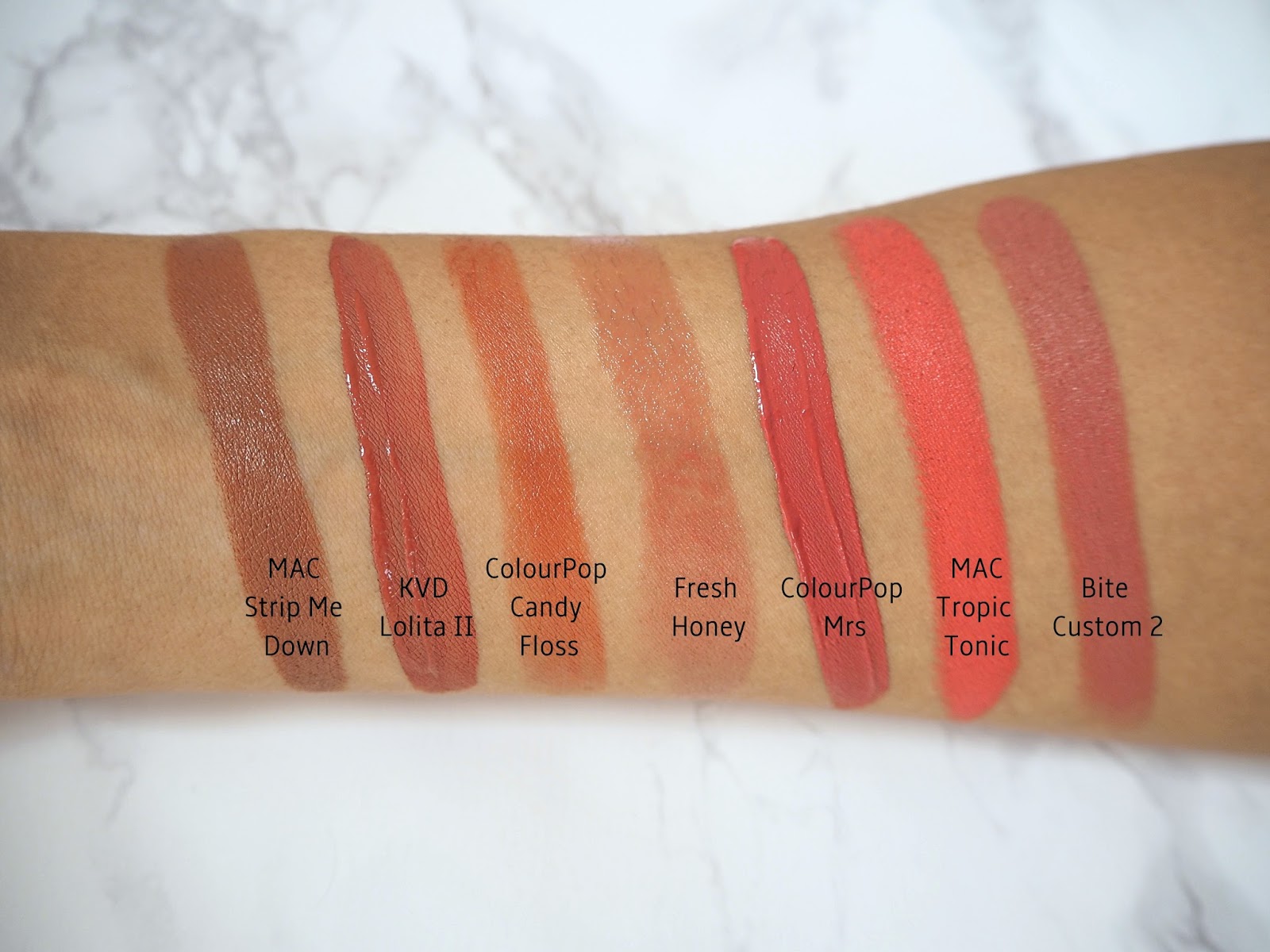 Which lipsticks have you been wearing lately?