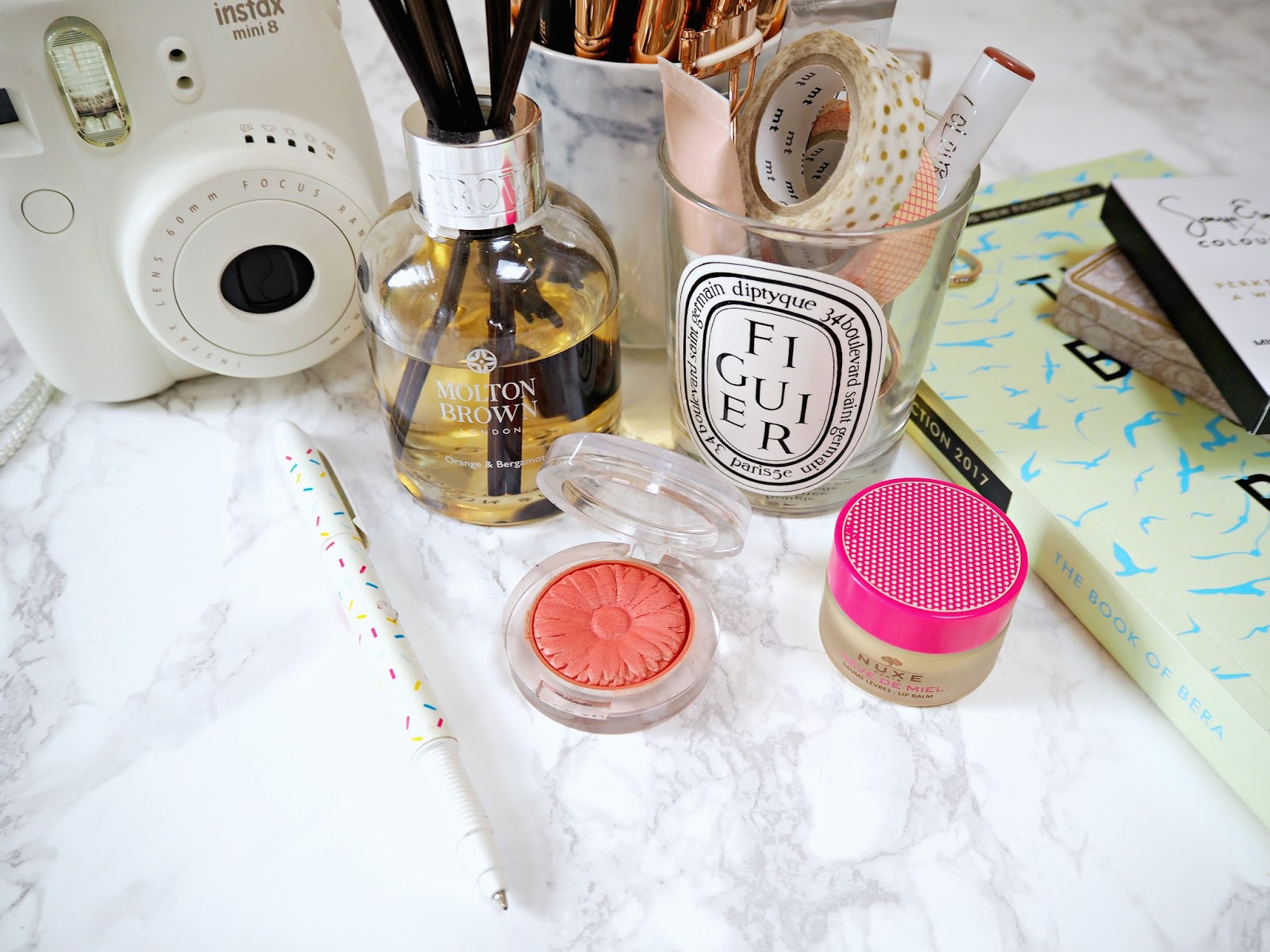 Over the past few weeks since we last caught up, a lot has happened both in my life and in this country, it really is crazy to look back at how things have changed. Whilst I thought I should acknowledge all of that, I still want to share my life snippets in my usual positive way today.

Right after my last Sunday post I went for a weekend back home in Manchester. It was lovely to see my mum, catch up with friends and also just enjoy a few home comforts! I really need to start doing this more; there doesn't have to be a 'reason' or an event. I was actually pretty ill with a sinus infection at the time, so it was a welcome break.

I also had some exciting news in terms of the professional qualifications I've been slogging away at. I'm now finally Dip CII and a long way to getting ACII, which is really exciting for me. I also won two awards from my local institution for my performance in some of the modules I took, which meant I got a nice bit of cash out of my extra effort!

For the Bank Holiday weekend we had this time last month, I was down in Bristol with two of my best friends. On the Saturday we chilled, did some shopping and had brunch at a place called Spoke & Stringer (what I ate) and then ended up having quite a late night out. Then the next day we met with a few friends and friends of friends for a BBQ and an amazing time on Sunday at the Love Saves the Day festival. The weather didn't quite hold out but it was such a great atmosphere that I barely cared. And I guess the fact we got to go home to a warm bed instead of a wet tent at a camping festival did help!

Of course the weekend after that was my birthday celebrations down in London - you can check out what I got up to here but I had a fantastic few days off work and over the weekend afterwards, my mum came to visit me in Birmingham for shopping and lunch, which was really lovely.

For the second weekend in June my group of girl friends headed down to London, as one of the girls has just moved into a flat in the north of the city. On the Friday we went to the much-hyped Dishoom in Shoreditch. You can't book so we literally waited hours! It was kind of ok though because you can order drinks and small plates at the bar and one of my friends was fasting anyway, so we couldn't eat until half 9/10 either way. It was one of those weird occasions where your starter is really good and your main disappointing! I think because it was so raved about, I was expecting something really special but it was only 'ok' - I can easily name 10 places in Birmingham and 10 in Manchester where I've had better curry. It was affordable for London though. We were so lucky with the weather and took a stroll down the canal to Broadway Market on the Saturday. It was really fun and lively and I had the most amazing lobster mac and cheese. We then finished at the Netil360 roof bar in the sun with music and such a relaxed atmosphere.

In the evening we got dressed up, had a few drinks and went to a nice (largely Italian) restaurant called Sager + Wilde with some of the friends we went on holiday with last year. It was great to catch up and the cocktails were so good... The next day, a couple of the girls had other family plans, so before I headed back home, I went for a stroll around Angel with the friend who lives there. There are so many cute independent shops and we had an amazing, affordable brunch at La Farola (what I ate). It's supposed to be like brunch tapas but we had one each with a side, juice and coffee and that was plenty!

The Book of Bera* (Suzie Wild) | I was kindly sent this a couple of months back by Unbound and it's the fiction book I'm reading at the moment. As an aspiring author, the concept definitely appeals to me and is something I can support! Essentially this is a way of publishing through crowd funding (think of it as a Kickstarter for literary projects). This is a young adult fantasy novel (AKA my ultimate guilty pleasure) set against a Viking backdrop. It has a female main character, which I'm always a fan of, and I'm intrigued by both the story and how the world it takes place in is gradually being built and revealed. It's definitely worth checking out if you also enjoy this genre, and having a peruse of the website to see if there are any other works you'd like to support.

Quiet: The Power of Introverts in a World That Can't Stop Talking (Susan Cain) | I generally have one fiction and one non-fiction book on the go, so I can switch depending on my mood. I'm around 2/3s of the way through this and I'm really quite enjoying it. It takes you through the psychology and social elements of the introversion and extraversion dichotomy in a way that tells a story. Susan investigates everything from how the brain reacts to stimuli under an fMRI scanner to highly sensitive people to life coaches that get up in front of thousands of people to tell them how to be a success in life. Although I think I'm an introvert, I'd say it's a relatively mild preference, so I couldn't relate to some elements of the book, but it's still worth a read even if you're just curious as to what makes certain people tick.

At Home With... | I seem to go through phases with podcasts; I'm either hooked or not interested at all! This new venture by beauty bloggers The Anna Edit and Lily Pebbles does what it says on the tin; talks about life, beauty and passions with some amazing women from their homes. It's just a nice, relaxing, sometimes affirming thing to have on in the background when I'm on blogging or to listen to on my commute. The only flaw I find with it is that you obviously can't see what pieces in the homes they're discussing on the standard iPhone podcast.

Molton Brown Orange & Bergamot Aroma Reeds* | This is such a beautiful product! It softly and naturally spreads the spicy, fruity scent around the room, ensuring there's always a nice background fragrance. I have it in my bedroom but it would also be a lovely scent for the hallways, so people walk in and can instantly smell it. This is definitely my home favourite for the month!

Unbreakable Kimmy Schmidt | I literally watched all of this from start to finish in about 2 weeks. I was ADDICTED! I even found myself saying 'oh fudge'. Out loud. In real life. Whilst 'UNBREAKABLE THEY'RE ALIVE DAMMIT' played on a loop in my head. This is a sitcom about a woman who is freed after being kidnapped by a cult leader and held in an underground bunker for years. She then heads to New York to live with a flamboyant failed Broadway actor and work for a wealthy socialite. Sound random? Well, if you can't handle weird, then this isn't the show for you - out of context, it's just downright bizarre. However once you're submerged in its offbeat humour, it's totally hilarious.

Dear White People | I feel like a lot of people are put off this show by the provocative name! (Which is cleverly pointed out in the show itself...) Paradoxically they're probably people who should watch it. This is essentially a satire of Ivy League colleges (i.e. the US's Oxbridge) told through the eyes of the small number of black students. It's funny, sad and often uncomfortable, but SO worth watching on Netflix. It examines so many issues from different perspectives in a way that made me laugh at times but also tear up.

Cosmos: A Spacetime Odyssey | I've had a lifelong fascination with space and this makes those big concepts and ideas accessible for those of us who don't have a particularly scientific background. It's also presented by Neil DeGrasse Tyson, whose sheer joy and enthusiasm for science really comes across.

American Gods | This is an interesting show, based on the Neil Gaiman book. Essentially it takes place in the US, where the Old Gods of mythology have to battle it out against the New Gods of technology. I think if there's one thing wrong with this show, it's that it's too short! It has so many engrossing moments and then pulls back and you never really get to connect all of the pieces of the puzzle. It felt as though it kept 'just getting started' and had a few moments of brilliance but we're still very much at the start of the story and there's a lot I want to see developed in the next series.

What have been your lifestyle favourites recently?