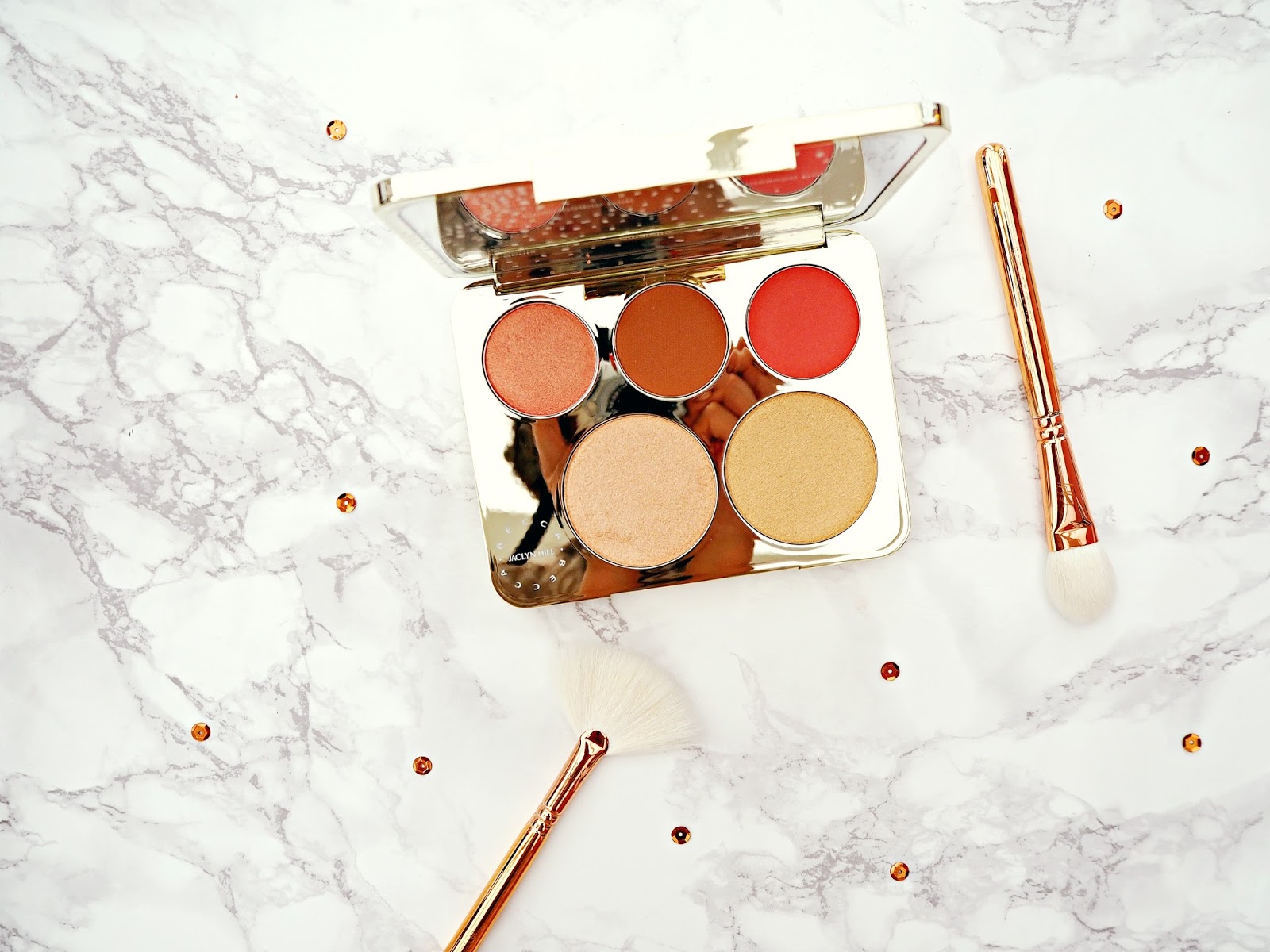 When I first saw this palette on social media: I fell in love. When it was available for pre-order on Space NK I snapped it up as soon as possible, however a lot has happened between then (the 1st of June) and the palette arriving at the end of that month... I guess I'm a little late to the party, however I care about giving you guys the most in-depth review possible, not being the first person on the Internet to post on this after using it once! The palette is currently sold out and I'm not sure if it's coming back. However it has been announced that the shades will be released as duos (again, this will be a limited edition collection) so an eye on Space NK (where the full palette is £48) and Sephora (where it is $52 + tax)!

When it was first released I obviously really wanted it however I did think it was a bit over the top that so many people imported it from Sephora with all the additional costs when we all knew it would be available in this country just a few short weeks later! I came very close to ordering the eyeshadow palette too however I just felt I had similar shades in my collection already. Unbeknownst to me, that was a very good decision!

In case you've been living under a rock about the whole palette controversy: here is a brief run-down! After the initial launch, a lot of bloggers/vloggers and Becca fans seemed to be commenting that the Champagne Eye Collection was not the level of quality they expected from Becca eyeshadows. The internet detectives did some digging and discovered the palette was made in China, as opposed to in the US like the Becca Ombré palettes. I also watched a video where a YouTuber who is a big fan of Becca eyeshadows went through the ingredients list. Many of the more expensive ingredients were missing and when she did a search of what was listed on the back of her palette, the first results on Google were eyeshadow palettes from Essence and Catrice (if you are not familiar with these brands, their products retail around the £4-8 mark). Don't get me wrong; I am not saying these brands are complete rubbish but when you're paying for Becca quality, it is not what you expect.

Some people have commented that they like their Champagne Eye Collection, which is fine, however it seems that amongst owners of Becca's other eyeshadow palettes: the jury is out. Don't get me wrong; I'm not completely naive. I know that when I buy my £5 Morphe brush it isn't going to be some super-special exclusive design but I don't really care because I like it and it's barely any more expensive than my morning coffee! However Becca has positioned itself as a premium brand that delivers something unique that is worthy of a hefty price tag.

Becca have claimed that there was an initial batch made to their usual standards (around 30% of what was put on sale), however the rest were not up to scratch. I'm a little dubious but either way you cut it I think they've done themselves serious reputational damage and just cheapened their brand. A lot of people are praising them for being honest but in my view: what choice did they have? They'd been caught with their trousers down. They intentionally tried to con their customers and were found out...

I'm becoming more and more sceptical of YouTuber/brand collaborations in all honesty because I'm starting to feel like it's become a way for brands to make a quick buck off super-fans who will pay anything for something with their favourite YouTuber's name slapped on it. Sell people Essence eyeshadows at Becca's prices, put Jaclyn's name on it and laugh all the way to the bank... Except they got caught. It's nowhere near as extreme but it reminds me of the Manny MUA x Makeup Geek palette where they charged the price for each individual single and then some (I have honestly never seen a non-designer premade palette retail for so much in comparison to singles - for context a single Urban Decay eyeshadow is £14 vs £38 for a Naked palette). It sold out in minutes because as long as people will pay the money for collaborations, brands will charge as much as possible.

With all due respect; Jaclyn is not a cosmetologist so there's a limit to how involved she could be in the process of making the palette beyond approving the colours, design and so on. Obviously I don't know if she was aware of the issues with the quality or not, however the whole thing hasn't reflected very well on anyone.

So all these thoughts were swirling around in my head when this eventually came through my letterbox. When I ordered it I was so excited. When it arrived I kind of had a sinking feeling. I'm not going to lie; the whole controversy has made me want to really scrutinise this product. I'm no scientist and have never pretended to be on this blog but I'll do my best to analyse every aspect of the product. Out of the products in the palette, I do already own Champagne Pop as a single so I will be comparing the formula and ingredients and doing comparison swatches of the single with the version that appears in this palette. 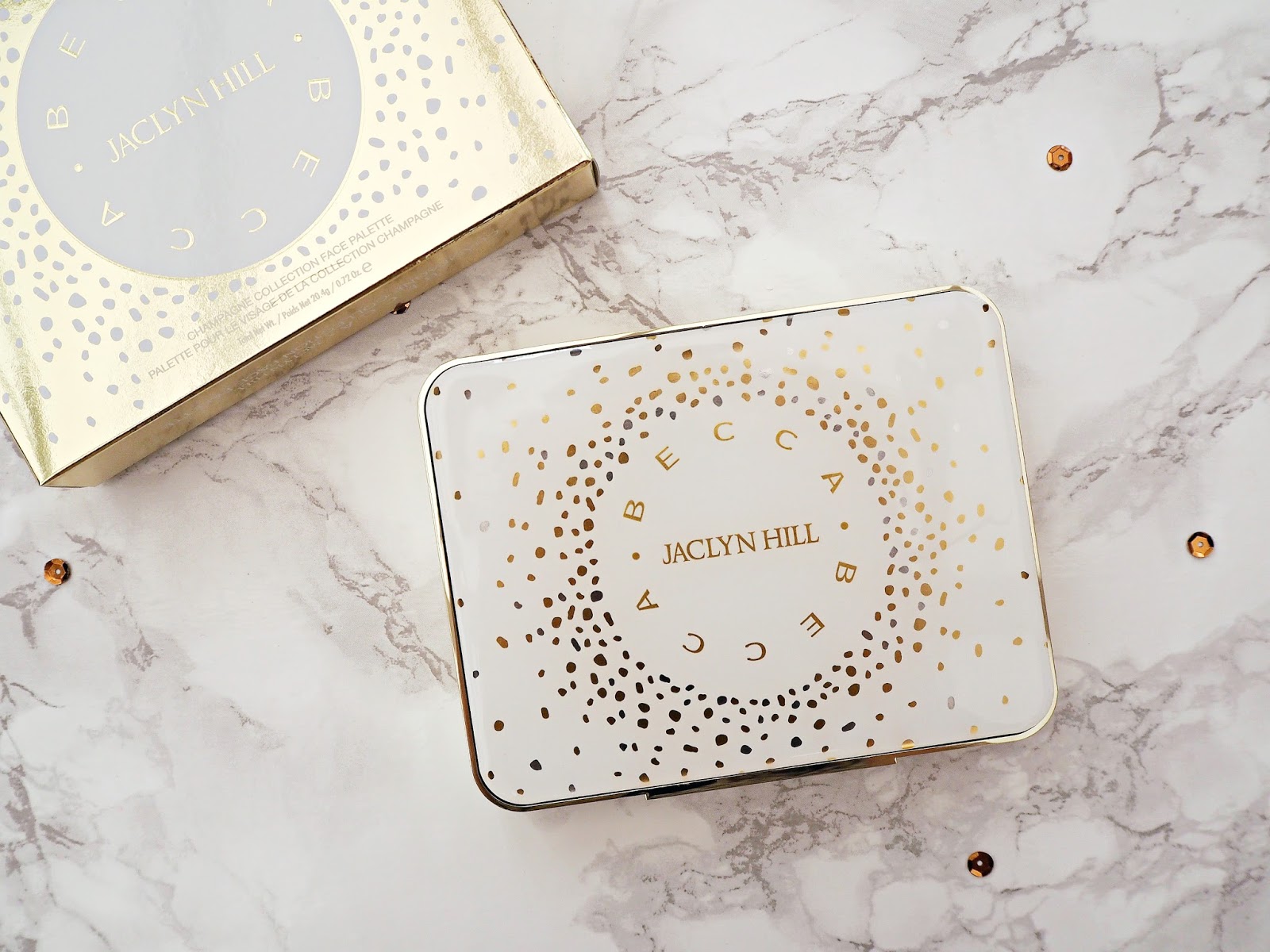 Of course the packaging is stunning and I expected no less! It's made out of a sort of gummy-textured material with a gold-look metal finish. There's the Becca logo with Jaclyn's name on the centre of the lid surrounded by a confetti effect in gold and silver. It has some weight to it that gives it a premium feel without being too heavy or bulky. Inside, there's a really large, good-quality mirror which I can use to do my entire face of makeup when I'm travelling. The clasp is very secure as well. The entire palette is so much more secure and travel friendly than the singles (I always refused to travel with Champagne Pop because the texture is so soft I was convinced it would smash!) and I've had no issues taking it away with me. This is really handy because it's a great travel palette; you can just go away with this to do your cheeks and have so many options. 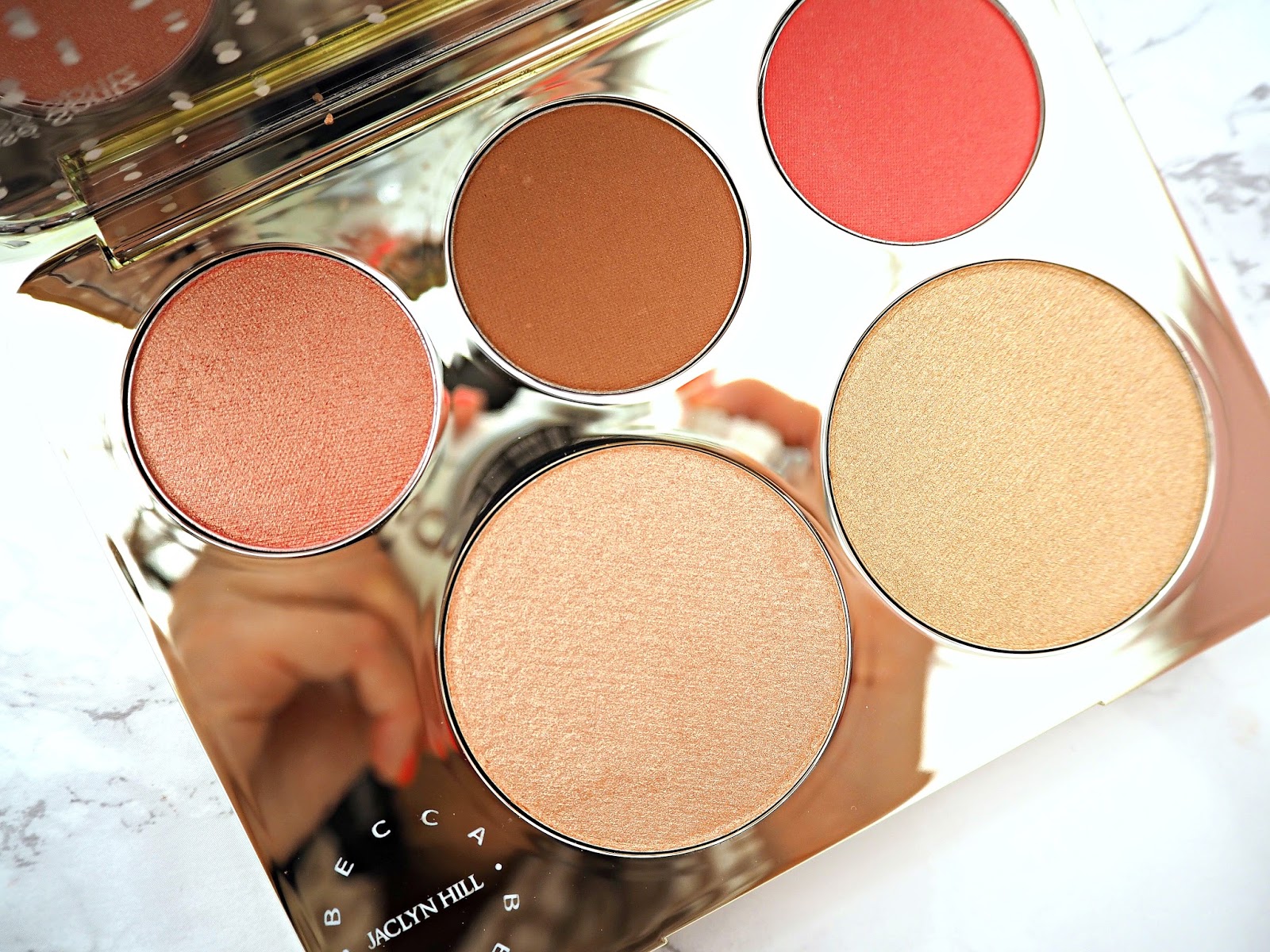 I've actually never tried a Becca blush so I can't comment on how these compare to the permanent singles. Inside the palette you get 3 shades: Rose Spritz (Luminous), Amaretto (Mineral) and Pamplemousse (Mineral).

The Luminous formula is essentially like the Pressed Shimmering Skin Perfector formulation in a blush. It has that super-dewy, pigmented, almost cream-like formula. Rose Spritz is a pinky-peach with a gold shimmer that's almost like Nars Orgasm on steroids! It applies so beautifully and evenly and after a full day of wear it doesn't go uneven or patchy (though it fades slightly beyond the 6 hour mark).

The Mineral formula is more like a traditional blusher and has a more matte finish (though these shades have a very slight sheen and still look very luminous). The colour payoff with them is seriously incredible! Amaretto is a warm brown-toned nude colour that could even work as a bronzer on fair skin. I find this very easy to apply and get an even finish with. It does fade a little during the day but it doesn't look patchy so I don't mind too much! Pamplemousse is a seriously vibrant hot pink colour. I find the formula to be consistent with that of Amaretto, however perhaps because it is so intense-looking, I don't notice it wearing away so much.

When I want something super-vibrant I go for Pamplemousse, for a glowing Summer makeup look it's Rose Spritz and with subtle everyday makeup I opt for Amaretto. However you can easily layer these up and a little Rose Spritz on top of Amaretto really makes it pop. 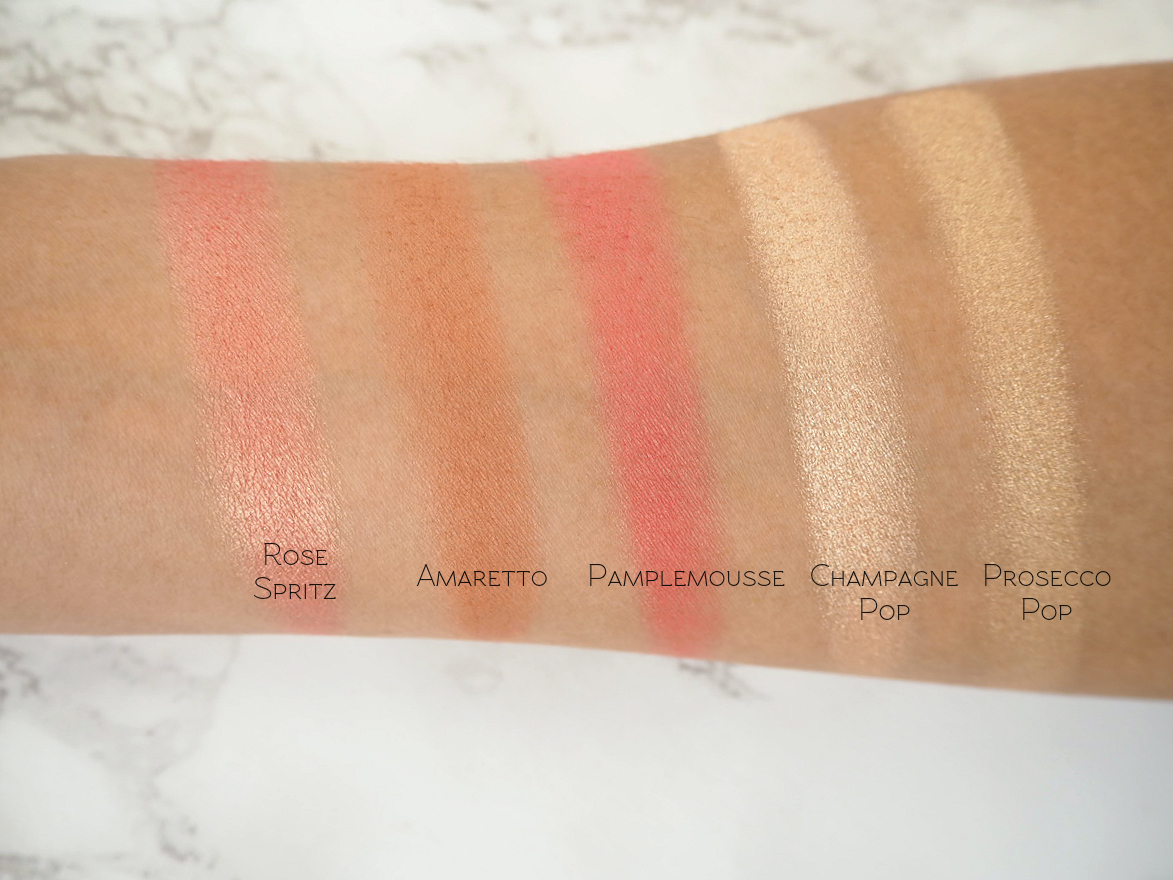 If you've never tried a Becca highlighter: you've been missing out in life! Their most intensely pigmented formulation is the powder, which they bill the Shimmering Skin Perfector Pressed. Despite being a powder they are water-based and have this almost cream-like soft, dewy, metallic formula. They really are on another level to anything else I've ever tried. They blend out beautifully so sit very naturally on the skin. The pigmentation means they are definitely a full-on highlight though, so for an everyday look I tend to apply these with a fan brush. They don't wear away during the day and the formula doesn't contain any glitter, which makes them so unique in finish.

Champagne Pop is of course the shade that started it all and is probably my holy grail highlighter. It's this sort of champagne-gold with a hint of peach. It won't be for everyone, however as far as highlighters go; this is as universally flattering as it's probably going to get because I've seen it look amazing on so many skin tones.


Prosecco Pop is a new addition, exclusive to this palette (for now...) It's a really true gold tone. On its own Champagne Pop looks quite gold in the pan, however this takes it to another level. I can see this might look a little bit yellow on paler or pinker skin tones, however I love it and I think it's perfect for medium-dark skin. Again, you can always mix the shades together too. 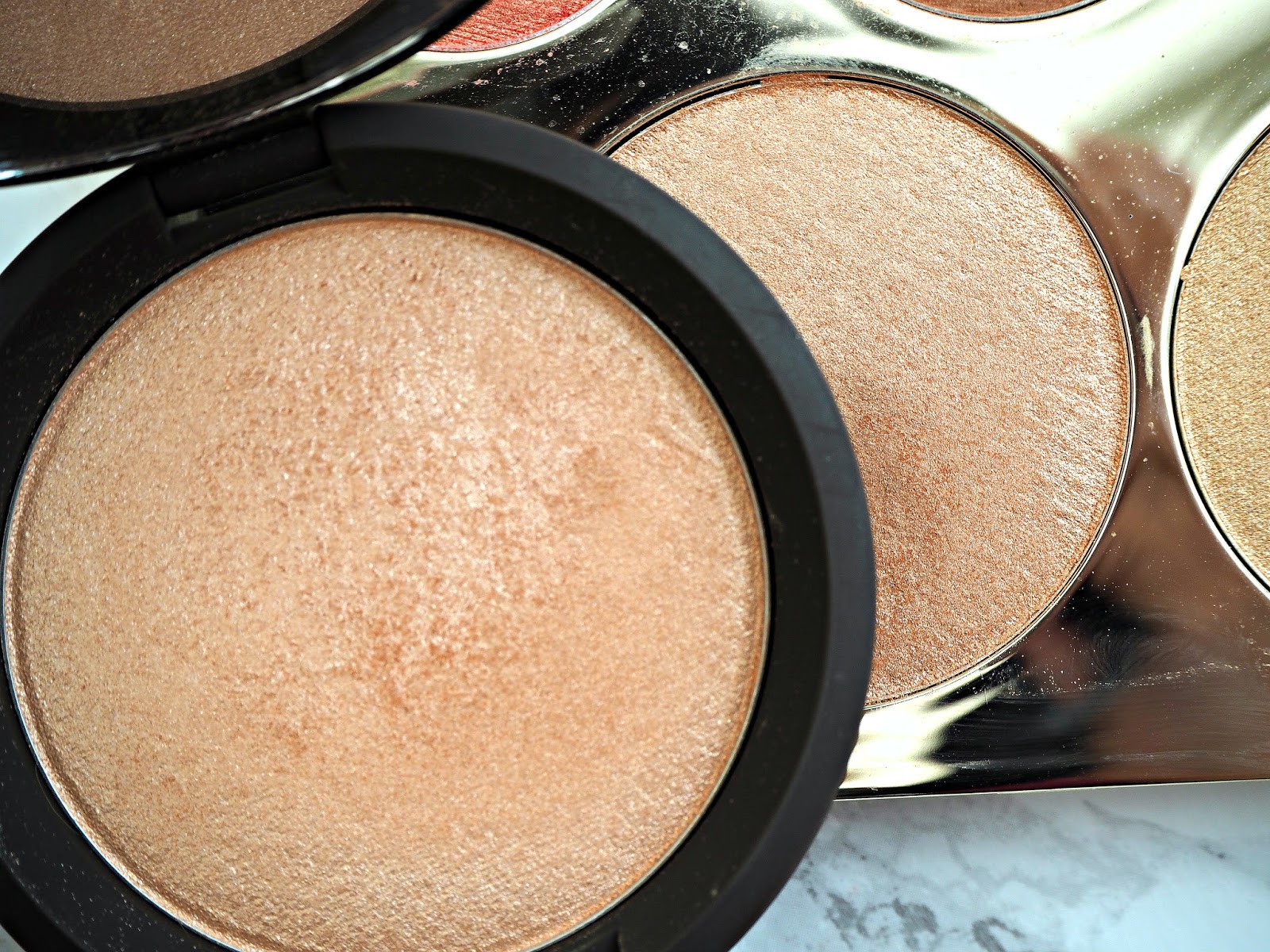 As a bit of a litmus test, I decided to compare the one duplicate I have in this palette with the single, which is Champagne Pop. I did note that here you can see the ingredients in the single do differ from those in the palette. However this isn't necessarily anything sinister; the explanation could be as simple as the fact that the packaging is different so the product needed to be altered accordingly. Plus, personally I kind of expect palettes to be not *quite* as amazing as individual shades because of the saving you're getting on them.

As you can see, the two products are identical in colour. The main difference for me was that the palette version is marginally more powdery in consistency. However it's still got a lovely texture that blends out perfectly, so I wouldn't hesitate to take this away with me instead of the single. It may be that I'm splitting hairs because the eyeshadow debacle has put the spotlight on this collection and it's worth noting that this is still made in the USA and in the same factory as all Becca products except the dodgy eye palette. 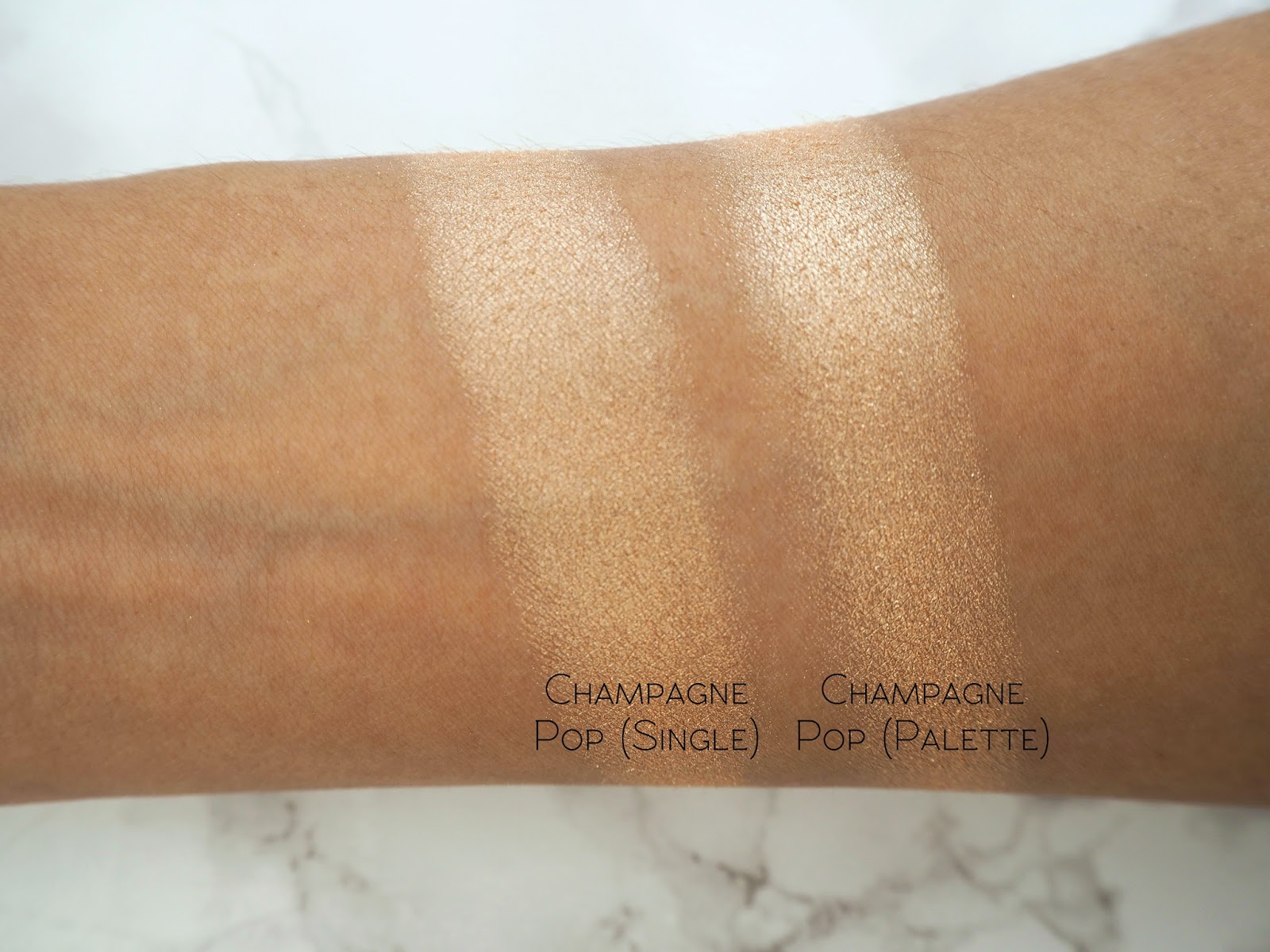 Overall I'm so pleased with this palette and definitely recommend it if you can get hold of it! It's actually really good value for the amount and variety of product you get and how high-quality and luxurious the product is. It's just a shame that this fantastic release has been somewhat overshadowed with the eyeshadow controversy.

Did you manage to get the face palette or anything else from the Champagne Collection?

P.S. Don't forget to enter my giveaway here to win a US & Sephora haul!