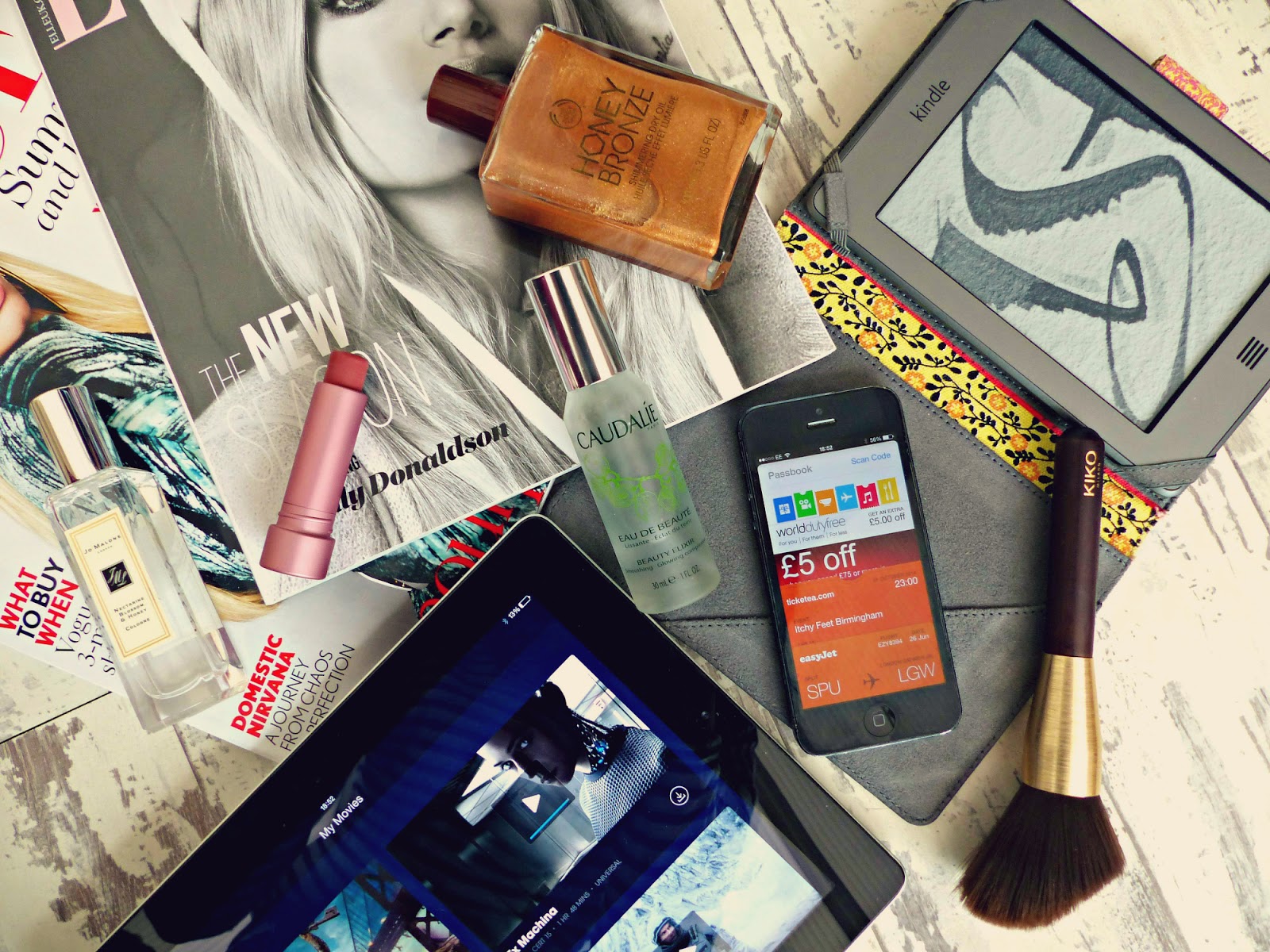 When this post goes up it'll be the day before I head off on holiday so I thought I'd give you a little look at what I've downloaded onto my Kindle and iPad for the journey and days on the beach. Whilst I do love a print book, my Kindle is a must for travelling with limited space. I also have the Blinkbox app for my iPad, which allows me to watch movies and TV shows offline, so is perfect for flights! Of course I always have my iPhone but there are a few things I've downloaded especially for the trip.

The Versions of Us, Laura Barnett

I am a bit of a sci-fi nerd and also a former Philosophy student and a fan of a good love story so this alternate-reality novel really appealed to me. It's had some great reviews and is a Sliding Doors-esque 'what if' relationship novel.

After watching Adichie's TED Talk I knew I had to pick up her much-hyped novel Americanah. The story follows two teenagers who were in love but each move from Nigeria to other countries and head down completely different paths, however years later get reunited. It sounds like such an amazing read and I've been trying to read more 'real life' novels, focussing on the human experience in a modern setting, so I think this will fit the bill!

Completely on the other end of the literary reality spectrum is A New Darkness. This is essentially a book for kids in the same way that Harry Potter is but it's quite a bit darker and scarier (the witches climb out of graves and cast spells using bones and blood...) The Spook books hold a nostalgic place in my heart as I remember every summer a new instalment would be released and I'd read it on my holiday. This is essentially a new series in the same universe where Tom from the original books is now the Spook taking on his own apprentice. I never bothered watching Seventh Son as they changed so much from the Spook books but this is what that film was based on.

This is a book I originally downloaded when I was in my Hunger Games phase and someone recommended it me, saying it was much better-written. It's a dystopian young adult novel set in a world where everyone can hear each other's thoughts, which sounds interesting!

Penryn and the End of Days: World After, Susan Ee

I read the first book in this series a couple of summers back and was pleasantly surprised so I've downloaded the second for Croatia. It takes place after an angel apocalypse and whilst the dystopian thing is very tired, something about the first in this series set it apart from other similar reads. I was really sucked in by this book and the writing, pacing and characterisation were all very strong so I'm hoping the second volume keeps up the momentum.

I like a good YA Dystopian novel for my holidays - ok?! This isn't a very hyped-up one but so many people have raved about it and told me it's one of the best-written ones out there so I thought why not give it a try? It revolves around two teens on different ends of the social spectrum in a hierarchical future United States who cross paths.

Finishing Sali Hughes's Pretty Honest recently definitely made me realise I can be engaged by non-fiction books on topics that interest me. I picked this up after reading an article in the New Statesman ages ago but this summer I finally plan to read it! The snippet on Amazon from Roxane reads: 'Pink is my favourite colour. I used to say my favourite colour was black to be cool, but it is pink – all shades of pink. If I have an accessory, it is probably pink. I read Vogue, and I’m not doing it ironically, though it might seem that way. I once live-tweeted the September issue.' Sounds like my kind of gal, to be honest! It's all about what it means to be a woman in the 21st century and the issues we face. It takes the theory out of the classroom and applies it to relatable pop culture like HBO's Girls, the Hunger Games and Frank Ocean. I'm really interested to finally read this so it'll be at the top of my list.

This is a re-watch for me, however I think it'll be a really great length for the flight. I'm obsessed with space and Christopher Nolan so I loved the visuals, the storyline, the music, basically everything about this film... It's possibly one of my all-time favourites and I've even come to terms with the ending.

This is one of those films I was annoyed I missed whilst it was out at the cinema. It's the powerful story of Martin Luther King's march from Selma to gain Civil Rights for African Americans. It also has David Oyelowo who has been amazing in everything I've seen him in so far. Let's hope I don't start crying on the plane!

This flew a little under the radar when it was released but it's had pretty good buzz and has sort-of become a sleeper hit. Sorry, its another YA Dystopian! This one is about a group of boys who wake up with no memories in a huge maze...

I've actually already started this one but unfortunately you can't access 4OD from abroad so I think I'll just download the episode or two I'll miss whilst I'm away to watch whilst travelling as I find this show so gripping I don't think I can wait to catch up! I feel as though things are going to start kicking off very soon but so far this futuristic drama where robots (synths) serve humans has been very intriguing so far as not all the synths are as they seem...

Pretty self-explanatory! You can download a free currency converter app for your phone which will make life a lot easier. Particularly in Croatia, where I'm going, where they aren't on the Euro it can be hard to remember how much you're actually spending.

Most airlines now have apps where you can get flight information and also download your boarding pass to Passbook and simply scan that at the airport. It's one less thing to worry about! Speaking of Passbook, I also downloaded a World Duty Free £5 voucher they sent to me for signing up to their newsletter - try it!

I'm really struggling for music as I don't tend to listen to the charts so I have no idea what's out there unless someone I follow drops something new. I'm really loving Years & Years at the moment and King is still my song but I've downloaded their more recent track Shine which is a great Summer track. I also need to see if Drake has released anything new because I'm always here for that! If anyone has some recommendations, please let me know. I'm mostly liking poppy house music for Summer like Years & Years and Major Lazer's last couple of releases.

I probably won't get through all those books but I much prefer having too much reading  material than having to try to download them over there!

Which Books, Films, Music, Apps and TV shows are you enjoying right now? If you've read or seen any of the ones I've mentioned please share your thoughts!