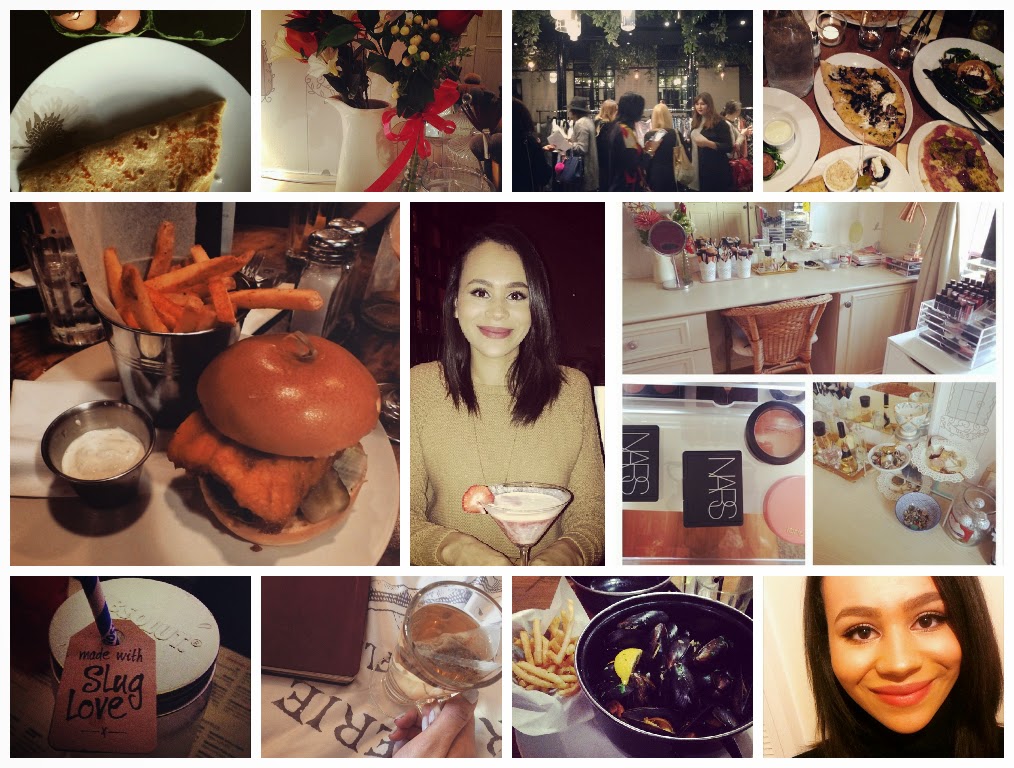 I’ve not done one of these posts in what feels like forever, however so much fun and exciting stuff has been going on so I thought I’d share it all with you now.

First and foremost, I’ve received my formal offer to start the graduate scheme in September for the insurance company I interned with last summer! I’m working with them now in an entry-level position, but now I've been offered their scheme so there are big life choices ahead! I’m hoping to travel a bit before I settle into a graduate role because once you start that kind of job you’re really not going to be able to get away for longer than a fortnight at a time.

I've barely been off Instagram lately and if you're a fan of makeup and other beautiful things I recommend checking out Sarah Loves Makeup, Frock Me I'm Famous, Lydia Rose Smyth and Gh0stparties. I love their photography and the content they show on their accounts so definitely follow them!

I’ve also been enjoying a lot of good food and good company lately. I’ll be posting all about the blogging events I’ve been to recently next week, however I’ve been taking the time to catch up with old friends. It’s a strange feeling after graduation as your friends are often spread out across the UK and in fact the world! It’s really important to me to stay in touch with the people who made those three years so amazing. It’s great how you can not see a great friend in a few months then when you get together again it’s just like it always was! On one occasion I went to Dough in Manchester’s Northern Quarter, which does super-affordable pizzas with just about any topping you can think of. In Birmingham I visited Red Peppers in the Mailbox, which does amazing cuisine from just about every continent and then to the Plough in Harborne, which does food above and beyond your typical pub grub.

As I’ve mentioned before on my blog, my boyfriend was away in New York for Valentine’s Day. So I basically spent the day putting IKEA furniture together single-handedly (the Malm and Alex units from my beauty storage post), which wasn’t the most romantic thing in the world! Though to be fair I've really enjoyed overhauling my beauty storage and putting finishing touches to my bedroom. He came up to see me the weekend after with a bag full of beauty goodies and all was forgiven. We had such a lovely time. As we missed Pancake Day we spent Saturday morning making them together and then that evening we had a Fake Valentine's Day and went to the Vermillion in Manchester. It was one of my favourite restaurants for ages, however they changed the menu last year and removed my favourite meal ever so I didn’t go back! However despite the more restrictive menu, the food was incredible, as were the cocktails and wine, which we had a fair amount of…the next day (slightly hungover) we went to 50 Shades of Grey. It was hilariously awful but in a much more self-aware way than the book ever was. It also seemed to acknowledge that Christian’s behaviour was generally quite creepy, not romantic. Regarding the sex scenes, you could see what they were going for but overall it was far more more cringe-y than sexy! As was the dialogue…

Speaking of 50 Shades, I actually really enjoyed the soundtrack. I’m pretty surprised that the Weeknd now has a top 5 hit! Personally I don’t think it’s his best or even sexiest material, I was such a big fan of his mix tapes but it’s like he dropped off as soon as he started getting paid for his music. I hate to be that person but it’s true! I’ve been listening non-stop to Drake’s new mixtape If You’re Reading This It’s Too Late and I kind of wish the two of them would kiss and make up as they had some great tracks together! Anyway, the mixtape is really great and my love for Drake still burns strong!

In terms of TV House of Cards is back and it's amazing. Me and my boyfriend are marathoning it on Netflix at the moment. I also have to talk about Cucumber. The quality of the series has been patchy to say the least but even the often-unlikable characters felt so real it was like a funny catch-up with a friend every week. However I was not prepared for episode 6, which was one of the best hours of television broadcast in recent years. It was poignant, well-crafted story-telling and the sense of foreboding led to a harrowing ending. I ugly cried for about an hour and if you think that's overreacting you need to watch the episode. I genuinely felt like I needed therapy afterwards. I couldn't sleep! I didn't think I'd ever feel joy again in my life!

What have you been up to lately? Any TV shows, films, Instagram accounts you'd recommend for me?