Recently, events such as Emma Watson's UN Speech and Beyonce's latest album have got a lot of young people talking about feminism. When I managed to miss last Sunday's #lbloggers chat on this very topic I thought it was time to post this! I'm finally feeling confident enough with my blog to talk about my views and the journey I went on to get to them. I'm not perfect by any means and I'm learning how to be better everyday, but this is how I feel right now... 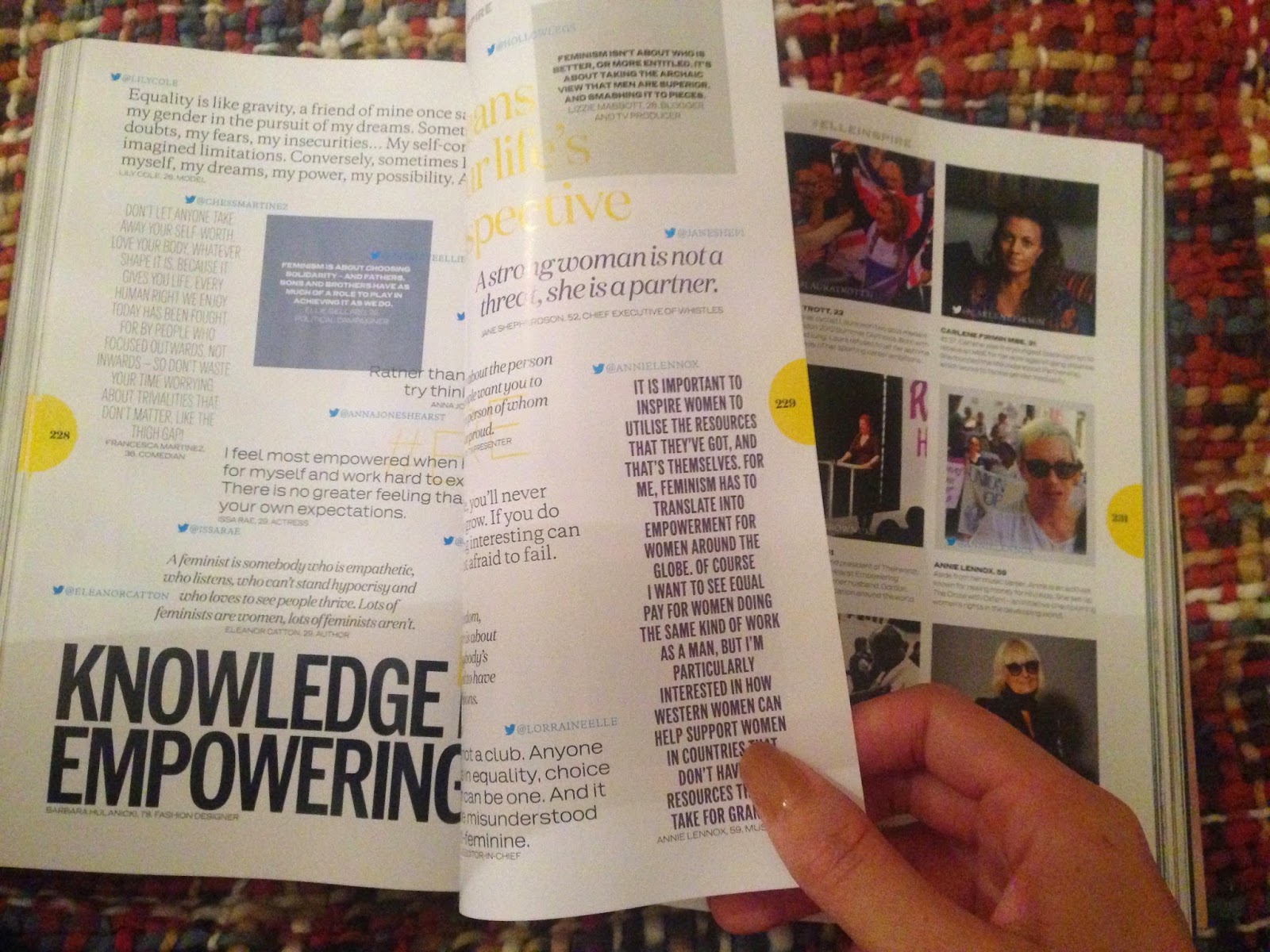 (Rest of the post is behind the cut, as I appreciate this isn't my usual fare and won't be for everyone!)

I don't think I'd really thought about feminism before I went to university, I guess I'd just seen inequalities as a given. I never questioned why the women in my life earned less than their male colleagues, I never thought about why I'd been being harassed in the streets since about the age of 14, why I was called 'bossy' when boys my age were called 'confident' or why I'd been pushed towards humanities and told I would never be good at maths in primary school.

I find it so disheartening that female celebrities are told to avoid using the 'f' word and university-educated women still think it's about hating men and not shaving your legs...Unless you're lucky enough to be educated about things at home or you seek information out yourself, it isn't surprising. I like to keep things simple so, paraphrasing Chimamanda Ngozi Adichie in her amazing TED Talk (which you may have heard sampled in Beyonce's Flawless): "Feminism is the belief in the social, political and economic equality of the sexes". It is not called 'humanism' because historically and today it is women who have been disadvantaged. I believe anyone who holds that belief and it shapes how they approach the world and interact with others is a feminist.

A lot of people do want to complicate the matter by saying feminism is a movement. However I think there are too many different movements for us to define it in that way. A lot of movements exclude certain women based on their gender identity, profession or race. There are also differing ideas on what men's role is within a movement, if they have one at all. I don't like the idea of 'feminism' being like some exclusive club you have to try and gain access to. Beyonce is the perfect example; she comes out and identifies as feminist (which is unfortunately a pretty revolutionary step for a female popstar) and people are immediately tearing her down and saying she isn't one because of x, y, z. Again quoting the queen that is Chimamanda Ngozi Adichie: "if Beyonce says she is a feminist then she is".

Personally I believe it isn't the choices we make that are feminist or not feminist, but the reasons behind them. Choosing to be a stay-at-home mum because you love your children and want to be with them as much as possible is perfectly compatible with feminism. Having to be a stay-at-home mum because can't or you don't think you can do anything else, isn't. Being a sex worker because you enjoy it and want to be your own boss is compatible with feminism, being a sex worker because you don't feel you have anything else to offer in order to get money to live on, isn't. However even in the cases where the woman isn't making a feminist choice, it isn't her fault but society's and they deserve our help not our judgement. This filters down to a level I'm sure a lot of you reading will relate to; why we wear makeup. I try to make it clear that makeup is fun to me and a choice, however choices go both ways so it's also about not making other women feel uncomfortable about their choice not to wear it and addressing how society treats those women differently to me.

I also believe not only women will benefit from equality, but men. A lot of Men's Rights Activists (don't Google it, as it's just depressing...) don't realise that if they truly cared about issues such as domestic violence against men, male rape, custody, divorce etc. then they'd support feminism. The gender roles that feminism is trying to break down hurt men as well. The idea of men as strong, as full of testosterone and as providers is what fuels domestic violence and male rape not being taken seriously ('she's half your size, you could've stopped her', 'but men always want sex, right?') Child-rearing is clearly still seen as 'women's work' or women wouldn't be favoured in custody battles.

I think a lot of the time women and girls are turned off feminism because they feel shouted down, and I can see both sides of it because I've been on both sides! I think when you've first discovered feminism you may say some silly things that you look back and wonder why you held those opinions. And it would be helpful if someone just sat you down and explained nicely to you why what you said was problematic. However usually what happens is you get spoken to rudely and just end up upset and defensive. I can see why this happens as people often get tired of repeating the same things, so they become snappy or dismissive because at the end of the day you've said something that could've been really offensive. I think (within reason) we should take other girls new to feminism under our wing and appreciate that not everyone has had access to the information we have.

The fight for equality isn't over, and whilst women today in other countries or in the past have had it worse, that doesn't mean we can't do things in our own society to tackle passive or institutional sexism. There's not some rule that you can't care about more than one thing at once! For me the lack of female representation in Parliament is far from a throwaway issue. I hope this personal story/FAQ-type post has helped some of you! It's a very different post for me but I feel like if you have the platform you have the responsibility to use it!

In short: shave your legs, don't shave your legs. Get married, don't get married. Take your husband's name, keep your own, double barrel it: whatever. Just do it for you!

What does feminism mean to you?

Don't forget to enter my giveaway here to win a high-end palette of your choice from Urban Decay, Nars, Charlotte Tilbury or Too Faced!