NEW IN FROM HUDA BEAUTY 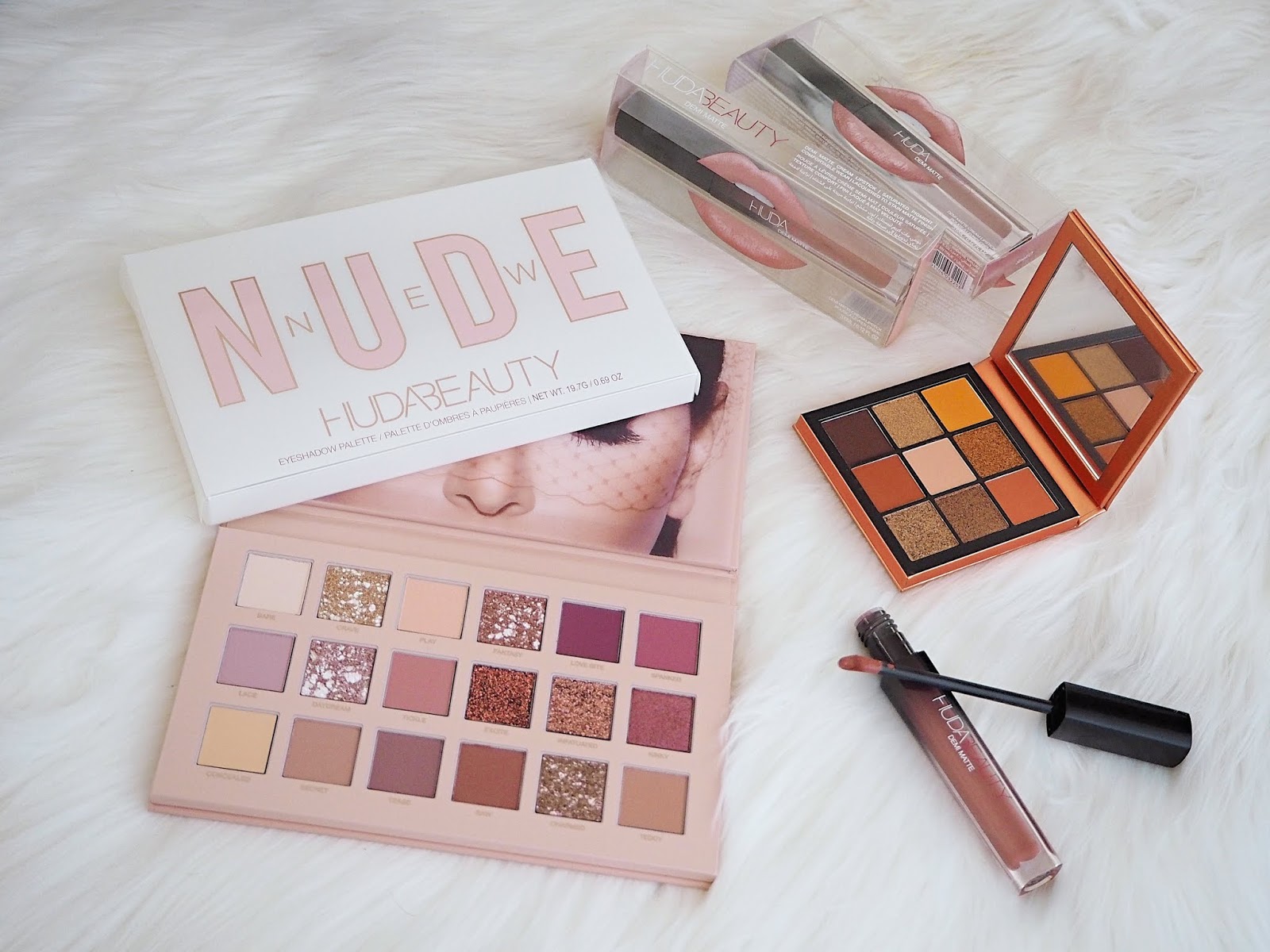 This time last year I think I owned a grand total of 3 of Huda's products. Fast-forward to the present day and my collection has snowballed! This November Huda Beauty is Brand of Month over on Cult Beauty and that means free worldwide shipping. There have been a bunch of new releases recently and I've tried a few of them out for you to review today, if you're in need of a bit of inspiration for your order...


Demi Matte Cream Lipsticks in SheEO, Feminist & Mogul* | £18 each | Ok, I was definitely confused by this product when it was first teased; the name said 'demi matte' but the swatches looked kind of glossy. I think 'lip cream' is a more apt description of this formula; it's opaque and pigmented but does have a slightly sheeny look. Don't be deceived by the swatches; this does dry down the longer you wear it. One thing I was a bit iffy on is that it's meant to be lip-plumping and I have bad memories of those tingly, burning glosses from the early 00s... However this just has a slightly minty effect - I wouldn't say it does much to my lips but it doesn't irritate them either, so it's a net neutral. I really like how comfortable these are; it's almost like a gloss for people who don't do gloss or a liquid lipstick for people who don't do liquid lipstick. Overall, I really like it! SheEO is a sort of brown-mauve, Feminist a pinky-brown nude and Mogul a richer rose tone. I won't lie; they're pretty similar but hopefully seeing them swatched side-by-side is helpful to you if you're trying to decide between these shades. I also love the empowering shade names! 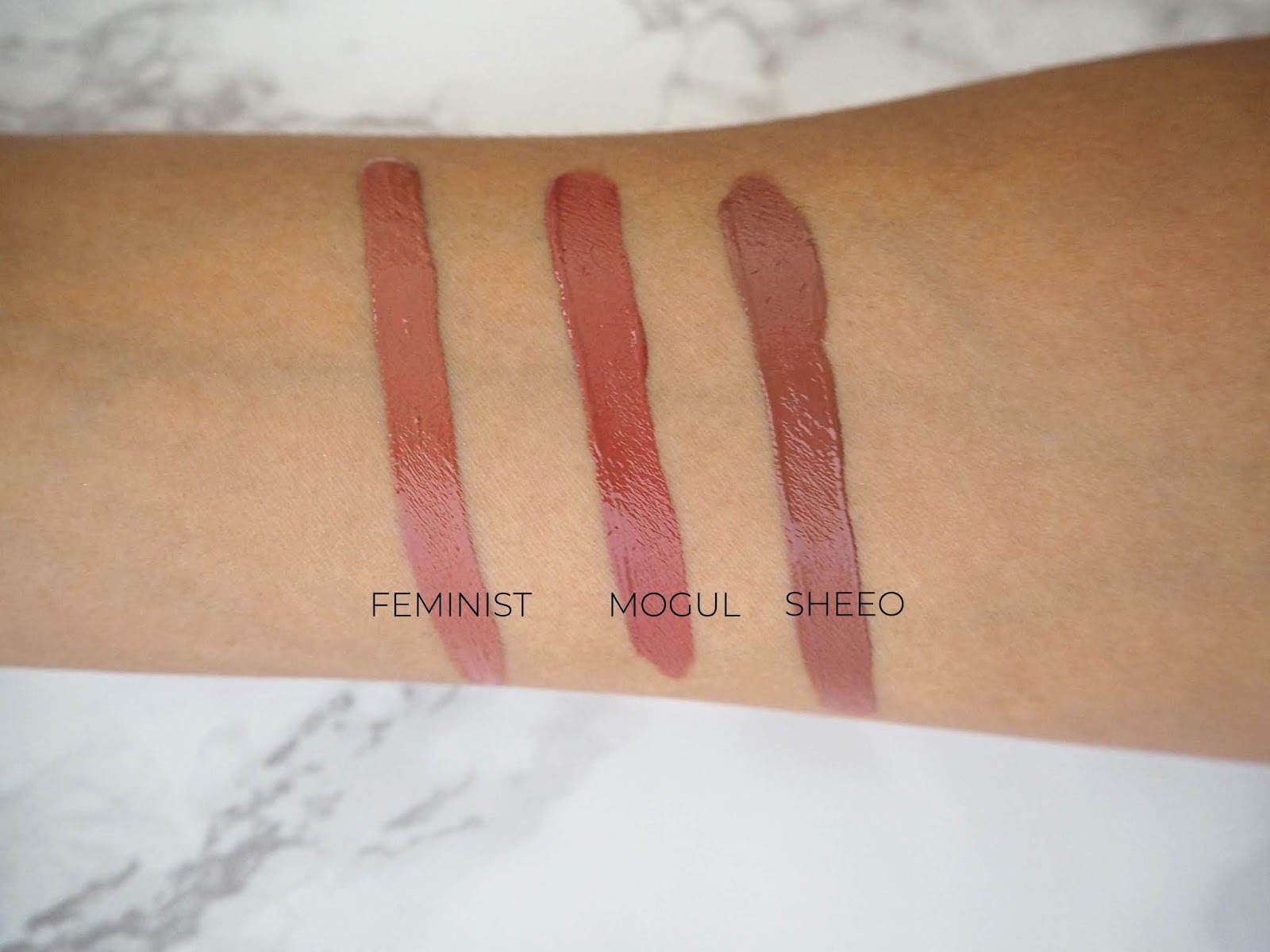 Topaz Obsessions* | £25 | Although the formulas vary wildly across the full-sized palettes I have from Huda Beauty (let me know if you'd like me to do some sort of comparison between the three), the mini Obsessions palettes are pretty consistent in my experience. I really love this matte formula - it has nice pigmentation that can be built up and blends out nicely. They're very long-lasting on me, which I also love. In my Coral Obsessions palettes, the shimmers were quite soft in their finish but the one shimmer in the Warm Brown Obsessions has this gorgeous foiled formula. The Topaz palette has several in the same foiled finish. They pick up nicely using an eyeshadow brush and have that lovely metallic effect once applied. which I really like! 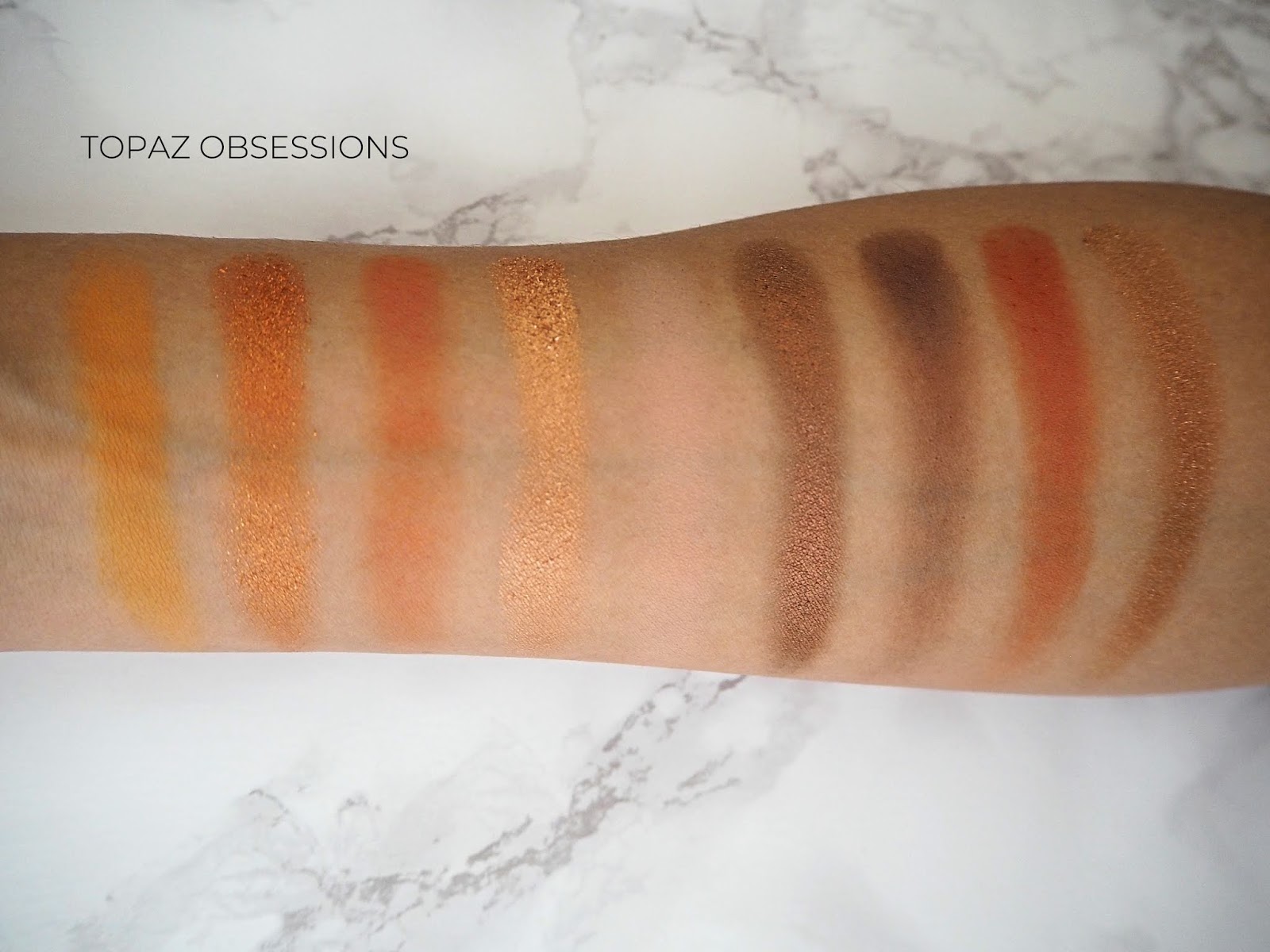 I actually think this could be my favourite colour scheme of these mini palette, as there's actually quite a lot of versatility in the shades. Obviously they're all warm oranges and browns but there's such a variety of matte crease and liner colours that have a nice gradient, from that light, slightly peachy tone to mid-toned oranges, to deeper browns and reds. I think the fact that this palette has more shimmers in it also helps me create more looks that are different to one another with it; there's an orange, a gold and a brown, and although none of these are really highlight tones, you still get that variation in terms of the depth. I honestly think these palettes are more user-friendly than her full-sized ones, and if you don't want to spend over £50 on a single eyeshadow palette, the Obsessions range (there are now a bunch of colour stories in this collection) is the perfect way to give this brand a try.

New Nude Eyeshadow Palette | £56 | Ok, this palette isn't going to be for everyone's makeup preferences and application techniques, but I can say upfront that I love it for myself! Firstly the colour scheme is stunning; I use every single (powder) shade in here and I'd say half of this palette is warmer with browns and coppers and half of it is cooler with some pinky and taupe shades. Personally, the richness of the colours means that even the cooler tones really work on my skin tone. I think the packaging is gorgeous and I love the romantic, sexier vibe (I hate calling inanimate things 'sexy' but I genuinely can't think of a better adjective in this case!) of these colours. It's both familiar and a bit different for me so Huda nailed the concept of a new take on classic nudes, as far as I'm concerned. There are so many textures and finishes in here and I'm genuinely excited to pick up this palette and create something!

I'm actually going to go through the shades first and then I'll talk a bit about the formula and how I like to apply the shadows in this palette. Bare is a matte bone colour - nothing exciting here! Crave is a duochrome light, frosty warm gold with what I want to say is a green shift (I've never seen a colour quite like it). Play is a matte light pink that I use as a transition colour. Fantasy is a stunning pink-purple duochrome. Love Bite is a deep true purple matte with a rich undertone. Spanked is a rich, rosy cranberry matte. Both of these are dark crease colours that can also be used as liners too. 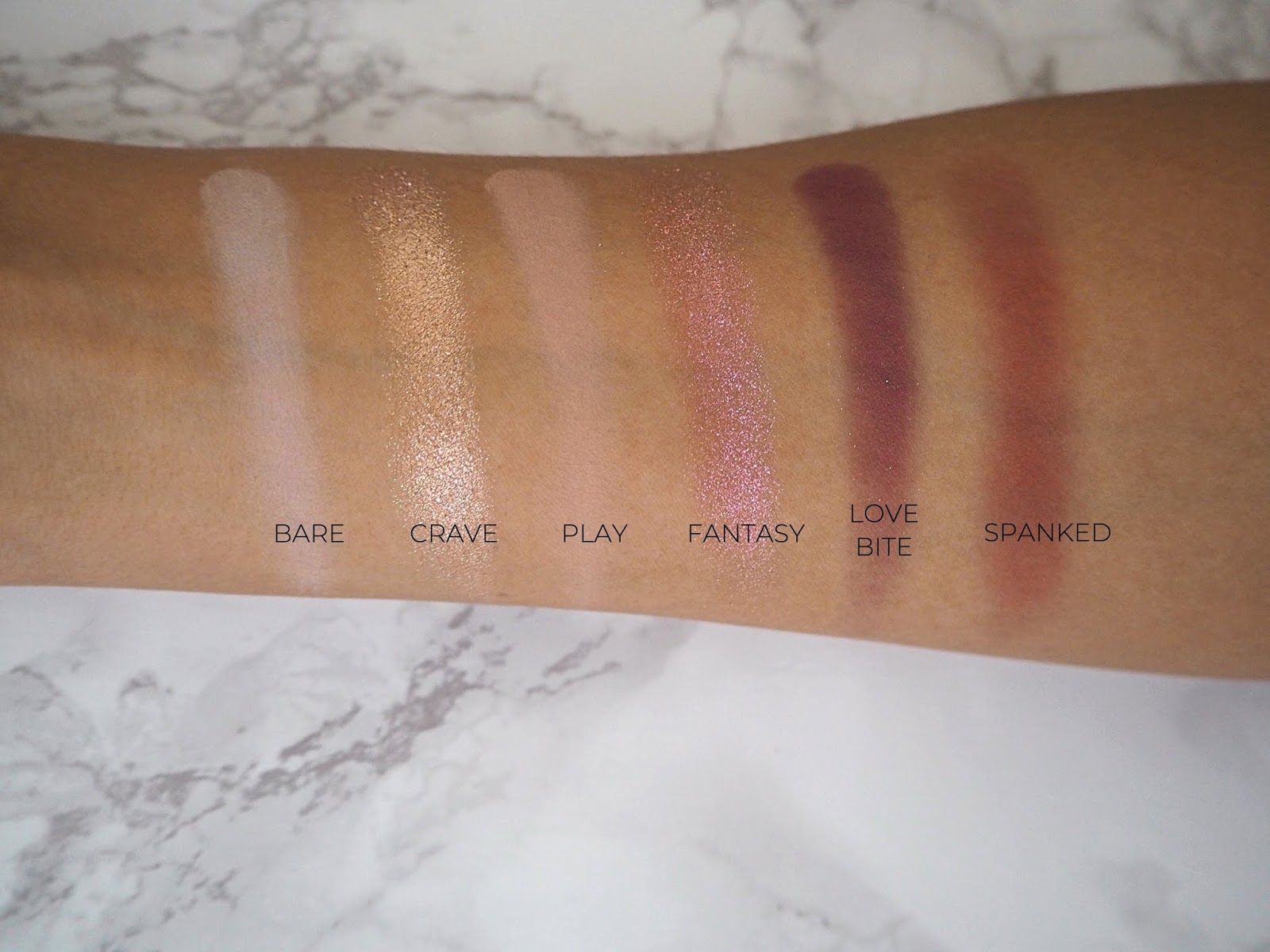 Lace is a lavender-toned matte crease or transition colour. Daydream is a lavender-to-pink duochrome. Tickle is a sangria-coloured matte - another crease colour for my makeup looks. Excited is pressed glitter in a warm red colour. Infatuated is a cooler purple pressed glitter with an almost bronze undertone. Kinky is billed as a 'pressed pearl' finish - it's essentially a rich reddish purple shimmer. 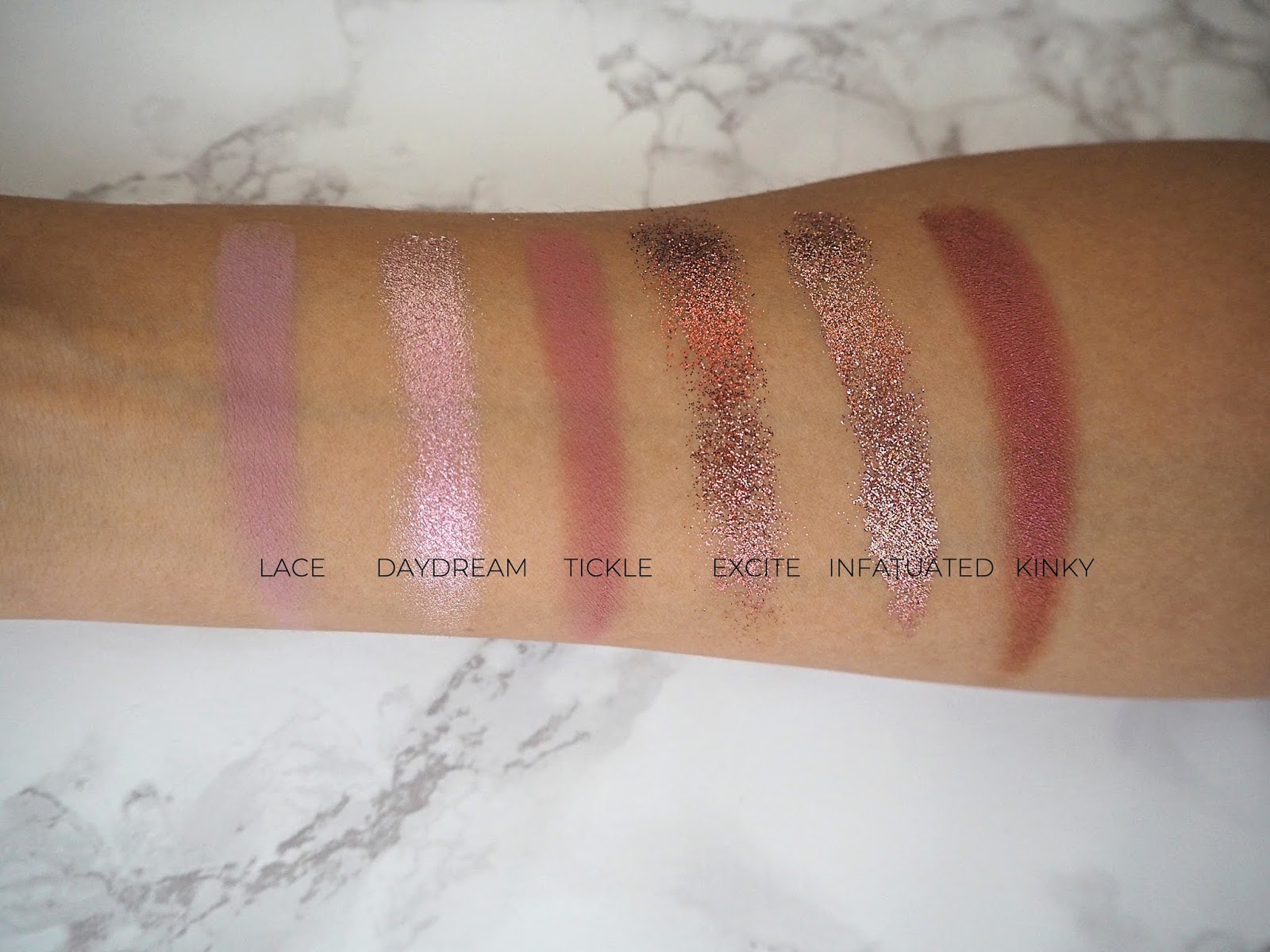 For the last row we have Concealed - a 'nude' (on light skin tones) cream concealer base. Secret is a dusty pink matte. Tease is a deep plum matte that I use to add some depth to the crease. Raw is more of a reddish-pink matte that I use in a similar way. Charmed is such an unusual colour; it's like a brown-purple duochrome, but not in the way you usually think of them, because this is very warm and almost bronze in its tone. Teddy is a warm dusty pink mid-toned matte. 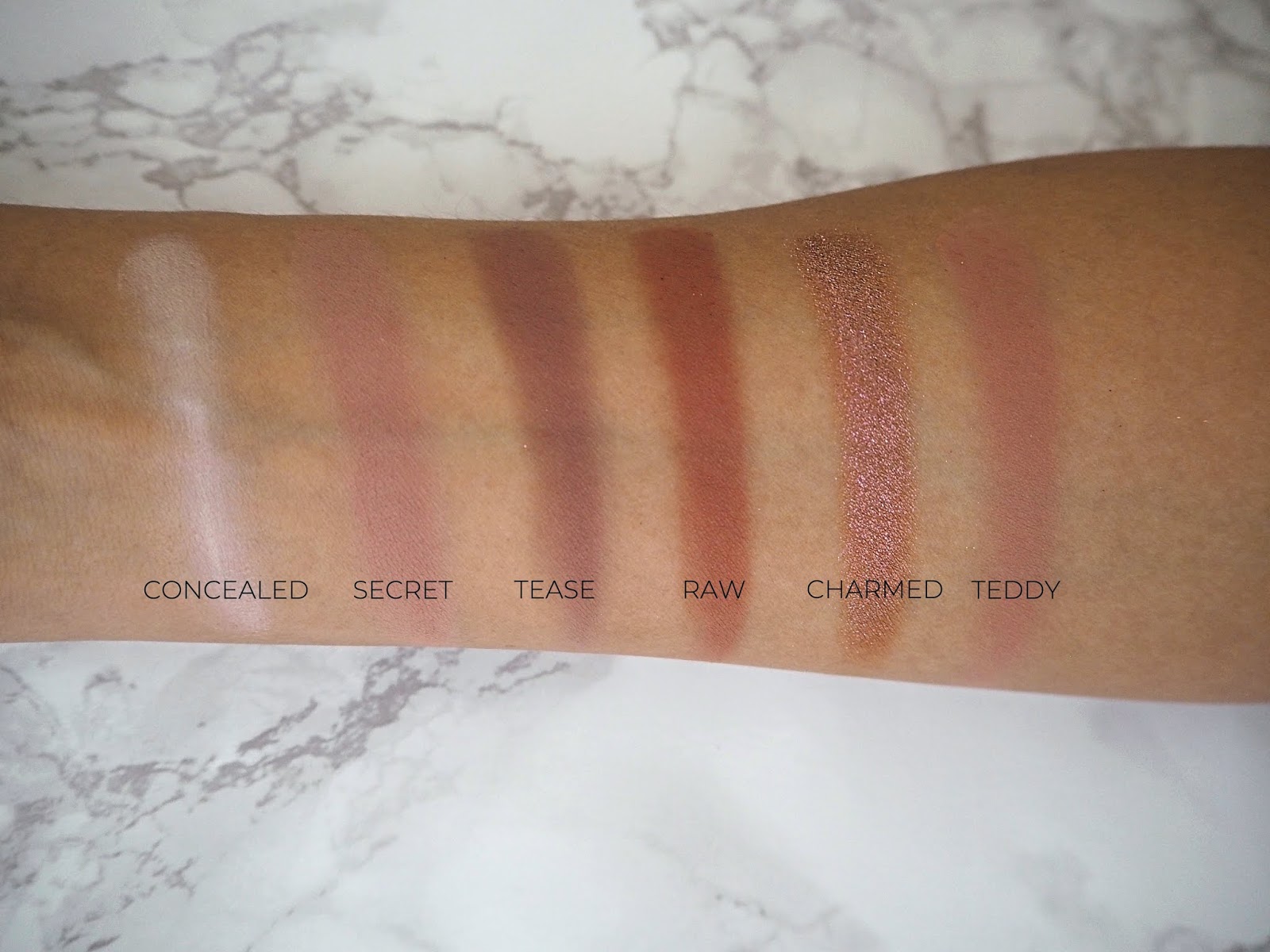 Ok, let's dive into the formula... The mattes are pretty straightforward and I find these fairly consistent across Huda's palettes; overall they're very creamy, opaque and pigmented, plus blend like a dream. They do kick up some fallout in the pans but not really once I start applying them to my lids. The darker shades tend to be a tad drier (I noticed this with the two darkest shades in the palette) but are still very opaque; I tend to only use dark shades in the outer crease or to line with, so it doesn't bother me much but is worth noting if you do your makeup differently to myself. They're incredibly long-lasting, which is one of my favourite things about them.

The pressed pearl formula is really lovely - I kind of wish we had more of it! It's a very pigmented, very smooth shimmer that's stunning and so easy to work with. It has a soft metallic finish.

There was such a hoo-hah over these duochromes! Personally I love different textures and finishes in a palette; they make me want to dive in and play. Before this was released or sent out to influencers people were freaking out that these were chunky glitters and 'couldn't possibly be eye-safe'. I don't know if they were genuinely just seeing something very different to the majority of us or if they were being dramatic to stir the pot a bit! This 'meteorite' look effect is just a visual - these come off as smooth, foil-effect duo-chromes. I definitely think you get the most impact applying them with your fingers. I personally don't mind that; I actually kind of like it, but I know that for a variety of reasons such as having long acrylic nails, some people may not be into that. I think overall; if you aren't ok with applying shadows using your fingers, most of Huda's full-sized palettes won't be for you. You just can't pick up that full pigmentation with a brush, and I've tried with a few different types - the only alternative I can think of to fingers is a sponge applicator (which I've seen some people use this with on YouTube).

The concealer shade being in here is a bit of a misstep for me - I think this colour should either have been a powder or (even better) have been replaced with another pressed pearl then a primer be sold with the palette in a separate tube. It won't work for all skin tones and I don't like creams being packaged in with powder products because it's just going to get messy (especially with the fallout these mattes can produce). I think if you like to prime your eyes with a concealer, you probably already have plenty of products that work for that and, for me, this is just a bit average.

The pressed glitters are my least favourite thing in this palette because they're so loosely-packed. I definitely think pressed glitters can work in palettes but they do have to have a bit of a base to get that smooth application. The formula definitely has some sort of adhesive substance in there but I personally didn't have much luck with these as they just didn't stick and weren't opaque. I have a few other glitters I've been using lately so decided to pick up the NYX Glitter Primer | £8 | and give it another shot. As you can see from the below swatches; it layers far better and just sticks to the skin more readily when this primer is used. They still aren't totally opaque so I layer down a matte colour as a base before using the primer and then I press the glitter on with my fingers. There's definitely fallout when I apply this (so I'd recommend doing this step before applying your base makeup) but I was impressed with how it holds up throughout the day! Although it migrated into my crease a little, I didn't end up with glitter fallout all over my face. I personally think these shades are near-unusable without some sort of glitter glue or primer, so bear in mind that my opinion of them is how they apply and wear when I use the NYX. You can makes these shades work with a bit of help, but at the end of the day; this palette is £56 - I shouldn't have had to go out and spend another £8 for these shades to be useable! 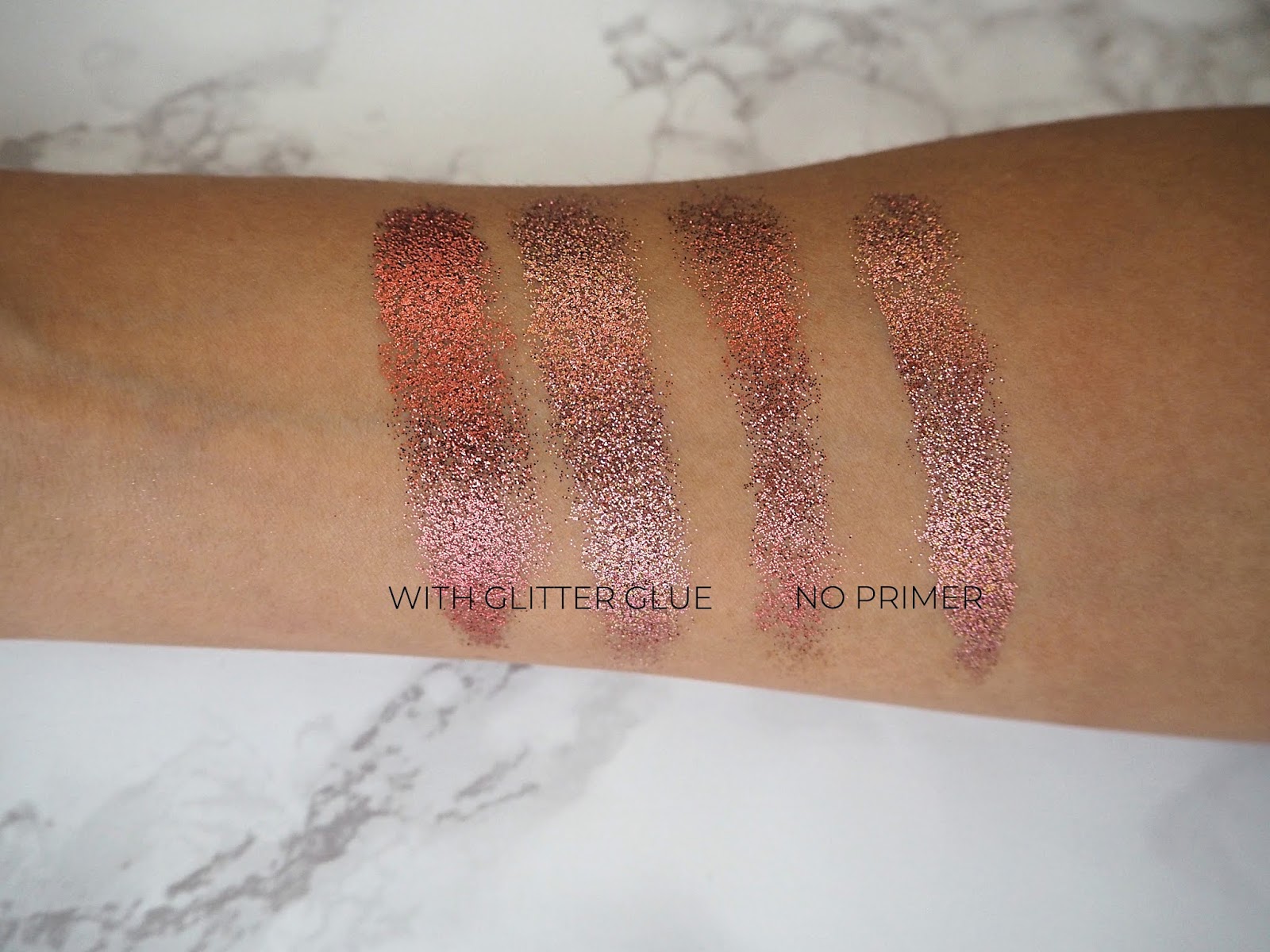 This palette isn't without its flaws. I personally love using it and the looks I can create with these tones but you have to think about your own personal makeup preferences and whether this would work with them. Hopefully this post was useful in helping you make up your mind!

Do you think you'll pick up any of these new launches this month?

Disclosure - products marked * were gifted to me as unpaid advertisement for the brands / websites mentioned. All opinions expressed are my own. Please read my disclosure page for more information.