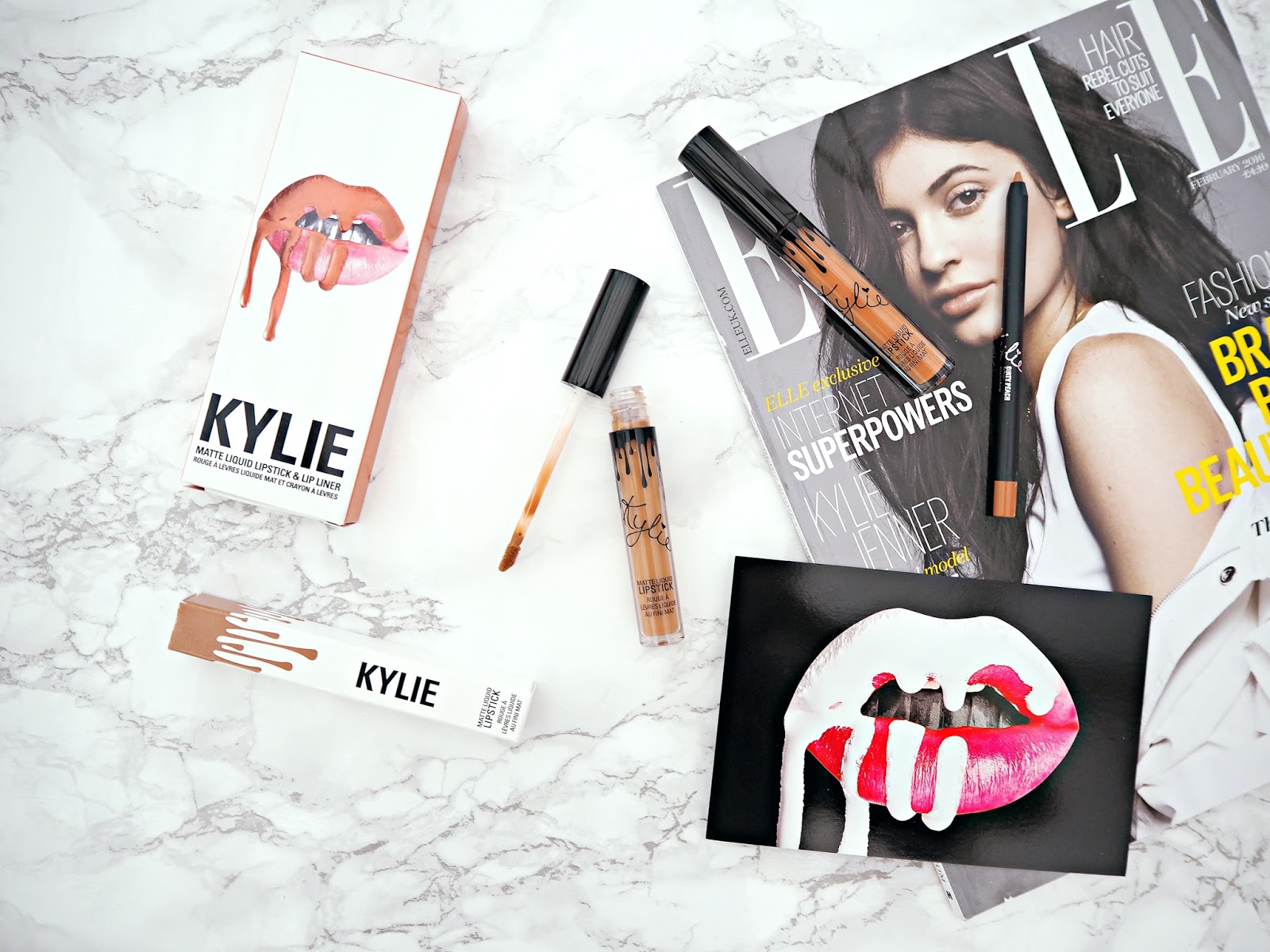 The little voice in the back of my head has a lot to answer for, not least when it comes to beauty purchases. 'What if it's as good as they say?' 'You should probably try it for yourself though'... Today I'm talking about what it made me do one night after a couple of glasses of wine: make a Kylie Cosmetics order! I got myself the Dirty Peach Lip Kit ($29) and the Exposed Liquid Lipstick ($17).

Personally I don't really care about the Kardashian-Jenner clan - they're a bit annoying given that they're *everywhere* but I don't hate them or think they're all that's wrong with society. On the flip side I'm not a fan either. So I guess I went into this without an agenda. There's been a lot said about Kylie Cosmetics that totally put me off ordering during the first few months after the first few products were launched. People were having empty boxes show up, faulty applicators, customer informations leaking, orders taking weeks and weeks to show up. You name a controversy and Kylie Cosmetics had had it! However in recent months things seemed to have quietened down so I considered placing an order. It wasn't until recently that I found two shades that appealed to me and weren't just like every other nude liquid lipstick I owned (the original shades are honestly SO dupe-able).

The ordering process was fine for me; it seems like each time they do a release of these, they become easier to get hold of. In the first few months you had to be there refreshing the page over and over again! Now you can pretty much go on the website at your leisure and most of the shades will still be in stock. I placed my order (the shipping was $14.95) without any difficultly and it showed it two weeks after. There was a customs charge which I'd been expecting - I believe it was around £14 including the annoying Royal Mail handling fee. Everything was in order and I didn't have any problems in this respect.

The packaging seems to have become so iconic that it's almost not worth going into detail on. The Lip Kit box has the 'Kylie' logo with the signature lips coated in the colour of the product inside. The individual Liquid Lipstick is obviously much smaller and only has the dripping product effect with the colour of the product on it. I don't have any complaints on the actual tubes; they again have the drip effect and I haven't noticed the writing rubbing off. They both have a doe-foot applicator and the product seems reasonably weighty, though still perhaps a bit cheap for the cost. Exposed has the old standard doe-foot applicator (which I prefer by a mile) whereas the newer shade Dirty Peach has the updated, 'fluffier' version (which I find makes application messier). The pencil I ordered is what it is, though it's worth noting that you have to put the lid on quite firmly for it to stay in place.

This is where it all falls down for me! In case you weren't aware; there have been several issues flagged regarding the formula of these. It has been noted by diligent YouTubers that there are several different versions of the original shades and it seems to vary with each release. The second observation is that the formula is very similar to the $6 Ultra Matte Lips from ColourPop and rumour has it that they are manufactured in the same factory and have some of the same business bigwigs behind them. Make of that what you will... Although the formulas are similar, all the reviews I've read and watched did state that the ColourPop offering has several more ingredients so they are by no means the same, though that isn't necessarily a compliment!

They have quite a fluid formula and are very opaque in colour. When they set down, they actually don't feel too drying on my lips; there's a slight tackiness that stops them feeling like too much. What I don't like is that they seem to settle into every little wrinkle on my lips (I wasn't aware until trying these that I had particularly wrinkly lips!) so even if they don't feel that drying, they do look dry. But for me the total deal-breaker is the flaking! People want to say the ColourPop Ultra Matte Lips are essentially the same product however although I do find those drying, I haven't experienced flaking. I can't wear these lipsticks on a normal day when I'm eating, drinking and going about my daily life without it flaking and me feeling self-conscious about it. They just end up looking a mess by the end of the day and I can name 20 liquid lipstick formulas out there that are far better than these. I honestly don't know how a normal person can go through their day without ending up looking a mess using these liquid lipsticks! Maybe there's some special technique people use to apply these (though I can't think what that might be...) but to me, I don't have this issue with other liquid lipsticks, some of which cost as little as $6 so I don't expect to have them with these. It's not a dud batch issue either because clearly from the difference in applicators, I have two products from different batches.

On a more positive note, the liner is really nice; it's very creamy in texture and is so comfortable it can even be worn on its own. It isn't the longest-wearing but overall I do really like it, so if you fall for a colour from this range I'd recommend just getting the liner in all honesty.

Exposed is a light-medium warm nude shade that I can *just* about pull off without it looking like I put concealer on my lips! It wasn't what I expected because I thought it would be a darker shade, however I do still like it.

Dirty Peach works much better for me; it's a light-medium peachy nude, as the name suggests. It's vibrant in a way and really pops when you've got a bit of a tan. Overall I really like the colour and think it's a unique addition to my collection. 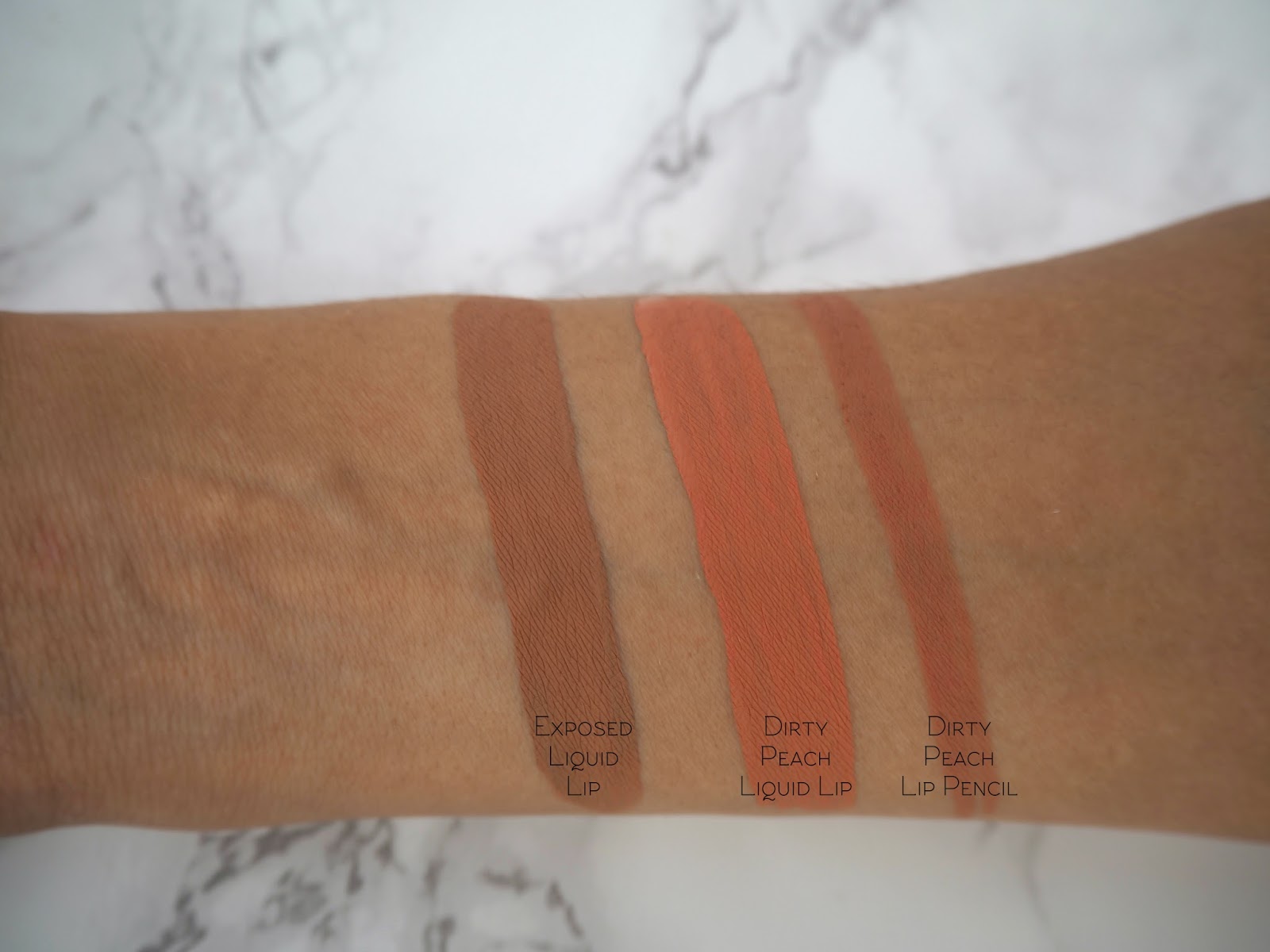 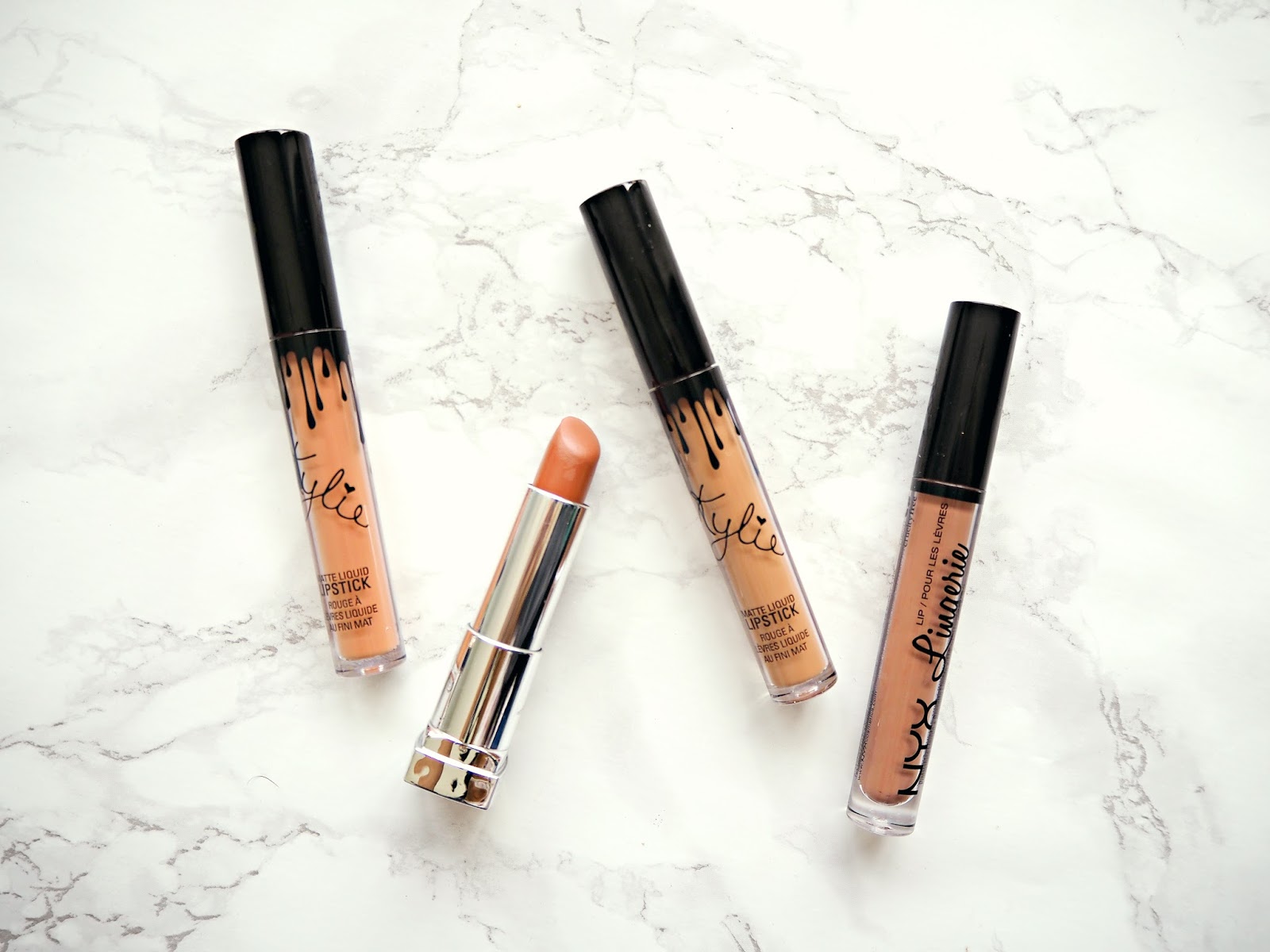 My alternative to Exposed is the NYX Lingerie Liquid Lipstick in Ruffle Trim (£6.50). Ok, this isn't my favourite liquid lipstick formula but it's still better than the Kylie one! It's a tad drying but it does have the pigmentation and the longevity, plus doesn't flake. As you can see, it does have slightly pinker undertone as opposed to Exposed, which has a sandy colour to it. However they look similar once applied and Ruffle Trim is a fraction of the price (plus you can simply find it in your local Boots). 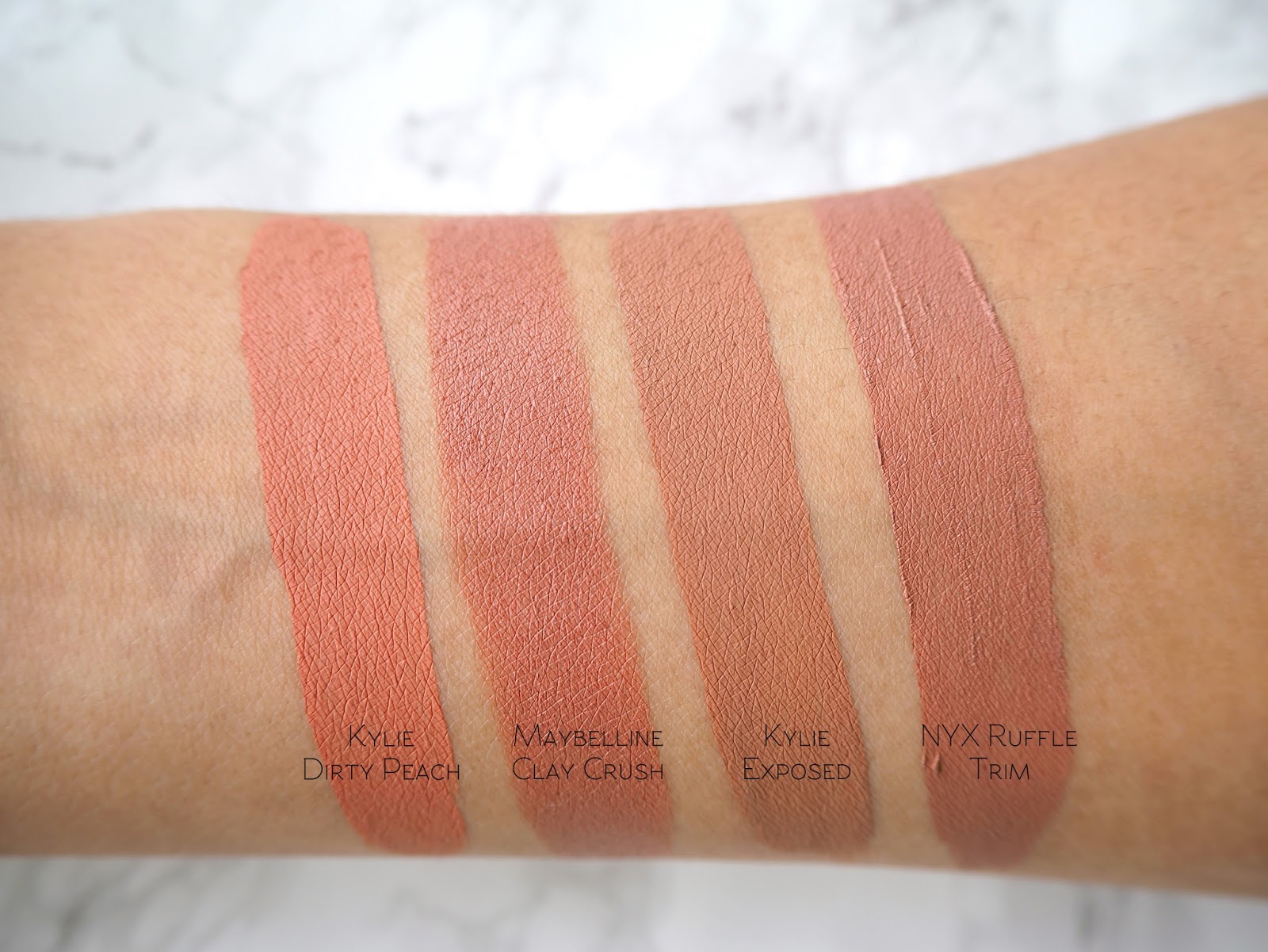 I won't lie; I found it so hard to dupe Dirty Peach! One of the reasons I got it was because it was different to anything else I own, however I've found a colour dupe in my stash that give a similar look (though obviously this is a traditional lipstick as opposed to a liquid formula). Maybelline's Creamy Matte Lipstick in Clay Crush (£6.99) has more of an orange-brown undertone but is actually pretty similar to Dirty Peach. Although it's not the most opaque formula, it still wears well and doesn't dry out the lips at all.

So, are they worth the hype? No! And I almost knew it when I bought them, but curiosity got the better of me... I was expecting them to be 'ok' but not great, however they turned out to be some of the worst liquid lipsticks I've tried!

Have you tried the Kylie Lip Kits? What did you think of them?